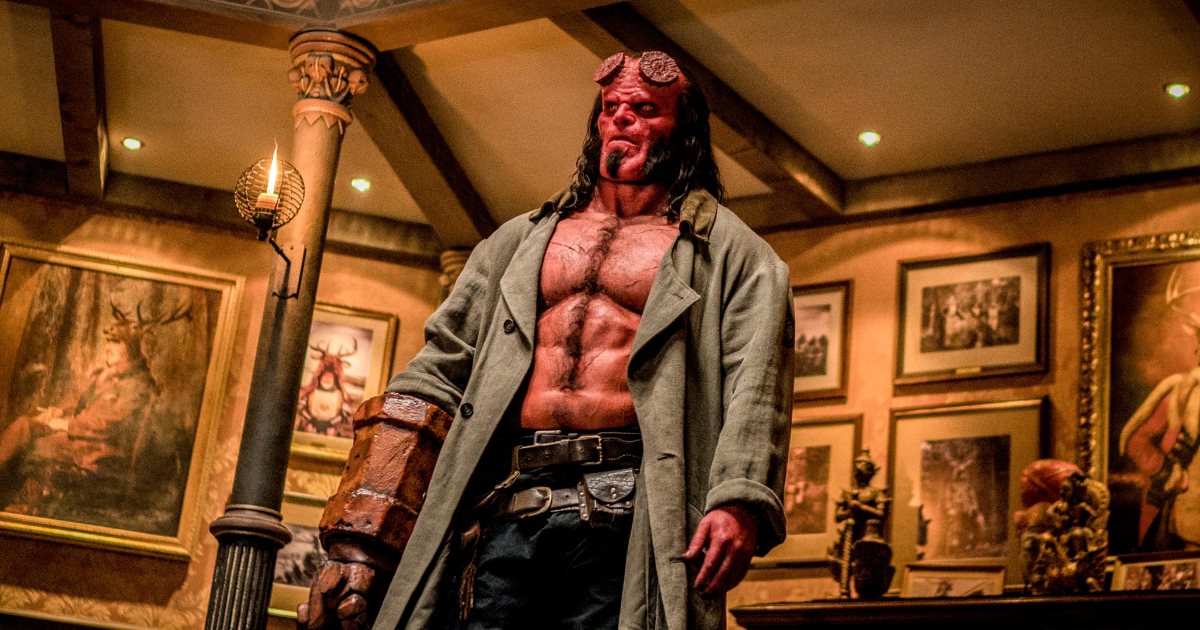 The landscape of the horror-action-fantasy genre had changed dramatically in the ensuing decade and a half.

“With the success of these we felt there was an opportunity to push the movie in a more mature direction: more graphic, more visceral, more exciting, and thematically, a little more adult. After all, the Hellboy books suggest an R-rating and we wanted to do something a bit more faithful to Mike’s work.”

When it came to deciding on a plot, the filmmakers were faced with an embarrassment of riches.

Published over more than 20 years, the Hellboy series boasts the most issues under the direction of one person among all currently published comic book series.

Ultimately, the producers gravitated to 2010’s Hellboy, Volume 9: The Wild Hunt, an anthology that includes issues #37 to #44 of the series, as the central thread of story. In addition to being an exciting, high-stakes action epic, The Wild Hunt reveals Hellboy’s dramatic origin story.

The film also pulls from Mignola’s other books, including a memorable sequence inspired by Hellboy in Mexico, along with some material written specifically for the film.

The script is a true collaboration between Mike Mignola and Andrew Cosby.

Reading Dracula at ago 12 introduced Mike Mignola (Comicbook Creator/Executive Producer) to Folklore and Victorian Supernatural Literature from which he has still never recovered.

He began working as a comic book artist in 1982, working for both Marvel and DC Comics before creating HELLBOY, published by Dark Horse Comics in 1994.

What began as a single comic book series would eventually expand to a “Hellboy Universe” of related graphic novels, prose novels, short story anthologies and both animated and live action films.

He also wrote and drew The Amazing Screw-On and Other Curious Objects.

He has co-written novels with Christopher Golden (Baltimore, or, The Steadfast Tin Soldier and the Vampire) and Thomas Sniegoski (Grim Death and Bill The Electrocuted Criminal), worked with Francis Ford Coppola on Bram Stoker’s Dracula , was a production designer on Disney’s A tlantis: The Lost Empire , and visual consultant to Guillermo del Toro on Blade II , Hellboy and Hellboy II: The Golden Army .

Mignola’s comics and graphic novels have earned numerous awards and are published in a great many countries. He lives in Southern California with his wife and a very demanding cat.

A prolific screenwriter, producer and comic book creator, Andrew Cosby’s (Screenwriter) career was jump-started in 2001 with his first television series, “Haunted.” This was soon followed by Syfy’s “Eureka,” which ended its five-year run with a record-breaking season in 2012.

In 2005, Cosby created his first comic book, Damn Nation , which was immediately set up at Paramount Pictures with Cosby attached to write and produce.

Since then, he’s been involved in numerous other feature film projects and even founded the award-winning BOOM! Studios, which has since gone on to become the sixth largest comic book publisher, producing Universal Pictures’ 2 Guns based on their graphic novel.

Currently, Cosby is launching a number of new series and film projects, including an animated series for Netflix.

He also sits on the board of the world’s first fan-owned entertainment company, Legion M, and serves as Head of Creative for a major motion picture production, distribution and acquisition fund.

Mignola remained involved in the process throughout, reading each successive draft to ensure the screenwriter stayed true to the character.

“It was important for us, and for the fans as well, to really stick to the roots and origins of Hellboy,” says producer Les Weldon. “No one wants somebody else’s Hellboy — they want Mike’s. It felt almost like we were doing a biographical or historical movie. Source material is key. We had Mike, and I think it really, really paid off.”

Mignola’s involvement was especially important because while many of the scenes and much of the dialogue comes directly from the comic books, Hellboy is an amalgam of the series’ storylines rather than a direct adaptation of one of the books.

“I’ve been doing Hellboy for 23 years,” says the author. “There’ so much material, and I’m kind of the only guy who knows how all of the pieces fit together. So, the screenwriter would come to me and say, ‘Here’s a story, and here are some pieces, and let’s put them together.’ My job was to say, ‘I see what you’re doing, but I don’t think you fit all of the pieces together quite right,’ or, ‘We need a thread that connects this to this’ or, ‘Instead of this piece, let’s put in this piece.’ In the end it’s taken pieces of so many of my stories and fit them together in a way that really works.”

The film also expands the scope of Mignola’s work by bringing Hellboy’s world fully into the 21st century, according to Levin. “Throughout Mike’s stories there is a real sense of the past,” he says. “Even when they’re set in present day there’s kind of a feel of ancient times or a bygone era. Working together with Mike we discussed how to give this film a contemporary feel and a contemporary setting that really grounds it in the now. So in addition to the forests and other primal settings from the comic books, our story takes place in contemporary urban London.”

Going Dark To fulfill their goal of bringing Hellboy into the present day and giving it a more horror-centric, R-rated sensibility, the producers knew they needed a director with the right mix of serious genre chops and the experience to oversee a production teeming with spectacular characters, interwoven plotlines and big action set pieces.

They were all impressed with the breadth and depth of Neil Marshall’s work, from his deft handling of episodes of blockbuster HBO series “Game of Thrones” and “Westworld” to his feature The Descent , which Levin calls “one of the best horror films of the 21st century.”

“We wanted a director who could handle both horror and action, and also be strong with character — in particular, that dry, near-gallows humor that often comes out of Hellboy,” says Levin.

“Our intent was to set this film squarely in our world, rather than have it be fantasy with a capital ‘F.’ Neil’s work very much reflected that.”

Mignola was on board with the choice from the start. “When Neil’s name came up, we instantly thought, ‘Oh, okay, we have a guy who can deliver a darker, more grounded version of Hellboy .’ I was really excited.”

Marshall admits he hesitated when he was first approached about directing the next Hellboy film. “My initial response was, ‘Well, that’s somebody else’s terrain, and I really don’t want to step on their turf.’ But after a little time passed it became apparent that the producers wanted to create a new version of the franchise. I said, ‘Great, let’s do it.’”

The director says he felt the weight of responsibility to the franchise’s fans as well as to Mignola and the producers to get it right. “Larry and Lloyd had carried the torch for this for quite some time. So, the question was what could we do that would reinvent it some way that isn’t radically deviating from the source material — and in some ways would be more faithful to the source material? I saw a lot of potential in a darker version. And Mike and everyone else connected with that concept as well, so it was like, ‘Okay, let’s go dark with it.’”

For Marshall, that meant delving into some edgy places with the characters and their stories. “It’s a huge emotional journey for Hellboy, a journey of discovery, and then just literally, we’re going darker: bloodier, more violent. But it’s not a matter of throwing in things that don’t belong. It was always a case of, when in doubt, go back to the source.”

With its rich mythology, compelling storyline and spectacular visuals, Hellboy evokes a wide range of thoughts and emotions for the members of the cast and crew.

Actor Daniel Dae Kim is moved by the film’s exploration of fate and redemption. “What is heaven and what is hell, and what should one be punished for and what can one do to get beyond their destiny?” he ponders. “These are all interesting questions to me, and they’re the questions that Hellboy and my character both ask. But I also think that, given the cultural climate out there today, Hellboy might be a little escape, and that isn’t such a bad thing.”

Mignola marvels at his character’s longevity and expresses his gratitude to fans for their continued interest in Hellboy’s adventures. “I am so amazingly lucky,” says the author. “Having created, not a traditional superhero, but a red guy with a tail from hell. To see that character embraced like it has been for something like 25 years is pretty great.”

Having shepherded, along with producing partner Lawrence Gordon, Hellboy ’s onscreen presence for nearly two decades, Levin is thrilled that this new incarnation reveals Hellboy in an entirely new light. “And that is largely thanks to David Harbour’s performance,” he says. “He’s a much more empathetic character than anyone is expecting.”

Marshall concurs: “David gave such a great take on the material. I would love audiences to walk away feeling they have seen an original Hellboy movie.”

And Harbour? He wants people to know that having a tail is definitely not all it’s cracked up to be. “The tail is a pain in the ass,” he says. “I remember, we had this day on set. I’d done this big scene, with fighting and stunts, and I’m slumped over, and the camera guys are like, ‘Um, well, your tail…’ I’m dealing with the hand, I’m dealing with the suit, I’m dealing with this whole thing! And my tail doesn’t look right?! I know you all think you want a tail. You really. Don’t. Want. A tail.”