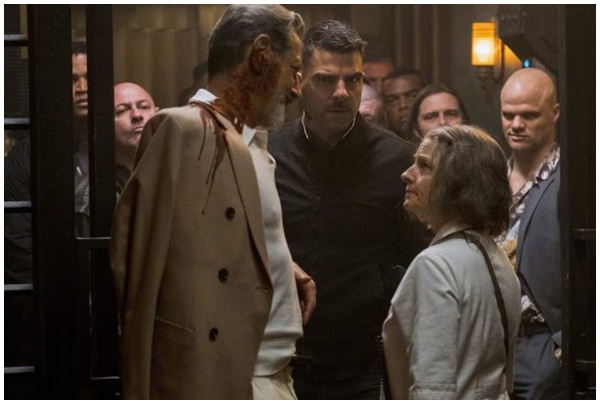 An emotional love for Los Angeles – as a land of opportunity, lawlessness and rich cinema history.

Writer-director Drew Pearce, until now best-known for his work as a screenwriter (Iron Man 3), makes his feature film directorial debut with Hotel Artemis, a scret hospital for criminals in riot-torn, near-future Los Angeles.

Back in the 1920’s, penthouse suites at the fictitious Hotel Artemis were named after popular vacation spots. A century later, all guests are codenamed using the names of those suites, reflecting the Artemis’s commitment to anonymity, along with its state- of-the-art emergency care.

The 13-story art deco structure lost its cachet with the traveling public long ago, but thanks to funding from Malibu mobster The Wolfking (Jeff Goldblum), the hotel’s worn exterior cloaks a state-of-the-art hospital on the penthouse level. This is a members-only E.R. exclusive to one group – criminals. Dues are paid in advance and all house rules must be followed.

A no-nonsense woman everyone calls The Nurse (Jodie Foster) has run the place for 22 years. The Nurse is a high-tech healer who can handle almost anything – except the outside world.

When an injured cop (Jenny Slate) begs to be let in, The Nurse to break her own rules… she must confront everything she’s worked so hard to avoid for 22 years. All while, in her words, “the night goes to hell in a handcart full of blood and sh*t”.

Drew Pearce is a British-born writer-director-producer, is best known for co-writing Iron Man Three for Marvel Studios, and for his work on movies such as Pacific Rim, Godzilla and Mission: Impossible – Rogue Nation.

Pearce also wrote and directed the celebrated Marvel One-Shot: All Hail the King.

To date, the movies that Pearce has contributed to as a screenwriter have grossed more than two billion dollars in worldwide box office. Before moving to Los Angeles, Pearce created the award-winning U.K. series

“No Heroics,” a sitcom about unsuccessful British superheroes and their R-rated, off-duty exploits in The Fortress, a heroes-only pub. The show was nominated for a British Comedy Award, which led Pearce to shoot a U.S. pilot in the spring of 2009 for the ABC Network.

Pearce’s break into movies came in 2010 when Marvel hired him to adapt Runaways. The following year, Marvel announced that Pearce would co-write Iron Man Three with director Shane Black. In addition to his later work on Pacific Rim, Godzilla and Sherlock Holmes 3, Pearce also created The Billion Brick Race: A Lego Movie for Warner Brothers, on which he partnered with Jason Segel. In his spare time, Pearce directs music videos for rock artists such as Father John Misty, Miles Kane, and The Last Shadow Puppets.

Drew Pearce imagined the specifics of this near-future world in great detail, and its roots lie in his fascination with the city of Los Angeles.

Writer-director Drew Pearce imagined the specifics of this near-future world in great detail, and its roots lie in his fascination with the city of Los Angeles. “I’m originally from Scotland, and lived in England most of my life,” said Pearce. “After our first extended stay in L. A. (on Iron Man 3), my wife and I knew we wanted to move here permanently. We took the leap, packed everything we had in a container, and got on a plane. We’ve been here close to seven years and have never looked back.”

Coming of age in an old European city influenced Pearce’s experience of L.A. “I love that the short history of the city, compared to London’s, makes its history more accessible. In the Artemis, you can see a hundred years of life in one building, and the layering of that history is physically visible all at once – just like the city itself.”

“Los Angeles has a distinct personality,” he continued. “Someone once called it a city of doorways, because unlike the East Coast or Europe, you have no idea what the inside of a place will be, based on its exterior aesthetic. The fanciest restaurant might sit behind a door in a rundown strip mall, and there’s something exciting about that to me. It’s reflected in the Artemis, which is definitely a movie of doors.”

Or as producer Adam Siegel described it, “a world we look at through a keyhole.” Jodie Foster liked the feeling Pearce evokes.

“I grew up here,” noted the Academy Award®-winning actress, who began her career at the age of three. “There’s a nostalgia about Los Angeles in Hotel Artemis that I share with Drew. The film has an emotional love for the city – as a land of opportunity, lawlessness and rich cinema history. Drew has created something so original, so disarmingly visual that you see Los Angeles with an entirely new lens. The film definitely has a thriller aspect,” she suggests, “but it inhabits its own world. It’s genre-bending.”

Sterling K. Brown, who plays Waikiki, agrees. “It’s simultaneously noir and futuristic; funny, but with pathos. We’re in an interesting environment that reveals not all criminals are created equal.” Many agendas are in play at the Hotel Artemis, and some overlap. “The stories thread together, and also tangle,” said producer Simon Cornwell.

““Secrets are revealed and scores are settled,” added his brother and fellow producer, Stephen Cornwell. “Not everyone can get what they want.” Whatever the details of their situations, the film’s criminals have one thing in common.

Says Brown: “We gotta get in, get off the grid, get away from law enforcement, and then get out.”

The tightly paced story unfolds in one out-of-control night, but Pearce took his time crafting the tale.

Actively seeking to direct his own work, he carefully weighed which of his ideas would be the one to make that happen. “This idea refused to leave me, and hit all my sweet spots,” he now reflects. “There’s crime, there’s sci-fi, and there’s the chance to do something visually stunning baked into the DNA of it. Plus, there’s the simple hope to make a movie that does justice to the city I now live in – Los Angeles.

“At the time I committed to it, I promised myself I’d write the purest version of the idea, which meant it would be an indie, rather than a studio film,” he revealed. “There’s not a day that I regretted that decision. I’m proud of the process and the people who have jumped on board with the same attitude. “I wanted it to be a melting pot of ideas and themes – always laser-focused, but with as much depth as possible, like the best crime and near-future sci-fi I grew up with.”

The inspiration for the Hotel Artemis came from the past in the shape of obscure singer-songwriter Elyse Weinberg and this late sixties California sound ripples through the story and the soundtrack.

“The Nurse is a Laurel Canyon lady at heart,” said Pearce “and that’s important to the movie, because it’s music from a much happier time in her life. It’s a safe place for her – like the Artemis itself. So, it was important to surround her with her own music – from her trusty turntable that spins the Mamas and Papas each morning to the portable ‘tape’ deck slung around her neck that soothes her with Buffy Sainte-Marie’s ‘Helpless’, it’s her very own personal soundtrack.”

To shape the wider sound of Hotel Artemis, Pearce went straight to the top, commissioning acclaimed composer Cliff Martinez to create the score. Producers Marc Platt and Adam Siegel had collaborated with Martinez on the energetic, and now iconic, score for Nicolas Winding Refn’s LA-set Drive in 2011, so Pearce knew that the composer could deliver momentum and modernism – a dynamic foil to the lush nostalgia of the Nurse’s playlist.

“I needed the score for Artemis to be both tense and emotional – hard enough to denote the future but romantic enough to invoke the past of the hotel itself” said Pearce, “Cliff was my first choice because his work manages to combine modernity with real heart. He’s a maestro in his field, and the music he made for the movie was the final, beautiful piece of the puzzle.”

To close out the film, Pearce turned to close friend and collaborator Father John Misty a.k.a. Josh Tillman who also has a cameo in the film as bank robber, P22, alongside Buke (Kenneth Choi).

In 2015, Pearce directed the music video for Father John Misty’s “The Night Josh Tillman Came to our Apartment” a sardonic look at a night of debauchery in LA, and knew that the singer-songwriter’s uniquely wry yet lyrical sensibility would be the perfect blend of old and sharply contemporary needed to play the film out, “

Josh and I talked for a long time about what the song could be – how it spoke to the ideas in the movie, how it would be unique to us. One of the themes shared by all of our characters they’re all trapped, both literally and figuratively… hence the idea, and title, of the song we wound up finding.”.

The resulting ‘Gilded Cage’ penned especially for the film is a knowing ballad to the city of Los Angeles, one that acknowledges its glitter as much as its grit.