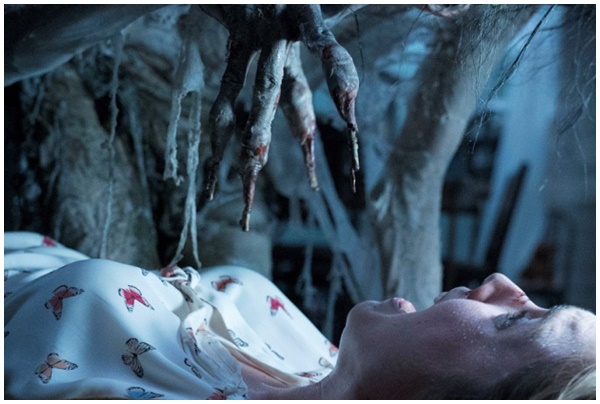 The creative minds behind the hit Insidious trilogy return for Insidious: The Last Key and takes us back to the beginnings of the Insidious franchise.

The film is written by co-creator Leigh Whannell (Saw), who wrote the trilogy and directed Chapter 3; produced by Insidious regulars Jason Blum (The Purge series, Get Out, Split), Oren Peli (Paranormal Activity) and co-creator James Wan (The Conjuring, Furious 7); and directed by series newcomer Adam Robitel (The Taking of Deborah Logan).

In the supernatural thriller, which welcomes back franchise standout Lin Shaye as Dr. Elise Rainier, the brilliant parapsychologist faces her most fearsome and personal haunting yet: in her own family home.

Dr. Elise Rainier—a brilliant psychic, clairvoyant and demonologist—has spent her life guiding innocents back into the light…and thwarting creatures that have opened unholy doors into eternal darkness. As a child who could communicate with the dead, she accidentally unleashed something unspeakable into our world.

We first met Dr. Rainier in 2010’s Insidious, when, alongside sidekicks Tucker and Specs, she helps Josh and Renai Lambert draw their son Dalton from the deep recesses of The Further—a nightmarish mirror vision of our existence. There, dark spirits ooze from unspeakable corners and attempt to re-enter our realm by any means necessary. As Elise uses her gifts to free Dalton, the demon that possessed Josh when he was just a boy escapes from The Further and kills Elise. But is she really dead?

In Insidious: Chapter 2 the Lamberts are still reeling from the psychic abduction of their son and the loss of Elise. When they move back into Josh’s boyhood home, Josh again becomes possessed by the demon residing in the house and lying in wait. To save his father, Dalton reaches into The Further and finds Elise, who is still alive fighting an eternal battle to free trapped souls, rescue Josh and end the family curse.

Elise returns to the land of the living in Insidious: Chapter 3, which takes us back to a time before the Lamberts. Called out of retirement to help Quinn Brenner, a teen whose attempts to connect with her dead mother go horribly wrong, Elise is reminded of her sworn duty to use her paranormal gifts for the good of mankind.

Insidious: The Last Key takes us with Elise back to her girlhood home. But when the ghastliest haunted house Elise has ever entered proves to be the one where she was raised, Elise must face her greatest fears and destroy the immortal Key Face—the demon she set free so many years before. Vanquish him on his terrain, and she will free trapped souls for good. Fail, and the house she barely escaped as a child will claim her soul for eternity.

The popularity of the franchise always made the possibility of a fourth Insidious film intriguing to Blum, but the decision was also up to creators James Wan and Leigh Whannell. “How it usually works,” Blum offers, “is that I call Leigh, and say, ‘We’d love to do another one.’ But I don’t force people, and I wouldn’t want to deal with anyone else unless they blessed it. Leigh had an idea about creating a film around Elise’s character for a long time, and we were all very committed to that.”

“We’ve made a lot of scary movies,” Blum continues, “and the hardest thing on a scary movie is for the actor who is communicating to the audience to be believable. No matter how you dress it up, in some way, they’re saying, ‘Ghosts are real. They exist. They’re scary.’ No matter how good the writing is—God bless Leigh Whannell—it’s hard to deliver those lines and believe them. And Lin is incredibly good at saying things that make no sense, and making them feel like they make complete sense.”

“We put a lot of work into the characters, making them worthy of the audience’s affection,” states Whannell. “Elise and Specs and Tucker are a family at this stage and you get to see their interplay and you get to really relate to them.”

Leigh Whannell grew up in Melbourne, Australia, where, at the age of four, he developed an obsession with telling stories. In 1995, at the age of 18, he was accepted into the Royal Melbourne Institute of Technology’s prestigious Media Arts course, where he met fellow filmmaker James Wan.

After graduating from college, Whannell worked more closely with James Wan to fulfill his dream of making a film. Small acting roles cropped up from time to time, including one in The Matrix Reloaded (2003), which Whannell said was “the most fun I’ve ever had in my life”. In 2004, after nine months of writing, Saw was born. Whannell had written the screenplay for what he thought would be a self-financed, Blair Witch style feature, where he would star and Wan would direct. The script gained so much attention that soon enough, they were shopping it around Hollywood.

“Leigh and Lin have taken us on a journey with this brilliantly complex parapsychologist who has been running from demons of her own since she was a child,” reveals director Adam Robitel. “Instead of hiding from the world, she has taken this evil by the throat and said, ‘You will not hurt one more person.’ Where so many would think of themselves first, Elise has stood up for innocence and goodness. The fact that we get to follow her back to the place where it all started—and where she was launched into the world of the supernatural—was what drew me to the project in the first place.”

Blum and Robitel met during the filming of the Paranormal Activity series. “We’d worked on a couple of Paranormal Activity movies together, and I liked Adam, and thought he was very talented,” Blum recalls. When I saw The Taking of Deborah Logan, which I thought was creepy, good and interesting, we started talking about Insidious. And he said what a huge fan he was of the three movies.”

Whannell, who created Insidious alongside Wan, plays Specs in the series, as well as directed Insidious: Chapter 3. “Whenever we have an Insidious movie we go to James and Leigh and if they’re not available we go out wide,” says Blum.

“There’s a certain fun to the Insidious films—a wink at the audience. They’re really scary, and it’s hard to pull off both of those things,” the producer adds. “Leigh writes that so well.”

When Insidious: The Last Key opens, Elise Rainier (Lin Shaye) has invited her two partners in paranormal investigation, Specs and Tucker (Angus Sampson) to come live with her. Elise is at a good place in her life; things have settled down for her. Specs and Tucker are still running their business, Spectral Sightings, responding with Elise to calls from people experiencing poltergeists or ghosts or hauntings in their homes.

Going back to the house she grew up in meant going back to The Further, a place where pure evil lies in wait for the innocent. “The Further is a place that spirits are stuck in, it’s like purgatory,” says Whannell. “It’s the realm of the dead. All of the wounded souls, the people who killed or were killed themselves and all of the tortured souls that haven’t quite finished with their business on Earth reside in this realm.”
“It’s the opposite of light,” he continues. “It’s a black hole, a ‘black void,’ as we call it. It can recreate your past, and it doesn’t follow rules of time and space.”

What is known only to Elise is there is another reason she has come home to face her past. It was she who unlocked the original demon and set him free. “When we meet the modern-day Elise in this film, we know we’re meeting a fractured woman,” Whannell continues. “This film deals with a lot more than just a straightforward haunting.”

Enter the master of all demons, who has been pulling the puppet strings of the others for so many millennia. “The villain in Insidious: The Last Key is Key Face,” explains Blum, “who has skeleton keys for fingers and uses those skeleton keys to kill people.”

“There’s a lot of symbolism with this particular demon,” says Whannell. “The town that Elise grew up in in New Mexico is called Five Keys. She also grew up on the grounds of a prison. Her father was the assistant warden. All these things that Elise has locked away, this demon has the power to lock and unlock. By confronting this demon, Elise confronts her own past and her own locked doors—the things she’s shut out of her life.”

“As the narrative architect of the series, Leigh has crafted such a phenomenal world for Insidious,” says Robitel. “He knows exactly where each character has gone and where he or she is headed. This is a massively complex puzzle piece that he makes feel seamless for the audience. Plus, he gets to play in the world he helped to create! As someone who has lived and breathed this world, how incredible is that?”