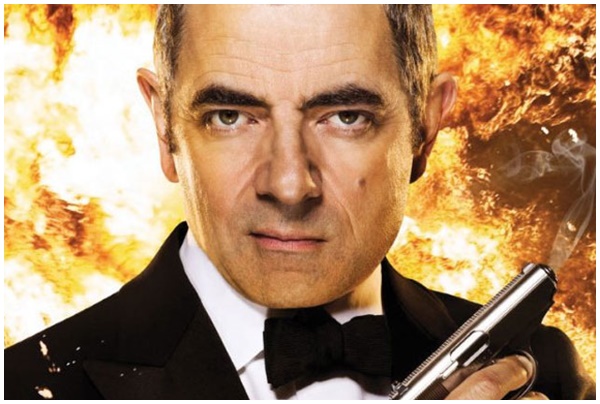 A battle of wit versus the witless, mastermind versus Mr Mindless, high tech versus analogue as Johnny English lurches from one mishap to the next

In 1992 Barclaycard began a hugely memorable series of television adverts. Featuring Rowan Atkinson as a bumbling MI7 agent, Richard Latham, he stumbles from disaster to disaster because – unlike his sidekick Bough – he doesn’t have a Barclaycard to help him out. The campaign produced seventeen different adverts and ran for five years, earning Rowan Atkinson a BAFTA Advertising Award for best actor in 1992 and securing Barclaycard as the market leader. Ten years later the character would have his first screen outing as Johnny English.

In Johnny English Strikes Again the UK is in peril.  Five days before the PM is to host her first G12 summit, MI7’s security is breached and every agent in the field identified and exposed.   The only hope of finding the perpetrator is to bring an agent out of retirement, but with most of them either dead or close to it, the head of MI7 is left with only one choice, and his name is English… Johnny English.

Casting aside his job as a teacher, Johnny English (Rowan Atkinson) accepts his mission, but things have changed since he was last in the field; guns and gadgets have been replaced by digital phones, sports cars by electric hatchbacks.  English is aghast, but quickly finds a way around this new protocol, reasoning that it takes an analogue approach to catch a digital mastermind.

“The whole attitude of the character was that he hated the product he was selling, which was a very counter-intuitive idea and I have to say quite a unique ‘Rowan’ approach to things,” says producer Chris Clark. “He will think counter-intuitively towards things and as it happens the Barclaycard ads have turned out to be one of the UK’s most famous ad campaigns, which is remarkable given the lead character hates the product. It’s a fantastic piece of satire.”

Successful producing duo Tim Bevan and Eric Fellner, of British company Working Title Films, recognised the cinematic potential of the character and went to Atkinson with a proposal to develop Richard Latham for the screen.

Clark was working in-house at Working Title at the time and helped develop the project. “When I first met Tim and Eric there was already discussion about turning the Barclaycard ad into a movie,” he says.

The film gained traction when Clark met with Atkinson, who was keen, and a first draft was developed in 1999 by Rob Wade and Neal Purvis, who that very year saw The World Is Not Enough, their first James Bond script, released in cinemas. By 2002, when the film went into production, Will Davies had established himself as the main writer. Davies later received a ‘story’ credit for the 2011 sequel, Johnny English Reborn, scripted by Hamish McColl, a close collaborator with Atkinson after co-writing 2007’s Mr. Bean’s Holiday.

Traditionally, Atkinson has usually taken several years between producing sequels for his most famous characters, the hapless Mr. Bean and Johnny English, to ensure they remained fresh and didn’t stagnate. When it came to a third Johnny English film, Atkinson gradually began to warm to the idea. “If you think you can have another go at something, you tend to think ‘Why not have another go?’” he says, “as long as you feel mentally and physically capable of doing the job.”

Having made seven films with Atkinson over more than two decades, Tim Bevan estimates that it’s the actor’s restraint with his characters that is one of his most admirable qualities. “He’s never over-exploited his own brands. He’s always made the audience wait a little bit. In this very quick cycle world we live in now, people say ‘Oh, is five years too long?’ or eight years or three years, or whatever. The answer with Rowan is ‘No it’s not.’ Actually the audience are about ready for it again.”

After some early script development, Davies received a call from Clark, telling him that Atkinson was ready to return to the character. “Rowan had got to the stage where he was really serious about making it,” explains Davies. “And he wasn’t quite sure what was in the existing script he was going to do.” To move the script on, Davies was joined by Atkinson, Clark and Bevan for some intensive brainstorming. “We get in a room and start to thrash ideas around,” explains Bevan. “And it literally starts with a blank sheet of paper.”

As co-chairman of Working Title, with a host of projects in development, production and post, Bevan is not expected to be in the writers’ room, but a Johnny English film is different.

“Tim was there for at least ninety percent of those sessions,” says Davies. “I think he really loved being at them and we loved him being there.  He finds it funny and if there are things that he laughs at…well then it’s probably going to work.  And he would notice things that maybe we hadn’t realised how funny they were.”

After these initial sessions, Davies went away, gave thought to what might work and came back to pitch potential story ideas to the gang. “Tim, Chris, Rowan and I then picked out the ones that felt most appealing.” Johnny English 3 – or Johnny English Strikes Again, as it would soon become known – was underway.

The experienced Clark, who returned to the series for a third outing after producing the first two films, knew what the scripting process would entail.

“As we’ve discovered, it takes many years to develop to a position that we’re happy [with],” he says. “There’s a lot of dedication that’s needed.” Ironically, it’s this embryonic process that excites Atkinson the most. “Shooting a movie, I’ve always found incredibly difficult and stressful and worrying,” he admits. “But when you’re just sitting in a room with some likeminded souls thinking, ‘Wouldn’t it be funny if this happened?’…then it’s fun. That’s what drives you.”

The script development process sees ideas, set pieces and storylines presented, with Atkinson studying each for potential. “Rowan is completely across everything from the word go,” says Clark. “He doesn’t write it per se, but he brings whole comic sequences to the table or he then collaborates with the writer and whomever else is in the room.” Davies notes it’s a case of being “guided by Rowan’s instincts about what’s going to be right for the character”, fleshing out amorphous ideas until they “gradually become more shaped along the way”.

As the process unfolded, the team hit on a theme: analogue versus digital. From this, the plot and villain for Johnny English Strikes Again began to take shape. It opens with a cyber attack on MI7, with all the agents’ identities compromised and the country held to ransom. With nobody left to defend Britain’s national security, the Prime Minister is left to turn to former agents to help save the day. Now teaching geography at a prep school in deepest, darkest Lincolnshire, after being forced into early retirement, Johnny English is one of the agents called upon to find the cyber criminal.

A man who perhaps was more in his prime in the pre-digital days, Johnny English remains the perfect symbol for the analogue world. “The more the world becomes digitized, the more extraordinary analogue is,” says Davies. “There’s something so physical and appealing about it. And of course analogue has an advantage over the digital high tech of 21st Century. Analogue is invisible to the digital world.”

Representing the hi-tech digital world is American billionaire Jason Volta, the head of a tech company who meets with the Prime Minister to convince her to hand Britain’s digital security matters over to his company. While the PM also pressures EU leaders to do the same, little does she realize that Volta is the one behind the security breach and the accompanying ransom demand. While Johnny English stumbles upon his scheme, when nobody believes him, he must set out to find proof.

With Johnny brought back to MI7, the plot and characters began to be fleshed out for a story that takes Johnny English from London to the French Riviera and finally Scotland. As Atkinson explains, the script development comes down to two factors: “Is this an appropriate joke for Johnny English and is it a good enough joke?” His task is to ensure the tone of the ideas remain consistent with the Johnny English character – “this spy who’s not as good as he thinks he is”.

Davies praises Atkinson for his innate comic sensibilities and the way he understands the Johnny English character. “The thing about Rowan is he knows exactly what’s true to the character and the way the character is going to be in a certain situation. Certain things are too big or too wacky.  It has to feel real and it has to feel true, otherwise it doesn’t work. The world around Johnny has to feel as real as possible to be funny. Rowan is very careful about how that stuff is calibrated.”

The script for Johnny English Strikes Again was nurtured for a year before a director was brought onboard. In came David Kerr, a filmmaker with an impressive track record working with comedians, after helming two series of the BAFTA award winning That Mitchell and Webb Look, as well as Fresh Meat, Inside No.9 and Whites. Having also directed a television movie version of William Shakespeare’s A Midsummer Night’s Dream with Matt Lucas as Bottom, the offer to work on a high-profile comedy like Johnny English was simply too tempting to resist.

“I was a huge fan of the first two Johnny movies,” says Kerr. “I found them really funny, and my kids enjoy them. And I’d been a long time fan of Rowan Atkinson. I mean who couldn’t be? I had grown up with Not The Nine O’Clock News, Blackadder, Mr. Bean and all of the movies that he had made as well, so I was already predisposed to liking the project. And then when I read an early draft of the script, I loved it; it was a real page-turner, full of action, full of adventure, and I thought I could do a lot with it.”

For Clark, Kerr was the ideal choice to help hone Atkinson’s remarkable comic talents. “David is a director with great comic instincts, but also someone who can collaborate with somebody who is at the heart of everything,” he explains. “There’s no film without Rowan. It’s all about his comedy and also his comic process and that needs someone who is tuned into that.  Rowan is quite unique in that respect.  He’s not a ‘normal’ actor.  He’s more than that.  He’s a comic performer and you need someone who understands that process.”

Kerr was recommended to Atkinson, who met with the director and felt he was just the sort to handle the project. “He’s very used to dealing with writer-performers, with actors who are also creators or writers because he knows in the end it’s very much a partnership,” says Atkinson. “It tends not to be the director telling the actor what to do because the actor’s already got an idea of how he sees it on screen and it’s a matter of the director plugging into that and trying to shoot it in a way that is empathetic with what the lead actor is trying to achieve.”

With Kerr on board, the team continued to tweak the script, the heart of which is Atkinson finessing scenarios, ideas and jokes to feel true to the character.  It’s a process that gets more and more detail-oriented the closer the team gets to production. Davies recalls the day before pre-production began, he and Atkinson went through the script, analyzing every line of dialogue to ensure that each comic beat hit perfectly. “We were making important changes right up until the last minute, so that it was funnier, quicker but still true.”