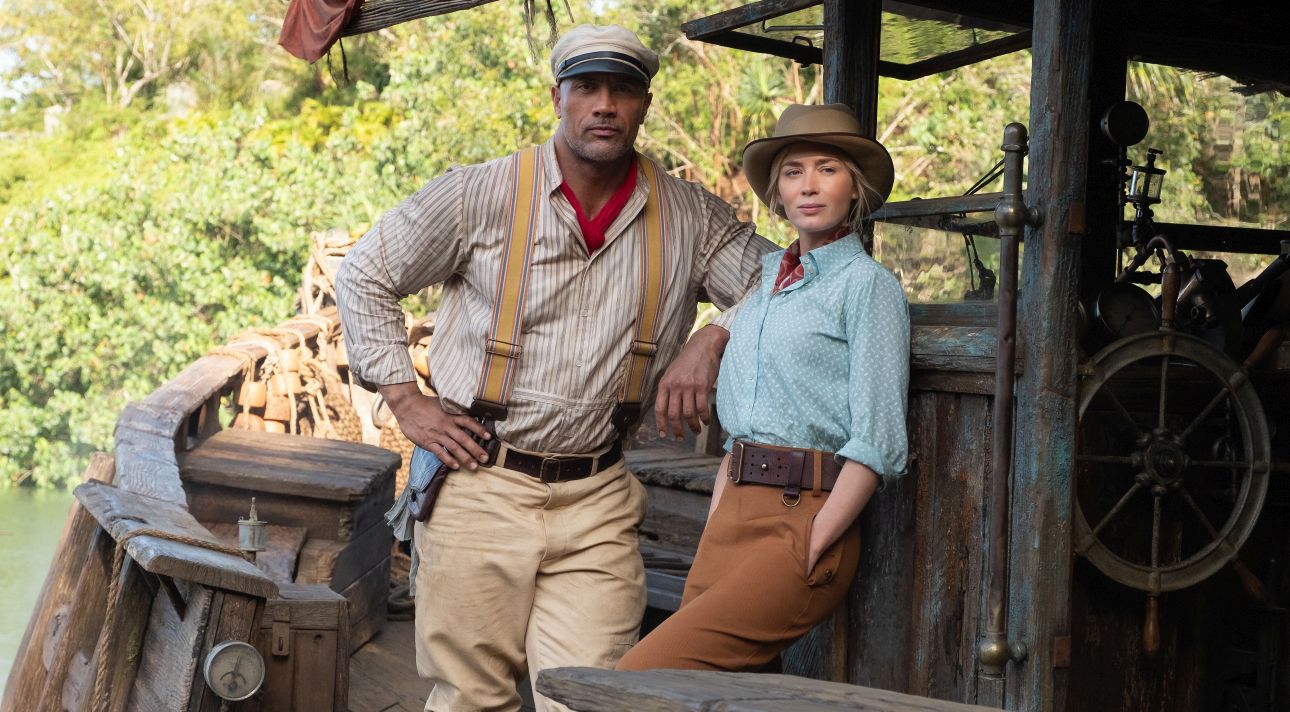 With the 1951 classic film The African Queen as the guiding inspiration for Walt Disney’s Imagineers when conceiving the theme park attraction, its cinematic roots were solid for Jungle Cruise, a contemporary retelling with Dwayne Johnson and Emily Blunt filling the shoes of Humphrey Bogart and Katharine Hepburn.

In Jungle Cruise, Johnson takes on the role of a gruff , wisecracking skipper Frank Wolff at the helm of the La Quila—his ramshackle-but-charming boat with Blunt as a headstrong researcher who enlists Frank’s questionable services to guide her down the deepest and most dangerous parts of the Amazon River, hoping to uncover the mystery of an ancient tribal artifact—a legendary relic with the power to change the fate of humanity.

“‘Jungle Cruise’ is about adventure and about life, and living a full life,” says Johnson, who is also a producer on the film. “And being aware of that and breaking through barriers by doing things beyond what people think are your limits. ‘Jungle Cruise’ is an adventure: it’s fun, it’s magical, it’s mystical, it’s dangerous, it’s exciting.”

“Jungle Cruise was inspired by the hilariously pun-fueled riverboat adventure ride that has resonated with kids of every age for close to 65 years. “People love the Jungle Cruise attraction because of its rich history and its tradition,” says Johnson. “There’s a unique quality to Jungle Cruise that still feels as if it were fifty or sixty years ago. But that’s the charm of it. When you go around the world to some of these other parks, you see their iterations of Jungle Cruise that are just spectacular. I feel there’s a wish fulfillment factor for the audience that happens with the Jungle Cruise ride. That wish fulfillment, I believe, is the idea that you are being transported, and you are going on truly the adventure and ride of a lifetime.

Producers John Davis and John Fox of Davis Entertainment, Dwayne Johnson, along with his Seven Bucks Productions team of Hiram Garcia and Dany Garcia, and together with his longtime producing partner Beau Flynn (FlynnPictureCo.), joined Disney to bring the thrill-packed “Jungle Cruise” adventure to the big screen.

At the helm is director Jaume Collet-Serra, who was born in Sant Iscle de Vallalta, a small town in the province of Barcelona, Catalonia, Spain. At the age of 18, he moved to Los Angeles with limited resources and a basic knowledge of the English language, determined to become a film director. He attended Columbia College and began working on the side as an editor. Influenced by directors such as David Fincher, Spike Jonze and Mark Romanek, some of his films include Orphan, Unknown and Run All Night.

Nods to the Jungle Cruise ride abound, as Collet-Serra explains: “The big star of the actual Jungle Cruise ride is the backside of water. So we knew that we couldn’t make a movie or a jungle cruise without that being featured. Throughout the movie, we have little nuggets and Easter eggs that are from the ride. There are a lot of piranhas, which are highly featured in the ride, and fake snakes. Then there are the little things like having the gun and a holster near the wheel of the boat. That’s something that is in every boat in the Jungle Cruise ride. We’ve kept things like that.”

With Collet-Serra on board, a collective writing effort resulted in a screen story by John Norville & Josh Goldstein and Glenn Ficarra & John Requa and a screenplay by Michael Green and Glenn Ficarra & John Requa. The script is a genre-twisting mash-up of classic adventure, suspense, action, laughs and heart set in early 20th-century Europe and Brazil with mythical undertones reminiscent in tone to throwback classic films like “The African Queen,” “Romancing the Stone” or the “Indiana Jones” saga.

For producer Dany Garcia, the characters that the writers developed elevated the project. “‘Jungle Cruise,’ like any strong story, is beautifully and unequivocally rooted in its characters—illuminating their motivations, hopes, fears and deepest dreams,” she comments. “Authentic characters like these draw the audience in, and urge them to stick around, to root for their successes and to lament over their failures. The depth of the characters directly translates to the depth of emotion on that a good story can evoke. Over the years we have learned that it is the characters that our global audience comes back to. These characters stay with you, long after the plot details may fade away.”

As much as the writers and filmmakers looked to create a new Jungle Cruise world for film audiences, they would be remiss in not paying homage to the ride’s tradition of corny jokes and groan-inducing puns. “From the beginning it was really important to us to incorporate as much of the Jungle Cruise and Disneyland mythology into this story,” explains producer Beau Flynn. “First and foremost are the puns. They are a critical part of the attraction and, thanks to Disney’s Imagineers, there were thousands of puns, jokes and factoids that we cherry-picked our way through. We’ve curated a wonderful mix of puns and jokes throughout the movie. I think that the fans of the ride will particularly appreciate it, but everyone loves a good pun!”

Producers John Davis and John Fox were instrumental in recognizing the viability of adapting the Jungle Cruise attraction into a potential film.

There was palpable excitement to translating the famed ride into an eye-popping action adventure as special and unique as the ride itself. Moving forward, the filmmakers’ philosophy was simple: satisfy the dedicated Disneyland fanbase by respecting and honoring the integrity and intent of the Jungle Cruise mythology, while exciting a savvy global film audience with an enriching and entertaining cinematic thrill ride.

With strong interest in the premise from Walt Disney Studios’ president of motion picture production Sean Bailey and his team, the project soon gained a new level of momentum when Dwayne Johnson expressed interest in boarding the project. Johnson has a long-standing history with Disney dating back to 2007, starring in the films The Game Plan, Race to Witch Mountain and most recently Moana.

“From the beginning we wanted to ensure that every element of the Jungle Cruise attraction —the spirit and great reverence that we have for it and Walt—are in the movie,” remarks Johnson. “We’ve worked closely with the tremendously talented team of Disney Imagineers to make sure that we are servicing all these memorable moments and integrating them into this epic adventure. This is what makes this project so very special. It’s been years in the making to pay homage to this wonderful piece of Disneyland history and we’re very, very excited about making a great movie that honors and respects the Jungle Cruise ride.

From those first early pitches and treatments by Davis’ team, Disney executives championed the project, which the veteran producer notes set the stage for a rewarding partnership that fueled the “Jungle Cruise” project over the years. Says Davis of their combined efforts, “Disney has been such a great partner in telling this story, particularly Sean Bailey, who over the years felt like part of the filmmaking team, which is rare in a studio executive. He’s understood what we were trying to achieve. He’s smart with the creative and his instincts are consistently on the money.”

“What’s so special about being part of a Disney film is that you are becoming part of history and part of a legacy,” says producer Hiram Garcia. “No one does it better than Disney. They make movies, stories and tales that stay with people for a lifetime. People carry them as a kid, and keep them with them all the way through adulthood, and then pass it on to their kids. When you’re a part of something like that, you feel the energy of Disney, a brand that takes so seriously what they’re making, and how it affects the world. Once you’ve been a part of that Disney family, you’re playing the game for real.

For Dwayne Johnson, Collet-Serra’s vision and “unique sense of what this movie should be” was paramount. “He comes from a very unique and special cadre of Spanish directors who not only have an incredible work ethic and a great visual aesthetic but can tell stories through their camera work,” explains Johnson. “When you think of all the elements that a Jungle Cruise movie brings to the table, it’s essential to have this kind of artist leading the charge.”

For Collet-Serra, his work with the filmmakers commenced with a definitive tone in mind. “The Jungle Cruise ride is beloved by many people, not only because it’s been there for a longtime but because it’s one of the only rides that the whole family can enjoy together,” says Collet-Serra. “You can bring a baby and you can bring your grandma so, in a way, we wanted to make a film that reflected that. A film that the whole family could enjoy together. So, that was the starting point for us.”

“The comedy of the ride has evolved through the years. So, we took that as a tonal guideline, and then from then on we built on a mythology and created characters and situations that would put the audience in the ride and expand on the experience of what they go through at Disneyland. But now they can experience that in the theater.”

“This movie takes place in the early 1900s in the Amazon jungle, so we wanted to make a movie that was vibrant, full of color and rich,” remarks Collet-Serra. “It’s hard to make a movie in the actual Amazon, so we had to bring those colors and those textures to our stage, and the only tools that we had were the production design and the costumes.

Amid all the massive action, humor and eye-popping visual effects is the resounding, everlasting triumphant theme of love, which the filmmakers knew was the linchpin to the “Jungle Cruise” story. Says Flynn, “We always envisioned ‘Jungle Cruise’ as a huge action-adventure movie with a real sense of humor, but thematically underneath it all is a love story. To adapt the classic Disney theme-park ride Jungle Cruise into a global feature film provides us a great opportunity to play into massive set pieces, classic swashbuckling adventure and transport the audience to a magical world that really doesn’t exist anymore.”

For director Jaume Collet-Serra, it’s simple: “I just want them to have a good time. I think we all need to have an escape and a good time. This movie is for the whole family, and enjoying it together as a family is the goal. So, if they’re all able to do that, I’m happy.”