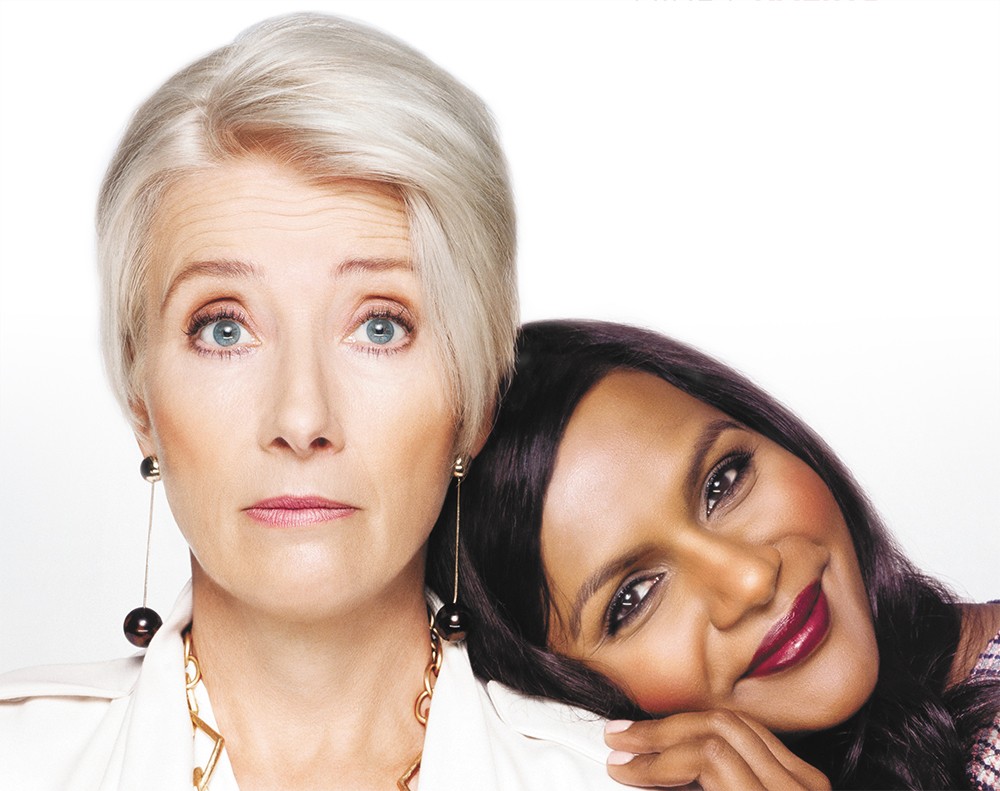 Much like the character Katherine Newbury in Late Show , actor, writer and producer Mindy Kaling is an entertainment industry pioneer, breaking down barriers by becoming the first woman and first person of color to write for the hit sitcom “The Office,” then creating and starring in her own show, “The Mindy Project,” and penning two best-selling books.

Now, the creative dynamo, who has emerged as one of the most original comic voices of her generation, has channeled her own career experiences into her first feature screenplay, which takes a behind-the-scenes look at the world of television comedy.

After almost 30 years, a groundbreaking talk-show host suspects she may soon be losing her coveted seat on late-night television unless she manages a game-changing transformation.

Legendary talk-show host Katherine Newbury (Oscar winner Emma Thompson) is a pioneer in her field. The only woman ever to have a long-running program on late night, she keeps her writers’ room on a short leash ― and all male. But when her ratings plummet and she is accused of being a “woman who hates women,”

Katherine puts gender equality on her to-do list and impulsively hires Molly Patel (Mindy Kaling), a chemical plant efficiency expert from suburban Pennsylvania, as the first and only female on her writing staff. With rumors swirling that Katherine is being replaced by a younger, hipper male host, she demands that the writers make her funny and relevant again.

A lifelong fan, Molly is determined to prove she’s not just a diversity hire, but the one person who can turn her idol’s career around. Going against everything Katherine has staked her reputation on, she urges her to make the show more contemporary, authentic and personal, a move that could make Molly’s career ― or send her back to the chemical plant for good.

As a college intern, Kaling got an up-close-and-personal view of late-night comedy on “Late Night With Conan O’Brien.” She decided this male-dominated world would be a natural backdrop for a film, with one important “what if.”

Her protagonist, Katherine Newbury, is a woman who has long been at the top of the entertainment world heap, but whose star is fading fast. “So much of television, in particular late night, is about exceptionalism,” says Kaling. “Sadly, there hasn’t been a female late-night talk show host on any big network since Joan Rivers’ show in the 1980s, which lasted less than a year. During award seasons I can’t help but notice how few women there are even on any of their staffs. In our story, Katherine was able to rise up through the ranks and become the exception to the rule.”

Kaling is herself the exception to many television rules that she believes are ripe for change. “Women are socialized to believe there can only be one in a work environment, particularly Hollywood,” she says. “It breeds a lot of competition. When it’s the norm for only one woman to be hired, you feel like you’re ﬁghting for that one spot and so you can’t support other women.”

She imagined a female stand-up whose blazing intellect, unstoppable energy and provocative humor would provide young women interested in comedy with a role model. As it happens, her own personal hero, Academy Award-winning actress and writer Emma Thompson, began performing as a sketch comedian and quickly segued into what she has called “militant feminist” stand-up comedy.

Before becoming a world-renowned dramatic actress, she hosted a comedy-variety television show in the U.K. Knowing Thompson would be perfect for the role, Kaling tailored it specifically for her. “When I pictured this character, I always saw Emma playing her,” she says. “She has been such an enormous influence on me. I think of it almost as a love story between two women of different generations who have the same passions: comedy and television, two venues that have not been very kind to women, and both characters are a bit like me. Molly is like me at the beginning of
my career ― eager, hopeful and trying not to show how intimidated she is. As I have gotten more successful, I identify as Katherine, someone who has worked super hard to get where she is.”

Kaling took her idea to producer Howard Klein, the Emmy-winning co-founder of talent management and production company 3 Arts Entertainment, who served as an executive producer on “The Ofﬁce” and “The Mindy Project” as well as numerous other hit series.

“She pitched me the idea, and I thought, this is fantastic, it’s a comedy that has poignant moments, dramatic moments and great character stories,” he recalls. “As it entertains you, it reveals a lot about the late-night world, which is a huge part of American popular culture. But people don’t know a lot about the backroom stuff. What makes it truly special is that the movie includes a lot of things that Mindy has lived through.”

30WEST and its sister company Imperative Entertainment also signed on to Late Night almost immediately. Imperative’s Jillian Apfelbaum said “I was convinced that we needed to be a part of it,” she remembers. “The writing is some of the best I’ve ever read, and the characters of Molly and Katherine are particularly well-drawn. Mindy is incredibly talented. Her sense of humor has been on full display in her previous work, but this script delves into observations about comedy and womanhood and competition. It’s very sophisticated and really nuanced. It’s the kind of movie I will watch with my mom, with my family and with my friends and really enjoy. There’s so much darkness in the world right now, so it’s great to see something so uplifting.”

‘I Am Molly’ Kaling and Klein knew it would be essential to find a talented director who had a personal connection to the story. They immediately thought of Nisha Ganatra, a feature and television director whose numerous credits include “Better Things,” “Transparent” (for which she received an Emmy nomination) and “Brooklyn Nine-Nine,” as well as “The Mindy Project.”

An Indian-American born in Vancouver but raised in California, and one of the rare female television directors, Ganatra brought unique insights into Molly’s situation. “We felt she had the understanding and experience to tell this story like no one else could,” Klein says.

“Her approach to the script was really smart, so with her attached we were off to the races.” Ganatra says her first reaction to the script was: “I am Molly.” The struggles the character faces mirror a lot of the challenges Ganatra has met in the television and film world. “Mindy had written this hilarious, amazing script that is very much her own personal story about starting out as an American woman of Indian descent on a television writing staff,” says the director.

“It really is an ode to hard work and she brought a lot of her life to it. Becoming a director wasn’t a path I thought would ever be open to me as an Indian-American woman.”

“Seeing Molly subvert the system through sheer chutzpah was inspiring and fun,” says Ganatra. “To even have a shot at a job like that is fantasy fulﬁllment for me and a lot of people, as is the idea of Katherine as a late-night television host.”

She and Kaling both recognize the irony that a film exploring the positive aspects of diversity in the workplace required hiring a mostly male, white cast. “I always want to work with a diverse cast, but that is not the reality in the world we are portraying,” the director points out. “The whole point is the lack of diversity, so necessarily the cast is not going to be that diverse. That was a tough thing to get my mind around. But unfortunately, it’s accurate. I often find I’m the only woman of color on a set.”

Katherine Newbury’s wit and tongue are both razor-sharp, and years in a competitive field have given her the reflexes of a battle-hardened general.

As played by Emma Thompson, she is used to being the smartest person in the room and sees no reason to hide it. “Emma takes her from the brink of making you hate her to making your heart break for her, and then she makes you laugh,” says Ganatra. “Whether it’s her completely unexpected, brilliant improvs or just the look on her face, she inherently knows what’s funny. Emma brings everything you could ever wish for as a director, and when you meet her you think, ‘How can I be like her when I grow up?’”

She may be best known for her dramatic acting, but she honed her comedy skills at Cambridge University’s acclaimed theater club, Footlights, which boasts an alumni network that includes several members of Monty Python, Hugh Laurie and Stephen Fry, John Oliver, Peter Cook and, yes, even the Prince of Wales. She helped put together the group’s first all-female sketch comedy revue before launching herself as a stand-up. Like Kaling, Thompson is a writer as well as an actor and is famously the only person ever to receive Oscars for both, winning Best Adapted Screenplay for Sense and Sensibility and Best Actress for Howards End.

Kaling has written her a dream role, Thompson says. “I was astonished and honored that she had written it with me in mind. The quality of the script is extraordinary. When people say they’ve written something for you, it can be touch and go, but her comic take, her timing, the cadences in her writing are just beautiful for all the characters.”

Thompson believes the film accurately conveys women’s standing in the world of comedy. Pointing to the examples of brilliant comediennes like Victoria Wood, French and Saunders, Lily Tomlin, Carol Burnett, Rita Rudner, Tina Fey and more, Thompson says she has trouble understanding why she still hears people says women aren’t funny. “Stand-up is very much a male bastion,” she observes. “The actual form of it is extremely masculine ― come on, tell those jokes, talk about your dick a lot. Female comedy’s very different. It’s often circular, with little laughs in between. But Katherine grew in this very male world and swallowed it whole. Then this young woman says: Your show has become completely irrelevant, you’re getting old and you’re white. So what are you going to do about that? Molly modernizes Katherine, but in a very ironic way, which makes it very attractive.”

The themes Late Night explores are timely and important, Apfelbaum continues, but it is also an aspirational comedy. “As viewers we want Molly to succeed, we want Katherine to succeed, even though they’re both very ﬂawed,” she says. “Katherine learns so much from Molly about being open and trusting her instincts. Molly learns about skill and hard work and earning your spot at the table from Katherine. They really do need each other in this very interesting way.”

Ganatra says Late Night is the kind of story she became a filmmaker to tell.

“I want to bring more attention to women and immigrants on the screen. I don’t get tired of seeing those stories myself. I also love comedies, so this was a dream project. Filmmakers sometimes forget that movies should be entertaining. I hope the audience will be laughing, crying and feeling inspired to do something they didn’t think they could do.”

Late Night also has a serious message about the importance of women supporting each other, she adds. “We can be our own worst enemies and hold each other back more than any man,” says the director. “Or we can be our biggest champions. The problem with being a groundbreaker is that the ground is really hard! The whole point is making it easier for the next person and the next generation.”