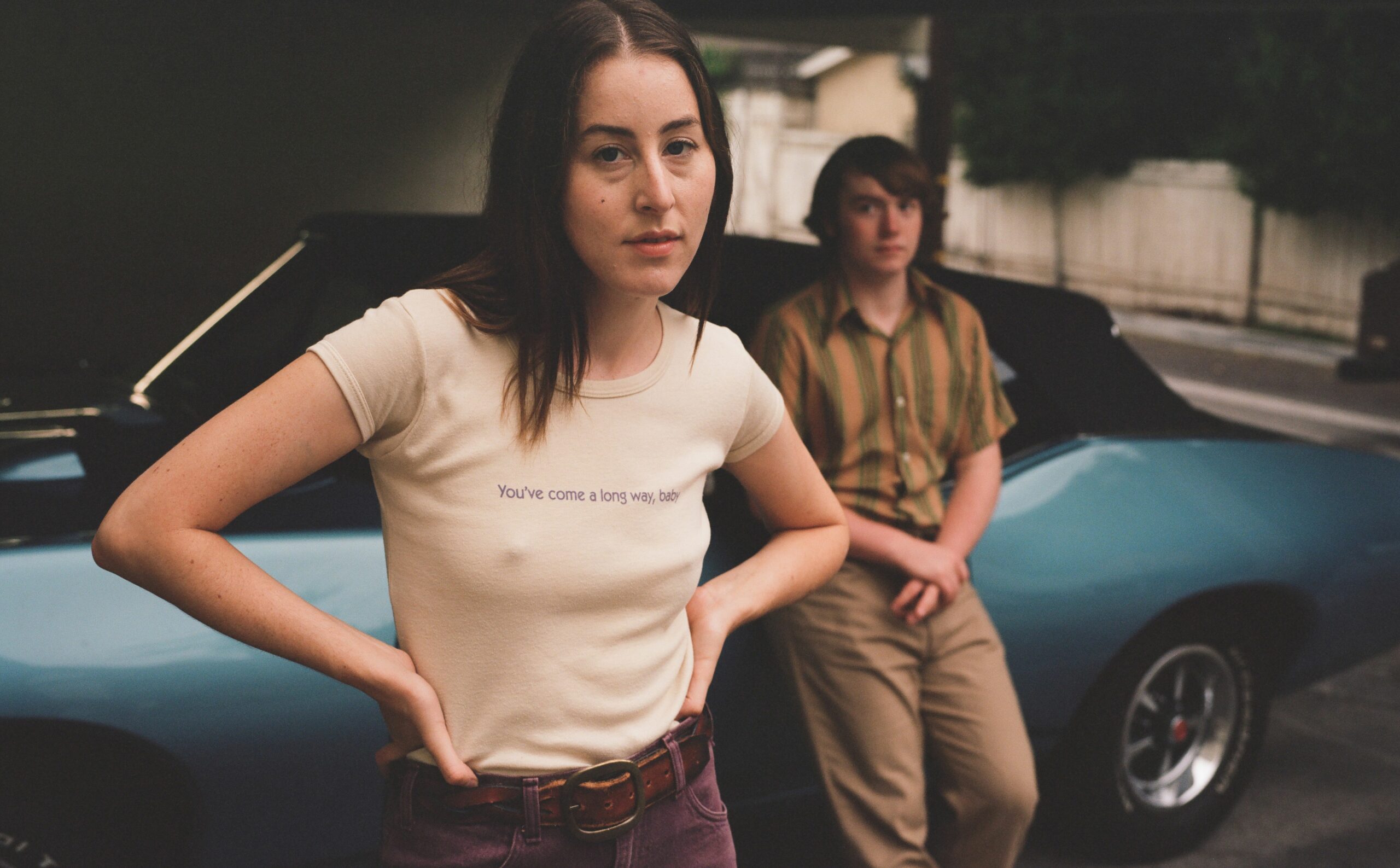 Writer-director Paul Thomas Anderson wrote the screenplay for Licorice Pizza based on the experiences of a childhood friend who would tell him stories of his childhood and then wove a love story into the script.

Gary Goetzman who was a child actor who made a movie with Lucille Ball and would tell Paul Thomas Anderson stories of his childhood “And each of the episodes that you see in this film is a pretty accurate representation of stories that happened to him,” says Anderson. “So I had this text to work from. What I was doing that was original was I was weaving this boy-meets-girl story in amongst it.”

In Licorice Pizza, Goetzman’s surname has been changed to Valentine.

Raised in the San Fernando Valley, Alana Kane (played by Alana Haim) and Gary Valentine (Cooper Hoffman) have never met before picture-taking day at Gary’s high school. Alana is no longer a student but is a young woman seeking to find and define herself beyond her uninspiring job as a photographer’s aide. Gary has already established himself as a working actor — and is quick to tell Alana this in an attempt to impress her. She is amused and intrigued by his preternatural confidence and they strike up a heartfelt if awkward, rapport. Seeking to strengthen this connection with Alana, Gary wangles an opportunity for her to be his chaperone during a New York television appearance; on impulse, she agrees. The TV appearance does not go exactly as planned and once back in California, each of them questions their future. Over time and as their friendship grows Gary pursues career opportunities outside of acting, and becomes a budding entrepreneur selling waterbeds and opening a pinball arcade; and Alana gives serious consideration to her future (including a foray into acting). On their own or side by side, both Gary and Alana experience a series of epiphanies that are both uproarious and bittersweet: close encounters with a famous actor (portrayed by Sean Penn), a Hollywood producer (Bradley Cooper), and a local politician (Benny Safdie). Both self-aware and at loose ends, Alana and Gary blaze through a time and place that carry for them the thrill of first love, entering adulthood, and the discovery of newfound potential — perhaps, most of all, in each other.

The 1970s-set movie stars Cooper Hoffman, son of Anderson’s onetime muse, Philip Seymour Hoffman, as a smooth-talking high schooler named Gary, who flirts shamelessly with Alana (Alana Haim), a 20-something girl helping to take class pictures. She rebuffs his advances, but there’s still something about this guileless hustler that intrigues her, and they become friends, business partners and eventually something more.

“Well when you got a face like that (Alana) and you got a face like my boy, Cooper’s, if you’re doing your job as a director, you come in really close but, you know, that sort of thing, maybe you have thoughts of how to film things but ultimately, you know, it emerges as you see it in front of your face and I suppose so much of this film is just between the two of them and you focus on that, keep focusing on that, don’t lose sight of that, that that was going to be where the core of the story was. Cooper’s magnificent, I’ve known him since he was born,” says Anderson. “So there’s a benefit of knowing somebody and what their strengths are, the energy that he can bring to it. He’s in many ways very similar to Gary in his contagiousness and his intelligence and then he turns around and he farts and you realize he’s 16. It’s shocking how somebody can be so emotionally intelligent and then out to lunch. So we try to capture that because he’s 17- years old.”

Haim is a well-known performer with her two sisters in the band named Haim. Neither had any film acting experience, but Anderson said they were both screen naturals.

“All of the kids in the movie, they’re not actors, they’re friends of ours, friends of my daughters and sons and I sat them down and I made them watch American Graffiti,” says Anderson. “The reason I made them watch American Graffiti, I said you’re going to see something happen that is an accident at the beginning of the movie and notice that the actor does not stop, he does not turn and say I’m sorry, I crashed this moped, you keep acting. So if anything happens, you keep acting. I showed it to them because my kids make movies and sometimes they’re more obsessed with the bloopers of the movie than the movie itself, they always have a blooper reel which is great.”

Many, many years ago I had the kernel of this idea, this boy and this girl and over the years my friendship with this fella named Gary Goetzman who some people may know and the stories he’s told me about his youth, raising his brother, his experiences with opening a water bed store in Encino, all these things that I knew intimately because of where I’m from, it was at my fingertips, the only research that I had to do was inside myself.

“And to get these characters talking, it was — you never admit that writing is easy but when it’s at its best and you know that you’re lucky when you get in a slip of a stream that takes you away and that seemed to happen and it was impossible to ignore and it was and for as maybe as structure-less, as it seems, it was the tightest script that we’ve ever done and it reflects exactly what we had in the script, there’s very little of it we took out, we really just shot the story that we wrote. It’s hilarious to me that to achieve looseness and simplicity in the film I was required to write the strongest and most surgically cut script.”

The benefit of shooting in my neighbourhood on a movie like this is I have a rough sketch of what it might be like. But then, of course, you arrive, and there are 200 kids standing in line waiting to get their picture taken, and it becomes a real live breathing thing. It’s like a dinosaur tail getting away from you. You just try to wrestle it into your frame or go whichever direction it’s going. It never had appeal to me — the idea of knowing every bit before you start. There always must be some room for discovery.