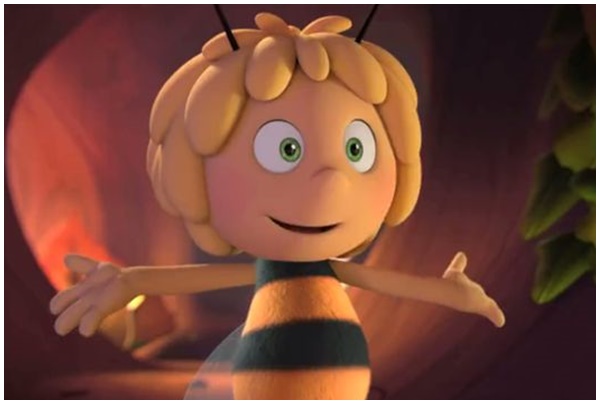 This sequel challenges Maya’s world view as she tries to discover the right balance between being herself and learning the importance of hearing other people’s points of view in order to grow and become a better self.

Maya the Bee – The Honey Games explores another heart-warming story of Maya. In this new adventure, following the success of her first feature Maya the Bee – First Flight  in 2014, and overenthusiastic Maya accidentally embarrasses the Empress of Buzztropolis and is forced to unite with a team of misfit bugs and compete in the Honey Games for a chance to save her hive.

Maya is a classic character; her adventures take place in nature and convey positive stories full of hope, friendship and tolerance.

Maya the Bee – the Honey Games addresses the issue of how important teamwork is, collaborative thinking, friendship and the insight that it is okay not to know the answer to everything. The themes are clearly presented, while the story is told with heart, humour, colour and fun. Additionally, a story revolving around a female lead character has an important position, considering that the majority of animated films highlight male protagonists. Maya can be a strong role model and promote values such as equality and diversity.

Maya the Bee is based on a German children’s novel, which was published in 1912. The book has been translated into many languages and enjoyed by children all over the world. The sharing of this iconic German story is rather unique. But Maya has a strong universal appeal, and as a character she exudes a unique charisma which is not often accessible to the younger audiences of today. Her spirit of friendship and a lack of fear for the unknown makes her an integral part of the cultural fabric in Germany, Australia and abroad. The sharing of culture is a thing that Australians value, being a very multi-cultural society. That is one of the reasons, why Maya the Bee has found a special home in down-under.

Maya’s first feature Maya the Bee – First Flight initially hit the theatres in 2014 and since then has been conquering cinemas in more than 170 countries around the world. The first movie won the Bavarian Movie Award for „Best Animated Movie 2014”. Regarding international admissions it is still among the Top Ten of European children’s and family movies since 2004. According to German Film it is still the most successful German animation film regarding the international box office. It gained a total box office of 32 million US$.

But the first Maya movie was not only a great economic success; it proofed that the continuation and further development of Maya, a character now over 100 years old, has been successful. Thus, the strategy has been accomplished to produce Maya not only for an existing audience, but also for a new one. That is also realized in the fact that Maya the Bee is travelling now to places she had never visited before and has captivated audiences around the world. The success of the first film is unprecedented when considering the history of German/Australian co-productions – and, indeed, by any independent film standard.

The German-Australian partnership for Maya’s first theatrical feature offered a chance for creative leaders in both countries to produce a film of great quality. The sequel Maya the Bee – The Honey Games, in particular offers a rare chance to even improve on the story techniques, technical abilities, design, animation, lighting and even music of the first film – and of course it allows a further development of the characters:

Where the first movie’s thematic journey focused on the importance of Maya being herself, the vision for the sequel was to expand on Maya’s physical and emotional landscape. It was important, right from early concept development that there needed to be opportunities for Maya to travel and grow as a character. The first film saw Maya challenge the world to be accepted for who she was. This sequel challenges Maya’s world view as she tries to discover the right balance between being herself and learning the importance of hearing other people’s points of view in order to grow and become a better self.

Maya’s opportunity to travel and grow as a character comes with the Honey Games: Maya visits a special part of the world she has never been before, a grand and regimented hive city – Buzztropolis.

Maya soon feels lost in the teeming mega-hive, filled with big city sights and experiences and surrounded by bees that see her and Willi as silly little country folk. There Maya has to experience the typical challenges of children of her age: rivalry, rejection, exclusion and even disqualification. Maya needs to overcome her urge to solve problems on her own, but trust her friends and her team to archive great things.

Dealing with these emotional conflicts while finding her way in the elite society of Buzztropolis creates a vulnerability and opportunity for self-reflection and discovery.

The audience finds Maya struggling with trials she has not met before and thus sees a Maya it has not known before. But of course Maya never loses her true self and her core qualities like her compassion for all other insects, her affection and good-hearted nature.

Noel Cleary is a director, story artist and character animator with extensive experience in film and TV series work. He is very passionate about all aspects of his profession and strives to produce emotive, compelling stories and characters. Amongst other projects he was Co-Director for Blinky Bill – The Movie and Episodic Director for TV series Tashi for 26 of the series’ episodes. Before that he worked as character animator and story artist for The Legend of the Guardians for Animal Logic and in story on BBC’s Walking with Dinosaurs and on the short film The Polar Bears. He spent many years working for Walt Disney Studios in Sydney as supervising animator on 12 films and several TV series.

Sergio Delfino has 18 years’ experience working in the animation industry, spending the majority of his time at the renowned claymation studio, Aardman Animations. During this time Sergio worked as a model maker and stop frame animator for commercials and films, including the Oscar winning animated short film, A Close Shave featuring Wallace and Gromit (1994), and Chicken Run (1999).

Sergio was the Creator/Director for the hit series Chop Socky Chooks, which was produced by Aardman for Cartoon Network. The series was nominated for a BAFTA.

In 2010 Sergio left Aardman and the UK for Australia. Since then he has been living and working in Sydney as a senior animator and animation lead on feature films Legend of the Guardians, Happy Feet 2, and The LEGO Batman Movie.

Sergio has now moved to Studio B to share the Director role on Maya the Bee – The Honey Games.

Alexs Stadermann is an accomplished feature film and television Director. He spent many years working for Walt Disney Studios in Sydney. During his years at Disney, Alexs was the Unit Director for Bambi II and Tarzan II, Award winning Supervising Animator on Lion King 1½ and Senior Character Animator /SFX Supervisor on many other Disney titles. Following his years at Disney, he directed two seasons of the animated comedy show Planet Sketch for Aardman Animations (known for Wallace and Gromit). He later joined Zack Snyder on Legend of the Guardians as Head of Story, part of the director’s unit at Animal Logic. Alexs then moved to Flying Bark Productions to direct The Woodlies,. Following this, he was the ideal choice to direct Maya the Bee Movie, Flying Bark’s first ever 3D animated feature film. Since wrapping production on Maya, Alexs has taken on the role of Creative Director for Flying Bark, overseeing development on all feature film, television and digital media projects. Alexs was also the Co-Director on the highly anticipated upcoming animated feature film, The Blinky Bill Movie and is currently working as director on Flying Bark’s latest production 100% Wolf.

Fin Edquist is the recipient of several feature film development grants from the AFC and Film Victoria. His writing credits include Maya the Bee Movie, McLeods Daughters and Home and Away, as well as Blinky Bill The Movie. Additionally, Fin story-produced and wrote the third series of Rescue Special Ops, and script-produced Tashi. His short film Mendel’s Tree premiered at Palm Springs International Short Film Festival in 2009. His previous short film Toxicman premiered at the Melbourne International Film Festival, 2009. He was one of twelve directors invited to participate in the Frontieres international film market at the Fantasia Film Festival (Montreal, 2012). Current projects include 100% Wolf.