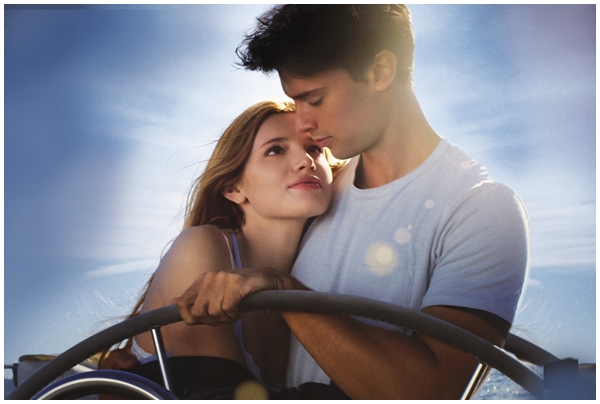 If you’ve ever loved anybody in your life, this story’s going to have a significant impact on you.

Midnight Sun tells the life-affirming story of 17-year-old Katie Price, sheltered since childhood with a rare disease that makes even the smallest amount of sunlight deadly, and chooses to live life to the fullest when she falls in love, sharing a love that will change them – and those around them – forever.

Midnight Sun is based on the Japanese film Song to the Sun, (known in Japan as Taiyō no Uta).  A heartbreaking tale of love, dreams lost and realized, the film is directed by Scott Speer (Step Up Revolution) from the screenplay by Eric Kirsten.

Eric Kirsten  began his career in entertainment and media as an assistant in the motion picture development group at Universal Pictures. He subsequently co-founded a series of new media startup ventures, including Fanzter, which was acquired by the Walt Disney Company, and also served as the head of college basketball programming for ESPN and ABC Sports. Prior to Midnight Sun, Kirsten’s spec screenplay The Lighthouse was selected to The Black List. He is a graduate of Duke University and Georgetown Law School.

“I love fairy tales,” says director Speer. “The script was sent to me by John Rickard, one of our producers.  Right away, when I read it, I felt like it was a grounded, real-life, contemporary version of the Cinderella story with shades of Rapunzel.  Katie is trapped in her room and cannot be outside when the sun comes up.  She must use special UV protection over her windows. I think we’ve all looked out of our windows at different points in our life and felt we can’t connect, or we can’t relate to the world outside, until someone comes along and opens that up for us.”

“It’s a classic tale of being trapped away from the rest of the world while watching others experience life,” says the director. “Here you are, and you can’t be a part of any of it. It felt to me like that was something that, in this particular case, is so unique to Katie Price — Bella’s character — and yet so universal.”

Scott Speer began his career as a director of music videos, commercials, and television projects before making the transition to feature films.

Born in Monterey, California, and raised in San Diego, Speer graduated USC with a bachelor’s degree in Cinema-Television. Soon afterward he created acclaimed videos for artists such as will.i.am, Jordin Sparks, and Jason Derulo among many others. Speer was honored with a 2006 MVPA Award for Directorial Debut of the Year for the video Stars by Switchfoot, and in 2007 won his first MTV Video Music Award for his work on Bella Traicion by the Mexican pop sensation Belinda. Commercials followed, with national campaigns for Colgate, Sara Lee, and Buick. Additionally, Scott was honored by the Gospel Music Association with two Dove awards for Stars and tobyMac’s Boomin’.

Speer made his feature film directorial debut with 2012’s Step Up Revolution, and in 2014, was an executive producer on Step Up: All In. He is currently in post-production on his third feature, Status Update,.

After Status Update, Speer will reunite with Midnight Sun star Bella Thorne and will direct Break My Heart 1000 Times, a supernatural romantic thriller set nine years after an apocalyptic event that killed millions and left the world inhabited by ghosts.

As a novelist, Scott released the 2012 young adult novel Immortal City, about a world in which celebrity culture revolves around supernatural beings, specifically guardian angels. In April 2013, Speer released his book Natural Born Angel and concluded the trilogy with Battle Angel in 2014.

“Katie has an extremely rare disease,” reflects Bella Thorne. “My character has spent her entire life indoors.  She’s grown up inside her room. She can’t go out in the sunlight at all, because if she does, she’ll die. She fantasizes about meeting the boy she has admired for years all these years. She has been secretly in love with him her whole life. The night that they finally meet, sparks fly, and from there, begins this whole crazy, epic, beautiful love story.”

Thorne adds, “What’s really great about the story is that the character is so innocent. Her love for Charlie is so pure, from secretly watching him her entire life.  It’s really not like most love stories.  Katie’s a regular girl who has her heart set on this boy, who she believes that she’ll never, ever be able to be with.”

“What drew me to the role is, I wanted to tell a story that no one’s told before.  I wanted to shine a light on it,” Thorne says. “Most people don’t even know that this disease exists. I wanted to play this character that’s so closed off from the world, she’s never even experienced being outside in the sunlight.”

“It was a no-brainer for me to work on this project,” says Schwarzenegger.  “First of all, I fell in love with the script and with the love story aspect of it, and how my character figures out the issues in his life by giving Katie her life. I went in for the audition, and the filmmakers had me do what they called a ‘chemistry read’ with Bella. From that, we knew we could create a good love story, and a great project together.”

The genesis of Midnight Sun goes back to producer John Rickard and his team, in looking for great material, choosing to adapt Taiyō no Uta (or Song of the Sun), a Japanese movie directed by Norihiro Koizumi starring the artist and singer Yui. In the film, she plays the role of Kaoru Amane, a 16-year-old girl who has Xeroderma Pigmentosum (XP), a disease that makes the ultraviolet radiation of sunlight lethal to her. Yui’s character is partly based on herself, in the sense that the main character is a singer and guitarist, and she performs three of Yui’s songs in the movie; “It’s Happy Line,” “Good-bye Days” and “Skyline.”

After the screenplay had been adapted and developed, director Scott Speer was brought on board by the producers.  Speer says, “I purposefully didn’t watch the Japanese movie, the original, until we were already in production. The number one thing I didn’t want to do was try and make a film that was just an outright copy of another movie.  So I thought, not only for myself but for everyone involved, that even though the story is adapted from the Japanese version, we wanted to make our own movie that lived and breathed as its own film.”

“I had tremendous support and encouragement from our producers, in doing that.  We really set out to make a movie informed by the script, and make the best movie we possibly could. As we really started to find our film, it was fun then to sit on set and go back and watch clips from the Japanese movie and see the choices that they had made, some were similar, and some very different.”

Speer talks about some of the movies that provided the filmmakers’ inspiration.

“There were movies that I looked to as an influence. I’ve always been a fan of love stories. So I tended to watch movies like Splendor in the Grass and some of the original love stories that birthed this genre.  The performances in those movies are so timeless, and that’s an element that I wanted to capture.  It was about trying to find our place in that spectrum of love stories. Then there are more modern films, of course, that really capture, the feeling of a ‘first love’ in that very special way. Baz Luhrmann’s Romeo + Juliet, for example, or Moulin Rouge, another great movie that I think accomplishes that.   I aspire to do something that is part of that canon. The Umbrellas of Cherbourg was another one that was vital to me, because it’s a musical as well as a great French love story.”

Director Speer talks about his relationship with his director of photography, Karsten Gopinath, known professionally and to his friends simply by the moniker ‘Crash.’

“Crash was my DP on this movie. He and I shot Step Up together, which also had a large love story component. He read the script and actually responded right away, and had the same vision that I had. Crash was interested in visually articulating the concepts of light vs. darkness in this movie, of keeping out the light: what is light and what is dark?”

Summing it up, Speer adds, “I hope that audiences watching Midnight Sun, first and foremost, are swept up in an amazing and unusual love story. I hope that our movie provides an emotional experience that makes you think about your life. There’s music, and there’s an incredible sort of visual experience, and you get to go to this amazing place, with these people, and see something that you walk away with, in the best of worlds, in that cathartic sense. You’re able to emotionally go through an experience and hopefully you have a great time, and you reflect on your life.”

Thorne adds, “When bad things happen, sometimes it’s for the better, and sometimes it’s not as bad as it feels in that moment.  I think you’ll get that through this film. It’s not a sad, romantic love story, but there are some deep feelings in it.  I hope it brings light to people.”

“It’s just a unique story,” says Riggle.  “And it’s so well told. If you’ve ever loved anybody in your life, this story’s going to have a significant impact on you.”