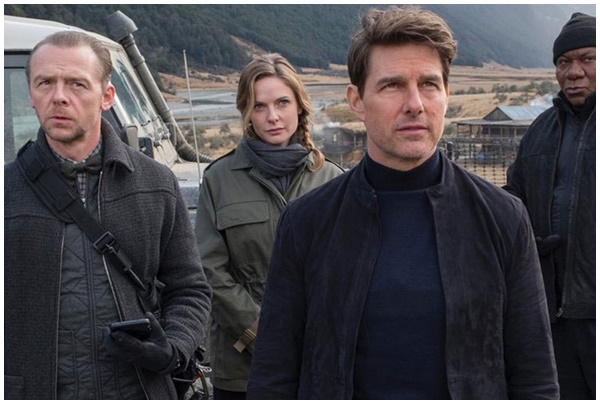 Over the past two decades, Tom Cruise has produced, starred in and performed in the most mindblowing stunts in the Mission: Impossible films, a global cultural phenomenon that has grossed more than $2.8 billion worldwide, making it one of the most successful franchises in movie history.

Now he returns for a sixth film in his role as Impossible Missions Force (IMF) team leader Ethan Hunt in Mission: Impossible – Fallout.

According to Cruise, Mission: Impossible – Fallout is a culmination of all of the previous films in the series. “You’re going to see characters brought back and storylines brought to a conclusion,” he says. “At the beginning of the film, the book The Odyssey was chosen for a very specific reason. The journey my character, Ethan Hunt, and his team go through is an odyssey inspired by and reflective of that story. It’s an epic personal tale, and there are enormous emotional stakes for the characters.”

The best intentions often come back to haunt you. Mission: Impossible – Fallout finds Ethan Hunt (Tom Cruise) and his IMF team (Alec Baldwin, Simon Pegg, Ving Rhames) along with some familiar allies (Rebecca Ferguson, Michelle Monaghan) in a race against time after a mission gone wrong.

Christopher McQuarrie is an Oscar-winning writer, producer and director whose credits include The Usual Suspects, The Way of the Gun, Valkyrie, Jack Reacher and Edge of Tomorrow.

McQuarrie grew up in Princeton Junction, New Jersey. In lieu of college, he spent the first five years out of high school traveling and working at a detective agency before moving to Los Angeles to pursue a career in film.

Three years later, his screenplay for The Usual Suspects garnered him the Edgar Award, the Independent Spirit Award and the British and American Academy Awards.

In 2000, he directed The Way of the Gun, starring Ryan Phillippe, Benicio Del Toro and James Caan. In 2008, he produced and co-wrote Valkyrie, starring Tom Cruise.

McQuarrie reteamed with Cruise for his sophomore directorial outing, Jack Reacher, in 2012. Within hours of completing the film he was at work with Cruise again, this time rewriting the script for Doug Liman’s Edge of Tomorrow. It was while working on Edge that Cruise suggested McQuarrie direct what would become Mission: Impossible – Rogue Nation.

Cruise, who launched the franchise in 1996, brings an unparalleled understanding of what makes a Mission: Impossible film work, observes screenwriter and director Christopher McQuarrie. “Tom is the keeper of the flame. He’s an instinctive, very emotional filmmaker. He knows Ethan Hunt, and he knows what makes him an appealing character on a truly instinctive level.”

McQuarrie believes one of the reasons the franchise remains so popular is Cruise’s insatiable desire to make each film more thrilling and intense than its predecessor. “It never stands still,” says the director, who also directed 2015’s Mission: Impossible – Rogue Nation. “But most importantly it never forgets the audience. Tom is first and foremost an entertainer. Everything he’s doing in the movies is to take you places you’ve never been, to show you things you’ve never seen, and to put you in the experience right there with him.”

For Mission: Impossible – Fallout, McQuarrie was eager to explore a darker and more human side of the film’s central character. “Ethan has always been a bit of a mystery,” he observes. “This time I wanted to be more inside his head and feel his connection with other people. The title refers not only to nuclear fallout but also to the fallout of all of Ethan’s good intentions. He has walked into a situation beyond his control, and he has to go through it even though he knows he’s being manipulated.”

At the heart of the story is a wrenching decision Hunt makes that comes back to haunt him, explains Myers. “In the beginning, we find Ethan in a tough place. He has made a mistake, and he’s encountering elements from his past that have emotional connections. He has to decide: Does he save his friends and family or save perhaps millions from the destructive forces he’s up against? He has a lot of soul searching to do.”

Cruise embodies his character in a way that few action stars ever have, adds producer Jake Myers. “Tom not only brings great drama to the role, but he has the physical ability to do things another performer would not, both by his training and his daring. I think you can probably separate most other action franchises from their stars, but without Tom there really isn’t an Ethan Hunt, at least not the one audiences worldwide have so wholeheartedly embraced.”

At Cruise’s request, McQuarrie became the first filmmaker ever to return to direct a second Mission: Impossible film. “One of the signature elements of the franchise is that there has been a different director for every movie,” McQuarrie explains. “When Tom asked me to come back and direct this one I said I would do it on the condition that I could maintain the spirit of that tradition by completely changing the visual language from the previous film. I want people who watch Rogue Nation and Fallout to feel like two different people directed them.”

That was fine with Cruise, who has had a deep admiration for McQuarrie’s ability as a filmmaker since the pair first collaborated on the 2012 action thriller Jack Reacher. “I love working with McQ,” says Cruise. “He is enormously talented. He wanted to change the visual style so it would be as though someone else had directed it, and he succeeded. But it still has his bold storytelling sensibility. I love the toughness of the movie and the characters. We pulled out all the stops. I can’t wait for audiences to see it.”

Over the course of working together on three major action films, McQuarrie and Cruise have developed a close personal and professional bond. “They have a great verbal shorthand,” notes Myers. “In McQuarrie, Tom has found someone he trusts and is very comfortable with. The two of them are constantly working on things, always changing things, which makes it harder to produce but ultimately makes a much better film.”

True to form, McQuarrie, an Oscar winner for his screenplay for The Usual Suspects, continued to make adjustments to the story even as filming progressed. “Chris keeps the script alive,” says actor Henry Cavill. “He’s a very good writer and extremely intelligent when it comes to characters. He is excellent at putting them into enormously stressful situations that they survive by growing, adapting or evolving. I quite enjoy that as an actor because you are constantly moving and adjusting, much like humans in real life.”