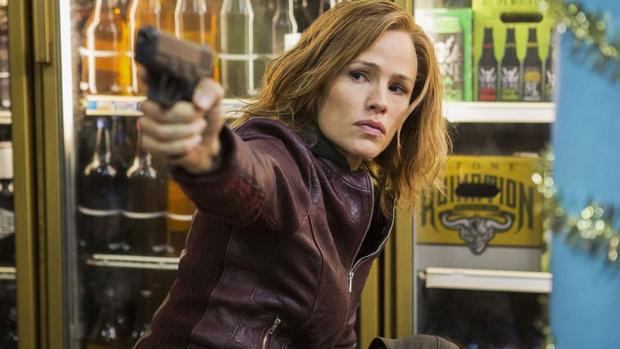 At the heart of the film is the debate of the difference between revenge and justice and where humanity exists between the two.

Upon their first reading of a new-to-marketplace original screenplay entitled Peppermint, producers Tom Rosenberg and Gary Lucchesi of Lakeshore Entertainment were captivated by the journey of one woman’s dramatic transformation from ordinary woman to justice-seeking vigilante. Recognizing the notable absence of engaging films with a strong female protagonist at the center, they knew they had to act fast. After receiving the script on a Thursday, they made an offer on Friday and the project was theirs by Monday.

The screenplay, written by Chad St. John (London Has Fallen), was especially appealing because of the filmmaker attached. Accomplished action director Pierre Morel, who launched the Taken franchise and single-handedly re-defined the perception of the action hero, was attached to direct. “I was looking for a female-driven action movie and found the idea compelling,” says Morel. “For me, it’s all about the emotional journey, there’s no reason for the action if there’s no emotional motivation behind it.”

“We knew we had to close the deal as quickly as possible so I called the head of the agency on a Saturday, which I don’t often do, and pushed to close the deal Saturday night,” recalls producer Gary Lucchesi. “By Monday morning three or four other studios wanted it, but thankfully we recognized it was prescient that we act aggressively.”

A filmmaker with a deft hand at compelling and intense action-oriented material, Director Pierre Morel approached Peppermint with an equal emphasis on the drama as the action. Reeling from unimaginable loss, Riley North channels what little she has left into exacting justice in the name of her family. “It’s all about the emotional journey for me, there’s no reason for the action if it isn’t as interesting as the drama,” argues Morel.

Morel was fascinated by the themes explored in the story and how experiencing extreme emotional trauma can be transformative. “Riley’s not what you always expect  from a hero in movies where they were often something else before, a spy or a military operator or something. She was just a regular woman and the trauma she experiences changes her into something else, a woman focused on justice. Trying to figure out how a regular human being reacts when hit with such a dramatic and brutal situation was compelling to me.”

With a heroine at its center, Peppermint offered an opportunity to celebrate a protagonist not typically seen leading an action film.

Producer Tom Rosenberg explains, “The script was smart and unflinching and had a great centerpiece role for an actress. We were looking for someone the audience would root for and who better than Jennifer Garner?”

“I loved that it was an original story and an action film with a woman as the lead character, the significance of which I do not take lightly,” recounts actress Jennifer Garner, who jumped at the opportunity to play the fierce protagonist. Garner continues, “I’ve never had the chance to explore that kind of visceral need to defend or protect my family in a film, but the concept was something I could easily connect with.”

The intense physicality of the role gave Garner the opportunity to build on her extensive action pedigree after a lengthy break from fight and stunt choreography.

After years as super-agent Sydney Bristow on the wildly popular television series, “Alias” and action-heavy feature films such as Elektra and The Kingdom, Garner’s focus shifted to more dramatic work. Ready to make a return to action, playing Riley offered Garner the opportunity to challenge herself in ways that combined both her dramatic and action experience, something she felt ready to do. “I hadn’t filmed a fight sequence for over eleven years, which is a long time to hang up your action chops and try to pull it back together, but I knew I could do it. It was the connection to the physical that helped me channel Riley’s desperation and the emotional motivation behind her need for revenge,” explains Garner.

“Because Jennifer is a mother herself, she was able to tap into the emotional chords of her character Riley. The love a mother has for her child is fierce, like a mother lion who will protect her young until the very end,” argues Lucchesi. The filmmakers knew that audiences were clamoring for Garner’s return to the genre.

“This role feels like it came at the exact right moment in her life, she truly is that kind and committed Mom who lives for her family and has a deep connection to the emotion of the story. That connection helps us believe that after such terrible loss someone could snap and come back as somebody else and basically take out everybody involved,” laughs Morel.

Riley’s motivation and methodology are atypical within the revenge thriller genre and flips the definition of the action hero on its’ head. The film raises questions of the moral complexities surrounding the concept of justice.

“Vigilante justice is interesting from a social perspective,” argues producer Richard Wright. “You don’t want to see vigilantes going around exacting their own justice, but there are certainly a lot of people out there that deserve better protection than what the law provides. Granted, this is a movie and because we are in a fictionalized world we can take it to an extreme, but the basic threads of all of this are in society everywhere and every day.”

At the heart of the film is the debate of the difference between revenge and justice and where humanity exists between the two. It asks what would you do with unimaginable loss in the face of blatant corruption? “I don’t know if this version of justice fills the hollowness in Riley’s soul,” argues Garner.

“At our very first meeting Pierre and I discussed whether or not revenge is ever appropriate and questioned if what Riley is doing is ok,” says Garner. “It’s an interesting and complicated subject to explore within the fictional narrative of an action film.” “Revenge is a very dark engine that never pays and doesn’t bring anybody back. But for Riley it’s more justice than revenge. She is executing a form of justice that actual justice wasn’t able to provide, debating whether it’s good or bad is part of what makes it compelling,” notes Morel.

Setting Peppermint apart from the typical action fare is Riley’s practice of targeted vengeance with minimal collateral damage. She has a list of names and goes to great effort to limit her wrath to only those on her list.

Morel points out that, “Riley doesn’t kill for the sake of killing. She actually wants to see justice done for this so it never happens again. Hurting innocent people in the process is not even an option, she strictly wants to take out the guys who did her harm.”

Riley’s plan to single-handedly take down members of a powerful drug cartel, corrupt members of law enforcement and the corrupt participants from the judicial wing is essentially a suicide mission, one she accepts whole-heartedly. “Riley embraces the journey and doesn’t expect to get out of this alive. In her mind she will be reunited with her family knowing that those who harmed her will not harm anybody else,” comments Morel.

Society finds its structure in a shared value system that provides balance. We hold on to the tenants and ideals that good people are rewarded for good deeds and bad deeds aren’t left unpunished. In Peppermint, society and the criminal justice system fail Riley North.

Director Pierre Morel is best known as the director of Taken, the modestly budgeted French indie thriller that went on to gross nearly $300M worldwide and spawned two sequels and a television series based off his original blockbuster, making it one of the rare indie film franchises in history to gross $1B worldwide.

Prior to Taken, Morel helmed the French language Parkour actioner District B13 which became a cult classic and spawned both a sequel and an English language remake, not to mention having inspired a generation of action films that followed including James Bond’s Casino Royale.

Morel began his career as a cinematographer working with Luc Besson (Taxi), Louis Letterier (Transporter), Nancy Meyers (Something’s Gotta Give) and Jonathan Demme (The Truth About Charlie). His feature work includes the French actioner From Paris With Love, and the international spy drama The Gunman starring Oscar winners Sean Penn, Javier Bardem and Mark Rylance, On the television side Morel directed and executive produced the pilot for both the long running NBC medical series “The Night Shift” (which ran five seasons) and the short-lived sci fi drama “Zero Hour” for ABC. Morel is represented by UTA, Sentient’s Renee Tab and attorney Gretchen Rush.

Screenwriter Chad St.John was just another struggling bartender, until the summer he misused company resources to write a screenplay at work.

Through an odd twist of fate, that script was optioned by Bruce Willis in 2006. Chad immediately disregarded any notion of common sense and moved straight to Los Angeles, determined to take advantage of the opportunity.

By 2009, Chad had signed a two-picture script deal with Warner Bros., and by 2010 appeared on Hollywood’s “Blacklist” twice. Since then, he has sold original feature screenplays to Fox, Paramount, Warner Bros., and Universal, in addition to working on projects at nearly every major & minor studio in Hollywood. He’s also sold TV shows to FOX TV and Cinemax. But, feature films remain his passion.