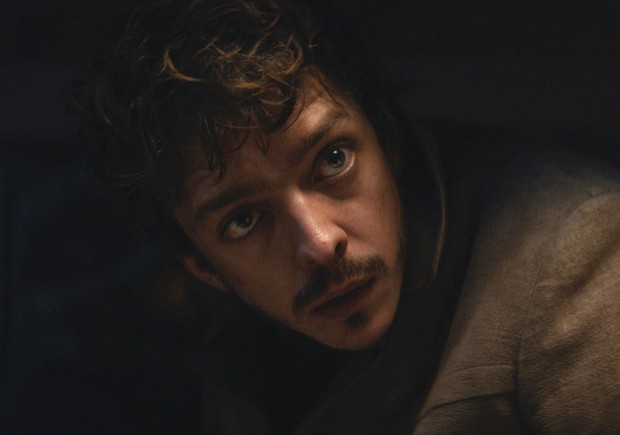 A young Jewish man pretends to be Iranian to avoid being executed in a concentration camp in the Holocaust drama Persian Lessons.

Canadian director Vadim Perelman (House of Sand and Fog) directed from a script by Ilya Zofin, based on the story Erfindung Einer Sprache by Wolfgang Kohlhaase.

WW2 history is replete with innumerable stories from Jewish survivors of the Holocaust. Several books have been written and many movies have captured the atrocities of the Nazis in concentration camps as narrated by these survivors. The gruesome tales were documented by the liberation forces after the end of the War and many survivors helped authorities in listing down the names of fellow inmates whose records were wiped off from the Nazi registers.

Over the years, cinema has given us some remarkable movies about the Holocaust, in which we witness the resilience and tenacity of the human spirit that helped many Jews to survive the horror. There are many stories about Jews using their wit and smart-thinking in order to to survive the Holocaust.

Canadian director Vadim Perelman’s latest film Persian Lessons is based on one such short story written by Wolfgang Kohlhaase.

The film highlights the use of creative thinking, memory and intelligence by a Belgian Jew Gilles (Nahuel Perez Biscayart from Beats Per Minute) in his survival tactic against his Nazi imprisoners. He narrowly avoids execution by a Nazi firing squad when he claims to be Persian. Desperate to save himself, he offers to teach Farsi — a language he does not know — to the head of the camp, played by German star Lars Eidinger (Clouds of Sils Maria). Through an ingenious trick, Gilles manages to survive by inventing words of “Farsi” every day and teaching them to Koch. The particular relationship between the two men sparks the jealousy of other prisoners and SS guards towards Gilles. And while the suspicions of Koch grow every day, Gilles understands that he will not be able to keep his secret very long…

“The film is especially important and relevant in our time,” said Perelman. “It tells a profoundly powerful, heartbreaking story that is infused with tragedy, irony, the kindling of hope and friendship among the unlikeliest in the unlikeliest circumstances. I am honoured and pleased with the opportunity to widen the worldwide audience and fans of the film.”

“We are very proud that the film, which we shot entirely in Belarus and co-produced with Belarusfilm, is the country’s submission for the Academy Awards,” said producer Ilya Stewart, founder of Hype Film. “During this extremely difficult year, in which the film started its journey at the last major film festival to take place before the pandemic and was so well received, we remain optimistic that Vadim Perelman’s unique vision based on Ilya Zofin’s brilliant script will eventually reach an international audience.”

What drew you to this story, and how did you find out about it?

I first heard about “Persian Lessons” from producer Timur Bekmambetov when he shared some of his upcoming projects with me. I fell in love with the project right away. I was very impressed and inspired by it. I immediately realized the potential of the story and the effect it may have on the audience. And I thought: it’s just a wonderful project, I have to get on board!

Is it based on or inspired by a true story?

The film is based on a short story written by Wolfgang Kohlhaase called “Erfindung einer Sprache“. That being said, there are hundreds of similar stories, in which wit and smartthinking enabled people to survive.

I would like to think that “Persian Lessons” is a compilation of these. In fact, a friend of Wolfgang Kohlhaase told him a similar story some years after the war. But it only had some similarities. Kohlhaase’s adaptation used totally different detail.

There are stories that are united in only one thing: they are insane, precisely because it required courage, luck, quick thinking and the help of individuals to escape the relentless pursuit of German fascists and their supporters.

How realistic did you want the film to be and what type of research did that entail? How did you recreate the camps, for example?

I wanted the film to be very realistic, that’s why we did quite an extensive research to know what the transit camps looked like, how long did the people stay in there… We were inspired by a camp called Natzweiler Struthof that was located between France & Germany, in the North East of France. We also did a patchwork of other elements from a selection of various camps: the main gates in our movie were from Buchenwald,
for instance. We recreated our transition camp based on different photos and video footage that we found. We tried to make it as truthful and as authentic as possible.

What made you choose Lars Eidinger and Nahuel Pérez Biscayart for your main protagonists? (Especially for Nahuel, since this is quite a departure from his previous roles!)

Both Lars and Nahuel are outstanding actors. They have accumulated their experience in other films and were wonderful and perfect for the roles. They were our main choices from the start, I couldn’t even imagine anyone else playing Koch and Gilles.

Especially now, looking back, it’s impossible. Lars and Nahuel inhabited their characters, they lived in them.

I’m glad that Nahuel could embrace this new role, I think change is always good! I trusted him to do it, even though he has never tried anything like it.

What preparation did the actors have to go through for the roles (did Nahuel speak German, for instance?)?

Yes, of course, they did a lot while preparing for the film. Lars Eidinger and Alexander Beyer (who played Commandant) knew a lot about the history of concentration camps. Nahuel spoke German, Italian, Spanish and French, which made it easier for us, as his character had to be bilingual. Nahuel’s native language is Spanish, he is from Argentina. He was incredible, the way he picked up the language and pronunciation is just out of this world.

He was actually very good at speaking German, my German friends and co-workers were really impressed. The way he learns a language is truly a talent. We had great help from our history consultant Jörg Müllner, who was constantly in touch with our German actors regarding the way Nazis would behave and act.

One very strong theme of the film is memory, especially emphasized in the opening and closing scenes: memorizing a language, and the role of language in memory, especially since so much evidence has been destroyed before the end of the war. Can you tell us about that?

Memory is one of the strongest themes in the film, as also inventiveness. I think human inventiveness and what the strong human spirit can do to survive are truly amazing. I think you can actually feel it in the script. And the incredible outcome of this story is that the way Gilles transforms prisoners’ names into foreign language words is immortalizing them. During the war, there were all those people who have vanished completely and remained unknown because all the archives and all the registers of the camp were burnt by the Nazis.

The film is also about the link between language and immigration: you had to learn English before immigrating to Canada as well, what does that process of learning a language mean to you, and why is it important in that story?

I think particularly immigration in this film only applies to Hauptsturmfuhrer Koch as he wants to immigrate to Iran in order to open a German restaurant which is his sacred dream. He realized he must know the local language in order to be able to survive in a country, to be functional. He has to fit in, he has to adapt, assimilate and he has to make his accent disappear.

The film depicts a complex, uncomfortable relationship, based on mutual interests but that at times seems to go deeper than that: what did you try to show through that relationship?

I always try to see my characters from a different angle and see their various shades. I wanted to show the transformation Koch goes through: he is able to communicate things in the invented Farsi language, things he couldn’t say in German, taboo things.

It’s not a coincidence that when Gilles asks him “who are you?” in fake Farsi, he doesn’t answer “Hauptsturmführer Koch”, he says “Klaus Koch”.

So I found it fascinating to portray the growth of this person, his humanization and the fact that through this language he is able to reach and show certain parts of himself that he wasn’t able to perform in German.

You succeed in making the spectator at times empathize with all the characters of the film, especially the officer trying to learn Persian: how did you achieve that, and was that important for you?

Absolutely, It was important for me. I’m trying to do it in all my films. I’m trying to create characters that are worth our empathy. How have I achieved that? I think, through humanization.

There are films that show Nazis as robots, automatons, screaming, speeding, horrific, evil, and very one-dimensional characters. And I think we can’t forget that they were people too. They were loved and they were jealous, they were scared – they had all human qualities. And that in a way makes their acts even more horrific.

Many films have been made about WWII: did you draw inspiration from any specific film or director, and how did you want to distinguish this film from others about that same period of time?

No I didn’t really draw any inspiration from other films or directors. It’s a unique story which was turned into a unique script which I hopefully was able to turn into a unique movie.

Watching the film, Victor Klemperer’s book, The Language of the Third Reich, comes to mind. Was the contemporary political discourse an inspiration for this story?

Nope. It wasn’t. The book actually was quite unknown to me until I read this question and I was fascinated to read it. So thank you for that recommendation.