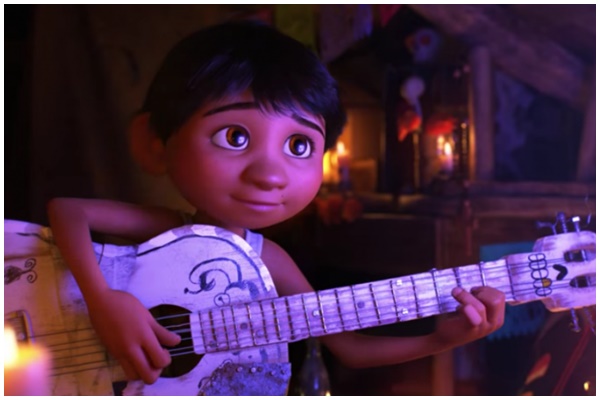 “‘Coco’ is about a 12-year-old boy with big dreams,” says director Lee Unkrich. “It’s about a hardworking family with great traditions and a lot of love. But what’s so cool about ‘Coco’ is that the boy could be my son. That family could live next door. The sweet, bossy grandmother who insists on one more bite might be your grandma. There’s something familiar to us all in this story. That’s what makes it so special.”

The universal theme of family resonated with filmmakers.

“We are all part of a family,” says co-director and screenwriter Adrian Molina. “Those relationships are beautiful and complicated. But our family shapes who we are, which made us wonder—if you had an opportunity to meet your ancestors, what would you recognize in them that you see in yourself?”

Adds Unkrich, “We recognized a common need to be remembered—to feel that we’ll matter long after our time here. Likewise, there’s a strong desire to keep alive the memories of our loved ones. By sharing their stories and creating our own, we build this connection across generations that is bigger than our day-to-day lives.”

The film introduces Miguel, an aspiring singer and self-taught guitarist who dreams of following in the footsteps of his idol, Ernesto de la Cruz, the most famous musician in the history of Mexico. But Miguel’s family forbids music. Many years ago, his great-great-grandmother and great-great-grandfather came to an impasse: She wanted to raise their family together in Santa Cecilia, but he couldn’t let go of his dream, leaving his family behind in his quest to be a musician. Passed down from generation to generation, great-great-grandmother Mamá Imelda’s consequent ban on music is strictly enforced—much to Miguel’s dismay.

“When Miguel unearths a secret from his family’s past—a connection to Ernesto de la Cruz, he rushes to share the news with his family, thinking it will clear the way for him to be a musician,” says screenwriter Matthew Aldrich. “To his surprise, it only makes matters worse.”

Adds Molina, “Miguel feels like he has to choose between his passion for music and his love for his family. He really wants to share his talents with his family—to prove to them that making music is both beautiful and honorable. But he goes about it the wrong way.”

Miguel’s impulsive actions spark a magical event that renders him visible only to those who have come to visit from the Land of the Dead on Día de Muertos, also known as Día de los Muertos. This lively and colorful parallel world is populated by generations and generations of people who long ago left the Land of the Living, including Miguel’s own ancestors, who instantly recognize him and offer to help—but only if he agrees to give up music forever. “That’s just not something Miguel can accept,” says producer Darla K. Anderson, “so he teams up with a scrappy, streetwise skeleton named Héctor and they set out to find Ernesto de la Cruz—who they believe holds the key to Miguel’s baffling and decidedly unmusical family history.”

Fortunately, the Rivera family’s ban on music doesn’t extend to the film itself. “I love the irony,” says Anderson. “We have a family with this inexplicable objection to music who live in a country that’s rooted in it. In ‘Coco,’ we pay homage to all different styles of Mexican music.”

According to Anderson, authenticity was important. Filmmakers wanted to ensure that the film’s music not only sounded genuine, but looked genuine, too. “We used footage of musicians as reference so that when Miguel strums his guitar, it looks right. We recruited a number of talented musicians from Mexico whose ability to pour their hearts into this music makes all the difference in the world.”

Set in Mexico, “Coco” features two distinct worlds: the Land of the Living and the Land of the Dead. Miguel and his family hail from Santa Cecilia, a charming town with a bustling central plaza where residents congregate. The look and feel of Santa Cecilia is inspired by villages visited by the filmmakers during research trips—but those trips did so much more.

“The story of ‘Coco’ is inspired by Mexico’s people, cultures and traditions,” says Unkrich. “The people of Mexico made us think about our own families, our own histories and how that makes us who we are today. We are grateful for the opportunities afforded to us, and we can honestly say we are different people as a result of our experiences.”

Pixar Animation Studios explores a wide range of worlds in its films—from Paris to the Great Barrier Reef, space to Monstropolis. Research is the cornerstone in creating these fantastical, yet believable worlds and the characters who inhabit them—whether that means deconstructing classic toys or figuring out how many balloons it would take to lift a house off of the ground.

For “Coco,” filmmakers wanted to immerse the audience in the culture that would anchor their story. They approached their research from many directions—enlisting consultants and experts, studying Mexican art, film and music, and traveling throughout Mexico to experience the traditions, meet the people and see firsthand where their characters would live.

Filmmakers collaborated with a team of cultural consultants, including political cartoonist Lalo Alcaraz, playwright Octavio Solis and heritage and arts author, independent producer and advocate Marcela Davison Avilés. The consultants, whose families all hail from Mexico, weighed in on everything from character wardrobe and sets décor to the color palette and even dialogue—encouraging a fluid blend of Spanish and English within the script in a way that required no translation. “That reflects our upbringing,” says Solis. “We grew up in bilingual households. We spoke Spanish and English in the schoolyard interchangeably.”

Solis, who’s worked in the Bay Area arts arena for three decades, says filmmakers welcomed his honest opinions. “I don’t always toe the party line,” he says. I’m aware of what people in my culture desire in order to grow and become more involved in the fabric of the American experience.”

Solis encouraged filmmakers not to take the characters in the Land of the Dead too seriously. “Our approach to honoring our ancestors is lighthearted—if someone was a real pill in life, she’s probably a pill in death, too. I think the film captures that very well.”

Alcaraz, the nationally syndicated editorial cartoonist behind the comic strip La Cucaracha, supported the filmmakers’ efforts to lean into the family theme. “Latinos have strong family structure—family is number one,” he says. “That’s what I love about ‘Coco.’”

“It’s a universal story about a family’s enduring love for each other,” adds Avilés. “While there is a profound cultural homage taking place during Día de Muertos—it’s important to understand the celebratory aspects of the holiday and that the children in the film are happily taking part in the celebration.”

“People are going to understand this culture—these traditions—a lot more after they see this film, because Pixar has done its research,” says Alcaraz.

According to Avilés, who also curates and produces Mexican heritage cultural arts programming, the most important thing filmmakers did in their quest for an accurate and respectful representation of the Mexican culture in “Coco” was awareness that it needed to happen. “Then they acted on that awareness,” she says. “They took the time to try to understand. They listened to experts from many different fields—archeologists, musicians, cultural advocates. And they embarked on numerous research trips. It was all done with utmost sincerity, respect and humbleness.”

“As soon as we decided that we wanted to tell a story that takes place in Mexico, we immediately booked our first research trip,” says director Lee Unkrich. “Over the course of three years, we visited museums, markets, plazas, workshops, churches, haciendas and cemeteries throughout Mexico. Families welcomed us into their homes and taught us about the foods they enjoy, the music they listen to, their livelihoods and their traditions. Most importantly, we witnessed the importance they place on family.”

That, according to Unkrich, is what ultimately sparked the story audiences will see on the big screen this Thanksgiving. “We really wanted to explore the family bonds that tie us to the generations that came before us,” he says. “This story is about celebrating our past—even as we look to the future.”

Unkrich traveled with producer Darla K. Anderson, production designer Harley Jessup and story supervisor Jason Katz to Mexico City in 2011. The team visited Mexico City’s Museo Dolores Olmedo to see the altar dedicated to Pedro Linares, the local artist who created the papier-mâché figurines named alebrijes in the late 1930s following a bizarre fever dream. The filmmakers were so enamored of the vibrant figurines that they vowed to include them in the film one way or another.

The trip also included time spent in Oaxaca, where they visited Santo Domingo church and cultural center, as well as the Tlacolula Market and El Árbol del Tule, an enormous Montezuma cypress tree estimated to be as old as 3000 years. Filmmakers toured the village Teotitlán del Valle and also saw alebrije artist Jacobo Angeles’ studio. A highlight was Monte Albán, where they saw ruins of great plazas, pyramids and tombs, which served as reference for the vertical design of the Land of the Dead.

While in Morelia, the team saw Plaza Morelos, Tarascas Fountain and the Aqueduct Morelia, which would later serve as reference for the film’s impressive marigold bridge that spans between the Land of the Living and the Land of the Dead. They visited the Palacio de Gobierno and Cathedral in Guadalajara’s historic center. On Día de Muertos, they went from Pátzcuaro to Santa Fe de la Laguna to visit “Casa del Muerto del Año.” A local family welcomed them into their home for dinner, and they spent time in the beautifully decorated cemeteries at Tzintzuntzán.

Though the film was still in its infancy, the pictures taken proved valuable years later. “We were so inspired,” says Jessup. “It was early in the process and we just soaked it all up, capturing images we knew we’d use in any version of the story. The Mexican skies, the cobblestone streets, the gorgeous embroidered fabrics, the food on the ofrendas—we brought all those images back.”

Unkrich, Anderson and Jessup were joined by director of photography-lighting Danielle Feinberg and sets art director Nat McLaughlin, among others, in Mexico City, Oaxaca, Tlacolula, Tlalixtac, Abasolo, Guanajuato and Santa María del Tule. “We focused more on Oaxaca and Guanajuato on our second trip,” says Anderson, whose favorite parts of the trip were spending time with families. “They welcomed us into their homes,” she says. “They are the least guarded and most generous people I’ve ever met. We were treated like any other villager or a member of the family. ‘Come in. Eat with us. Laugh with us.’ They made tamales and traditional soup called pozole. It was truly lovely.”

The team took in more altars, markets, haciendas, gardens, churches and plazas—which inspired the film’s fictional city of Santa Cecilia. They saw mariachis performing at Salón Tenampa in Mexico City, and stumbled upon a comparsa—or parade—in Oaxaca. On Día de Muertos, they visited the San Juanito, San Felipe del Agua and Atzompa cemeteries. They found the crowds to be lively and filled with music; they fell in love with Xolo dogs.

Feinberg returned to Mexico in 2013, along with co-director and screenwriter Adrian Molina, character art director Daniel Arriaga, director of photography-camera Matt Aspbury, story artists Manny Hernandez and Octavio Rodriguez and story lead Dean Kelly, among others. This trip was focused mainly in Oaxaca, where the filmmakers returned to some favorite spots and found new treasures, including a chocolate mill. The team visited a huarache (shoe) workshop to garner reference for the Rivera family shoemaking business.