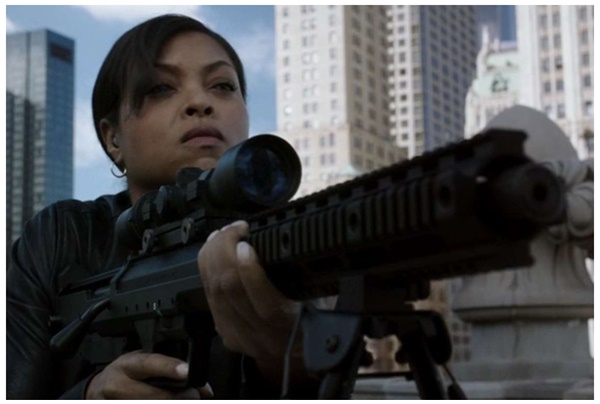 A basic story is about what do humans do when we’re forced to make a change in life and to make the decision to better our lives?

In Proud Mary the life of a hit woman working for an organized crime family in Boston is completely turned around when she crosses paths with a young boy while doing a job.

Producer Paul Schiff “had been preparing Proud Mary for a number of years. The characters are rich and nuanced—this is not a cookie-cutter action movie,” he says.

“Proud Mary started out as an English crime drama set in London,” notes Schiff, “and I’m really happy with how it’s evolved and developed and am thrilled that we got Taraji as Mary. I have always been fascinated by movies like Gloria and The Professional that present how a hard-bitten woman’s new relationship with a young child changes her life. In Mary’s case, her new life with Danny triggers a war with another crime family and leads to her attempt to leave her own family—which seemed like a really fascinating situation.”

“Saving him is a great act of restitution–and through this act of selflessness she’s found a way to save her own self,” notes Producer Tai Duncan. “But after Mary takes Danny off the streets she finds herself in some serious trouble with two very dangerous crime families [her own (the Spencers) and their competition (the Kozlovs)]. And it’s not going to be easy for her!”

“When I first got the script, Mary drove a beat-up Jaguar. I remember getting the rewrite while I was doing Empire, and I was like, my Maserati?” laughs Taraji P. Henson, who plays Mary.

Acclaimed Iranian-Swedish film director, Babak Najafi won the award for Best First Feature with his film, Sebbe, at the 2010 60th Berlin International Film Festival. In 2012, he directed the sequel to massive local box office smash, Easy Money aka Snabba Cash, which was acquired by Weinstein Co for their Martin Scorsese presents label. In 2013 he directed Olympus Has Fallen, starring Morgan Freeman & Gerard Butler, which grossed $206M at the box office.

Screenwriter Christian Swegal is a Los Angeles based writer / director whose work reflects a diverse background of disciplines. After studying film at the University of Southern California, Swegal’s understanding of design and visual effects lead him to a series of directing accomplishments in music videos and live concerts, working with artists such as Katie Perry, Kanye West, Louis XIV, Gnarls Barkley, and Lupe Fiasco, among others. Since then, he has been creating new and unique visions for both commercials and films. In 2010, his science fiction short film “Stasis” went viral, and was featured in a variety of online magazines, including The Hollywood Reporter, Twitch Film, io9, and Short of the Week. Swegal worked with Gale Anne Hurd’s Valhalla Entertainment to create the science fiction television series “Solar”, which is now in development at SyFy Channel.

Screenwriter John Stuart Newman was a staff writer on the first season of Get Shorty, the premium cable action-comedy series.  For creating the interactive streaming series Dirty Work in 2012, John won a Primetime Emmy for Outstanding Creative Achievement in Interactive Media – Original Interactive Television. He cut his teeth as a dialogue writer for Days of Our Lives for four years, and was part of the writing team awarded a Daytime Emmy in 2012. In addition to his television and film writing credits, John is an accomplished songwriter.  He co-wrote the upcoming independent action thriller A Score to Settle.

Screenwriter Steven Antin is a director, writer and producer who has worked extensively in television, movies, music videos and advertising. He is the Executive Producer and Creative Director on Burlesque, The Live Theater Production, based on the movie Burlesque, which he wrote and directed. The live stage show is scheduled to open in 2019 in the West End/UK and on
Broadway. Following a successful acting career, Antin shifted his focus to screenwriting and producing. Inside Monkey Zetterland, which Antin wrote, co-produced and starred in, was nominated for the Grand Jury Prize at the Sundance Film Festival. Antin also Created and Executive Produced The CW summer series Young Americans.  His directorial debut feature film, Burlesque, was nominated for 3 Golden Globe Awards including best picture.  Steven has sold over a dozen television pilots and Created and Executive Produced two television series, Young Americans and also The Search For The Next Pussycat Doll. Steven currently is attached to Exec Produce and Direct two TV shows in development, both of which he wrote, The Body and Scarlett and the Apocalypse.

“The song ‘Proud Mary’ is about a paddle wheeler that keeps on rolling down the Mississippi,” observes Danny Glover, who plays mob boss Benny Spencer, “but it’s really about the strength of women. In the movie, Proud Mary, this very strong woman is an integral part of a family and the film is about the conditioning that goes on within the family and the roles that each of its members play in making the family function. Now this is a mob family, have no doubt about that; the family demands respect and the cohesiveness of the family is paramount to its success—you don’t leave the family, you don’t get out of the family. There’s a code of honor even if their greatest weapon is violence and death.”

“Mary is a complicated, hardened criminal,” adds producer Tai Duncan. “Smart and efficient, she’s found a way to survive in a very male world. Her ability comes from her intelligence, preparation and being able to adjust on the fly (in many ways she’s more dangerous than the men she works with). But I think she’s come to believe that there can be more to having a life away from the family—it’s not something that she has acted on yet—and it’s only through finding Danny and embracing unrecognized emotions that she comes to really believe that her time to leave is now.”

“Like Danny, Mary was forced by circumstances to take on this life,” adds producer Paul Schiff. “As a child she’d been picked up off the street and trained to kill. The only love that she has ever really known is from this dark, criminal family that cared for her in return for her services as an assassin—and as she gets older that perverse relationship continues.”

“This is a person absolutely numb to life, to love, who is finally awakened,” notes Taraji P. Henson. “We’re so quick as humans to write people off: ‘Oh, that person’s bad,’ after they did one thing—well, with Mary, you can’t say one thing,” she laughs. “But there was this part of life to which she was blind. It’s rough out here and sometimes we don’t make right choices because of our circumstances, the cards we were dealt. Here we have a human just trying to make the best of a bad situation and you’ve got to give her credit for that. You see a killer become a human. Blood starts to pump through her veins—that’s what you see in Mary. You’re watching that
transformation, which is what really what intrigued me, because it’s not, simply ‘Hey, I’m out here just killing people looking badass.’ I don’t ever want to glorify killing people. Babak, our director, was very clear about being careful with the images that we are portraying because whenever you play a character that picks up a gun, you’re playing God, right? And I take that very seriously. So we took great care in how we portrayed these characters.”

Known for portraying characters as diverse as the brilliant, stalwart Katherine Johnson in Hidden Figures and the brilliantly tenacious Cookie Lyon on Empire, Taraji P. Henson describes how she “grabbed the chance to play Mary. I don’t want to repeat characters,” she says. “I played a sniper and cops and detectives, but I never played a hit woman—and that’s very different. Mary is a close-range, hired killer—she’s not ex-military or a street thug. In an elevator she might be all ‘Hi, how are you? Those are nice shoes. Have a great day,’ and five steps out the building it’s pop, pop,” she laughs. “It’s fun and it’s very different because people always see me as nurturing and natural. This woman knows nothing about mothering—and here she ends up with this kid.”

“Taraji is fantastic in the role,” lauds producer Paul Schiif. “She’s so feisty, funny and powerful and she’s just a really fine actress. Even though I’ve been working on this script and thinking about this character for a long time, during production I had the pleasure of being
surprised every day by her interpretation of Mary—fresh, entertaining and surprising and always with a real beat on her humanity. I hope her fans see a version of Taraji that they didn’t expect, especially if they come in thinking they knew everything they could know. Part of the balance of the movie comes from believing that this character really walks in the world—that it’s not complete fantasy, and Taraji plays Mary in a way that you believe that this isn’t an action figure kind of role, some paramilitary fantasy. She’s a real person picked up off the street and trained to kill, but she doesn’t have super powers. She’s not flying on a wire and doing things that defy
physics.”