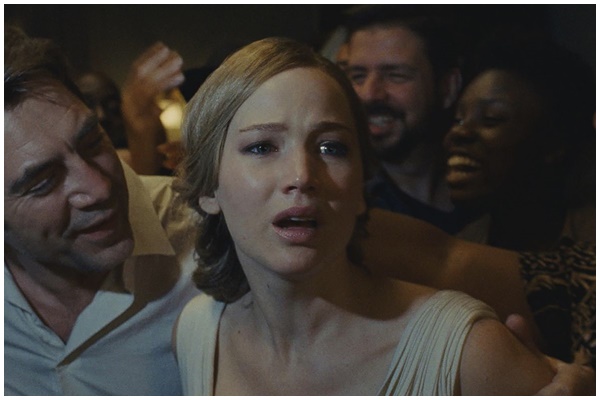 A masterful blend of suffocating atmosphere and winding tension, Darren Aronofsky’s Mother! Is the closest anyone’s come to a spiritual successor to Kubrick’s The Shining; albeit with the important distinction that the story is told from the point of view of the spouse rather than her husband.

The core setup has some similar beats: mother (Jennifer Lawrence) lives in an isolated mansion with her writer/poet husband Him (Javier Bardem), who is battling with crippling writer’s block. When a strange man (Ed Harris) who claims to be a stranded doctor arrives at their door one night, it kick-starts a series of events which throw mother’s perception of her world into disarray.  Read more about the film

Loosely classed as a horror film, one of the great pleasures of Mother! is the artful way in which it builds a constant and accumulating sense of discomfort and dread throughout rather than relying on jump scares.

The film gets under your skin with a disturbing sense of uncanny where there is clearly something wrong, but you can’t quite put your finger on what. Combining extremely unsettling use of close-up cinematography and outstanding sound design, the film makes inventive use of horror tropes to pull the viewer into mother’s psychological breakdown as her world becomes increasingly unhinged.

As with The Shining, the location becomes a central character in the film. Tied to mother’s psychological unravelling, the mansion is a perpetually shifting and nebulous entity.  As the film progresses, it twists into a nightmarish entropic labyrinth.

While Mother! is almost entirely without music, Craig Henighan’s sound design is absolutely outstanding, drawing the viewer into the spatial experience of the house. In a sense, one could listen to the audio without imagery and still come away with a satisfying experience.

Inevitably, one’s enjoyment  of the film is tied to how much you’re willing to grant the leaps necessary to accept the increasingly frenetic  and excessive directions in which the film veers.

Mother!  is understandably divisive in that it intentionally opens itself to a number of interpretations without settling on any one in particular. This slipperiness may be frustrating to viewers who prefer a definitive pre-packaged ‘meaning’, but it is exactly this intertextuality that makes Mother!’s grander themes work so well.

It is certainly not meaningless, but subtly provides a number of different (and conflicting) lenses through which to unpack its imagery.

Different aspects resonate with different people; and  everyone left the screening I attended with a vastly divergent reading of what we had just seen.

Whatever your inclination, Mother! is prime Aronofsky: equal parts disturbing, perplexing and enthralling.

Undeniably unique, it’s likely to linger in your mind long after you leave the cinema.