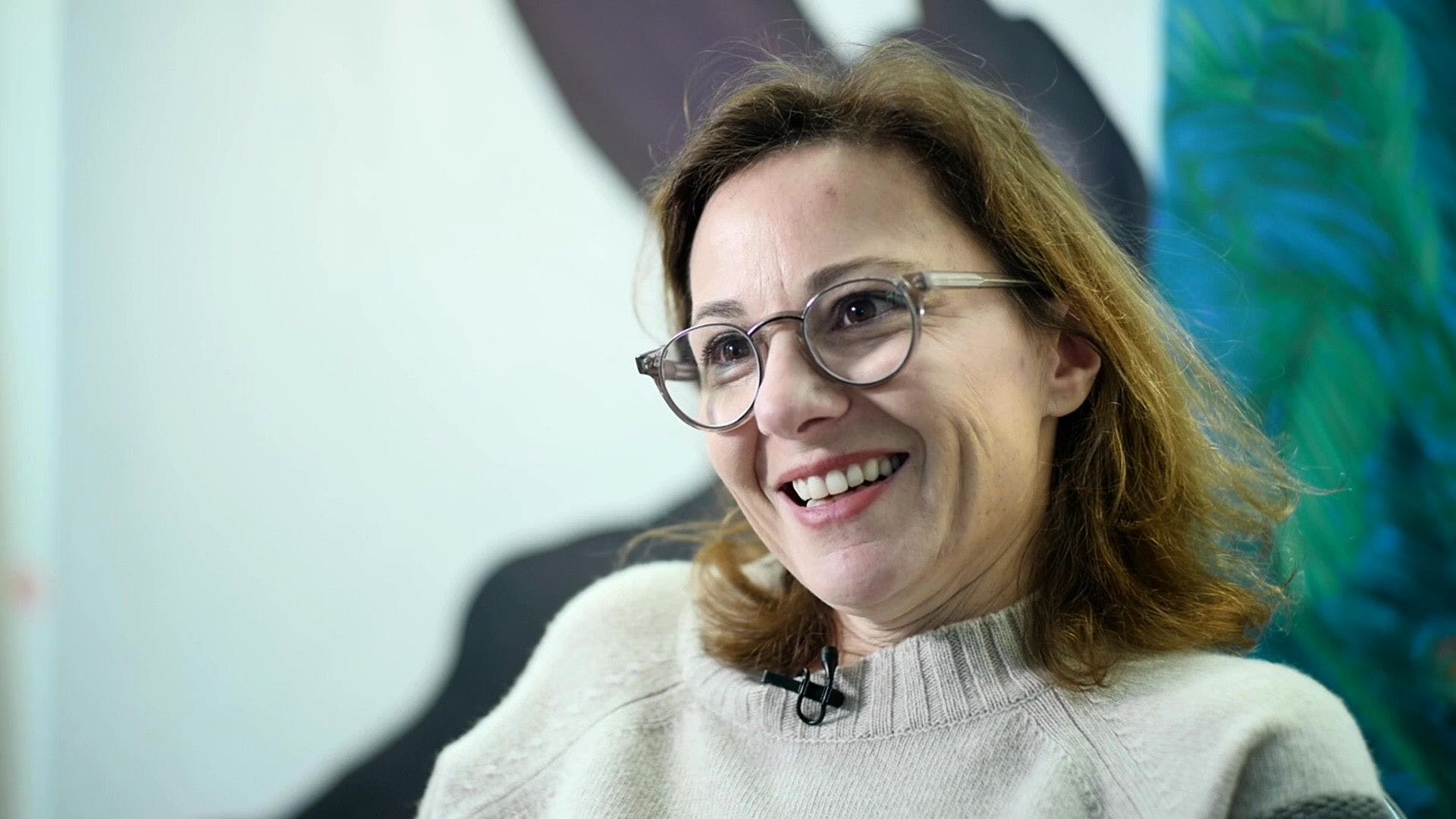 “Eiffel is a love story. But it is also, most especially, a declaration of love. To Paris. To cinema. To audacity,” says screenwriter Caroline Bongrand

How did the idea for EIFFEL come about 24 years ago?

It sprung from a profound desire to make a film.  After publishing a few novels, I travel to Los Angeles to study screenwriting at USC. One of the professors tells us straight off the bat that one of the main activities of a screenwriter is to pitch their ideas to producers. I have two ideas to pitch at my first meeting with a producer, neither of which pan out. As I leave the producer’s office, it turns out I made an impact. The producer asks me back inside. He likes my ideas but the endings do not work at all. Then he asks me, somewhat sarcastically, whether I have anything else. I reply that I do but that it’s too expensive for him. I don’t know why I say this but he immediately wants to know more.  I need to think of something, anything, fast.   I tell him that Gustave Eiffel built his Tower out of love and I am the only one who knows the true story behind this. I’m totally bluffing but it works: he hands me a contract to sign. I’m in a complete panic.

Director Martin Bourboulon talks about Eiffel – A romance with heart

“The long story behind EIFFEL began over 20 years ago. The idea for the film and the original screenplay came from Caroline Bongrand.”

What did you do?

I have any and all documentation regarding Gustave Eiffel sent to me from Paris. That’s how I discover that he was head over heels in love with a woman named Adrienne Bourgès as a young man. That Adrienne came from a big bourgeois family in Bordeaux who felt that Gustave was not deserving of their daughter and forced the couple to separate. Eiffel was both very saddened and hurt by this. I also learn that the engineer was not in the least interested in taking part in the Exposition Universelle of 1889 until he suddenly and inexplicably changed his mind and took on the Tower project. I was stunned to learn that what I thought I was making up turned out to be true.

I had the backbone of my story – a wonderful love story with the construction of one of the most famous monuments in the world as a backdrop.  I get to work, constantly communicating with my two professors at USC, Leon and Mimi Roth, the parents of screenwriter Eric Roth.

You then go to pitch the project along with your producer to different studios. What are their reactions?

They find the project too Franco-French for such a high budget and refuse to invest.  They ask whether, for casting reasons, Gustave Eiffel could maybe be twenty years younger to make him a dashing young bachelor or attach to him an American acolyte who never existed, which I refuse to do. I want to remain close to the true story. And then, we pitch it a fifth time when a well-known director who has just met with massive success tells me that he loves the story and would like to direct EIFFEL as his next film. He has already organized a meeting with Paramount. It’s a dream come true. Unfortunately, the director in question ends up by stepping away from the project for personal reasons.

Everything comes crashing down around me. We give up on the project, my visa expires, and I come back to France after three years in LA.

How does the project then come back to life on this side of the Atlantic?

I had taken notes on this whole adventure and I publish a book about it entitled PITCH that sells very well. I’m invited on several talk-shows to present the book and as I am leaving one of them, I receive a phone call from Bertrand de Labbey who tells me that Gérard Depardieu and Isabelle Adjani want to do the film. Adjani has even talked about it to Luc Besson who is interested in directing it. Over the course of a single morning, this project that I thought completely dead was rising up like a phoenix from the flames. Unfortunately, despite much initial enthusiasm, the film does not get made.

And yet it almost immediately bounces back…

I get a call from Christian Fechner who asks me to adapt the screenplay into French. I am delighted but do not think I am up to doing this by myself. I therefore ask my husband, Martin Brossollet to work on it with me. Martin added some wonderful scenes to the script, among which all of the technical scenes with Eiffel’s team around the actual construction of the Tower. He has a passion for engineering and succeeded in rendering this entire aspect of the story very concrete. Thanks to him, the story works better than it did before. Christian Fechner is very enthusiastic and pays us the greatest of compliments when he says: “I really believed Eiffel wasn’t going to succeed”. However, soon afterwards, Christian was diagnosed with a serious illness and explains that he does not have the energy to take on such an ambitious project. Martin and I are very saddened by this news.

And then destiny will lend yet another helping hand to EIFFEL…

Yes, Martin leaves the script behind somewhere and it falls into the hands of Christophe Barratier who reads it out of curiosity. A short time later, we get a call from Jacques Perrin, Christophe’s uncle. He would like for us to sign on with his production company. I like the idea. To me, EIFFEL is like a musical, like a movement in a symphony. And the director of THE CHORUS, who is originally a musician, would know how to handle this nicely.  But time goes by and we receive no further news. And when the adaptation rights lapse, they do not offer to renew them.

At that point, another producer, Manuel Munz, attempts to get EIFFEL off the ground…

Having become chief editor of « l’Officiel » magazine, I come across Manuel at an AIDS benefit. I know him a bit, as we first met when I was fifteen and he was working at my father’s consulting firm. He takes me to lunch. EIFFEL becomes a part of the conversation.  I can tell that he is interested. He asks me to start working on another project, the adaptation of a book by Howard Fast, MAX, a wonderful story.  He then tells me he is going to try to producer EIFFEL with Olivier Dahan as director. I sign on with him. Pathé calls me the next day announcing that Jérôme Seydoux is also interested in the project. I tell them the project is no longer available. Olivier Dahan says he doesn’t want to change anything about the script except heighten the sensuality in some of the love scenes. I agree to this. But yet again, EIFFEL is too complicated to finance. Until 2017, Manuel Munz will try everything, even working with a US co-producers Paula Weinstein (Analyze This), but they just can’t make it work. The financing never comes together and Olivier Dahan turns his attention to GRACE OF MONACO. We are now in 2017 and for me, EIFFEL is really over. A short time later, I get a call from Ridley Scott’s wife, telling me that he has read the script and that he thinks the story is fabulous. He wants to make it his next picture. But they have a strict policy to only take on projects that have not been in the hands of another producer. End of story.

Finally, the film becomes a reality thanks to Vanessa van Zuylen…

She tells me she has read the story and asks me to keep the rights for her. She assures me she will be able to make the film happen. Her passion and conviction fill me with hope once again. I naturally tell her about Pathé’s interest in EIFFEL. The film needs to be made with Pathé. And this is indeed how the film will at last see the light of day. I rewrite the script with Thomas Bidegain. The scenes by Martin Brossollet remain, for the most part, intact.

Looking back, what is your take on this 24-year-long adventure?

I loved working on EIFFEL. It’s a big part of my life. I put myself at the service of something that was much bigger than me. I am happy to have honoured, in my own way, the memory of Gustave Eiffel whose reputation was unjustly tainted afterwards. I am also happy to have shown that sheer persistence, that of EIFFEL, can make even the craziest of projects happen. Above all, I interpret this adventure as a lesson in humility and as a message of hope: one must believe in one’s projects. This film is a love story. But it is also, most especially, a declaration of love. To Paris. To cinema. To audacity.