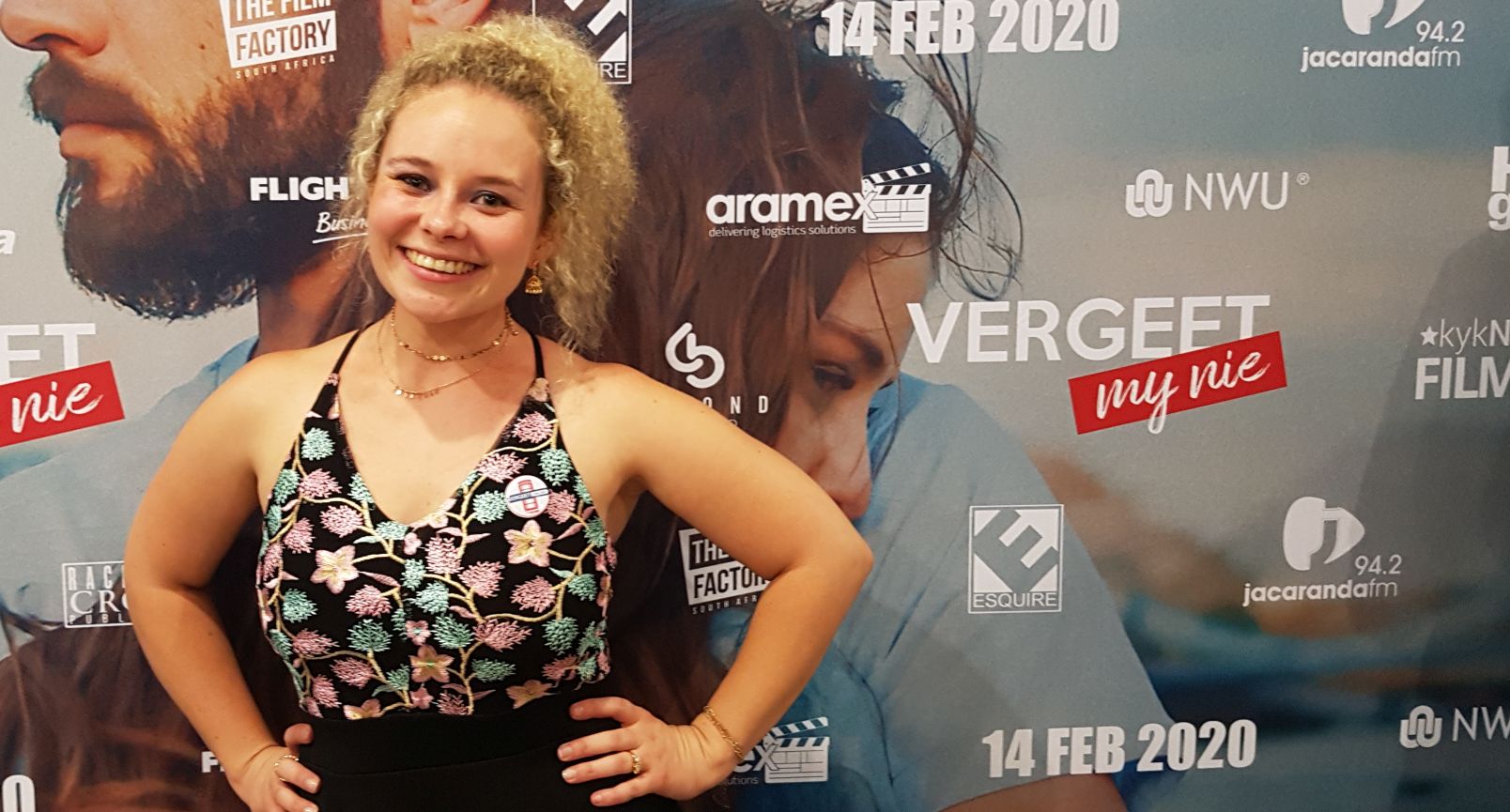 Tarryn-Tanille Prinsloo is a screenwriter with over 6 years of experience in the industry and has written the feature film screenplays for Treurgrond, Trouvoete, Mignon “Mossie” van Wyk, Skorokoro and the horror film Siembamba, which has been re titled to The Lullaby for U.S. distribution in Los Angeles. Her latest screenplay is for the romance Vergeet My Nie, directed by André Velts.

Apart from being a Certified Movement Analyst, one of only three in the country, she graduated with a Doctorate Degree in Drama and Film studies in 2018 at the University of Pretoria. She also lectures part-time in screenwriting, digital media and performance studies at various institutions.

Vergeet My Nie is based on the true life story of Mardaleen Coetzer and Hugo Derks who found that love unites despite the difference that separate. What inspired you to write the screenplay?

It was initially Mardaleen’s short story on how she and Hugo met and fell in life which won the Huisgenoot competition that served as inspiration, but their love story is so unique it provided ample content to play around with and create something special.

Was it a difficult to adapt this amazing real-life story?

As a writer you always have a responsibility to be true to a narrative and its characters, but when these characters are based on real people with a family and life outside of the film, that responsibility is even greater.

It took considerable thought, planning and rewriting to ensure that the essence of their story remained intact. One can always introduce new characters, merge others and throw in some additional curve balls, but the original narrative should form the backbone.

As with most true stories transformed for the big screen, more twists and turns need to be woven into the storyline. Although the film is thematically very much related to Mardaleen and Hugo’s story, it can also be seen as a film that functions in its own right.

Those familiar with Mardaleen and Hugo’s story will notice a fine line of similarities, while others will feel as if they have known the couple for years. A lot of adjustments had to be made for logistical reasons, but the original love story forms the foundation around which the film was developed.

Were Mardaleen Coetzer and Hugo Derk involved during the writing process?

During the initial writing stages I would correspond with Mardaleen and she’d provide me with information regarding certain details. It was important that the screenplay included nuggets from their history and the 90s to give it authenticity.

Vergeet My Nie shows how important it is to follow your destiny, but also follow your heart? Your views on this.

The path between destiny and following your heart is a slippery slope. I believe we’ve all been where Mardaleen often finds herself, but perhaps there is something to be learnt from the fact that it doesn’t always have to be the one or the other. I also think it becomes increasingly complicated when our “destiny” serves as a safety net to protect our hearts. Vergeet My Nie manages to explore both sides of this thematic coin.

What do you think makes falling in love so complicated?

Because people are complicated. Love, especially true love can be terrifying – you open yourself up to someone and trust them with all your baggage, preconceived ideas and fears, whilst they do the same and somehow you have to figure it out together. Throw in some challenges that life so kindly dishes out and you’re in for one complicated, messy trip. But “complicated” is merely a descriptor of love, it doesn’t define love and shouldn’t be a deterrent, at least from my perspective.

Why do you think romance is so popular with South African audiences?

I think that romance truly resonates with South African audiences. We are a country that fundamentally exudes love, kindness and generosity despite our differences and conflict. We also seem to have a soft spot for happy endings, bringing people together and seeing love triumph. I suppose watching a film that explores romance gives us a sense of belonging and hope. It unifies us through a shared experience.

What do you think makes Vergeet My Nie such a unique romance?

It’s a love that travels, and the audience gets to travel with. At the root it’s two people who should be together but their timing is off, plus they keep getting in their own way. How frustrating is that!?

The screenplay really also tries to avoid clichés by creating moments that is authentic to the characters within their specific world.

The film is set in the 90s, which is a very specific time period in South Africa; thus there are many nods to key social-political events woven into the screenplay. London in the 90s also means something special to South Africans especially to everyone who followed the two year working visa route.

Did you write the screenplay with any of the actors in mind?

No, that often complicates the writing process unnecessarily. It’s better for me to write characters and have an actor step in the character’s shoes as opposed to having actors and then creating character shoes to fit their feet.

Music plays an important role in the film, underlining the emotional journey, did you have anything to do with the choice of music?

Ah, there were so many great hits in the 90s and at times the music contributed greatly to the tone of the scene. Lalie and Lisa se Klavier by Koos Kombuis, Bubblegum on my Boots by the Springbok Nude Girls and Mandoza’s Nkalakatha were songs that were synonymous with that time period and so they were scripted. The film’s soundtrack really draws you in!

How difficult is it to get your screenplay produced in South Africa? What are the obstacles and how do think it can be overcome?

I am convinced that it is difficult to have a screenplay produced regardless of where you are in the world. South Africa does however have it’s unique challenges which are primarily funding related. The market is very specific, so one would need to understand the niche you are writing for. It’s also becoming more crucial than ever to tell relevant stories, stories that resonate with our country and people, thereby showing an awareness of positionality, but it’s not always that simple to write them.

How much has the local industry changed since you started working in the industry?

The South African film industry has come a long way.  These days the quality of productions are so high they can often hold their own next to international content, but we still have a way to go. Viewing platforms are changing from cinema to primarily streaming from home, writers and executives have become more daring with themes and story lines, moving away from predictable character’s, themes, formula’s and plots, and venturing into narratives that are bold, honest and push the envelope.

Have you always wanted to be a screenwriter?  Where did it start for you?

It was in high school after the umpteenth creative writing essay that I discovered I might have a knack for this, but I only really started pursuing a writing career after I completed my Honors Degree in 2013 as screenwriting was one of my core subjects.

What motivates you as a screenwriter?

I love telling stories and creating worlds. I also enjoy considering the lengths that a character would go to in order to achieve her goal. People are so interesting and so are their stories. The big motivation however is the payoff – when you get to sit in the cinema and see your words brought to life, hear the audience chuckle at a line of dialogue or wipe a tear during a touching scene. I love that words can create something that stirs people . Deadlines are also good motivational tools…

Tell me about your writing process as screenwriter?

It’s really an ABC approach – apply butt to chair. I’d love to say I have a writing room with scented candles and when I enter I meet the muse after which I just start writing. I might be a romantic but my writing process isn’t. I often sit and stare for hours, trying to figure out where to start, how to carry on, what happens next. But there is a moment when it all clicks and I then I can finally start writing. But it’s a give and take process, a lot of rewriting and questioning underlined with bursts of uncertainty. When I get feedback, I work through it diligently and start the process again… until we lock.

There are many opportunities for writers in our country, and the future looks good at the moment. Things can change, but a writer needs to be able to adapt, that’s the only to make it. Adapt to different styles, formats, content… when times change you need to keep up to speed.

What do you think producers look for in screenplays?

This is really a tough question… I think they are looking for content that stands out from the rest. Something with legs that can keep going. Producers almost always have a lot at stake so they are looking for screenplays that will make it worth their while. Something different. You’re lucky if you can crack the code, but the code also keeps changing.

Any tips for aspirant screenwriters who would like to get their work produced?

What do you hope audiences will get from watching Vergeet My Nie?

My hope is that when the film ends, people will sit for a moment and observe everything around them, remembering that life is precious and that true love is scarce, but worth it too. I also hope people will recognise a part of themselves in the characters and remember something about the nostalgia of the 90s. Those who were part of the “London rush” generation at that time will also hopefully enjoy the blast from the past moments.

Valentine’s day usually fills people with dread, but do yourself a favour and go watch this special film, I guarantee that you’ll walk out feeling moved.