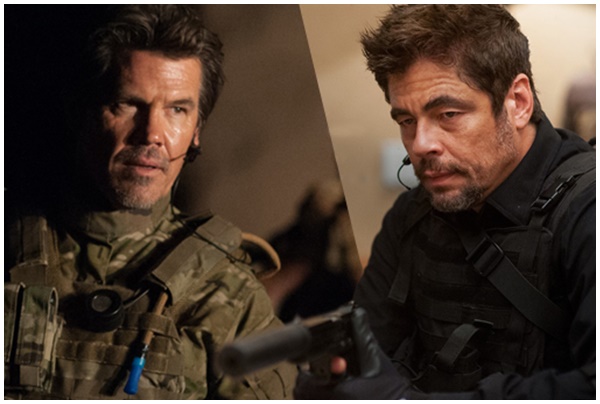 The tense, sometimes fraught relationship between Alejandro and Matt is at the heart of the Sicario saga.  “You love the honesty and realism and how these characters are portrayed,” says director Stefano Sollima. “You can love them, but they are not always heroic. They kill people. They are brutal, they are tough. They are human. So by showing their humanity and their souls, it makes them sympathetic characters.”

In Sicario: Day of the Soldado, the series begins a new chapter.  In the drug war, there are no rules – and when the US government begins to suspect that cartels have started trafficking terrorists across the US border, federal agent Matt Graver (Josh Brolin) calls on the mysterious Alejandro (Benicio Del Toro), whose family was murdered by a cartel kingpin, to escalate the war in nefarious ways. Alejandro kidnaps the kingpin’s daughter to inflame the conflict – but when the girl is seen as collateral damage, her fate will come between the two men as they question everything they are fighting for.

The film reteams Academy Award winner Benicio Del Toro, as the mysterious attorney-turned-assassin Alejandro, with CIA operative Matt Graver, portrayed once again by Josh Brolin, to fight the cartels.  Alejandro is tasked with kidnapping a drug kingpin’s daughter to exacerbate an already volatile situation, a mission which ends up having very personal stakes for him.

“Alejandro’s able to relive in some ways what happened to his own daughter,” says Del Toro, “so that starts to change something in him.”

Del Toro studied the Day of the Soldado script carefully, and would continue to scrutinize it every night during filming.

Says Sheridan, “It’s as though the souls of every victim of drug violence came together and formed one man whose mission is to seek vengeance and justice for them. It was really the idea behind Alejandro that that much sadness and pain conformed into a palpable rage that’s then turned outward.”

The fate of the young girl, Isabela, hangs in the balance, forcing Alejandro and Matt to go toe-to-toe, each facing a moral dilemma in the middle of the drug war they are escalating.  Ultimately, they must choose between her life or winning the war.

“They stage this war, underestimating the possible consequences,” says director Stefano Sollima.  Born and raised in Italy, Sollima has built his body of film and television work around often fine line that exists between cops and criminals with such projects as popular television series “Gomorrah” and “Romanzo Criminale (Crime Novel)”, as well as award-winning features A.C.A.B.: All Cops Are Bastards and Suburra.

For Denis Villeneuve, the acclaimed director of the first film, Sollima was an inspired choice who delivered “a knockout.  Sollima did a masterful follow up to Sicario. I was blown away!

In the sequel, the characters face choices far beyond any they’ve faced before.  “Alejandro makes a decision based on conscience and ends up disobeying his orders and, in a way, he declares war with his partner,” says Del Toro. “By doing this, Alejandro and Isabela are on their own.”

At the start of the film, Matt Graver has returned from working in the Middle East and is given a new assignment from his CIA bosses, drawing him back into the border world. “In short, he needs to create chaos in order to ultimately have justice. And control,” Brolin says.

“Matt is a believer that the end justifies the means, and morality is only relevant as it relates to your side, and it’s a zero-sum game for him,” says screenwriter Taylor Sheridan.

“They face a series of consequences that lead them to question their own integrity and where they fit into the larger political agenda,” says Brolin.

The script was once again written by Academy Award nominee, Taylor Sheridan. The producers were thrilled to have Sheridan on board to craft another engaging Sicario story.

Says producer Molly Smith, “These were such iconic characters, and Taylor had a great idea to take them on the next chapter of their journey.”

“Taylor’s got the modern western voice that people are craving,” says producer Trent Luckinbill of Black Label Media. “We asked, ‘What would you like to see these guys do and what story would you like to tell?’”

Most recently, Sheridan made his debut as a writer/director with his critically acclaimed film Wind River, the conclusion to his modern frontier trilogy, which was released in August 2017.

Other credits include Sicario, directed by Denis Villeneuve and starring Benicio Del Toro, Emily Blunt and Josh Brolin, which was released in 2015 to critical and box office acclaim. The film was also nominated for several awards including Best Theatrical Motion Picture by the PGA and Best Original Screenplay by the WGA. Furthermore, Sheridan is currently adapting Disorder, based on the French film, for Escape Artists and Sony Pictures.

Sheridan explains how this idea reflects our current world and the volatile nature of the drug trade. “There’s a changing landscape in America as far as the legalization of certain drugs, and an infusion of prescription drugs becoming recreational drugs of choice, that has left the cartels looking for a new product to sell,” Sheridan says. “And I look at what that product is.”

That product, now, is human lives: the trafficking of people across the border.  “This is where the war on drugs has gone, and it’s dark and heartbreaking, but powerful,” says producer Molly Smith. “It’s very real.”

The topic of human trafficking resonated with director Stefano Sollima beyond just the US/Mexico border. “I think this is a topic that’s actually real all over the world. Not just here in the US. It’s the same in Europe. It’s how people are trying to escape from really poor places, and the dream to be in another place where they hope to have a better life. Yet unfortunately, this is rarely the case,” he says.

Born and raised in Rome, Italian director Stefano Sollima has built an impressive body of work in film and TV around the complex dynamics between law and order and the criminal underworld. He is best known as the showrunner, executive producer and director of the highly acclaimed Italian crime drama series “Gomorrah”, based on the Roberto Saviano book.

On the film side, Sollima’s feature debut, A.C.A.B.: All Cops Are Bastards earned six nominations, including Best New Director, at Italy’s 2012 David Di Donatello Awards. The movie, about the lives and work of riot control policemen, was produced by Cattleya and Rai Cinema. In 2015, he helmed mafia thriller Suburra, based on the eponymous novel by Carlo Bonini and Giancarlo De Cataldo.

After the critical acclaim he received for his Italian TV series “Gomorrah,” about the internal power struggles in a crime syndicate, and for the Italian crime thriller Suburra, which connected Italian politics and organized crime, Sollima was eager for his American feature debut.  “I tend to gravitate towards the concept of the anti-hero, and how the motivation behind a character doing something seemingly bad is never simple,” says Sollima.  “There is often a very fine line between criminality and law enforcement. This is a theme I’ve explored a lot in my past work with projects like ‘Gomorrah’ and ‘Suburra.’  I thought Taylor Sheridan and Denis Villeneuve created such a fascinating example of this in the first film, and I was very excited by the opportunity to revisit those themes here in a deeper way. Taylor’s strong characters gave me an opportunity to create a piece of entertainment that also deals with my fascination with the grey areas of law and order in a really intelligent way,”

Says producer Edward L. McDonnell, “Stefano was incredibly respectful of the first film and wanted to keep that dynamic going, with the ability to put his own stamp on the movie. He’s definitely his own director; he’s not copying anybody else. He came to the room and he understood who Matt and Alejandro were right away, and what the dynamics were between them.”

Screenwriter Sheridan was likewise impressed. “It’s very realistic and it’s very unsentimental,” he says. “We don’t want to glorify the violence and we don’t want to trivialize what people are going through. And so you need a filmmaker who’s unflinching, who’s not afraid to show some of these shocking things that take place, and yet is not going to enhance them for the sake of the story.”

Stylistically, Sollima assessed the style of the Sicario saga as being quite close to his own filmmaking style: “This project gave me a chance to use action and, in particular, physical effects, rather than visual effects, to put the actors in the moment and help dramatize the tough issues in the story. It’s one of my favorite ways to work.”

Josh Brolin says, “Sicario: Day of the Soldado takes very real scenarios and real possibilities, and even a real current event, and turning it into a condensed story that I think is beautiful, tragic, and has incredible scope. And it’s respectful – respectful of the emotions that people go through.”