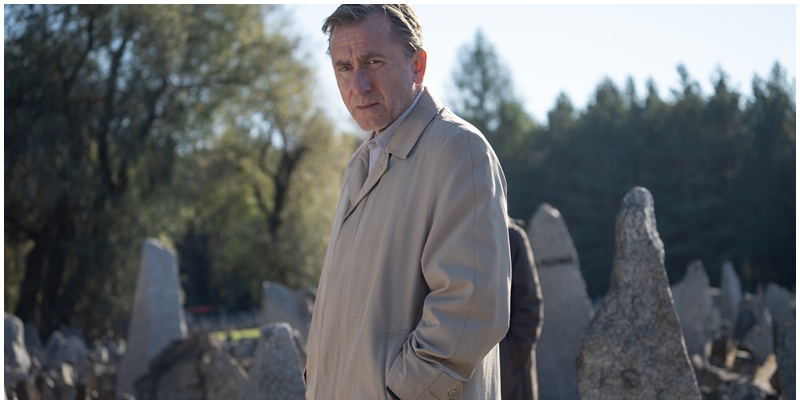 The idea for the hauntingly captivating and exquisite Song Of Names surfaced when novelist Norman Lebrecht, a British commentator on classical music, was about to fly from Liverpool to Los Angeles as the first Gulf War was ending in 1991.

“There was a war on another continent, and it gave me an overwhelming sense of fragility,” he says. “I had an idea about lives being unsettled by larger historic events. And the particular idea I had was: What if a man is so close to another person that they have an almost symbiotic connection—and that person suddenly disappears? How do you continue your life with only half a functioning self? You can lose a part of yourself and spend your whole life looking for it.”

As he continued to think about this idea over the coming years, it developed into his first novel, The Song of Names. The two halves of one soul that Lebrecht created in the novel were Martin, son of a modest music publisher, Gilbert Simmonds, and a Polish Jewish violin prodigy, Dovidl Rapoport, that Martin’s father invites to live in their home.

“The day before Dovidl came along, if you asked Martin what he was, he would have said ‘ordinary,’” says Lebrecht. “When Dovidl arrives, Martin’s ordinariness ceases. When Dovidl disappears, Martin suffers two losses: the loss of his father, which he blames on Dovidl, and the loss of whatever lit Martin up from the inside and made him feel not ordinary. All this lives within Martin as slow-burning anger, the hope against hope that something will be resolved and that when it’s resolved, there will be rage.”

For Lebrecht, The Song of Names is about coping with loss. “It’s something that happens to all of us in our lives,” he says. “Do we then allow loss to paralyze us? Do we allow loss to leave us living half lives or half-hearted lives? Or are we able to, in some way or another, adjust to loss, and find a way to overcome that thing, however terrible it is?”

“Some few stories help us comprehend the enormity of the losses, the astonishing resilience and the creative passion that marked a people’s darkest time. Song of Names is such a story, tracing a haunting melody that carries us far beyond words to a soul stirring climax,” says Rabbi David Wolpe, the Max Webb Senior Rabbi of Sinai Temple in Los Angeles.

“In an age of forgetfulness and coarse cruelty, when the slogans of hate reappear throughout the globe, The Song of Names is a gripping and vital contribution: a reminder of all that was lost, all that remained, and all that remains to be done. A film of a broken friendship that devastates then uplifts, and finally, gives us back our faith.”

As The Song Of Names is set within the world of music and musicians, producer Robert Lantos saw François Girard (The Red Violin, Thirty Two Short Films About Glenn Gould) as an ideal director, who directed the film from a screenplay by British screenwriter Jeffrey Caine, who was nominated for the Academy Award for Best Adapted Screenplay in 2005 for The Constant Gardener.

“This film lives or dies on the emotional impact of its music,” says Lantos. “I thought it wouldn’t be enough to have a terrific film director who just left the music to the composer. It had to be someone who is as familiar with the language of classical music as he is with the language of cinema, so he could work with a composer from a place of knowledge and conviction. And that led me to François. He directs opera, theatre, and Cirque du Soleil shows. I doubt there are many other filmmakers in the world who are as comfortable and familiar with classical music as he is.”

Despite his passion for music, Girard didn’t want the film’s emphasis to be on music and the artistic temperament, as he felt it had been in Lebrecht’s novel: “Music is a very important vehicle in tackling this story, but to me this is not a film about music,” he says.

“This is an intimate story of two brothers, in which the undercurrents of the Holocaust and the memory of those that disappeared, gradually emerges. I made sure at all times that the music was always serving that, and never the reverse.”

The core of the film’s story is the titular “Song of Names,” a recitation of the names of all who perished at Treblinka, set to music.

It is through this song, chanted in a London synagogue by an Orthodox Rebbe (Daniel Mutlu), that Dovidl finally hears what befell his family at Treblinka.  It’s significant that the names are not simply recited, but are sung like a prayer. “Music is a language, and it is probably the most powerful of all languages because it goes across borders with no need for translations,” says Girard.

“It talks to the heart with no intermediaries, and it says things that words can’t say, because it’s a place where we meet and that no other medium can provide.” Soon after learning the fate of his family through “The Song of Names,” Dovidl, who had once renounced his religion, goes to the opposite extreme and dedicates his life to Orthodox Judaism. He also pledges to write a violin version of “The Song of Names.”

“The Song of Names” and the violin theme heard in the movie is an original work by composer Howard Shore (The Lord of the Rings trilogy) based on traditional modes. Drawing on his own experience from growing up in the synagogue, Shore spent two years studying the cantorial tradition using early recorded audio but particularly recordings from the 1950s, when the song is first heard in the film.

“Howard was a contributor to the script, because there are a lot of ideas that I developed and discussed with him, which were ultimately implemented into the script,” says Girard.

Although The Song Of Names is profoundly connected to the memory of those who perished during the Holocaust, there is actually very little direct portrayal of those events. “One reason I agreed to direct this film is that it deals with the Holocaust without looking at it straight in the eye,” says Girard.

“I don’t think I could have done that. Watching The Song Of Names is like taking a walk on a volcano that is apparently quiet with its gardens and paths, but deep under there’s red lava that’s burning. We’re looking at the Holocaust from the small end of the telescope, at characters who suffered the consequences of it, and through their eyes and through their lives, we evoke the tragedy.”

The story of The Song Of Names illustrates how the brutal forces of war and genocide can leave indelible marks on those who manage to survive those scourges. Still, while the story passes through unimaginable darkness, it doesn’t end on a note of utter hopelessness.

“There is a message in this story, that the things we lose, we don’t always lose,” says Lebrecht. “Things that we think are lost forever are deeply embedded inside us, and if we have the tenacity to go and look for them, we can start to understand loss as not total. We are able to build on what is left behind and move on.”