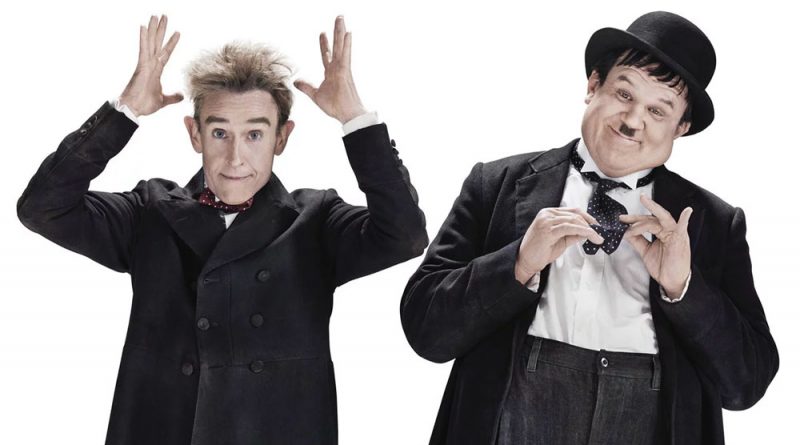 Weaned on Saturday morning BBC TV screenings of Laurel & Hardy legendary two-reelers, award-winning Film and Television writer Jeff Pope was gifted a Laurel and Hardy DVD box-set fifteen years ago, and after watching Way Out West,  inspiration led to research the story behind the icons and snowballed into the screenplay for Stan & Ollie.

“You just have this wonderful picture of these two guys that had been such giants staying at little guest houses, playing tiny theatres and not realizing they did it because they loved each other,” says Pope, who also serves as producer on the film. “This is the thing that inspired me to write the whole film. It’s a love story between two men.

Producer Faye Ward agrees with Pope, saying “Stan & Ollie is essentially about two best friends. And what that means to be two best friends at the end of your life, without them being aware about the end of their life. But it’s also about these two creative forces and how that magic arrives”

In Stan & Ollie, Steve Coogan plays Stan Laurel, with John C. Reilly as Oliver Hardy, teaming up as one of the world’s great comedy teams, who set out on a variety hall tour of Britain in 1953. Diminished by age and with their golden era as the kings of Hollywood comedy now behind them, they face an uncertain future. As the charm and beauty of their performances shines through, they re-connect with their adoring fans.
The tour becomes a hit, but Stan & Ollie can’t quite shake the specter of Laurel and Hardy’s past; the long-buried ghosts, coupled with Oliver’s failing health, start to threaten their precious partnership. A portrait of the most tender and poignant of creative marriages, they are aware that they may be approaching their swan song, trying to rediscover just how much they mean to each other.

Steve Coogan who plays Laurel and worked with Pope on the Academy Award- nominated screenplay for Philomena, immediately responded to Pope’s approach of analyzing their 35year relationship through the prism of the tour. “It is very smart of Jeff to do that because the mistake is often to try and do a biography where you tell the chronological story of someone’s life,” he says. “It’s better to shine a light on a specific aspect of their lives and you can learn everything from that. You can see humanity in a moment.

Stan Laurel and Oliver Hardy are widely regarded as the greatest comedy partnership in movie history.

Between 1927 and 1950, they made over 107 film appearances (32 silent short films, 40 sound shorts, 23 features, 12 cameos), defining the notion of the double act with infectious chemistry and hilarious routines that seemed effortless but were honed down to the finest detail. The pair were part of the very few silent stars to survive and thrive in the sound era, adding wordplay to their comedy mastery, “You can lead a horse to water, but a pencil must be led,” quips Stan in BRATS.

Their influence goes way beyond cold stats and film buff analysis having amassed a huge and devoted international fan base, three museums and an appreciation society, Sons Of The Desert. Beloved the world over – in Germany, they are Dick Und Doof, in Poland Flip I Flap, in Brazil O Gordo e o Magro – they are a gateway to comedy, a passport to a world of sublime silliness and everlasting friendship. Whether you know them from TV reruns, cartoon adaptations or a Twitter gif, just to hear their theme tune, The Cuckoo Song, is not only a guaranteed smile, it’s a time machine to a more innocent age. People admire Chaplin, sit in awe of Buster Keaton but they love Laurel and Hardy. There is a hardly a comedian alive who hasn’t been influenced by Laurel and Hardy, their reach is long.

The filmmakers decided to call the film Stan & Ollie, not Laurel & Hardy as the production was dedicated to exploring the men behind the legends, Pope’s script revealing truths behind their cinematic personas.

Whereas Hardy would often take control on-screen, Laurel was the creative brains who oversaw every aspect of production; once shooting had finished, Hardy would often go off and play golf. The film also suggests that, while in the movies the pair were inseparable, off-screen they were friendly but just work colleagues. As Pope puts it, ‘They were never really close until they took these arduous tours and they lived in each other’s pockets week in, week out. The premise of the film is how they became as close in their real lives as they were in their fictional lives.”

The premise of the film is how they became as close in their real lives as they were in their fictional lives.

Producer Faye Ward explains “I think it was really important this idea of getting back to the homage and essence of Laurel and Hardy and the reason why we didn’t want to do a conventional biopic. We wanted to create something that new and old audiences could enjoy. Laurel and Hardy have huge fans around the world, as well as huge comic fans like Ricky Gervais and Paul Merton, John C Reilly and Steve Coogan there are millions of others, thousands of people talking about how inspired they still are by them. I think there’s an immediate ease even if you’re new to them you can feel the inspiration of what that comedy duo did for the comedy we still see today”

Pope’s script is peppered with telling, touching details about the central relationship — Laurel kept writing sketches for the pair seven years after they had retired — yet Coogan was constantly aware Stan & Ollie needed other colors. “I knew the film was going to be poignant and sad and emotional, my fear was: would it be funny enough?” he says. “You have to earn the right to have the poignancy by charming people. You can charm an audience with comedy.”

While much of the comedy comes from meticulous recreations of Laurel and Hardy’s stage acts, Pope’s script also sews in some of their most famous routines into the fabric of their lives. So, their attempts to get the trunk up the stairs in a railway station closely mirrors the memorable pianostairs sequence of Oscar- winning The Music Box.

“As the script evolved, I realized there were certain points I could tip my hat to their glorious past,” says Pope.

But for Coogan, stitching their skits into everyday situations also says something about the nature of comedians.

“As with many comics, there is not a total distinction between a comedy character an actor plays and who they are in reality, especially if they are heavily involved in the creative process,” he observes. “There is an overlap and we try to let the audience see that, really if you are a Laurel and Hardy fan, then I think we honor the memory of them for those people for whom it’s important that we don’t generalize and that we are specific, and that we’re faithful to who they were. And for those who aren’t, it’s entertaining because when we re-create some of their iconic moments I think we do it in such a way that it’s funny and it still makes people laugh now”

Jeff Pope sent the script to Jon S. Baird, who was directing Danny Boyle’s TV series Babylon. Baird, who remembers watching Laurel and Hardy growing up in Scotland had a background in recreating the comedy legends. “I’ve still got pictures of me and a pal dressed up as Laurel and Hardy in a school fancy dress show,” he laughs. “I was Stan, he was Ollie. He had a lot of padding, the first remnants of a fat suit.”

The film’s journey to the big screen really stepped up when Fable Pictures’ producer Faye Ward (Suffragette) joined the team. Ward had met Baird on film industry initiative Inside Pictures and she immediately recognized the story had a chance to appeal beyond a film buff fan base.

“Even if the film wasn’t about Laurel and Hardy, it’s about two best friends who have lived through something together,” says Ward. “They lived through wives, work, bankruptcy, highs and lows. They are reaching a point where they are realizing they are old and might be towards the end of their lives. Watching that reflection would be fascinating even if they weren’t Laurel and Hardy. It was incredibly clear to me when I first read Jeff’s script and heard Jon’s vision I could see the potential of how special the movie could be”

With family near Stan Laurel’s hometown of Ulverston, Ward spent many summer holidays at the Laurel and Hardy museum. A big fan, she brought a passionate zeal to ensure Stan & Ollie didn’t fall into the spoon-feeding clichés of true life stories.

The director had a clear take on the compelling dramatic question raised by Ollie’s decision to make a film, Zenophobia, without Stan.

“It’s about a marriage between these two people who love each other but someone has committed an infidelity in the past,” he says. “Then the other one has the opportunity to do the same: do they take it?”

Baird’s cinematic dynamism is present from the get-go. The film opens with a six-minute tracking shot that follows Stan and Ollie from their dressing room across a Hollywood studio lot, onto set and into an argument with studio boss Hal Roach.

“I just felt to get that flavor of Hollywood, it seemed like the right device,” notes Baird. “You need to see it unfold all the way through. I thought the script really called out for it. I wanted to challenge myself as well.”
Baird’s bravura asked a lot not only of his crew but also of his actors, who had to deliver reams of dialogue in one go.

“There is a lot of pressure in a shot like that,” admits Coogan. “You almost have to not care about it. If we were on tenterhooks about screwing up, the casualness would be too inauthentic. So, you forget about all the choreography, you just think we are two guys having a conversation. I think that comes with experience, realizing the best thing you can do is just relax and stop giving so much of a shit about everything.”

The shot immediately leads into another pressurized and iconic moment for the actors: Stan and Ollie’s iconic dance to ‘At The Ball, That’s All’ in front of a Saloon backdrop in the classic Way Out West. Coogan and Reilly worked with Director of Movement And Choreography Toby Sedgwick to get the scene down perfectly. The dance makes a number of appearances in the movie as Laurel and Hardy perform it on tour, with the routine getting increasingly creaky. For the onset version, Sedgwick even coached the actors to incorporate the mistakes Laurel and Hardy made during the filming.

“We choreographed that dance so many times we could do it in our sleep” confirms Coogan. “What’s great about watching them dance is that they are just sort of throwing it away and not appearing to try very hard. It requires a lot of work to make something look easy.”

“We had to forge a bond in those moments because it wasn’t just a film,” recalls Reilly. “Because of the theatrical nature of the tour we were filming performances with people out in front of us. It was not only the pressure of making a film but then there’s the pressure of all these people sitting there watching us. We’ve got to deliver for them too. It almost gives you a battlefield loyalty to each other. I’ll always love Steve for what we went through together.”