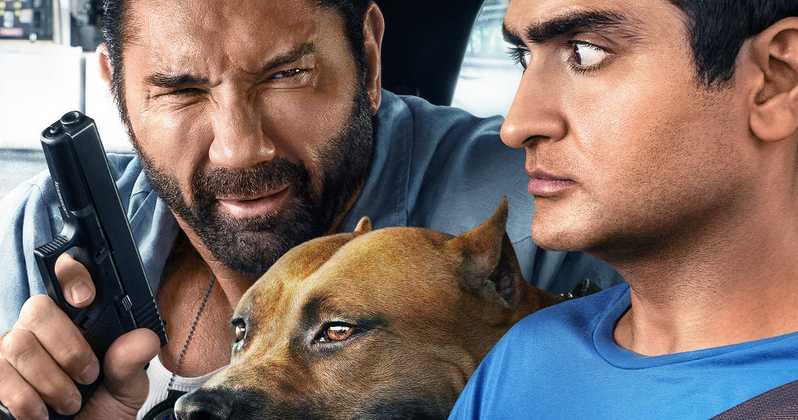 In 2016, screenwriter Tripper Clancy and his manager Jake Wagner came up with the idea of a movie about titled Stuber about an Uber driver named Stu.

“I always knew based on the name that this would be an action comedy, and the day after Jake and I discussed it I basically had the entire movie in my head,” recalls Clancy. “The buddy cop genre is a personal favorite,” he adds.

It wasn’t long after Clancy developed the script that it was acquired by Twentieth Century Fox, with Michael Dowse (What If, Goon) set to direct, Jonathan Goldstein and John Francis Daley (Game Night, Vacation) producing and Nicholas Thomas (Let’s Be Cops, Scare Tactics), Jeremiah Samuels (Sleepless, Secret in Their Eyes) and Jake Wagner (Killing Season, Evidence) attached as executive producers.

Director Dowse recalls, “After I read this script I thought it was the perfect recipe where you could do something that had a lot of heart and a lot of comedy but I thought the action sequences could work really well and all of these pieces could sort of feed into each other to make a pretty unique film.”

He continues, “I think a lot of times action comedies are either very funny and maybe the action is an afterthought or it’s vice-versa and the action is really well done, but the comedy maybe suffers, and I thought we could make a film that fired on both cylinders in that sense, similar to what John and Jonathan were able to accomplish on Game Night.”

It’s like The Odd Couple but with more explosions.

Stu (Kumail Nanjiani) is a chatty, mild-mannered, risk-averse Millennial who works in a sporting goods store while moonlighting as an Uber driver trying to make enough money to finance a spin gym business to get with the girl of his dreams — a plan that’s about as likely to work as it sounds. He will do anything to save his five-star driver’s rating.

Vic Manning (Dave Bautista) is a middle aged, old school, alpha detective. He’s divorced from his wife, married to his job, and neglectful of his parental duties to his grownup artist daughter, Nicole. Years of using his hulking body as a battering ram have taken its toll, but Vic still pushes it to the limit. Allergic to both conversation and technology, Vic is quick to get angry and quick to pull the trigger — a combo that everyone loves in a cop!

One day, leaving his eye doctor’s office after having Lasik surgery, Vic receives a tip on the whereabouts of the drug dealer who murdered his partner, his Great White Whale. Unfortunately, Vic wouldn’t be able to spot a whale if it was right in front of him. Even a white one. Eyes blurry and unable to drive himself, Vic calls for an Uber, and guess who answers. Can these two very different men share a Nissan Leaf while hunting drug dealers across Los Angeles?

“This is not your typical studio action comedy. Michael Dowse is the perfect director for this because he understands the need to not only be funny, but also to develop human characters that you can relate to and in addition to that he’s a super fun guy and that comes across in his movies,” says executive producer Thomas.

Adds Thomas, “He’s also incredibly smart and knows exactly what he needs to create his films because he comes from an editing background so he’s always thinking about the cut when he’s shooting,” says Thomas.

The filmmakers stressed the importance of making the film feel not only funny but also grounded in reality. Or, you know, as grounded as an edge-of-your-seat run-and-gun car chase across Los Angeles can be. It was important that the average moviegoer could relate to the characters.

Thomas explains, “We start with this cop Vic, whose partner has been killed and he’s been seeking vengeance for years.  And it just so happens the day he gets Lasik surgery is when he has an opportunity to catch the bad guy.  So, not getting the official go ahead from his boss, he calls Uber and Stu picks him up and the fun ensues.”

He adds, “There’s nothing like humanizing a superhero by giving him blurred vision from Lasik eye surgery which not only causes him this hilarious disorientation but also shows his age and vulnerability which paired with his size and strength is just amazing.”

Most of the film’s humor stems from the differences between Vic and Stu, two guys who couldn’t be more different. Stu is a sensitive beta-male who relies on his empathy and wit. He cries at movies. And at TV shows. To be honest, he cries at everything. Meanwhile, Vic is a muscle-bound alpha who thinks feelings are for women and children ages three and under. Once you’re four, it’s time to man up. There’s also the generation gap in that Stu is a Millennial who lives on social media while Vic thinks ‘Snapchat’ is when a crackhead tries to bite your nose off during an interrogation.

Production designer Naaman Marshall says, “There’s this generational divide. You have Vic who has no idea how to use Uber, so we get to watch him stumble with the concept of it and he jumps right into the front seat and demands to go to a certain destination. Then you have Stu trying to explain this isn’t how the app works. It’s how I’d imagine it would be like trying to explain Uber to my Dad.

Thomas says, “I think we’ve probably all experienced an Uber driver like Stu. He’s got all types of treats. He’s got gum, mints, little mini waters, all types of different charging devices.  And he is desperately seeking five stars from you. Stu and his five-star ratings is a whole thing.”

Dowse says, “Everybody has been in an Uber and has had a gabby Uber driver, and somebody who sort of rattles on and aims to please and that embodies Stu. Stu is sort of chasing other people’s dreams picking up extra Uber shifts to try and finance the spin gym dream for this girl he pines for.  He’s a hardworking guy.  He’s a very amicable guy, but he hasn’t really found his passion or sort of who he is.”

He adds, “We’re basically taking sort of an everyday character and dropping him into this gritty L.A. underworld. I think there’s a bit of wish fulfillment in terms of what a day in a life like that would be like if suddenly you took your average Uber driver and put him into a crime world and see if he would survive or how he would,” adds Dowse

In addition to presenting a fish out of water situation, the film plays with the topical idea of what it means to be a man in today’s society.

Ultimately, these two wildly different characters develop a heartfelt bro-mance and each becomes the better man in the process as they realize that the other has something surprising to teach them about life.

“Our characters change so much throughout the course of the night where Stu learns to stand up for himself.  He learns to fight.  Vic learns to be a little bit more sensitive to others and to be a guy who sort of listens, and a guy who realizes he can do things himself. And he needs help, and he needs people around him and he needs support like we all do,” adds Dowse.

To play the film’s grizzled cop, the filmmakers knew they needed to find someone who not only embodied the tough guy physique and can take a punch but also someone who could follow the character’s arc and show the vulnerability that Vic ultimately achieves. . In other words, they needed a hard man with a soft side. They found their Vic in Dave Bautista, four-time WWE World Heavyweight Champion and two-time WWE Champion, best known to movie audiences for his role as Drax the Destroyer in Avengers: Infinity War and Guardians of the Galaxy.

“He’s a physical specimen to begin with,” says Dowse. Excited to introduce a different side to Bautista, Dowse explains, “In this film he looks different than he has looked in most of the other films he’s done.  I think he looks a little more surly, a little bit more disheveled.  It’s not the Dave Bautista that maybe audiences are used to and I like that transformative effect on it.”

Says Dowse, “First and foremost, Kumail is a great actor, very thoughtful, very smart but also very hilarious.  He’s also a very talented writer as well, so he brings that all to the table, and is amazing to work with and collaborate with. He brings such tremendous skill to the comedy in this movie – his ability to improvise keeps his co-stars on their toes.”

Nanjiani says, “I had never gotten a chance to do an action movie before. And I love those movies and I thought the script was really interesting, and fun and funny and it was action with a lot of comedy in a very grounded real way, and I’m a big fan of Dave Bautista. So there were a lot of things about it that were exciting and new to me.”

Bautista recalls, “There are a few different things that intrigued me about this project. Initially I thought the premise of the script was just really funny and working with Kumail was a huge attraction for me. I had seen some of his stuff and he’s just hilarious – a real star in the making.”

“What makes this film unique is the odd couple of Dave and Kumail who are pretty great together. They bounce of each other so well. There’s a lot of conflict between their characters but they also find common ground,” says Dowse.

Nanjiani says, “The dynamic really works because it’s two completely different kinds of guys that we all know, sort of forced to spend time together. And these two guys would never, ever, ever be friends – except in the situation where they’re sort of forced to work together, so you have sort of the one guy who’s the new millennial man kind of guy who’s very into talking about his feelings, and is ok with crying, and all that stuff. Whereas Vic, played by Bautista is sort of the traditional, stoic, or angry action hero of the past.”

“There are a lot of layers to this movie, but I think at the end of the day, we’re just going to make people laugh their asses off. It’s just funny,” says Bautista.