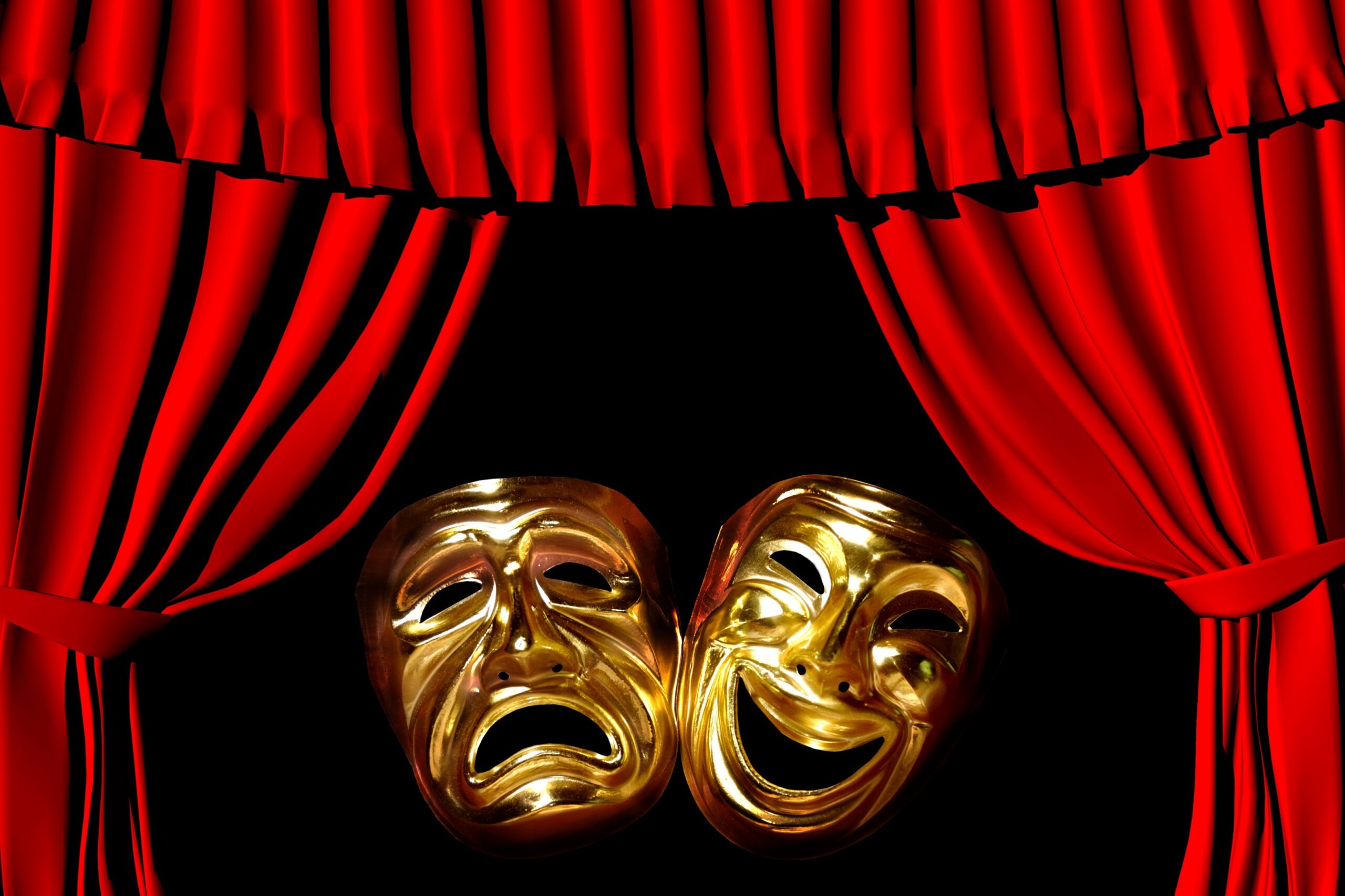 In his book ‘The Life of the Drama’, Eric Bentley said: “The living experience of a play (as in a novel or in a film) is the river of feeling within us which flows, now fast, now slow, now placidly between broad banks, now in a torrent between narrow ones, now down a slope, now over rapids, now cascading in a waterfall, now halted by a dam, now debouching into an ocean.”

But the events of life are not dramatic in themselves. Drama requires the eye of the beholder.

To see drama is to:

This emotional response consists of:

If drama is a thing one sees, there has to be the ONE TO SEE (the dramatist).

Ask yourself: How dramatic is this life of yours?  Now find the conflict in everyday life. If there is no conflict dramatic elements are rare and may be boring. Drama is a combination of what happens and the emotional response of the dramatist.

The question of ‘How dramatic is life?’ is subjective: What one person feels to be boring, other experiences as thrilling. What another experience as exciting, someone else finds it dull.

Imagine how dull and dreary life would be if everyone had to all like the same things.

It is the exploration of the unknown unfamiliar that challenges the intellect and provokes the imagination; exploring the familiar could result in a predictable and well-known experience.

As a dramatist you have to expose audiences to a world they could have never imagined, and show them the different faces of humanity and the human condition.

The life of millions of people is conventionally undramatic until a journalist or dramatist dramatises the issues.

The dramatist relies on people’s insatiable appetite for drama

The Drama of Athol Fugard

This story appeared in the Mail and Guardia in December 2000, with the headline: Mother, 3 Children die in track suicide.

A mother with a child on her back and two toddlers in her arms stood on the tracks in front of an oncoming train – and when the five-year-old tried to scurry away, she pulled him back before the family was pulverized under the train’s wheels…

This inspired Athol Fugard to write The Train Driver, which he dedicated to Pula Lolwana and her three children who dies on the railway tracks between Philippi and Nyanga on the Cape Flats on December 8, 2000.

How did Fugard dramatise the event?

When a train smashes into the despairing figures of a mother and her child, their tragedy is evident to us all. But how much thought do we give to the life of the driver of that train hurtling headlong on its fixed path?

In The Train Driver, Fugard explores this personal human drama from the point of view of the train driver, who tries to exorcise his demons by drawing the gravedigger of ‘the nameless ones’ into his private dilemma.

The Train Driver was staged as part of the opening season of The Fugard Theatre in Cape Town and was directed by Fugard himself with Sean Taylor and Owen Sejake.

The Drama of Tennessee Williams

Tennessee Williams said that “his art sprang from his repressed self-knowledge.”

Williams used his plays and stories as a way of translating himself into an acceptable fiction.

Williams’ process of bringing a play to life was never an evasion of the truth, or an attempt to glamorize his own image.

In his middle years, he was able to stand back from earlier experiences and observe the foundations of his work being laid down in his childhood and adolescence.  Certain elements are clearly visible in both life and art.

The distress and guilt Williams felt at the lobotomy of his sister Rose (which was carried out when he was away at college) feature Suddenly Last Summer where Catherine fights to remain intact in the face of Mrs Venable’s determination to destroy her memories and he mind.

“I saw that it was all over, put away in a box like a doll no longer cared for, the magical intimacy of our childhood together..”

Said Williams: “I began to find life unsatisfactory as an explanation of itself and was forced to adopt the method of the artist of not explaining, but putting the blocks (events) together in some way that seems more significant. Which is rather a fancy way of saying that I started writing.”

Said Williams: “Frankly there must be some limitations in me as a dramatist. I can’t handle people in routine (everyday) situations. I must find characters who correspond to my own tension. A play must concentrate the events of a lifetime in the short span of a three-act play. Of necessity, these events must be more violent (brutal, aggressive)  than in life.”

The Drama of Eugene O’Neil

In 1940 Eugene O’Neil wrote his play Long Day’s Journey into Night (one of his last) to confront a painful and tragic part of his own autobiography. He had long been haunted by this “tale of sorrow”, and he could bring himself to deal with it only in the medium to which he had devoted his full creative powers – the play.

The drama of Long Day’s Journey into Night required far more skill and resolution for its unfolding than is demanded of plays written about other people and their frailties, no matter how involved the writer may be with the myths and themes and motives of their action.

O’Neil turned to the loneliest and most entangled of subjects: an unflinching portrayal, in a time of acute psychological stress, of himself and those closest to him. It is a sombre and moving play and its writing is regarded as an act of magnificent courage.

The picture O’Neil dramatised of his home life exposed mercilessly his family’s weaknesses.

Said O’Neil to his wife, to whom he dedicated the play on their 12th Wedding Anniversary: “Dearest: I give you the original script of this play of old sorrow, written in tears and blood. A sadly inappropriate gift, it would seem, for a day of celebrating happiness. The bit you will understand. I mean it as a tribute to your love and tenderness which gave me the faith in love that enabled me to face my death at last and write this play – write it with deep pity and understanding and forgiveness for all the four haunted Tyrones. These twelve years, Beloved One, have been a Journey into the light – into love.”

“Life being what it is, one seeks revenge,” wrote Paul Gauguin.

The Drama of Joe Orton

The dramatist does not necessarily always use tragedy or melodrama. The comic playwright can use comedy, as did Joe Orton, who wrote Entertaining Mr Sloane, The Good and Faithful Servant, Loot, What the Butler Saw.

“The comedian gets even with laughter: a hostile sharpshooter using his wit to kill the past and defend himself from the present,” wrote John Lahr, a theatre critic, novelist, biographer and editor, who wrote the biography of Joe Orton, Prick Up Your Ears.

Wrote Lahr: “The comic playwright shares the capacity for being at once mischievous, irreverent, truthful, outrageous, infantile, vulgar, and brilliant. Comedy challenges romantic formulations about creativity, making something beautiful and positive out of a variety of murky emotions.”

Said Orton: “I’d like to write plays as good as The Importance of Being Earnest. I admire Wilde’s work but not his life, it was an appalling life. Unlike Wilde, I think you should put your genius into your work, not into your life.”

In life, Orton never made it because his genius did go into his work, and Halliwell, the man who made it all possible, was neglected. Halliwell, who was obsessed with Orton’s mind, the wicked fun it poked at the world, lived and wrote together with Orton for fifteen years. They even wore each other’s clothes. But on August 9, 1967, murder made them equal again when Halliwell killed Orton.

Read more about why playwriting is good for storytellers

Read more about The Beauty Of Incomplete Things