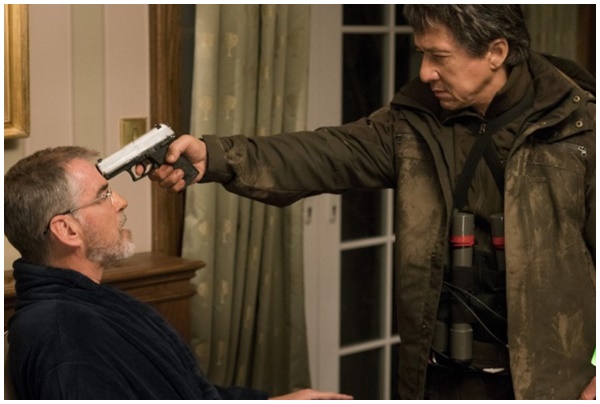 “This film is about settling your demons,.. It’s about justice. It’s about paying a price for what you do..”

Based on acclaimed crime writer Stephen Leather’s 1992 novel, “The Chinaman,” The Foreigner gets a present-day update by screenwriter David Marconi (Enemy of the State, Live Free or Die Hard), and is directed by a master of the smart action genre, Martin Campbell (Casino Royale and Goldeneye.)

In this gripping and relevant action thriller, justice, retribution and redemption are at the heart of a provocative story of two men whose hidden pasts explode in the present.

The film tells the story of humble London restaurant owner Quan (Jackie Chan), whose long-buried past erupts in a revenge-fueled vendetta when the only person left for him to love — his teenage daughter — is taken from him in a senseless act of politically-motivated terrorism.
As he searches for the people responsible, he seeks the assistance of Irish Deputy Minister, Liam Hennessy (Pierce Brosnan), an ill-fitting government official whose own troubled history comes to bear down on him.
As Quan enters into a game of political cat-and-mouse with Hennessy, both men must confront their pasts as they try to identify the elusive killers.

The film marks a blazing return to the screen by Jackie Chan (the Rush Hour trilogy, Skiptrace) and Pierce Brosnan (Tomorrow Never Dies, The November Man), two actors in roles that take full advantage of and build upon their legendary star status.

The story of The Foreigner – its themes and its specific story – is a sometimes disquieting reflection of the fragile world we inhabit. The characters are intriguing examples of the complexities of living in a global society where belief can become action without emphatic consideration of consequence.

From Page To Screen: The Foreigner’s Journey

While acclaimed crime writer Stephen Leather’s 1992 novel, “The Chinaman” was set in the early 90s during “The Troubles” — the period when the IRA were bombing the UK and Northern Ireland — the film’s producers felt that the main themes could be equally powerful in a current setting.

Together they worked with Marconi revising the script.

STXfilms, a division of Robert Simonds’ STX Entertainment, later optioned the script from Godfrey and Sarkissian, with Chan attached to play Quan. STXfilms’ then head of production Cathy Schulman oversaw a new draft of the screenplay, focusing on designing it as a “two hander”.

Both Quan and Deputy Minister Hennessy were battling similar demons based on their shadowy backgrounds. Schulman suggested that Hennessy’s role be fine-tuned to attract Schulman and Campbell’s mutual friend and collaborator Pierce Brosnan.

“While we were working on it, we knew that Jackie Chan would be playing Quan and we had Pierce Brosnan in our sights too,” says screenwriter David Marconi. “So, when I was doing the script, it was with these actors in mind. “

Recently, two other films Marconi wrote have been made into films; The Foreigner, directed by Martin Campbell, based on the book The Chinaman by Stephen Leather, and Darkside of the Moon, based on the novel by Martin Suter, which Marconi originally penned and developed for Oliver Hirschbiegel (Downfall).

A native of Highland Park, Ill., Marconi was passionate about film making from an early age. After winning several high-school filmmaking competitions, Marconi was awarded an Alumni Merit Scholarship to attend the University of Southern California’s Film School. Upon graduation, his first job was as Francis Ford Coppola’s assistant on The Outsiders. Following that, Coppola promoted Marconi to Production Supervisor 2nd Unit on Rumble Fish.

After a year-long series of production jobs ranging from Art Department to Prop Master, Marconi landed his first feature writing assignment off an original pitch entitled; Mud Sweat and Gears. (Warner Bros.) Bob Schaffel producing, Thomas Carter to direct. Marconi followed that by writing two more back-to-back action pictures for Warner Bros; The Blonde Hurricane, a romantic comedy set in Paris during the 30’s, and One Hot Afternoon, an present day version of a classic Western. Though the writing assignments were lucrative, the directing was tugging at him. In 1993, Marconi wrote and directed his first feature, The Harvest.

As a writer, Marconi has also co-authored with Flint Dille three serialized novels: Agent 13, The Midnight Avenger, Agent 13 and the Serpentine Assassins and Agent 13 and the Acolytes of Darkness, all from Random House Publishing.The books are currently under option and being developed at Universal Pictures with Charlize Theron to produce and star.

It was a lengthy process, which included contributions from director Martin Campbell, once he came on board the film. “We worked on the script together for about four or five months,” recalls Marconi. “We had a great working rapport which is essential, and Martin’s ideas were spot on. Martin elevated the script to another level, his notes and suggestions were very clear. He was as concerned about character as am I.”

“This is a story of revenge where the main character is a man who’s had a tragic past. Two of his daughters were killed in terrible circumstances several years ago, and his wife dies soon after they have established a new life of safety in the UK, and now 15 years later, his only daughter is killed, so he has nothing left to live for,” explains Marconi. “His journey of revenge ultimately becomes one of redemption. It took me about 2 1/2 years of writing and rewriting. I had to break the book down. Stephen wrote a very good book that I was able to do an adaptation from.”

One of the biggest challenges was updating it from the 90s to present day.

“It was very important to take the issues of today and put them into this novel that was set in the past. We had to reinvent and update certain things so the technologies and the threats were more contemporary,” says Marconi. “I didn’t want to make the IRA the bad guys, because they’ve made peace. But there are upstarts in the organization who haven’t signed up to peace that are out there still trying to do things. I had to find the different shades of the villains and try and present all sides so the bad guys weren’t all one color and the good guys weren’t all one color. It’s about various shades of greys because the world that we live in is a very grey world. You have to get inside the heads of all the characters, including the villains, so you can understand why people do what they do.”

“I wanted to do a story about a man who was underestimated by people,” says novelist Stephen Leather. “A man who nobody took seriously, who isn’t considered a threat.” All too often, screen adaptations of novels bear little resemblance to the source material, leaving authors disgruntled. Thankfully, that isn’t the case. Although the film has shifted the story to the present day from its early 90s setting, the original themes and foundation remain. “It’s my book and it’s the filmmakers’ movie,” says Leather. “David is a brilliant writer and he’s done such a great job of writing the script. He’s changed a lot of elements. We had to update the technology. And it’s very true to the story and to the characters I wrote. So, I’m very pleased that David’s given it an extra edge. Martin’s action scenes improve it. And he’s put more intensity in it. I think it’s brilliant, absolutely brilliant. And to be on set surrounded by 100 people filming a story that I wrote in my little room 25 years ago is thrilling.”

Chan embraced the opportunity to break out of his typical action-hero persona and tackle a serious dramatic role.

“He is obviously completely and emotionally wrecked by the death of his daughter. And he very quietly goes to the police to ask who did this. He is a quiet man with a simple life; he makes a living from his Chinese restaurant. He is dignified,” says Campbell, discussing Quan’s journey for justice, “He even, at one point, in his naivety offers the police chief all his life savings in order to at least get a clue- a name- about who could have done this atrocity.”

“Quan has a history. He was a Nùng fighter in Vietnam, so he worked with the US soldiers, in training, in guerrilla warfare, so he’s got a real history of how to be a bad-ass,” adds Lumpkin. “He knows how to defend himself; he knows how to protect himself; and he knows how to find the answers. And that’s really his mission: to find answers and to seek justice.”

After being dismissed by Hennessy when he asks him who killed his daughter, Quan realizes he must draw on the skills and training from his secret past to convince Hennessy to take him seriously. “Quan does little things – he puts small bombs in his office and in his car which are not meant to hurt or maim – but Hennessy knows if Quan wants to, he can kill his whole family,” says Chan. “Quan just wants Hennessy to give him the name of the bombers. He’s stubborn and he wants revenge.” As Quan’s frustration increases, so do the demonstrations of his capabilities. As Campbell puts it, “Quan has nothing to lose. And he doesn’t think for a minute he is going to live through this,” states Campbell. “And he doesn’t care. It’s just morally what he has to do.”

Playing Liam Hennessy, the former IRA-commander-turned–British-government-official is Pierce Brosnan. For Lumpkin, Brosnan is a man who “oozes class. He was James Bond, he was Remington Steele, and he’s everything that we have always wanted to be when we watch a movie. Pierce brings a sense of balance, coolness and class to the character of Hennessy. You look at Hennessy at first and you think ‘what a classy cool guy.’ But he’s got a dark past. And there’s really no one else who could play that role like Pierce.” Says Brosnan of his character, “He’s someone who was born of war, really, he grew up in The Troubles in Ireland. He’s very bright, very articulate, and someone who is trying to hold onto his own position in government and within his own people in the north of Ireland.”

Reuniting Martin Campbell with his former Bond was an easy sell. “Well first of all, Pierce is Irish, which helps. I think this one of the best things he’s ever done,” says Campbell. “He threw himself into that role. I remember him saying to me [he] was a little worried about the IRA, being Irish and doing a story like this. However, he went into it with his eyes open. And for once, I got some rehearsal time with him before we started, so that helped. I think the character he finally came up with is absolutely fascinating.”

“Hennessy is as we would expect a politician to be, withholding answers and information,” says Lumpkin. “He sees Quan as simply a foreigner and doesn’t pay him any attention — until Quan shows what he’s capable of. Hennessy realizes this is serious, but he has a lot of other things going on. He’s got to build up his power base, which is beginning to dwindle. He’s got to handle [former IRA colleague] McGrath and his rogue forces. Pierce does a fantastic job of playing Hennessy. He’s got a really solid sense of style in what he brings to the role. Hennessy is completely believable – he’s got a great charm at the beginning, but slowly he reveals how much of a bad-ass he is.”

Amidst all this action and intrigue, when asked what the audience hopes to feel when they leave the theatre, Martin Campbell sums up, “I just want them to enjoy it. I want them to be thoroughly entertained and emotionally moved as well. For me, that’s really the criteria.”