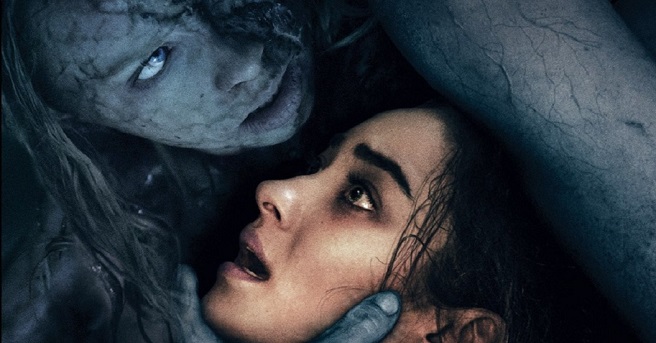 The Possession Of Hannah Grace came to life when Broken Road producers Todd Garner and Sean Robins began casting about for inspiration for a one-of-a-kind premise that could anchor a truly terrifying horror film. “We began to develop ideas and settings that we thought were scary—this particular movie actually came from an article we read about someone who had to do community service in a morgue,” Robins says.

“The idea of a young woman being alone in a morgue, someone who wasn’t used to the bodies, the smells, the isolation, was something that very much intrigued us. Growing up, I had a friend whose father was a mortician, and hearing stories from him, it always seemed like a great place to place a character out of her comfort zone, as we do with Megan here, and expose her to something that is incredibly scary.”

“It’s a story about a woman confronting her own mental health and being stuck in a really harrowing situation of a very lonely, scary, creepy job,” adds producer Todd Garner. “She’s not sure at first if it’s her own mental health or if it’s something more supernatural happening to her. The creepiness of being in a morgue at night, I thought that was a really interesting premise— somebody who’s struggling, who’s trying to get their life back together, stuck in this very odd situation.”

In The Possession Of Hannah Grace a shocking exorcism spirals out of control, claiming the life of a teenage girl. Months later, ex-cop Megan Reed (Shay Mitchell) is attempting to get her life back on track after failing to prevent her partner’s murder and turning to drugs and alcohol to manage her grief. Working the graveyard shift at the morgue in the Boston hospital where she got sober, Megan finds an unlikely peace in the extreme solitude of the cavernous facility.

But one night, after she takes delivery of a horribly disfigured body, things begin to change. Locked alone inside the basement corridors of the morgue with the mutilated cadaver, Megan begins to experience horrifying visions. Questioning her own sanity, she fears that the cadaver is possessed by a ruthless demonic force and is ready to spring back to life—to kill.

Screenwriter Brian Sieve—whose resume includes MTV’s Scream TV series, Boogeyman 2—sparked to the concept immediately. “We talked about some possible worst-case scenarios, and I thought that being trapped in a morgue alone overnight would be a really interesting starting point for a horror movie,” Sieve says. “It’s certainly something I would never want to do, and if the notion was creeping me out, it just might make a good movie. I’ve always gravitated to horror movies that are more psychological in nature where you’re questioning the protagonist’s sanity—and the protagonist is questioning his or her own sanity.”

Sieve embarked on a period of intense research. He watched documentaries about the experiences of Emergency Medical Technicians tasked with delivering bodies to morgues, and he interviewed experts at the Los Angeles County Department of Medical Examiner-Coroner’s office. Keeping the telling, real-world insights he had gleaned firmly in mind, Sieve sat down to write a character-forward psychological thriller, drawing from and updating classic horror themes. Even as he ratcheted up the supernatural scares, he rooted the screenplay in the experiences and perspective of an emotionally damaged but imminently resilient former cop.

“In establishing the tone and the type of horror we wanted to create, I went back to elements that most interested me in movies like The Shining, Rosemary’s Baby, Repulsion, The Fly—you know, horror that lingers,” Robins says. “Yes, you want people to be scared, but a week after they see the film, I want them to still feel, Wow, that touched me, that was weird. A huge source of inspiration for this movie was Alien with Sigourney Weaver as a strong woman trapped in a confined location fighting a malevolent force that’s potentially stronger than she is.”

Screen Gems’ president of physical production Glenn S. Gainor was impressed by the unique trappings of the story and its sharply focused premise. Combining the unsettling themes of possession and exorcism with a tense, atmospheric thriller set inside a confined space housing the bodies of the recently deceased felt wholly original to the Hollywood veteran. The idea taps into some of our most fundamental, most primal fears.

“Setting this movie in a morgue works on a psychological level,” says Executive Producer Gainor. “You take a job in a very sterile environment where you don’t expect a lot of action. But it is a morgue after all, and we are afraid of death and the unknown. We’ve all visited hospital rooms, but I’ve never been in an actual morgue. Few people have. It’s one of those places to which we just aren’t exposed. When somebody dies, we don’t know what happens to the body. And Megan’s in that disturbing, mysterious environment!”

To helm the film, producers Garner and Robins knew they needed a sophisticated filmmaker with a keen understanding of both character and performance and how to craft the truly cinematic scares afforded by Sieve’s screenplay. They turned to Dutch writer-director Diederik van Rooijen, who had a distinguished film and television resume in his own country but had not previously worked in Hollywood.

“We considered as many as fifty different directors, searching for someone who would bring fresh ways to scare you,” Robins says. “Diederik was actually the first person I met with on this film, and I immediately fell in love with the things he said about the script and the way in which he wanted to shoot it. Jump scares are great, and blood, guts and gore are typically part of the vernacular, but because the psychological was much more interesting to us, with Diederik we achieved a great balance of the two. The types of films that he’s attracted to were very much the films that we, Screen Gems and Sony were excited about.”

Although van Rooijen had never made a full-fledged horror film before, he did have a background in crime-thrillers and suspense such as the Dutch-language features Taped (2012) and Daylight (2013)—and he loved the genre.

The Exorcist, Let’s Scare Jessica to Death, The Haunting of Julia—all touchstone films from the 1970s, masterful studies in creeping psychological horror that served as important inspirations for director Diederik van Rooijen.

As a child, he had grown up watching such classics as The Shining, Halloween and Hellraiser. “I’ve seen them all, and far too young,” the filmmaker says with a laugh. “I’ve seen so many of those movies, but I’ve never been allowed to play with the genre. In Europe, you don’t really get a chance to make those kinds of movies. There’s a lot of technique that becomes involved. There are a lot of beautiful dark images you can use.”

To get the assignment, van Rooijen made a five-minute short film that encapsulated his creative approach to the project, using movement, sound design and the claustrophobia of the  setting to amplify the tension inherent in the nail-biting premise. He even shot the short inside a morgue in Amsterdam for an added sense of authenticity.

“The script has this beautiful balance between the supernatural and the macabre and real life,” van Rooijen says. “You can actually imagine walking around a morgue and having to spend the night there. It’s horrifying. And I did it for that teaser. We shot the whole day, and all the drawers were not empty.”

“What I really love about the premise is having somebody stuck down there having to face her own demons—and the real demon,” the director continues. “I wanted to capture that loneliness. Time ticks by very slowly when you’re alone in that kind of situation. You’re always waiting for something to happen. That’s half the ride. Then, of course, you have to scare the hell out of them, which we will.”

Says producer Garner of van Rooijen: “He was very passionate about the material. He’s a very atmospheric director. That sizzle reel really showed the atmosphere and the scares he wanted to create.”

Ultimately, the director is hopeful that the film’s blood-curdling story of exorcism and possession will not only offer audiences the chance to see Mitchell in a new light but also will give them a memorable, visceral moviegoing experience, one that ranks alongside the best in the genre. The Possession Of Hannah Grace, he says, will have viewers leaping out of their seats. “I want them to be scared, I want them to freak out, and I want them to jump up and down,” van Rooijen says. “I really want them to enjoy themselves. It’s a scary ride, but it’s a fun ride as well.”