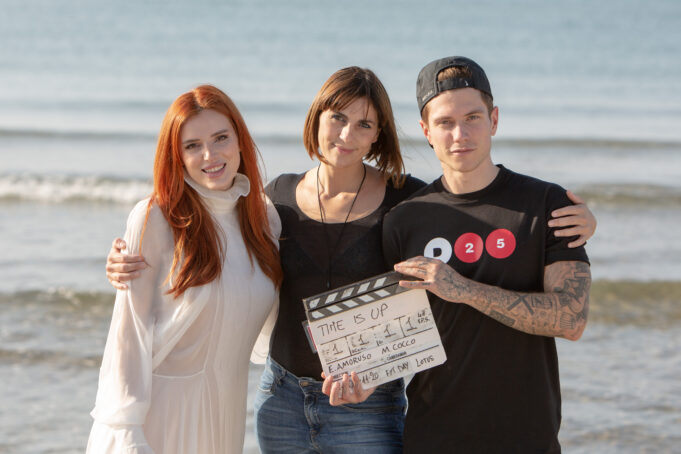 Writer-director Elisa Amoruso developed the screenplay Time is up with actors Bella Thorne and Benjamin Mascolo, working in complete synergy to create characters that would allow the audience to personally identify with the story.

For writer-director Elisa Amoruso, Time Is Up was born from the challenge to make a film that not only spoke to an Italian audience but to an international one too, aiming for a Young- Adult audience by telling a great love story and putting into play the intriguing themes of time and memory.

As a producer, Marco Belardi’s vision was to develop a romance which at the same time were heavily suffused with sensuality, and in order to do that, it was crucial to choose the right actors, a couple with an instant and unquestionably synergy, which would allow the audience to personally identify with the story. It was vital for the roles of Roy and Vivien to try and involve one or two stars, to bring out the full potential of the film and create a product with Italian roots, but with an international profile.

“Time is up is a film that emerges from a reflection on time and how the circumstances of an event can change the lives of two people who meet and are destined to be together,” says director Elisa Amoruso, who crafted the screenplay with Patrizia Fiorellini and Lorenzo Ura, based on a story by Marco Belardi and Fiorellini.

“Memory is the thread that links the characters of Vivien and Roy, it is what unites them and at the same time separates them. We developed the characters together with the lead actors, Bella Thorne and Benjamin Mascolo, beginning from the script and deciding together, from the very start, which were the right elements of each character to bring out,” says Amoruso.

Vivien (Bella Thorne) and Roy (Benjamin Mascolo) are two teenagers who appear to have starkly different personalities. Vivien is a talented student with a passion for physics and is keen to get a place at a prestigious American university. She lives her life as a mathematical formula and this drives her to see her own happiness as something to be postponed into the future. Roy, on the other hand, is a troubled young man, tormented by a childhood trauma that seems to haunt him relentlessly, making his dreams continuously go up in smoke. But even exact sciences have their variables and, as always, life manages to weave events together in surprising and unexpected ways.

“Vivien, played by Bella, is a volatile and ambitious girl but she is also insecure and extremely vulnerable. It is precisely this fragility that struck me about Bella’s interpretation: during filming I was able to capture her ability to suddenly break down and collapse, even simply through a blank stare or lost expression, giving a clear indication of the depth of the work Bella Thorne has put into her role.”

“Working with her in complete synergy has been a unique experience, we were always in agreement on the character’s development and it was real teamwork. It was wonderful for me to feel supported by a young woman who is also highly professional and so very talented. For Benjamin, unlike Bella, it was his first film though he had studied acting in Los Angeles. Our journey together was based on trust, Ben took on all my suggestions, and followed in an empathetic way the development of his character. It wasn’t easy for him to work with the pressure and the tight schedule of filmmaking, but despite that, he did an excellent job. I am very proud of his journey and the result, Ben is truly talented and has great potential still to be explored.”

Time is up has become a project that aims to connect with the audience not only through the film itself but also through powerful social networks and multimedia communication, with the aim of growing and retaining its audience.

“Together with them and thanks to their confidence and our reciprocal respect, Bella and Ben were able to transform Vivien and Roy into a real couple.”

As far as the look of the film is concerned, Amoruso I worked closely with the director of photography, Martina Cocco, and with the set designer Tiziana Liberotti, on the creation of sets with their own personality, wrapping the characters in warm tones in cold settings so as to create a contrast between the character’s outside spaces and inner selves.

“The camera moves constantly, spinning round and round in order to highlight their sense of loss, it zooms into tight close-ups to capture their deepest emotions and hidden nuances. Vivien’s memory adds different layers of reality to the film. It is reconstructed by means of sudden flashes, fleeting images, soft colours and distant, muffled sounds that blend with the confusion of memory, almost suspended between dream and reality. In this sense Time is Up has been a challenge for me: to revisit the teen genre in a different light, trying to recreate every aspect of a journey in search of one’s identity through love .”

Following a degree in Literature with a specialisation in Performing Arts, Elisa then obtained a diploma in Screenwriting at the Centro Sperimentale di Cinematografia in Rome.

Her directing debut was the documentary Off Road, winner of the special mention in the Prospettive section of the Rome Film Festival 2013 and nominated at the Silver Ribbons awards. Strane Straniere is her second feature-length documentary, featured at the Festa del Cinema di Roma 2016, winner of the Afrodite Award. Writer and director of the feature film Sirley, produced by Bibi Film and distributed in cinemas by Bim distribution, based on her novel of the same name, published in August 2020.

She has written and directed an episode of the series Illuminate, namely the episode about Palma Bucarelli. Author of the Netflix series Fidelity, based on the novel by Marco Missiroli.

A professor in screenwriting at La Sapienza University in Rome, she alsoteaches directing at Rufa (Rome University Fine Arts) and holds seminars at the Centro sperimentale di Cinematografia