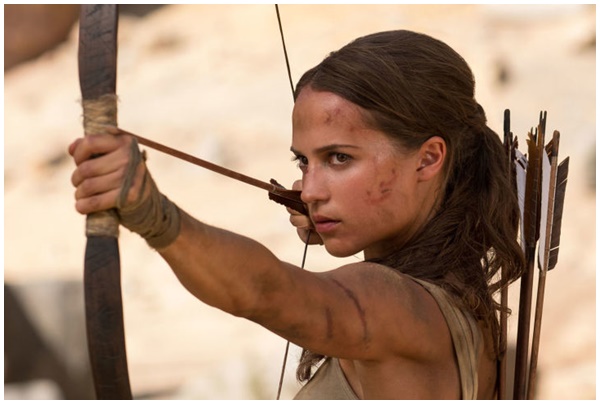 Audiences are going to really enjoy watching Lara Croft find out who she is and what she’s really made of.

The epic feature Tomb Raider reveals an all-new origin story that not only takes audiences inside Lara Croft’s very first adventure, but also completely into the heart and mind of a character who, in order to find her place in the world, must connect her future with her past.  The film explores not only the choices she makes but why she makes them, as we discover how she came to be one of the greatest and most popular action heroes of all time.

The film is peppered with numerous touchstones from the hugely successful, critically acclaimed 2013 “Tomb Raider” videogame—the biggest seller in the entire franchise’s history—which served as a key source of inspiration for the filmmakers, as did the updated take on the character herself.

Lara Croft (Alicia Vikander – The Danish Girl) is the fiercely independent daughter of an eccentric adventurer who vanished when she was scarcely a teen.  Now a young woman of 21 without any real focus or purpose, Lara navigates the chaotic streets of trendy East London as a bike courier, barely making the rent.  Determined to forge her own path, she refuses to take the reins of her father’s global empire just as staunchly as she rejects the idea that he’s truly gone.  Advised to face the facts and move forward after seven years without him, even Lara can’t understand what drives her to finally solve the puzzle of his mysterious death.

Leaving everything she knows behind, Lara goes in search of her dad’s last-known destination: a fabled tomb on a mythical island that might be somewhere off the coast of Japan.  But her mission will not be an easy one; just reaching the island will be extremely treacherous.  Suddenly, the stakes couldn’t be higher for Lara, who—against the odds and armed with only her sharp mind, blind faith and inherently stubborn spirit—must learn to push herself beyond her limits as she journeys into the unknown.  If she survives this perilous adventure, it could be the making of her…earning her the name tomb raider.

Director Roar Uthaug (The Wave), who grew up playing all of the games, states, “I was blown away by the game play, and of course by the character of Lara Croft, a kickass girl who solves all the puzzles, avoids all the traps and raids the tombs.  But when I saw what they had done with the game in 2013, I was really excited with the authentic, gritty take on the character, and thought it was definitely something that would transfer to the big screen.”

Vikander, originally from Sweden, was eager to work with fellow Scandinavian Uthaug, who hails from Norway.  “I’ve seen several of Roar’s films and I think he’s great.  His passion clearly lies with genre films and all the classic elements that kind of film has, yet his stories are also very emotional,” she relates.  “I really felt for his characters in ‘The Wave,’ and I was excited to be a part of what he would do with this big adventure, knowing his ability to keep you connected to the emotional side.”

Roar Uthaug graduated from the Norwegian National Film School in 2002.  His graduation film, The Martin Administration, was the second Norwegian student film in history to be nominated by AMPAS for the Student Academy Awards. Uthaug’s feature debut, Fritt Vilt (Cold Prey), was released in Norway on October 13, 2006, became a huge box office hit, sold to 40 countries and spawned two sequels.  He went on to co-direct a children’s adventure, Julenatt I Blåfell (Magic Silver) in 2009, an even bigger success.  The medieval action movie Flukt (Escape) followed in 2012, selling to more than 70 countries and putting Uthaug on Variety’s list of 10 Euro Directors to Watch.  His fourth feature, 2015’s The Wave, the first-ever Scandinavian disaster movie, was the highest grossing film in Norway that year and the official Norwegian entry for the Academy Awards. All of Uthaug’s films have travelled extensively on the international festival circuit.  In between features, he has directed commercials across the globe, winning numerous awards.

Prolific veteran producer Graham King, who obtained the film rights to the property several years back, says he, too, was eager to bring this expanded conception of the character’s history to cinemas.

“Lara Croft is one of the rare strong and successful female leads in the genre world, especially in movies.  It’s been quite a while since we’ve seen her and I think the timing couldn’t be better to revisit her character and introduce her origins, in a way that speaks to today’s world.  The tone has changed, the story has a lot of drama and emotion to it, along with practically nonstop, incredible action sequences, and I think a modern audience will enjoy going through this journey with her as much as the gamers do.”

Growing up, Vikander was also a player, and an even bigger fan.  “As a young girl, I didn’t have any videogames, so I was always very excited to go to our friends’ houses who did,” she recalls.  “I remember when they played “Lara Croft,” what struck me was that I hadn’t seen a girl being the lead character in a game before.  She was not only a woman, but she was extremely fierce, determined and capable, and that really drew me to her.  Of course, I was only about ten, so I mostly spent my time in the game doing the training in the big Croft manor!”

Vikander, who naturally advanced her level of play as she became a teen and beyond, says, “When I heard about this film, I went and bought the newer games as well.  It really felt like it was the essence of Lara from the earlier versions, but now we got to follow her from the beginning.  For me, she’s like the superheroes and action heroes we love; by seeing their journey to become the ‘super’ versions of themselves, we get to feel close to them and get to understand them, emotionally.”

As in the games, the filmmakers aimed for the action in the film to feel real and the audience to feel as if they’re in the midst of it all, experiencing the events through Lara’s eyes: running at full speed, fighting at full force, shooting a bow and arrow while dodging bullets—along with all manner of deadly obstacles—and solving impossibly intricate puzzles with mere seconds to spare.  It takes every ounce of strength, skill, smarts and stamina Lara can muster to get through any one of her amped-up exploits, which is precisely why enthusiasts the world over love her videogames: they drop the player in the middle of the action and take them on the virtual ride of a lifetime, every time.

Geneva Robertson-Dworet (Screenplay / Story) has extensive writing credits that include the all-female spinoff of the Suicide Squad franchise entitled Gotham City Sirens, and most recently the Captain Marvel feature. Additionally, Robertson-Dworet has twice appeared on the acclaimed Blacklist, with her original features Aries, currently in development, and Hibernation.She is a graduate of Harvard University, and is currently based in Los Angeles.

Alastair Siddons (Screenplay) is a writer, director and producer across documentary and drama formats. His debut drama screenplay, Trespass Against Us, which he also produced, premiered at the Toronto International Film Festival in 2016. Siddons is currently writing a film entitled Hyper, as well as an episode for Steve McQueen’s as-yet-untitled BBC series.  He is also working on a TV series with DMC Film, which will star Fassbender.

Siddons has directed two documentary features: Turn It Loose, and Inside Out: The People’s Art Project, which premiered at the Tribeca Film Festival in 2013 and aired on HBO in 2014.

Evan Daugherty (Story) has established himself as a blockbuster screenwriter in Hollywood, with his work at the center of a number of highly-anticipated projects.

Daugherty’s Snow White and the Huntsman was released in the summer of 2012 and went on to become a worldwide hit.  Also produced is Daugherty’s independent action thriller Killing Season, formerly Shrapnel.  He also penned the adaptation of Veronica Roth’s best-selling young adult book, Divergent.  Also in 2014, Daugherty wrote the successful big-screen adaptation of Teenage Mutant Ninja Turtles, the beloved comic book and animated series, for Michael Bay.In addition to his work in features, Daugherty has sold and developed multiple television pilots for ABC, NBC, Syfy and Hulu.

“I’ve been playing ‘Tomb Raider’ games for most of my life, watching all the while as Lara Croft, the fascinating character at the heart of the expansive mythology, has grown into a true pop culture icon,” Daugherty says.  “It was an honor to help shape this dramatic new reinvention of the character and the franchise.”

In the film, Lara’s journey really begins when she’s asked to acknowledge an “official” end to her father’s life.  Feeling cornered, what the rebellious young woman accepts instead is one last puzzle box containing a clue to her dad’s fate, which leads her to believe things might not be so final, after all.  What she finds will ultimately take her far from home, even to the farthest corners of the Earth.

“The father-daughter relationship is at the core of our story,” Uthaug notes.  “He abandoned her, yet she clearly cannot let go of him.  It’s created a void in Lara that she’s been trying to fill, and this final puzzle box quite literally provides the key that starts her investigating what happened to him, and leads her to embark on this great quest.”

“As with any classic adventure that I’ve loved,” Vikander says, “this film has the big sets, the mystical doors opening and the mysteries inside them evolving in front of you as you go on a truly exciting adventure.  At the same time, on this same journey, I love Lara’s curiosity and her stubbornness, her passion, and that she dares to open herself up, to believe in magic.  I hope audiences get to know this Lara Croft, feel the struggle and the pain she goes through right along with her, and root for her as much as I do.”

King agrees with his star, adding, “This movie is absolutely for all audiences—young, old, male, female—because it really does have a strong, emotional family connection at the heart of a big, action-packed, superhero-type film.”

“When Lara Croft sets out on this journey, she’s not ready for what’s coming to her,” Uthaug asserts.  “She really has to rise to the challenge and, through her many ordeals, discover if she can become the Tomb Raider, ready for any adventure that might be coming for her.  I think audiences are going to really enjoy watching Lara find out who she is and what she’s really made of.”