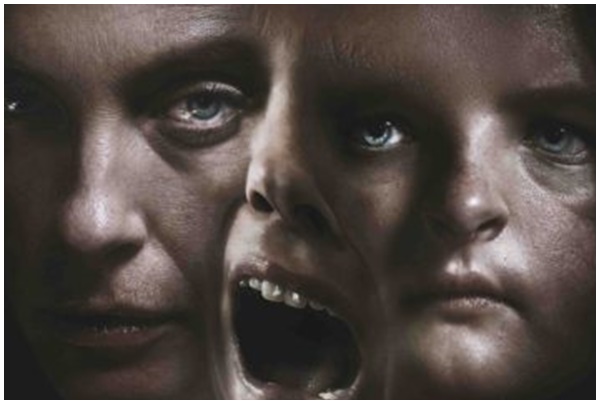 “This is a movie about inheritance–the notion of having no choice in who your family is or what’s in your blood. It’s about the horror of being born into a situation over which you have no control. There’s nothing more upsetting to me than the idea of being absolutely powerless.”

Loosely inspired by writer-director Ari Aster’s family’s own experience with tragedy and grief-a prolonged succession of misfortunes that came to resemble a curse, Hereditary­ marks the arrival of a born auteur, exuding the formal precision and expert control of a master filmmaker.

With his debut feature, writer-director Aster builds on a series of critically acclaimed short films centering on domestic rituals and trauma, telling the terrifying story of one American family battling malevolent forces that seek to colonize its bloodline.

Through Aster’s meticulous craft and vision, this shattering debut transforms the domestic drama into a work of operatic horror calling to mind classics of the 1960s and ’70s.

When Ellen, the matriarch of the Graham family, passes away, her daughter’s family begins to unravel cryptic and increasingly terrifying secrets about their ancestry. The more they discover, the more they find themselves trying to outrun the sinister fate they seem to have inherited. Making his feature debut, writer-director Ari Aster unleashes a nightmare vision of a domestic breakdown that exhibits the craft and precision of a nascent auteur, transforming a familial tragedy into something ominous and deeply disquieting, and pushing the horror movie into chilling new terrain with its shattering portrait of heritage gone to hell.

Led by a stellar cast including Toni Collette (Little Miss Sunshine;  United  States of Tara), Gabriel Byrne (HBO’s In Treatment; The Usual Suspects), Alex Wolff (Jumanji: Welcome to the Jungle), Milly Shapiro (Broadway’s Matilda) and recent Emmy-winner Ann Dowd (The Handmaid’s Tale), and featuring a memorable score by avant-garde saxophonist Colin Stetson, Hereditary is an astonishing debut from a writer-director whose reign is only beginning.

Ari Aster received his MFA in Directing from the AFI Conservatory. He has written and directed several short films, most notably Munchausen, Basically and the controversial 30-minute The Strange Thing About the Johnsons. His films have played in the New York Film Festival, Fantastic Fest, Slamdance and many others. Hereditary is his first feature film.

Aster began envisioning Hereditary after his own family endured a string of trials over a pummeling three-year period.

“Things had gotten so relentlessly awful that the feeling prevailed that we basically must be cursed. I’m always writing from a personal place, but I also love genre, and I’d never want to  baldly dramatize  any of the suffering that I or my family had gone through, so by taking the idea of a family being cursed and then literalizing that, I was able to put a lot of those feelings through a horror movie filter, where the canvas demands a high level of catharsis. And if you’re making a film about life being unfair, the horror genre is a very unique playground for that. It’s this sort of perverse space where life’s injustices are more or less celebrated and even gloried in.”

Taking his cue from seemingly unlikely sources such as Ordinary People, The Ice Storm, and In the Bedroom--searing dramas in which multigenerational families grapple with death, mental illness and emotional violence–Aster flips the script on the domestic tragedy by pushing Hereditary into the realm of supernatural horror.

He brilliantly fuses the substance of these emotional dramas with creative inspiration from iconic slow-burn shockers of the ’60s and ’70s, including Rosemary’s Baby, Don’t Look Now, and The Innocents. “These were character-driven, sophisticated movies that really took their time,” remarks Aster. As he began writing, Aster shaped the story of a family that is literally cursed, suffering through a series of gruesome events revealed over time to be part of a grander Machiavellian scheme.

The film’s title takes on increasingly chilling resonance as the story progresses, taking its subject of lineage and bloodlines into the realm of supernatural horror and beyond.

“This is a movie about inheritance–the notion of having no choice in who your family is or what’s in your blood,” says Aster. “It’s about the horror of being born into a situation over which you have no control. There’s nothing more upsetting to me than the idea of being absolutely powerless.”

In its rigorous examination of free will and its damning insistence that everything is ordained and inevitable, Hereditary takes a fatalistic stance toward breeding and generation. “The fact that the Grahams have no agency is a crucial point in this movie, and the feeling at the end is one of hopelessness and futility,” says Aster. “I wanted to make a simultaneously intimate and large-scale horror film that absolutely refuses to let the viewer off the hook. My hope is that it stays with people for a long time, and provokes them to contend with something deeper and more primal, a feeling of something inescapable.”

Aster has made impressions on the festival circuit and across the Internet with his remarkably assured short works, miniature psychodramas bearing the scale and scope of established classics. In the silent film Munchausen, a mother played by Bonnie Bedelia plunges into grief and guilt after tampering with her college-bound son’s rite of passage into adulthood. In The Strange Thing About the Johnsons, a sensation that played at the New York Film Festival before going viral, Aster flips the script on the 1950s-style domestic melodrama with a lurid account of incestuous sexual abuse-perpetrated by an adult son against his aging father.

Both films deal with sacred family rituals and traditions turned toxic,  finding  dark  comedy  and   hysteria   in   uncomfortable   yet   recognizable   subjects. Both are masterfully plotted and executed-the work of a born filmmaker whose pacing, plotting, and visual command feel supremely deliberate.

Like Hereditary, his work examines power dynamics inside families in original and unpredictable ways. “I’ve always been interested in wavering power dynamics,” says Aster, “and those are never more insidious or consuming than when they’re playing out among family members.”

Aster finds an unlikely source of inspiration in the films of Mike Leigh, whose unique process with actors “yields the most vivid characters and relationships. You feel their histories in a way that no other filmmaker approaches. I screened his film A// or Nothing for the crew, just to throw them into the spirit of what I was hoping to do.”

The Grahams are a seemingly ordinary, relatable American family plunged into grief in Hereditary’s gripping opening minutes. Grappling with the loss of Ellen Leigh, Annie’s mother and a cryptic matriarchal figure for the entire family–a figure whose legacy becomes increasingly sinister as the story unfolds–the Grahams process the death in disparate ways. When Annie attends a bereavement support group, we learn more about her late mother’s life and heritage-and Annie’s feelings of alienation inside her own family.

“Annie is someone who has a lot of issues with her mother, but can’t quite seem  to get to the bottom of them,” says Aster. “There are intimations as to what Ellen was up to when she was alive, but Annie can’t fully piece them together. There’s probably a large part of her that doesn’t want to know what her mother was doing. It’s something she knows in her gut, but she has to deny it. If she looked straight at it, she’d be destroyed.”

A stay-at-home artist who is preparing for an imminent gallery show, Annie processes her angst by making art out of her life-miniature dollhouses depicting the Graham family’s real-world trials and tribulations, including Leigh’s hospice care before her death. “She’s creating these miniatures of real places and situations in her life, perfect little replicas that give her the feeling of having seized some control over her life and experiences and memories,” says Aster. “But it’s an illusion.”

Annie’s husband Steve (Gabriel Byrne) is a good-natured but fleeting presence who spends long hours seeing clients in his suburban psychotherapy practice; teenage son Peter (Alex Wolff) is adrift in high school, fumbling through classroom discussions about Greek classics and sneaking joints with his stoner friends in between classes. Younger daughter Charlie, in remedial courses, bides her time brooding in the family tree house and quietly fabricating disturbing totems made from animal parts and household trinkets.

“Peter doesn’t have a lot of direction in life-he has no serious interests and hasn’t really formed a solid identity- but it becomes the bleak joke of the film that, by the end, he’ll have been given a real sense of purpose,” says Aster. Charlie isn’t so lucky, however. She is tightly wound, extremely quiet and is crippled by social phobias. But there’s more that’s darkly off-kilter about her. As more is revealed, the Grahams come to feel like pawns being moved around by forces existing in the story’s periphery.

After introducing the Grahams, Hereditary teasingly shifts direction  into the realm of a ghost story as Annie strikes up a friendship with Joan (Ann Dowd), a suburban housewife who is grieving the loss of her own recently deceased kin. She persuades Annie to join her in a séance, hinting at paranormal dimensions for the story’s second half. But in the hands of Aster, whose works frequently pivot on perceived and upended expectations, Hereditary  doesn’t stay one kind of movie for long; it’s a continually surprising, perpetually unfolding work that’s designed to challenge, terrify and surprise with each successive turn of its shrewdly crafted plot.

“I wanted to do my version of Janet Leigh stepping into the shower,” says Aster in reference to Psycho as he describes his shifting narrative. In its tense and terrifying second half, Hereditary goes to places few audiences will anticipate. Suffice it to say that the family turmoil Aster depicts in his debut feature continues the thread of familial dread and manipulation he initially wove with Munchausen and The Strange Thing About the Johnsons, carefully embroidered nightmares about the horrors of family life.

Hereditary gestated over the  course  of  several  years  before  it  began production in Spring 2017, with Aster composing detailed biographies and backstories for his characters prior to even writing the screenplay.

He also designed a 75-page shot list outlining his very specific vision for the cinematography well in advance of financing being secured, locations scouted, or scenes filmed.

Aster was so passionate and dedicated to bringing his vision to life that he started contacting potential collaborators years before the project was officially greenlit by producers.

He reached out to Colin Stetson, the well-known saxophonist and composer (who has worked with musicians such as Arcade Fire, Bon Iver, and Tom Waits), two years prior to production to ask him to compose the score.

He was working  with other key crew members for months and years before the shoot began to  start building  a network of collaborators who could help him achieve his singular vision.

Even though there were no guarantees of when or how the film would be made, and even though he was a largely unknown first-time filmmaker, he convinced many talented, top-tier people to join him on the journey from the earliest stages.