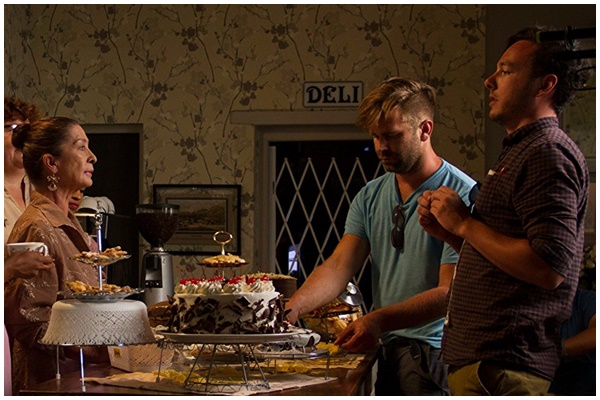 Writer-director Etienne Fourie blew our minds with Die Windpomp, captured our hearts with Dis Koue Kos Skat and now bewitches us with the magical Liewe Kersfeesvader

Etienne completed his B.A.(Hons.) in Motion Picture Medium (Screenwriting & Directing) in 2011 at ADFA film school in Cape Town. Etienne’s screenwriting credits include Klein Karoo (2013) for director Regardt van den Bergh, Strikdas (2015), Die Bakker (2017) and Barnard (2017). Etienne also serves as script-doctor on many other projects including Verskeitende Ster (2016) for director Darrell Roodt. In 2013 Etienne made his directorial debut with the critically acclaimed feature film Die Windpomp which he also wrote the screenplay for. Die Windpomp premiered at the Australian Gold Coast Film Festival and was nominated for 9 KykNET Silwerskermfees-awards, of which the film won 5, including Best Film, Best Screenplay and Best Director in 2014. In 2015 Etienne directed Dis Koue Kos, Skat for executive producer Deon Meyer, based on the novel by Marita van der Vyver and co-wrote the screenplay together with the author.

Liewe Kersfeesvader is a story that is incredibly personal to me. It deals with themes of family (being, above all, dramatic), the always-rocky transition from childhood to adulthood and, above all, love. It allows a glimpse into the lives of a typical, seemingly inconsequential family, which undergoes extraordinary challenges. It is a story about choosing to love and accept your family, not despite but rather for their imperfections.

Why did you choose to make a Christmas-inspired film?

With a vast quantity of Hollywood Christmas films – mostly starring Tim Allen – we have a truly wonderful opportunity to make a film that is unique, told by South Africans, about South Africans, for South Africans, with themes that are universally appealing. There is a real sense of pride in that, which motivates me more than anything.

Were your childhood Christmases a very special time for you?

My crush on this holiday is not based on past events – nearly all of my childhood Christmases were utter disasters. Family drama, weather, family being dramatic, fires, illness, annoying dramatic family, financial turmoil, relatives with flares for the dramatic, power cuts and even death. Instead it is the hope, more than anything, that excites me – the hope that next year will be better.

How did you approach the story?

It was important to me to show how we really do Christmas, but not to romanticize it to the point where the film may start, excuse the pun, to ‘snowball’ into new traditions. One such example is the characters using a true South African icon, the Aloe, as their Christmas tree. Other strong South African imagery is used throughout – Proteas for Christmas ornaments and decorations, “Melktert” as the perfect combination of cookies and milk for Santa, as well as the story being set in the hot, arid environment of the Karoo – as far away from the North Pole as possible.

The intention with the film’s design is to create a narrative world that, firstly, is familiar to a South African audience, and then turning it on its head – allowing a novel look at a well-established culture.

All the elements of the cinematography for Liewe Kersfeesvader, the lighting, composition and camera movement work together to enhance the nostalgic Afrikaans sentiments that the story conveys. The lighting is mostly warm, soft and low-contrast that compliments the colour palette’s warm and soothing hues.

The composition makes use of the Karoo landscape in such a way that it becomes a character in the film. These wide scenic shots are juxtaposed with intimate shots of the characters’ lives and experiences.

Camera movement enhances the characters’ emotions and support the narrative without being overbearing.

Why did you elect to shoot the film in Prince Albert in the Karoo?

The Karoo is iconic and culturally relevant, but it is a setting that also allows for a dramatic and beautiful juxtaposition between the characters and their environment. When thinking about Father Christmas, images of snow and ice inevitably spring to mind. Having Herman, as Father Christmas, sweating his way through his arid hometown, creates a constant sense of conflict and struggle.

As the characters learn to accept their family – and themselves – they also learn to appreciate the beauty of their town, creating new versions of established traditions in the process

Tell us about the film’s soundtrack

The iconic song, “Kyk Hoe Glinster die Maan” by Laurika Rauch is the centerpiece of the films soundtrack. The overall score is predominantly melancholic, with moments of upliftment, making use modern folk-rock and elements of classical music.