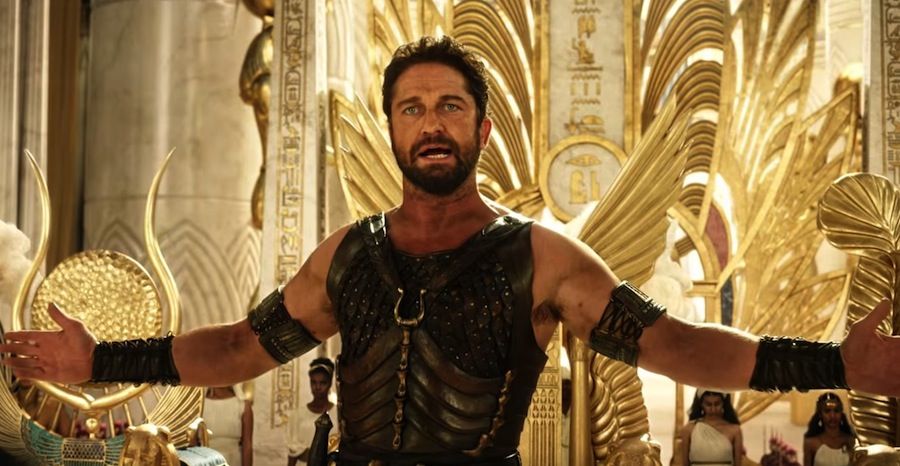 A completely unique, one-of-a-kind world by combining the timeless art of storytelling and the latest in digital cinema technology.

The power of ancient myths and the imagination of today’s most gifted storytellers have come together for the rousing action/fantasy/adventure Gods of Egypt, a grandly entertaining spectacle that transports audiences into a vivid universe of larger-than-life figures locked in an epic battle.

Imagine a world carved from stone and gilt in gold. Visually futuristic, this realm conjures an alternate world where ancient gods live among mortals.

This coexistence between beings existed so long as there was peace, but the trust between man and God has been shattered by hubris, jealousy and betrayal as the destruction of all creation dawns nears.

In this spectacular action-adventure,  the survival of mankind hangs in the balance as an unexpected mortal hero Bek [Brenton Thwaites] undertakes a thrilling journey to save the world and rescue his true love. In order to succeed, he must enlist the help of the powerful god Horus [Nikolaj Coster-Waldau] in an unlikely alliance against Set [Gerard Butler], the merciless god of darkness, who has usurped Egypt’s throne, plunging the once peaceful and prosperous empire into chaos and conflict.

As their breathtaking battle against Set and his henchmen takes them into the afterlife and across the heavens, both god and mortal must pass tests of courage and sacrifice if they hope to prevail in the spectacular final confrontation.

Visionary director Alex Proyas has created an otherworldly Egypt, beyond time and history, in which moviegoers voyage through dazzling cityscapes, mythological characters, and epic heroism in this pulse-pounding, fantasy action-adventure

Proyas envisions a completely unique, one-of-a-kind world by combining the timeless art of storytelling and the latest in digital cinema technology.

Writers Matt Sazama and Burk Sharpless sought to give audiences a thrilling, elaborate adventure that is part homage, part invention and fully inhabitable as a transporting experience.

Using the Osiris myth as a blueprint –Gods of Egypt re-imagines the tale of the sun god Ra, his vengeful son Set and Ra’s dutiful grandson Horus, folding several classical narratives into one adrenaline-pumped film following the journey of a mischievous mortal who joins forces with a fallen god to save all of creation from chaos and tyranny.

Bringing to life a complex array of fictional characters, Gods of Egypt is an original story, unlike anything viewers, have seen.

Creating the luxurious, fantastical world of Gods of Egypt required contributions from across the globe

A truly international production, Gods of Egypt is a collaborative feature drawing creative and technical teams from around the world.

The film’s stunningly visual experience, intricate special effects and detailed setting are the results of some of the industry’s most talented artists including Australia’s Iloura and Rising Sun Pictures as well as cutting-edge VFX, animation and design companies from the United States, Tippett Studios, who assisted in stop-motion and computer-generated animation; and Aaron Sims Company, who played a key role in character design. Montreal’s RODEO FX participated as well, providing valuable expertise in creating the environment.

Who’s Who In The Gods Of Egypt

Ra [Geoffrey Rush]: Father of Osiris and Set, Ra is the Lord of Light and the Cosmos. It is his duty to pull the sun over mythological Egypt at the end of each day. As he does so, he passes into the chaos of the underworld where he fights the demon Apophis. After he beats Apophis back each night, Ra returns to the living world bringing with him the light of a new day. Ra is the creator of this world and its ultimate guardian. He possesses insight beyond any living god or mortal and views the gift of life as a lesson and a journey. In his eyes, both Osiris and Set were equal. Ra’s deity, while humble and duty-driven, is the most powerful and dominant god standing nearly 20ft tall in his enhanced form and wielding a spear as his weapon.

Set [Gerard Butler]: Son of Ra and god of the Desert, Set is plagued by jealousy. In Set’s eyes, his father apparently favours his brother Osiris, the God of Nature and Life, who is deemed to be a wise ruler and merciful facilitator of human souls into the Afterlife. Set believes that mortals are dispensable and far inferior to the gods. Set puts his pursuit of power, authority and material wealth above all else. Set’s deity is an armoured jackal creature, and his weapon is his sceptre.

Horus [Nikolaj Coster-Waldau]: Horus is the Lord of the Air. While his ego is initially inflated by his status as a god, through his association with Bek, Horus slowly learns to respect mortals, and even develops a liking for them. It’s a change of heart he’ll need if he’s going to avenge the death of his father Osiris and retake the throne from the usurper Set. Horus’  deity is a winged and armoured form with a falcon-shaped head. His power resides in his eyes.

Hathor [Elodie Yung]: Goddess of Love, Music and Alcohol, Hathor is desirable to everyone who lays eyes on her. Once known as the Mistress of the West, Hathor was responsible for guiding souls to the Afterlife. Hathor wears the Bracelet of Forty-Two Stars to keep the demons of the dark realm of chaos from pursuing her.

Thoth [Chadwick Boseman]: The God of Wisdom, Thoth possesses the entire world’s knowledge. While Thoth is a genius, he is very self-aware of this fact and uses it to undermine others. His ego is also largely tied up in his perceived intellect. Thoth struggles to trust anyone other than himself, a problem which he has overcome by creating hundreds of automatons, all identical to him. Thoth’s deity is an ibis and his intellectual prowess is unmatched.

Astarte [Abbey Lee] and Anat [Yaya Deng]: Two goddesses of war, Astarte and Anat are both beautiful and brutal. They command and ride two enormous serpents (Anat’s is black, and Astarte’s is white) whose venom burns like liquid fire.

Bek [Brenton Thwaites]: Affably mischievous, Bek comes from modest beginnings and has little to offer the woman he loves, Zaya, aside from his heart. Having lost faith in the gods, Bek relies on his own zeal and ingenuity to make his way in life.

Zaya [Courtney Eaton]: The beautiful and humble Zaya is resolute in her faith in the gods, believing that they provide everything a mortal could possibly need. Although she’s somewhat wiser than Bek and knows that material possessions are of little importance, she loves him nonetheless.

Urshu [Rufus Sewell]: The most feared man in Egypt, Urshu has been tasked by Set to oversee the construction of his giant Obelisk and is given Zaya as his own personal slave. Out for his own self-interest, Urshu is overly concerned with gold and material wealth

Alex Proyas [Director] is an Australian film director/writer/producer. Born in Egypt (of Greek-Egyptian ancestry), he migrated with his parents to Australia at age three. Proyas grew up in the government housing tenements of inner-city Sydney. With a passion for art and film from an early age, he was given his first Super-8 camera for his 10th birthday. During his graduate course at the Australian Film & TV School his short film, Groping, received international acclaim, including the award for Most Outstanding Short Film at London International Film Festival, in 1982. His early career was highlighted by many multi-awarded music videos and ad campaigns. He completed his first feature, Spirits, in 1989 which won numerous international awards, and a short he wrote and directed, Welcome to Crateland, screened in competition Cannes ’94. Also in 1994, he completed work on The Crow, starring Brandon Lee, released by Miramax. The film was a critical & commercial success. In 1998 he completed work on his 3rd feature film, Dark City, for New Line Cinema. Starring Rufus Sewell, Keifer Sutherland, Richard O’ Brien, Jennifer Connelly, Ian Richardson and William Hurt. The film has earned its place as a long-standing cult classic. In 2002 he completed Garage Days starring Kick Gurry, Pia Miranda and Maya Stange for Fox Searchlight. Invited to premiere at the Sundance Film Festival January 2003. 2004 saw the completion of Proyas’ I, Robot starring Will Smith. I, Robot has been Proyas’ greatest international commercial success to date. 2008 he completed Knowing starring Nicolas Cage & Rose Byrne which became another great worldwide commercial success for Proyas.

Matt Sazama (Right) and Burk Sharpless [screenwriters] wrote the original screenplay for Gods of Egypt. They previously wrote Dracula Untold, which won a Saturn Award for Best Horror Film, and co-wrote The Last Witch Hunter starring Vin Diesel. They’re currently developing a new version of the classic TV show Lost In Space for Legendary Television and Netflix. Matt and Burk were both born and raised in Wisconsin and share an unwavering love for the Green Bay Packers.