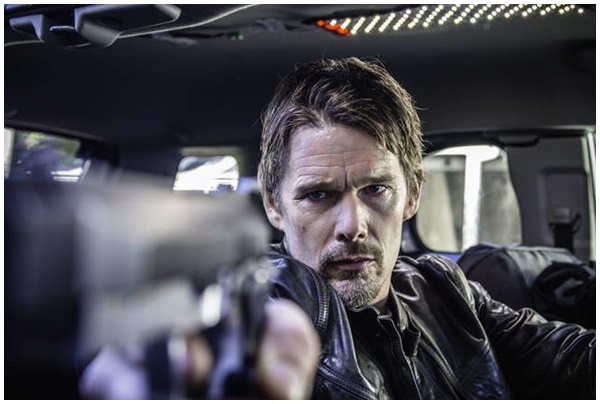 A story of this man’s journey in finding himself, who he is, and where he came from, what’s good about him, and what he lost.

It was the powerful human story underlying the action in 24 Hours to Live that caught the attention of Thunder Road Films producer, Kent Kubena, when he read the script co-written by Ron Mita and Jim McClain – who originally set the story in Washington D.C. “The film takes on a genre that is so much more than just an action film.” says Kubena.

The high-octane film is penned by Zachary Dean and based on Ron Mita & Jim McClain’s original script that follows Hawke’s career assassin who is given a chance at redemption after his employer brings him back to life temporarily, just after being killed on the job.

“Travis Conrad” (Ethan Hawke) is a former elite soldier devastated over the recent tragic deaths of his wife and young son, when his old army buddy “Jim Morrow” (Paul Anderson) shows up with an offer he can’t refuse.

Travis accepts the covert assignment, but everything goes completely wrong when he is shot and killed by an equally skilled female Interpol agent, “Lin Bisset” (Xu Qin) right at the moment he locates the target.

But, just when we think it’s curtains for Travis, he wakes up in an operating room, his body convulsing back to life – a recipient of Red Mountain’s brand new, highly experimental medical procedure that will give him 24 more hours of life… plenty of time for Morrow to extract the location of the target, information that only Travis knows.

Betrayed by his old buddy, Travis makes a break for it, determined to make up for a lifetime of mistakes in one final day on earth. With the ultimate clock ticking, he sets off to rescue the Interpol agent and at the same time take down Red Mountain in a fiery conclusion.

Executive producer, Jon Kuyper, describes film as an entertaining tale with some sort of morality and poetry weaved into it. “This poetry comes in the form of protagonist Ethan Hawke’s character, Travis Conrad’s ability to seek some form of redemption in his last 24 hours to live. The audience can go on a very personal, almost emotional ride with this character with great action.”

“This poetry comes in the form of protagonist Ethan Hawke’s character, Travis Conrad’s ability to seek some form of redemption in his last 24 hours to live. The audience can go on a very personal, almost emotional ride with this character with great action.”

“The film strives to embrace the humanity of its characters by making it as realistic as possible,” says producer, Gregory Ouanhon, who wanted to ensure that everything feels real in the film as the audience experiences all the action and the emotion alongside the cast. The element that establishes this a stand-alone film is that is presents the audience with an unfathomable concept.

Director, Brian Smrz, reflects on the premise: ‘what would you do if you could come back from the dead for just one day?’ What we see is a man who has the opportunity to truly search for some form of redemption in his last 24 hours to live. It’s really a story of this man’s journey in finding himself, who he is, and where he came from, what’s good about him, and what he lost when his family died.”

24 Hours To Live marks Smrz’s first feature film as a director. Smrz, who is highly regarded for his stunt work on blockbuster action films, the likes of X-Men: Apocalypse, Iron Man 3, Rise Of The Planet Of The Apes, and Live Free Or Die Hard, says he was drawn to the unique concept of the script and immediately wanted to tackle the material.

While these are all components in 24 Hours To Live, Smrz interweaves them with the personal narrative of one man’s search for redemption.

To realize this Smrz shares that he was given complete artistic freedom. This time he is more vested in the authenticity of an action sequence and chooses to not rely too heavily on special effects.

“I love that we have an R-rated film with real action, these days so much action is CG, and I’m not a big fan of that. Although my previous work has been on big budget CG films, my true heart is with real action so its really fun for me to get an opportunity to do that, and the R-rating gives you a chance to be more graphic and authentic.”

Smrz appreciates that the producers opened up a space that allowed him freedom to experiment and create an action movie as only he could. “They have really given me leeway to make the movie that I want to make. As a filmmaker that is an enormous bonus.”

Smrz stresses that he had the benefit of collaboration from cast as well as his team of filmmakers. Academy Award winning Production Designer, Colin Gibson, avers, “Ethan also has a lot of experience and he’s working closely with Brian on both the action and on the character development as we go. The collaboration was to get what is essentially an action movie to give it a resonance for the rest of the world.”

Gibson, who landed the Oscar for designing the spectacular sets in George Miller’s multiple Academy Award® winning Mad Max: Fury Road, says he always strives to create spaces that are unique to their genre, and enhance the scenes and the characters. “George always says, ‘look for the purple cow in the herd’. On 24 Hours to Live we tried as far as possible to find new references so that we don’t repeat ourselves, or fall back on easy responses.”

“We shot a movie in Cape Town several years ago and fell in love with the area and we wanted to bring something unique to this very unique concept – a strong human drama in the action genre – so Cape Town as the space where the film is set was a unique decision and a pivotal part of the over all narrative.” says Kubena.

Kuyper, who has successfully shot eight films in the city, which is one of the world’s most popular off-shore filming destinations – with a diverse offering of locations – opines: “one of the most compelling things for me is the opportunity to shoot Cape Town for Cape Town, which is really rare, and I’ve always wanted to do that.”

The fact that Cape Town is such a pivotal part of the unfolding of the narrative adds to its distinctive character.

“Most filmmakers who make films and commercials in Cape Town often shoot these as sets for other places. Our aim was to try and showcase the city, all the color, and contrasting culture.” Gibson is also inspired by the fact that – purely based on the variety of locations in and around the city – Cape Town serves as a canvas that can be converted into an array of other spaces and places. “We shot out in the veld, in the lagoons, on the beach, and sequences set in the township, Khayelitsha, an informal settlement in close proximity to the city. These all added layers of great color, vibrant culture, and diverse communities. We were able to use the old city buildings to sort of ‘sell’ what we call the United Nations, the goodies in our group: Interpol against the baddies who are headquartered in Red Mountain.

Given Smrz’s considerable reputation in the action genre generated excitement among the producers when he decided to captain the 24 Hours to Live.

Kuyper stresses that Brian Smrz “is long over due to move into the role of director. It’s been a pleasure working with him.”

“Brian has always kind of been in the background and we saw this as a great opportunity to bring him to the forefront, and hopefully launch him as a big, First Unit director.” says Kubena.

Smrz carefully balances the action element so it doesn’t eclipse the human story of the harrowing personal journey Hawke’s character makes in the last 24 hours of his life.

“Brian has a passion for action movies, he is intimate with action.” says Hawke who adds that when making a decision to be involved in a film he tries to “sniff out if people are sincere in loving movies. You know, because if you love movies and you have the right team behind you, you can do something valuable, it’s a certain kind of energy that you have that makes good movie, and I felt that Brian really has this.”