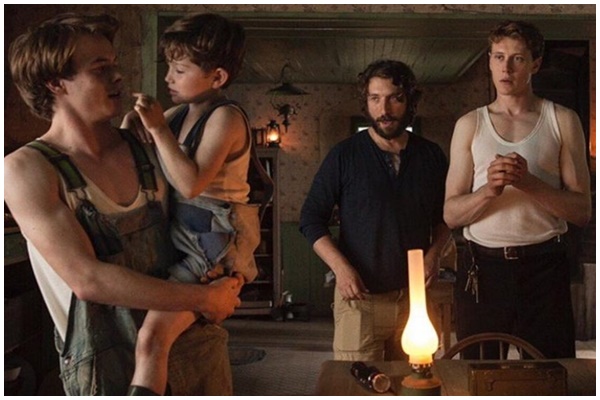 “What’s difficult about this film is talking about it without revealing any of the details. The audience is going to find a very rich universe, full of nuances, with many turns and, above all, a lot of emotion.”

Sergio G. Sánchez is responsible for writing some of the best screenplays in recent Spanish cinema. He is praised for his ability to manage emotions and connect almost immediately with the audience, and is well known for The Orphanage and The Impossible, which were both helmed with great success by his friend J.A Bayona.

Although Sánchez describes himself as a filmmaker first and a screenwriter second, he had been searching for a story that was powerful enough to take on as a director.

A young man and his younger siblings who have concealed the death of their mother to remain together are plagued by a sinister presence in their home.

“On a train trip, talking about stories that he had liked, talking about classic cinema and old films, the seed of Marrowbone emerged,” says producer Belén Atienza. The working relationship between Atienza and Sánchez began when the former produced both The Orphanage and The Impossible. She was perfectly aware of Sánchez’s untold talent as a filmmaker and knew she wanted to be part of his new project.

Marrowbone is Sergio G. Sánchez’s first feature film as a Director, following a successful career as a Scriptwriter. He made his debut with J.A. Bayona with the screenplay for The Orphanage, a film executive produced by Guillermo del Toro. It became a phenomenon when the film premiered at the Cannes Film Festival and was received with an impressive 10-minute ovation.

Of the seven Goya Awards presented to the film, one of them went to Sánchez for his script. After the warm welcome of their first feature film, Bayona and Sánchez changed the tone for their next film without leaving aside the themes they both love to share. Sánchez wrote the script of The Impossible, based on the shocking odyssey of a Spanish family that survived the 2004 tsunami in Southeast Asia.

The film, in which Bayona once again acted as director, not only was a box office success within the Spanish borders, but achieved a great international resonance reaching the figure of 180 million dollars box office worldwide, with an Oscar nomination to its leading actress, Naomi Watts, in the category of Best Actress.

Sánchez was also in charge of Jorge Torregrossa’s adaptation of The End and Palm Trees in the Snow by Fernando González Molina. Marrowbone is his first feature length film. His other directorial credits include short films such as 7337 and Low Season, as well as the TV movie The Pianist Hands.

The script for Marrowbone was built brick by brick.

Sánchez recalls the peculiar writing process: “I started developing it. There were different phases. During the first draft, I was sending Belén Atienza a few pages per day, not really knowing where the story was headed.”

Atienza adds: “It was like a novel delivered by installments. Each day you were discovering a little more about the characters and the story. We rounded everything up because it was a complex story with different time lines and several twists that had to fit together.” The idea of a novel in installments was intentional. Marrowbone has the presence of an independent world, filled with secrets that entice the audience and invite them to stay and live inside it.

Once Telecinco Cinema read Sánchez’s script, they surrendered to its great possibilities.

“We knew since the beginning that we had incredible material, marvelous,” says Ghislain Barrois, a producer at Telecinco Cinema. Like Belén Atienza, Telecinco Cinema supported Sánchez when he began his journey into filmmaking. Having known him as a screenwriter, they now had the chance to participate is his rite of passage as a director with a story they really liked. “It’s a combination of fantasy and terror and drama. One of those pieces you don’t see every day,” says Álvaro Augustin, a producer at Telecinco Cinema. After seeing Marrowbone on paper, they knew it wouldn’t be an ordinary film.

Sandra Hermida, Line Producer for The Orphanage and The Impossible, will be rejoining the team as Line producer and executive producer for Marrowbone. “It’s his first film but we don’t feel like he is a first time director,” says Hermida, as she explains how Sanchez managed to gather so much trust and affection while preparing his first feature.

This could be explained by looking into Sánchez’s career as a screenwriter. He has shown a high level of commitment on previous films and continues to stay involved beyond the writing process. The relationship that Sanchez and Bayona established while preparing their two films exceeded the usual bond between director and writer. They have developed a creative symbiosis. The two were fully responsible for the worlds they created. We can see a lot of their shared curiosities both in The Orphanage as well as in The Impossible. Sánchez also advised on several decisions, including casting and directing.

Sánchez comments on Jack’s problematic past: “He is a tortured character because he lives with anguish and emptiness in his memory and is constantly trying to close that hole. George MacKay, an actor of enormous prestige despite his youth, plays Jack. “Surely one of the most committed actors I’ve seen in my life,” concedes Sanchez. He gives a superlative performance that reveals the degree of commitment he has to the character.

Hermida affirms that it was unavoidable that Bayona would participate in Marrowbone. “They are two filmmakers that create a cinema, which is analogous and supplementary, with obsessions and themes alike,” she says.

Sánchez and Bayona fondly recall the moment they started working together in The Orphanage. They didn’t know each other well and were surprised to learn that they shared the same tastes in cinema. “In some way, the seed of our common cinephilia is a part of Marrowbone,” says Bayona. He was always 100% ready to commit to any project Sánchez decided to start, but truth be told, he was really blown away by the strength of Marrowbone’s script. He gave Sánchez advice, but always with respect, fully aware that the project and its needs were in the best possible hands. Bayona shared this creative wisdom throughout the different phases of the film. Once he read the script, he gave his notes and during the editing process, he shared his point of view.

What are the passions Sánchez and Bayona both share?

A great deal of it comes from their special interest in childhood, youth, and what happens when their characters dive into the deep and dark waters of adulthood. It’s no coincidence that Marrowbone’s main characters are four children who have not yet reached adulthood, similar to the themes of The Orphanage and The Impossible.

They both defend the importance of fiction as a medicine to cure deep wounds or even as a shelter from a hostile reality that people are not able to manage. Marrowbone tells the story of four orphan siblings who only have each other as they face the looming threat of a horrible past. While the siblings try to overcome their plight, they take shelter in an isolated house, which acts as a safe haven for their broken family.

“It’s a subtle approach to the genre, without tightening the screws.” said Bayona. It’s the kind of feature that is no longer done and does not require special effects or make up. Terror is at the story’s core and gradually consumes everything,” says the Catalonian director.

The House – An Essential Character

Beyond the five main characters played by real actors, there is another character that is essential to the Marrowbone story. It is the house where the siblings live, the miniature universe that frees and cages them at the same time.

One of the main conditions that Sánchez proposed, and that the rest of the team agreed with, was that the house had to be real, not a set. He pointed out that “it was essential that it creaked, breathed.” He was the one to propose Torre de Arango in Pravia as the main set.

Patrick Salvador, production designer and whose acclaimed work in Gabe Ibáñez’s Automata served as a cover letter to join the project, had the challenge of bringing a 17th-century Asturian stone palace to Maine. The house had to be adjusted both on its exterior façade and its interior morphology.

Among the requests that Sánchez had in mind, was that he did not want a house of terror, but something that felt more authentic, reflecting the emotional state of its inhabitants. In this sense, it was necessary to reinforce the appearance of a semi-abandoned place, in line with the vital circumstances of the siblings. The lawn was cut and allowed to grow for five months to convey this impression. Thus, the garden surrounding the house acquired an unkempt feel, closer to a jungle than to a tidy and prepared courtyard. It was to mark the boundary between the house and the rest of civilization. Our protagonists live in this world with their own rules, invisible to society which continues with its concerns on the other side.

All this was very easy to convey thanks to the house they chose, because it was totally isolated, with no signs of modern life around it (motorways, gas stations, etc), as if history had really run its course without it.

“The script already had the main elements; the photographic language was already included in it. There was an emotional dysfunction in the story. We constructed that contrast with the light of the film,” says Giménez. The relationship between Sánchez and Giménez was very fluid. They both agreed on the uses of light and color that best suited the story. Sánchez asked for everything to have an atmosphere of idealized memory. The photography captures the summer of your childhood that you will always remember and that you would want to return to, but that you know is gradually decaying.

As with the art direction, Sánchez was explicit in requesting that the photography didn’t go towards the common items of the genre. As Bayona points out, who worked with Giménez in the Penny Dreadful series, “the photography for Marrowbone is very naturalistic, nothing sensationalist. It is very interesting to approach the genre from that perspective.”

As for the light treatment, they went for natural light from the beginning. “We saw that there was a way of using natural light, that the plastic was as realistic as possible, making the characters move within spaces naturally and with a lot of freedom,” says Giménez.

Marrowbone’s staging was important. It was imperative for the light to act as an ally and support the actors’ performances. This detail was also based on the fact that the main location, the house, has electric power, but as a result of the abandonment is unused. In this way the use of natural light responded in an organic way to the needs of the script. As Patrick Salvador points out in reference to Xavi Giménez and the attitude with which he faced the lighting: “He is a very courageous director of photography, who is not afraid of the intensity, the chiaroscuro.”

“What’s difficult about this film is talking about it without revealing any of the details. The audience is going to find a very rich universe, full of nuances, with many turns and, above all, a lot of emotion. That is what we have put into the film and I hope it is what the viewer sees,” says Sánchez.