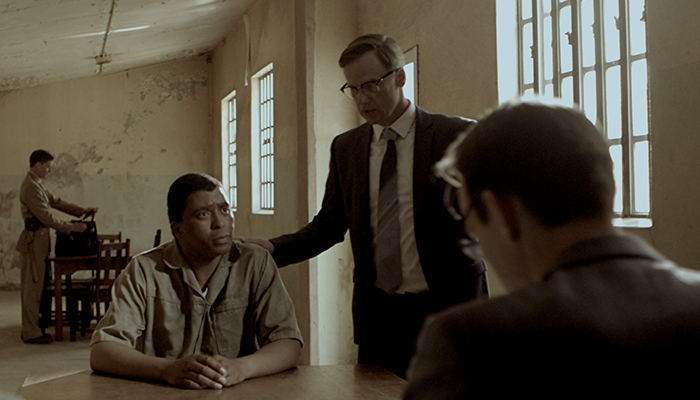 Sympathetic white Afrikaner lawyer Bram Fischer risks career and family to defend Nelson Mandela and his inner circle in An Act Of Defiance.

Based on Joel Joffe’s book ‘The State Vs. Nelson Mandela, the film is written and directed by Jean Van De Velde, ‘and won the “2017 Movies that Matter Film Festival – Audience Award” in the Hague, Netherlands.

This riveting drama is a co-production between South Africa and The Netherlands and expertly combines nail-biting political and courtroom intrigue to explore South Africa’s seminal struggle against racism, and the little-known Jewish figures who sought to end entrenched discrimination in their country.

It’s 1963 and apartheid is rampant in South Africa. When ten men are arrested on a farm in Rivonia for conspiring to commit sabotage and violent acts against the repressive South African government, tenacious lawyer Bram Fisher steps up to the challenge as lead counsel. He soon finds that political leader Nelson Mandela is also on trial.

Mandela urges his fellow defendants to plead not guilty and to shine a light on the systemic oppression of those classified as “non-white” under Apartheid. As the outcome of the trial looks bleak, Mandela gives his famous “I’m Prepared to Die” speech, in which he posits that the ANC’s resistance is justified given the repressive South African state. But will Mandela’s impassioned speech save these men’s lives?

Born in 1957 in Bukavu (in the former Belgian Congo), Jean van de Velde grew up in the tropics, went to secondary school in the Netherlands and graduated from school in 1974 in Utrecht, after which he studied at the Dutch Film Academy in Amsterdam.

In 1985, Jean founded his own company and wrote and directed a large number of successful features for several producers including the award-winning ‘Leak’ and ‘All Stars’, the feature film and TV series (winner of the Interna>onal Emmy Award 2000) both being remade in many countries, among them the UK, Spain, Italy, Germany and Belgium.

Ahmed Kathrada, one of ten ‘terrorists’ imprisoned with Nelson Mandela and sentenced to life, sang to me in fluent Afrikaans in an almost empty restaurant on a Saturday afernoon in Johannesburg shortly before his passing.

As one of the two Rivonia trialists then still alive, I had visited him in early June to hear as much detail and background as possible about that historical process in 1963/64, about his fellow trialists and about Bram Fischer, the lawyer who led the team and had to save them from the death penalty.

What did you do in the last days and evenings in your cell before Judge de Wet’s sentence, I asked?

“I sang songs, children’s songs. In Dutch. The language of my youth. It is such a beautiful language.”

It was one of the many impressive encounters I’ve had since I started writing, rewriting and preparing ‘An Act of Defiance’ more than three years ago. At 34, Kathrada was the youngest of the convicts, and he told me what Denis Goldberg and co-lawyer of Bram Fischer, George Bizos, had already told me.

From the moment the arrested prisoners first saw each other and the previously arrested Mandela, they decided three things in a few minutes: “we take responsibility for what we have done, we accept every punishment, including the death penalty, and we are not going to appeal. Let us be defiant!”

In 1963/1964, I was 7 years old and growing up in another part of Africa, the Belgian Congo. We thought very little of apartheid. It was unknown to us. In the Congo there were no signs for “whites only.” Amongst us, black people were allowed to swim in the same swimming pool.

After my films ‘Silent Army’ and ‘The Price Of Sugar’, I was given a script, for which producer Richard Claus, had acquired the rights. The script was based on a book written by a member of the defence legal team, lawyer, Joel Joffe, titled The State Versus Nelson Mandela.

I was immediately interested in the defence of Nelson Mandela and the trialists. It was a new genre for me, a courtroom drama, and it would be a unique look at a process that could have ignited a civil war and the violent overthrow of an oppressive regime as had happened in many other African countries, such as the Congo.

Although it was interesting, the book and the original script were confined to the courtroom some>mes the narrative became bogged down by technical legal terms.

To learn more, I read countless books and many well-documented internet sites on South African history.

One character came to the forefront everytime: Bram Fischer, the leader of the legal team, Dean of the Order of Lawyers, ‘Crown Prince’ of a renowned Afrikaans family with a father and grandparents who had held high-level government posts in what was then called the Orange Free State. Bram was a gifted rugby player who played against New Zealand’s All Blacks – a big deal in South Africa.

Bram Fischer was a successful lawyer specialising in mining and land affairs, living in a large house, with three growing children, happily married to a strong and smart woman and secretly, president of the banned South African Communist Party (SACP), and closely involved in the ANC and in many underground activities aimed at overthrowing the white apartheid government and creating a society in which black and white people would be equals. He was leading a double life.

With that in mind, I rewrote the script and had many meetings with Ahmed Kathrada, George Bizos, the still-living daughters of Bram Fischer Ruth and Ilse Fischer, the Bernstein children, and many others. I heard details and observations about the man, his family, the process, life in South Africa in those dark days, the Secret Police – details, and observations of which only some ended up in the film. In all honesty, all ‘trialists’ and their lawyers deserve their own movie. Their degree of enthusiasm, fear, daring, surrender, sacrifice, courage, and idealism was unprecedented.

Not to mentioon the cast extra I met before the shoot for the waterboarding scene set in 1963 (the South African police had just learned this method from the French police in Algeria during a work visit).

I was looking for an old, fragile man. I explained to him the scene, what I expected of him and said something awkward like “Do you not mind doing such a thing?” He looked at me and smiled. He told me that in the 1970s he had been locked in the feared Victor Verster prison for seven years because of his political activities. That’s what he was used to. “Seven years long and not one day was I not beaten or kicked. I entered the prison with a mouthful of strong teeth. They were all beaten out. ” He smiled again. Apart from two, I thought, when I saw two remaining stumps in his mouth. He explained that most of his friends had fled, but he always had the belief that “we would win.” “And it’s my country. I’m not leaving. I belong here. ” His name is Moses Raphalanyana and he too should star in a movie.

Whenever possible, I tried to stay close to the authenticity of the subject, in language, in casting, in locations. We were able to shoot in Pretoria’s courtroom where the process actually took place 50 years ago, and in the cells where the prisoners were detained during the trial.

We were the first filmmakers to cast a South African actor to play Nelson Mandela in a feature film. Bram’s Mercedes, the batons, the copier, the documents, the maps, everything about the apartheid era was brought back to life in all the details of the art direction.

A big challenge in that quest for authenticity was for the only Dutch actor in the movie Peter Paul Muller to learn to speak Afrikaans and Afrikaans-English. I’ve shot two All Stars movies and a series with Peter Paul. His comedy timing is well-known to me. But I used to see him on the stage often enough to know that there is also a beautiful serene seriousness in him.

From day one, he was at the top of my list, and when we were certain about the funding, I asked him at the beginning of last year whether he wanted to play the role of Bram Fischer with only one condition – that he learnt to speak the language. He accepted and worked with three dialogue coaches: first in the Netherlands, and later he came to Johannesburg and practiced for weeks endlessly, and then daily during the shooting of the film.

At the start of the shoot, I made a speech for the crew. We all stand on the shoulders of these heroes who came before us and who gave their hearts, their souls, their salvation and, in many cases, their lives for our freedom and equality. I am happy I was able to make the film ‘An Act of Defiance’.