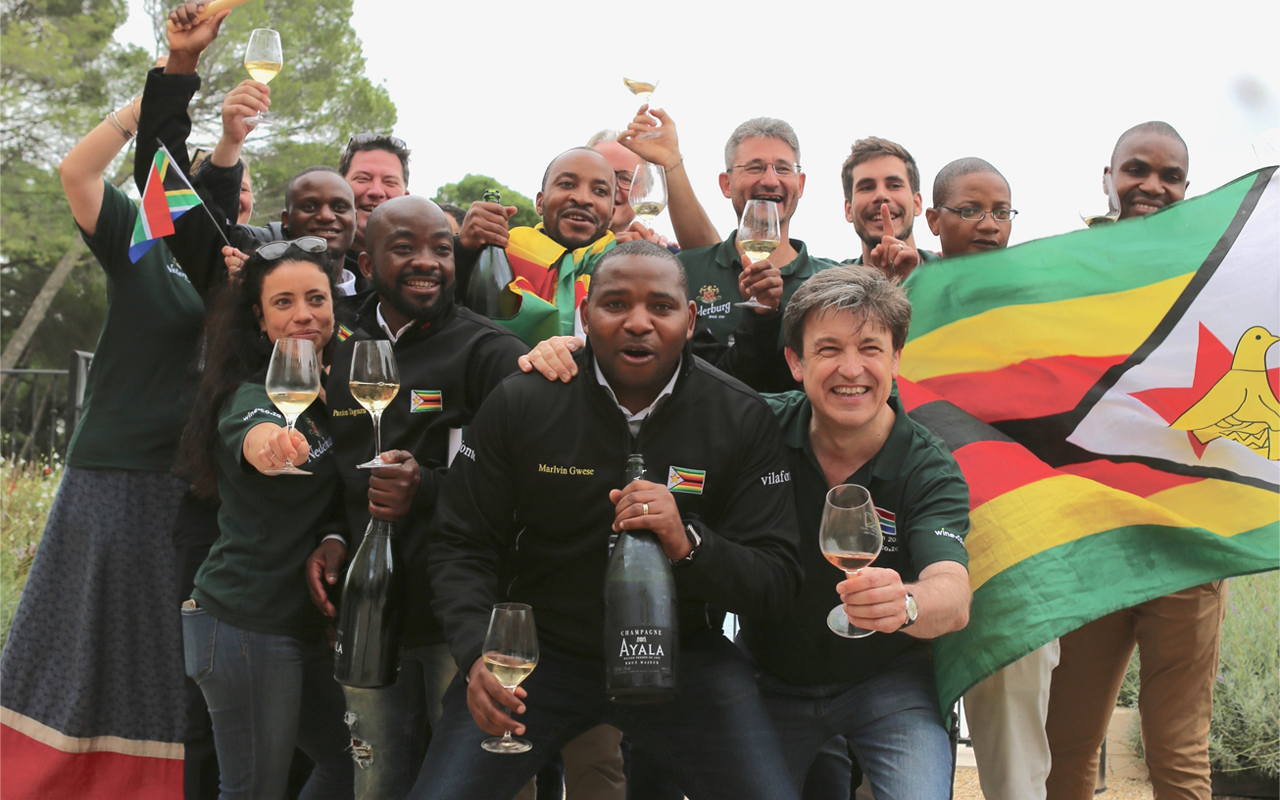 When Jancis Robinson, one of the world’s foremost wine authorities, alerted Australian producers, directors and writers Warwick Ross and Rob Coe to the extraordinary rise of four Zimbabwean refugees who were fast becoming South Africa’s top sommeliers, they were immediately drawn to their unique story.

“We were immediately drawn to their story. Having made the feature documentary Red Obsession four years
earlier, we knew the wine establishment to be Europe-centric, exclusive and overwhelmingly white,” says Warwick Ross & Rob Coe

Meet Tinashe, Pardon, Joseph and Marlvin: the world’s unlikeliest sommeliers. Just 10 years ago these Zimbabwean men faced destitution as inflation crippled their homeland. With no job prospects under Robert Mugabe’s brutal regime, and unable to feed their young families, they each made a harrowing decision: to leave their home and everything they’d ever known, and use their last pennies to be smuggled across the border into South Africa.

But South Africa was just another battleground. Tinashe, Pardon, Joseph and Marlvin weren’t the only ones fleeing their home country – millions of Zimbabwean refugees poured into Johannesburg seeking work. The local residents resented this influx of illegal immigrants, and soon Zimbabweans were the targets of anti-foreigner riots. With nothing but the clothes on their backs, and maligned by their new community, our protagonists slept on the floor of a local church as they searched for work: grave digging, worm farming, labouring – anything they could get.

Having escaped starvation and tyranny in their homeland of Zimbabwe, four refugees have conquered the odds to become South Africa’s top sommeliers. Driven by relentless optimism, a passion for their craft and unshakeable national pride, they form Zimbabwe’s first ever wine tasting team and set their sights on the coveted title of ‘World Wine Tasting Champions’. From the moment they arrive in France to compete, this team of mavericks turns an establishment of privilege and tradition on its head. A truly uplifting documentary that celebrates just how irrepressible the human spirit can be.

Zimbabwe is a country with next to no wine production or wine consumption. So how was it that these four men, who had never even tasted wine before escaping from Robert Mugabe’s brutal regime, were now the head sommeliers at the four best restaurants in Cape Town?

Even more remarkable was that they were in the process of forming a team to compete against 24 other countries at the WORLD WINE TASTING CHAMPIONSHIPS in France. The first black team ever to do so. Team Zimbabwe.

What would it take for them to compete at the highest level of the game? How could they believe they even had a chance? The odds against success would be overwhelming. Would the wine world take them seriously?

We felt compelled to discover more about their journey and what drove them. It would be an opportunity to follow J Tinashe, Pardon, Joseph and Marlvin on their quest against great odds, and to tell a story that could shed light on the lives of refugees, the challenges they face in their new communities, and what “home” means to someone who has been driven out of their country of birth. And we felt strongly their story spoke to the wider quest to break down barriers and bridge cultural and racial divides.

We discovered that the success and recognition that they had earned in South Africa was the result of their relentless optimism and their fierce determination to make a better life for themselves and their families.

What moved us about our four protagonists’ ambition to compete on the world stage was the abiding love they each have for Zimbabwe. Despite the deprivations they had suffered, the competition would be a platform to show the world the untapped potential of their mother country.

They expressed their determination to use this spotlight to inspire young Zimbabweans who had been living under such a repressive regime. This was much more than the story of a competition – This was a story of hope and change.

Warwick was born in Hong Kong in 1955 and moved to Australia in 1965. After graduating from the University of Melbourne, he attended film school at the University of Southern California. He started his career on Columbia Pictures’ THE BLUE LAGOON and went on to work on Australian feature films ROADGAMES and THE RETURN OF CAPTAIN INVINCIBLE.

In 1988 he joined the team of Yahoo Serious, David Roach and Lulu Serious to produce YOUNG EINSTEIN. A
critical and box office hit, it was the most successful film ever released by Warner Bros in Australia and went
on to achieve the number one box office position in France, Germany and the UK.

Warwick most recently produced, directed and wrote the feature documentary RED OBSESSION, narrated
by Russell Crowe. The film premiered at the Berlin Film Festival in 2013, screened in competition at the
Tribeca Film Festival, and won two AACTA Awards – “Best Feature Length Documentary” and “Best
Direction in a Documentary” – in 2014.

He is also a recipient of the 2013 Australian Writer’s Guild Award for RED OBSESSION.

Rob is a Sydney based producer, writer and director. He joined Lion Rock Films as Executive Producer of the
feature documentary RED OBSESSION narrated by Russell Crowe. The film, released in 2013 by Village
Roadshow, won the AACTA Award for Best Feature Documentary. The film also screened at Berlin, Tribeca,
Seattle, Sydney, Melbourne and Busan Film Festivals.

Paul is a film editor and animator who has worked on a wide range of projects, including feature films,
documentaries, broadcast news, commercials and music videos. To all his projects, he brings strong creative
ideas, technical expertise and an emphasis on narrative.

In 2013, he edited the feature documentary RED OBSESSION narrated by Russell Crowe, which won the
AACTA award (Australian Academy of Cinema and Television Arts) for Best Feature Documentary and
screened at Berlin, Tribeca and Sydney Film Festivals.

“This beautifully shot and constructed film…editor Paul Murphy must take a lot of credit for this revelatory
account.” Margaret Pomeranz, At The Movies.

He edited the sports documentary AUSSIE RULES THE WORLD in 2014, narrated by David Wenham, and the
feature film BEAST in 2015, which premiered at the Toronto Film Festival and starred Garret Dillahunt and
Angeli Bayani.

Paul’s current projects also include directing the feature documentary THE MUSIC MADE THEM DO IT about
the rift between a rock band in the 1980s and the conservative Christian group who protested their shows, as
well as writing ‘The John Todd Tapes’, an audio podcast about a collection of mysterious tape recordings
from the 1970s.

Madeleine is an Australian screenwriter and journalist. Her reporting has been featured in The Guardian, The
South China Morning Post and Asia Tatler, where she worked as Features Editor covering the arts, travel,
wine and the environment. She has also held roles at FremantleMedia Australia and The Sydney Festival.

Madeleine was a Creative Consultant on AACTA award-winning feature documentary RED OBSESSION,
narrated by Russell Crowe, and most recently co-wrote feature documentary BLIND AMBITION, which
follows four Zimbabwean refugees as they take on the world’s best sommeliers at the World Wine Tasting
Championships. She holds a Bachelor of Arts degree from the University of Sydney