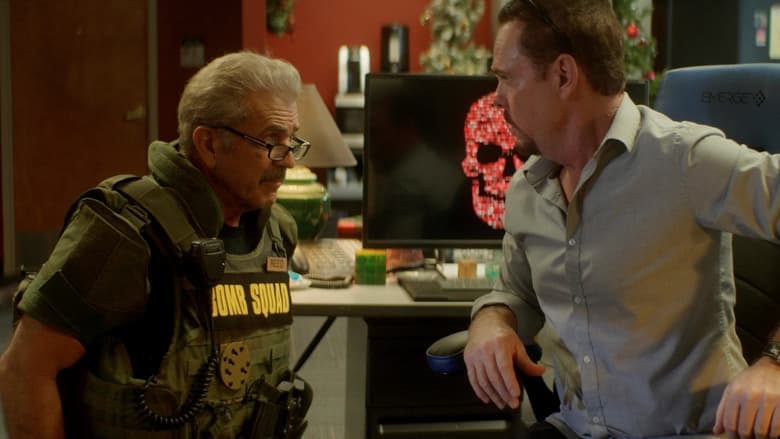 Director James Cullen Bressack’s Hot Seat takes place in a setting too familiar for comfort, as characters reveal hidden secrets and navigate tough choices in order to survive the day.

Orlando Friar is a former hacker with a checkered past who has repositioned himself on the straight and narrow path before he ends up in the Hot Seat. Trying desperately to rebuild his life, he’s landed a minimum wage cyber security job that pays the bills and keeps him mostly out of trouble. At the same time, he’s working to improve his rocky relationship with his wife and be a better father to his young daughter, who’s about to celebrate her birthday. But as hard as Orlando may try to run, the past tends to catch up with everyone…

Played by Kevin Dillon (known for his roles in The Blob, Platoon, The Doors, A Midnight Clear, and No Escape as well as his portrayal of Johnny “Drama” Chase in the long-running HBO series Entourage), Orlando is both a bad boy and an everyman: He’s someone who made mistakes in the past but wants to move on and become a better person for the people he loves. He hasn’t completely overcome the flaws that led to his current situation, but he’s trying to change.

That’s where we meet our relatable, heavily-flawed hero.

Dillon was initially drawn to the script crafted by Leon Langford and Colin Watts because of Orlando’s character.

“This movie was a lot different than your average movie, for me in particular,” says Dillon, “because my character was stuck in one room with a bomb under his seat. I’m playing most of it in front of a computer in front of these cameras, where the bad guy can see me but I can’t see him.”

Inspired by the challenge of filming nearly the entire film in such limited space, Dillon rose to the occasion, showcasing a gripping emotional range and dexterity. “Orlando is a super cocky computer hacker, and he was the best. The best in the world,” says Dillon. “And he finds himself in a situation where he’s lost all control and doesn’t know how to get out of the situation. But being that Orlando’s a smart guy, he figures a way out.”

Orlando frantically works to extract himself from the situation without triggering a massive explosion, while behind the scenes, a bomb squad led by wise, veteran leader Wallace (played by legendary actor and director Mel Gibson) gathers to diffuse the situation. Wallace, along with backup support from his assistant Jackson (Eddie Steeples, My Name Is Earl, Raising Hope, Jiu Jitsu, The Guest Book), cautiously approaches the scene, navigating an intricate maze of bombs along the way.

Bressack finds a way to hone in and amplify the film’s most compelling scenes. “He has the vantage point of not only being a master craftsman as a filmmaker, but a real fan of movies,” says Welch. “And if anything ever seems like it’s boring or lagging or things that he would complain about as a viewer, he’s able to recognize that on the spot and fix it right then and there. Not a lot of directors have that ability, I’ll be honest.”

A coworker and the perfect foil to Orlando’s goal-oriented spirit, Welch’s character Enzo both is and isn’t what he seems. “He’s kind of a lovable ne’er-do-well,” says Welch. “I think he kind of reminds Orlando of how he used to be in his past: Not a care in the world. Shows up to work late all the time. Really doesn’t seem to take life too seriously.” Enzo’s attitude forms a compelling contrast with Orlando’s more serious, focused approach to getting his life together. “Unfortunately for Enzo, he gets caught up in all Orlando’s nonsense and has to go along for the journey.”

Tides change: It’s Orlando’s turn in the hot seat. To the outside world, Orlando is set up to look like the perpetrator of the threat: a pawn in a carefully orchestrated, insanely-high-stakes game of chess culminating in a final life-or-death job. It’s Orlando’s turn in the hot seat. He must face his own past sins and outsmart the meticulous bomber before he, and half the city, go up in smoke.

Part of what makes the film tense is its relatable modernity. “It’s an action-adventure movie, and it’s very suspenseful from start to finish, but it’s also very contained,” says Welch, who sees the digital aspect of the movie’s plot as an invitation to update the genre. “It’s very relevant to the world we’re living in now while playing into old classic action-adventure themes that are timeless and have worked for a hundred years.”

Throughout the film, hidden secrets come to light as the intense day unfolds, hour by hour.

Orlando’s co-worker Enzo, for example, is also haunted by his past, which is revealed as the events of the day unfold. Welch, who plays Enzo, brings a charming slipperiness to the role.

He’s a familiar kind of guy until he isn’t. “He’s a little bit of a likeable sleazeball,” says Welch.

“I feel like everybody has a friend like this, where we don’t totally approve of the way that he lives his life. He’s kinda always looking for an angle. But you also can’t help but love the guy, because he seems harmless.” Enzo’s case, perhaps, is not so harmless after all.

“All the characters have a lot of things going on that you don’t know about,” says Dillon, “and as the plot unfolds, you find out more and more about these characters—some good, some bad.”

The bomb squad, who have been working deftly to reach Orlando in his cubicle, finally manage to outwit the bomber–only to realize that there’s a much bigger, more sinister scheme unfolding.

Things are not as they first appeared. They’ll have to collaborate to put together the pieces, risking their own lives in the hopes of stopping a madman from enacting violent revenge.

American producer, director, and screenwriter James Cullen Bressack received critical attention at the age of eighteen from audiences and critics alike for his debut feature, My Pure Joy. With a knack for pushing boundaries, James followed up his debut with the bold, unapologetic Hate Crime, forcing audiences to bear witness to a brutal home invasion. The first found-footage feature ever made without any cuts, the entire film plays out in painfully real-time. Hate Crime was immediately banned in the U.K. for its fearless, frank storytelling and remains so to this day—one of only three films banned in the last 25 years. Ahead of his time, he next embarked on To Jennifer, the first feature film to be shot entirely on the iPhone 5, which led to a series for which Bressack produced three follow-up instalments. He completed seven more feature films, including Pernicious, 13-13-13, and Blood Lake. After writing and directing the haunting Bethany in 2017, Bressack shifted his focus to producing. He has now produced forty-eight features. His 2019 directorial feature, Beyond The Law, was followed by punk rock icon Glenn Danzig of the Misfits, and he directed legendary action-hero Bruce Willis in the thriller Survive the Game. Bressack recently launched his Production Company, Sandaled Kid Productions, with a focus on working with and supporting new, exciting filmmakers.

Originally from Virginia, writer Leon Langford has a penchant for powerhouse genre work. His writing fuses multi-layered characters to create rich, impactful stories. Most recently, Leon was staffed on Facebook Watch’s KONTACT, starring Andrew Bachelor (King Bach). He also has his voodoo-cop pilot, Blackcraft, set up at Automatik and a biographical miniseries in development with Maven Screen Media. He also wrote Backlash which is currently in development at Voltage Pictures.

Collin Watts is a Los Angeles-based screenwriter focused on creating genre films with genuine heart. Originally from Illinois, Watts is a graduate of Florida State University as well as UCLA’s professional screenwriting program. With Leon Langford, Watts co-wrote and produced This Land, a topical horror film that crosses the political divide. His new action-thriller, titled 1st Gen, is currently in development.