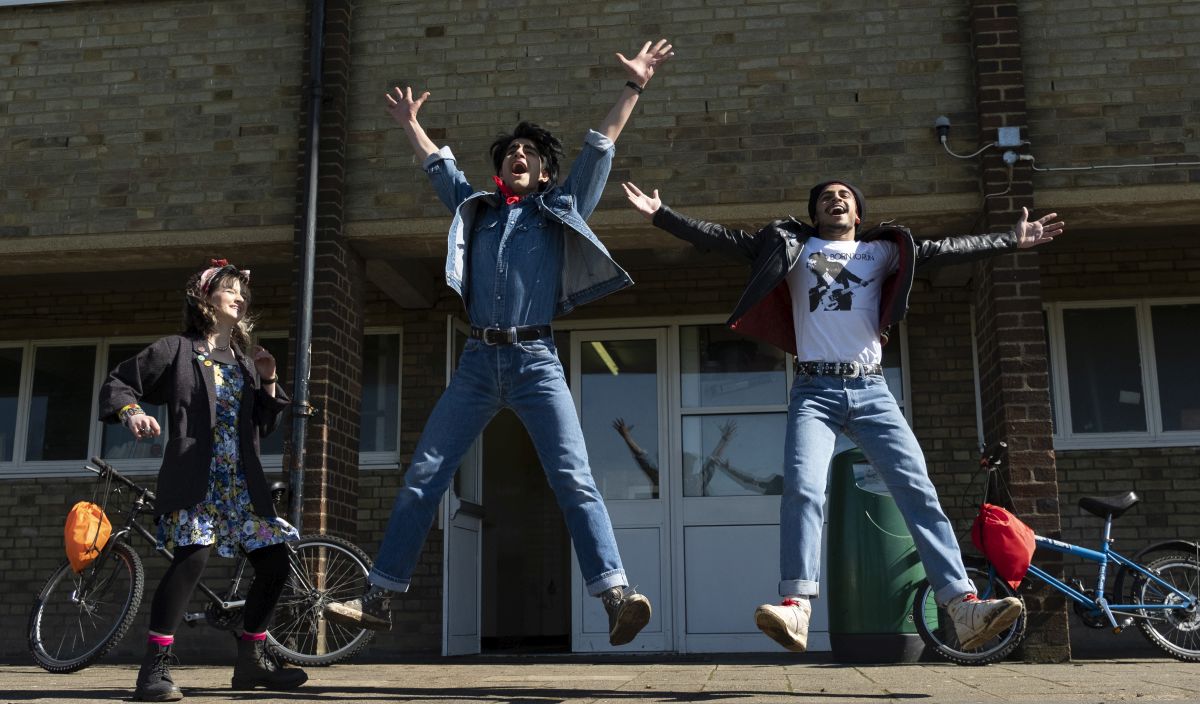 The heart-warming and truly inspirational comedy drama Blinded By The Light’s journey to the screen began in earnest back in 2010 when visionary writer-director-producer Gurinder Chadha and author-journalist Sarfraz Manzoor attended the BFI premiere of The Promise, a film charting the making of the 1978 Bruce Springsteen album Darkness on the Edge of Town.

Developed from Gurinder Chadha and British Journalist Sarfraz Manzoor’s shared passion for Bruce Springsteen and based on Manzoor’s celebrated rite of passage memoir Greetings from Bury Park, chronicles his experiences as a British Muslim boy growing up in 1980s Luton and the impact Springsteen’s lyrics had on him.

Manzoor credited albums like Born to Run and Greetings From Asbury Park, NJ with changing his life during some typically angst-ridden teenage years, and went on to deploy his passion for Springsteen as the backbone of his 2008 memoir, Greetings from Bury Park, which traced his upbringing during the 1980s in Luton, his dreams of becoming a writer and his complex relationship with his father, while also exploring the power of music to transcend race and religion.

Chadha discovered ‘Born to Run’ while at school working at a record store on Saturdays. “I loved the symbolism of the cover with a black and white man appearing to be so close and having fun at a time when Britain was riddled with riots as black and white youth challenged nationalism and the Right wing here.”

Chadha read Manzoor’s book and loved it. She was invited to the premiere of the Promise and invited Sarfraz along. “ There on the red carpet an amazing thing happened. We were both poised with our cameras ready to snap pictures of Bruce as he passed us but Bruce stopped and turned to Sarfraz to say ‘Your book was really beautiful.’ Sarfraz almost collapsed. Bruce said “Someone sent him a copy and he loved it.”

Chadha adds, “Sarfraz was just blown away. Then I jumped in and said, ‘I’m Gurinder Chadha, the filmmaker, and we really want to make this into a film, but we need your support, Bruce.’ And he said, ‘Sounds good, speak to Jon”. ’ He pointed to Jon Landau, his long-time manager, along with Barbara Carr and Tracy Nurse, and from there we kept in touch.”

Turning Manzoor’s memoir into a narrative for film

The pair had Springsteen’s blessing but faced the complex challenge of turning Manzoor’s memoir into a narrative that would suit the screen. The title on which they settled, Blinded By The Light,  is taken from the opening track of the same name, which appears on Greetings From Asbury Park, NJ (1973).

Chadha, an award-winning screenplay writer knew this was going be a tough challenge but had won kudos with an earlier rites of passage movie ‘Bend it like Beckham’. Chadha says, “Sarfraz was a journalist but had not written for the screen, he really wanted to have a go so I gave him several one on one tutorials in my house and the screenplay process began”

Manzoor tackled the first draft of a screenplay and says that he found inspiration in the film adaptation of An Education. “I could see that maybe our story would be about an outsider changing someone at a decisive moment, at 16 or 17 years old,” he says.

He then worked closely with Chadha and her writing partner Paul Mayeda Berges from Viceroy’s House, Bend It Like Beckham, Bride & Prejudice, Angus, Thongs And Perfect Snogging. “In the book Sarfraz was doing that thing we do as Asians where, if we’re writing about ourselves, we want to protect ourselves and protect our community against stereotypes and any damaging preconditions that people might have,” explains Chadha.

“In the book I found that he often stayed away from getting to the real nubs of disagreement with his father or with members of his community, which was totally understandable. So, my job was always to push him and to try and get closer to the truth because drama is conflict.”

After Manzoor had finished his draft, Chadha and Mayeda Berges took over the script full time, bringing their technical expertise and deep understanding of how to carry a story to the screen. While working on their drafts, the screenwriters pulled more and more of Springsteen’s lyrics into their narrative.

“Bruce’s lyrics are very much part of our screenplay,” says Chadha, “and we use his songs in a great narrative way. It’s not at all, ‘Oh, here’s a great hit, let’s put this song here, let’s put that song there,’ it’s not a jukebox film. The song’s lyrics drive the narrative somewhat.”

Indeed, the central character Javed, based on Manzoor, finds a deep connection to the lyrics, and the filmmakers were able to draw parallels between what they wanted to say about Luton in the 1980s and what Springsteen was saying about New Jersey during a similar period.

“A lot of our script is about what it was that was inspiring Bruce to write those words, and how that inspiration was also something that Javed could draw on in a time of common experience,” says Chadha.

As she and her writing partner worked and reworked the script, Springsteen’s inspirational music came even further to the fore. While some lyrics are worked into the script and used as spoken words, a few tracks even spring to life as musical numbers, as montages or occasional set-pieces.

The filmmakers wanted the songs to feel organic and therefore did not employ any professional singers or dancers in their cast. Producer Jane Barclay explains, “The idea of the ‘hybrid musical’ evolved over time, though the music was always key, as was the use of Bruce’s lyrics to drive the narrative. The songs were worked into the script very cleverly. Gurinder is skilled at bringing just the right emotion and truth to a scene so was really able to work the lyrics in with just the right tone and narrative beats.

Chadha insists “The film is not a musical but a film with music, rooted in reality where you hear the cast singing along to songs but not as professional singers- more like their characters would.”

Barclay cites the first multi-character musical set-piece, a rendition of Thunder Road by a group of market traders. “Here we have the fantastic Rob Brydon, who is a huge Bruce Springsteen fanatic and has a wonderful voice. But we purposefully didn’t get in dancers for this scene. The other traders just pick up leeks and carrots as they move. It needed to feel real and organic with minimal choreography. We brought in professional movement experts but not actual dancers.”

Chadha brought on Bruce Springsteen’s long time marketing and PR  consultant, Tracy Nurse, to ensure Springsteen and his management team were kept abreast of the creative process including the script and the use of his songs and lyrics.  “I think he really appreciated how Gurinder had used the meaning of his lyrics to drive the narrative,” she says.

One prime example comes during Javed’s Springsteen spectacular and dramatic epiphany. It unfolds during a famous October night in Britain during 1987 when the Great Storm, a violent extratropical cyclone, caused chaos nationwide.

“We chose that night and it is there that we find Javed, who has hit rock bottom,” explains Chadha. “His life is going nowhere. He’s been attacked by skinheads. His father’s lost his job and he can’t see a future. But his friend, Roops, has slipped him a cassette into his bag. He puts it in and for the first time he hears the Springsteen track Dancing in the Dark.”

I get up in the evening

Man I’m just tired and bored with myself Hey there baby, I could use just a little help

“The words suddenly give him meaning to his life. And then he plays another track, Promised Land, and that guides him and cajoles him to get away from all the memories that bring him down. It tells him to forget about what it is that holds him back and instead think about what can take him forward. You have to believe in a ‘promised land’ because life is shit otherwise.”

If I could take one moment into my hands Mister I ain’t a boy, no I’m a man

And I believe in a promised land

It proved a highly dramatic moment during the shoot, and the filmmakers recreated the storm with wind machines, bursts of electricity and lightning.

“We had the full works and we tried to do something different with that scene,” says Chadha, “having projections of storms from archive footage projected against the buildings along with the Bruce’s words that had real resonance for Javed as he walks past them.”

Although the Springsteen songs that feature in the movie were written in the 70s and 80s, they remain timeless. The filmmakers firmly believe that while their narrative unfolds in 1987, the piece feels contemporary. “You’d only know it was 1987 because of some of the references, and the hair,” smiles Chadha.

“In terms of what it is saying about young people trying to find their path when the economy isn’t as strong as it could be, and the way young people have to challenge society’s expectations of them, I think there are great parallels with today.”