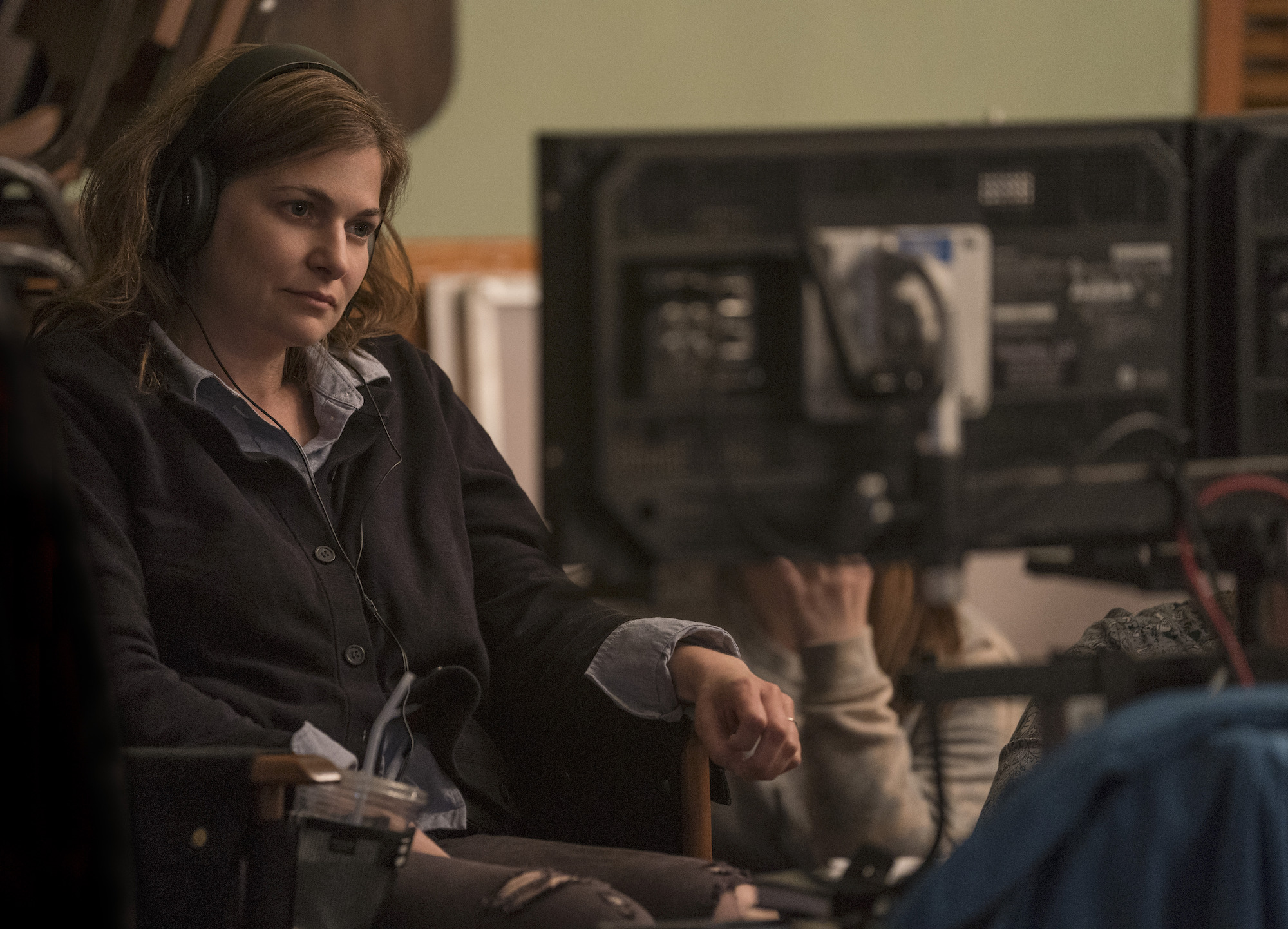 Following her Oscar-nominated turn as a screenwriter on the acclaimed Straight Outta Compton, writer/director Andrea Berloff makes her directorial debut with The Kitchen, based on the comic book series created for DC Vertigo by Ollie Masters and Ming Doyle.

There must have been something really compelling about this project for you to not only commit to writing it, but also taking it on as your directorial debut.

The comic book series was sent to me in February 2016.  I was at a place where I felt like, honestly, I’ve had a lovely career and I’ve been blessed with a lot of great projects and opportunities, and I’m so grateful for all of the work I’ve gotten, but I maybe I’m done achieving what I’m going to achieve. I thought, this might be it.  This might be the pinnacle.  So, I was in a frustrated place of wondering, “What else can I hope to achieve?”  And this specific story came around at a time when I was asking myself those kinds of questions in a very acute way.  So I took all of that energy and all of those questions and put them into this screenplay.

What were some of the challenges in bringing this world to the screen?

What was really challenging?  All of it.  The location work was especially complicated because so much of New York City is now gentrified and a lot of the period material is gone.  It was really important to me and to my creative team that we were as authentic as possible so we had to spend a lot of time and energy in (A), finding locations that could believably be made to look like 1978 and then (B), dressing those sets, physically and with visual effects. That commitment was a guiding principle from the very beginning.

These women are in an extreme situation, doing extreme things.  What makes them relatable?

What makes them relatable is that they start off in a place that I think everybody can understand, which is being in a situation where they aren’t being given the respect and the opportunity that they need and want.  And I think everybody in the world knows what that feels like.

Were there moments in your own life where you had to take charge because nobody else would?  Did you draw on those moments?

Don’t we all?  I mean, whether it’s writing and directing a big Hollywood movie or whether it’s getting my dog to cooperate.  (LAUGHS) You know?  We’ve all had these moments where it’s, “How do I make this moment work in the way that I want to?”  And I hope people can tap into that feeling.

So many of these characters go through a similar thought process.

That’s right.  And I think it’s really relatable for a lot of us.  What this movie is about is these women saying what they want and then going out and taking what they want – obviously in a very dramatic way, not necessarily the way that I would do it or someone else would do it, but in a very dramatic way that’s their own.  Just being able to articulate, “Here’s what I want out of life,” is really powerful, and that’s half the battle sometimes, saying that loudly so that people can hear it.  For me, it was, “I want to be a director,” and being able to say that out loud and not be shy about it because that’s what I wanted.  It was hard to say that at first, especially prior to the #MeToo movement.  And I think a lot of that, like figuring out what you want to say and then figuring out how to get it, were the questions I was struggling with at the time.

Do you feel audiences will be transported to a place and a time?

That’s the hope.  Because I think in many ways these period pieces—and Straight Outta Compton was a period piece too—allow us to reflect on where we are right now.  1978 was in many ways the heart of the women’s movement, so it’s not accidental that this movie lives there in a way, at the forefront.  In 1978 it was easy for certain people to dismiss the women’s movement and women more readily.  I think now it’s not culturally acceptable to do that, but I think there are some people who still don’t respect it.  I hope that by looking at it through the lens of the ‘70s it allows us a different perspective.

How important was it that these characters are seen as real individuals?

To me that was everything.  I wasn’t interested in casting three plastic mannequins; I wanted people who felt like us, people who felt like me, that I could connect to.  I want people to see themselves on that screen and to be able to ask themselves, “What would I do in that situation?” Also, “Where’s my voice?  What do I want?  What box have I been put into?  What stereotype do people make of me?”  And I think in order to do that, you’ve got to be able to see yourself onscreen.

In this case, it’s three women who are portraying roles they don’t often get a chance to portray: Melissa McCarthy, Tiffany Haddish and Elisabeth Moss as gangsters.  But one of the things I’m excited about is that audiences are going to see all of these actresses in ways they’ve never seen them before. They are fierce and strong and independent and beautiful and brilliant and all of that comes across on the screen.

What will bring men and women into the theatre to see this movie?

What were you looking for in casting the male roles?

I had to have really good actors in those roles.  When I think about the three husbands cast next to the three leading women, they’re all just incredibly talented and skilled actors with long, deep resumes: Brian d’Arcy James, James Badge Dale and Jeremy Bobb.  I needed great actors, and I also needed people who were game to go on this ride and to understand that this is a story about these three women and as important as those roles are, they’re supporting roles. So I cast those incredible guys, and also Domhnall Gleason and Common and Bill Camp, who are incredibly strong, talented actors who bring a lot to the movie.

Was there anything about the late 1970s wardrobe you and the cast loved—or, conversely, something you’d be happy to never see again?

I think the ladies are pretty clear that polyester is not very forgiving.  Not a lot of stretch, and it doesn’t breathe.  It’s hard to film in the middle of the summer in polyester on the street.  (LAUGHS) Sarah Edwards, the costume designer, and I were very clear that we wanted clothes that were authentically ‘70s but that look cool to our modern eyes. Some of the ‘70s clothes can look a little silly to us today.  Sarah was also the costume designer for Ocean’s 8, and she has an incredibly sharp curatorial eye.  She had such a great talent for putting together the look of our 1970s setting.  The styles look amazing.  I love the lapels.