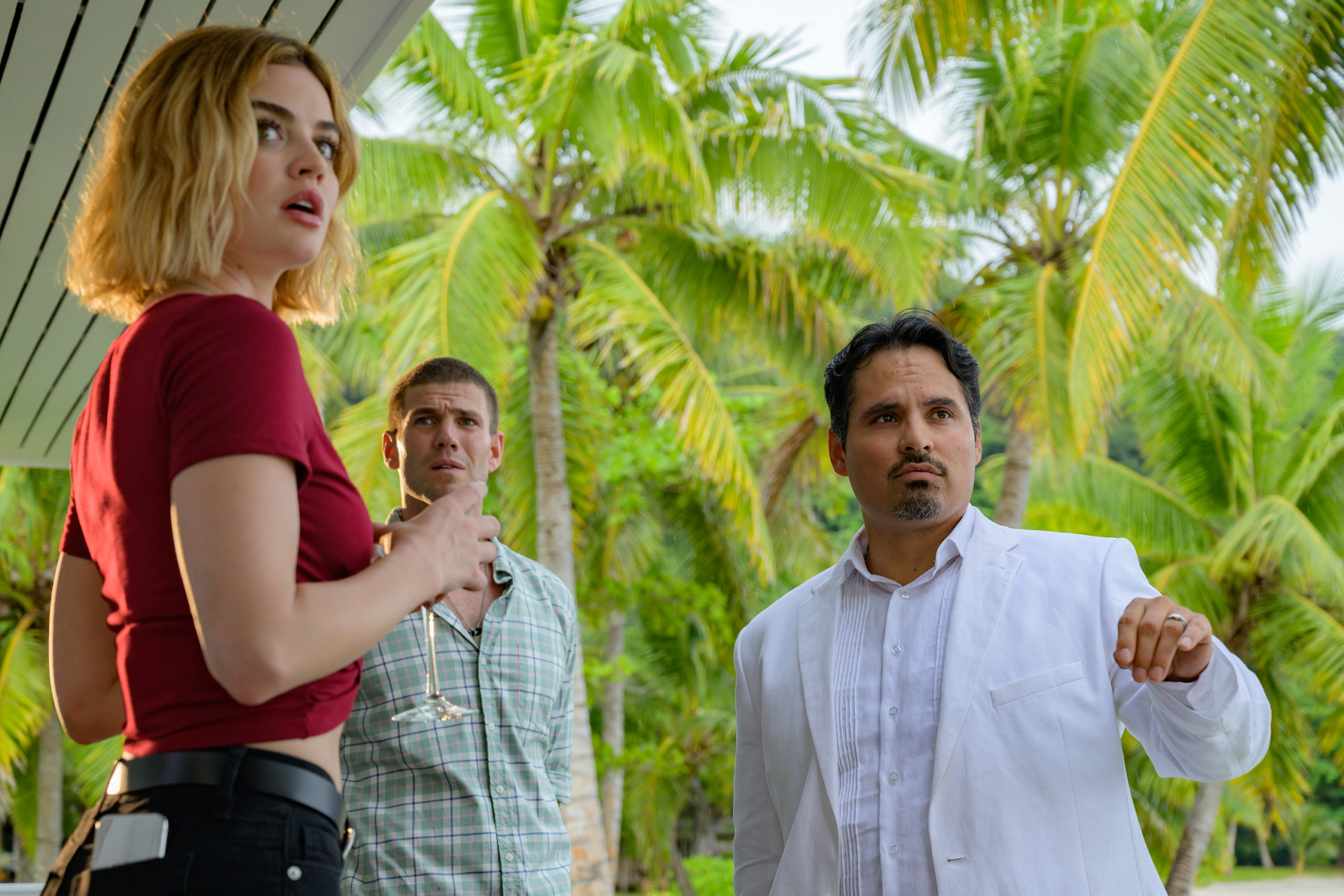 For writer-director Jeff Wadlow, Blumhouse’s Fantasy Island represented a natural fit with the Blumhouse model because right in its conceit are the core tenets of storytelling.

“You want the plot to illuminate character, and this film has such a clean device to do that,” says Wadlow, who co-wrote the screenplay with Chris Roach & Jillian Jacobs.

The characters literally get to say what they want and how they expect it to play out. “Just the expression of that fantasy reveals character. As storytellers, Chris and Jill and I, we’ve tried to be clever with how those fantasies unfold. We reveal more about the character, test the character, and force them to grow and change as they confront some twisted version of their fantasy.”

In Blumhouse’s Fantasy Island, the enigmatic Mr. Roarke makes the secret dreams of his lucky guests come true at a luxurious and remote tropical resort. But when the fantasies become nightmares, the guests have to solve the island’s mystery in order to escape with their lives.

At the center of the movie is the enigmatic Mr. Roarke, the white-suited steward of an island where fantasies come to life. He has welcomed the island’s guests, all with distinct fantasies, to come to the island where they will live out their dreams, but also with the promise and the warning: the results may not be what was intended.

Be careful what you wish for. In Blumhouse’s Fantasy Island, any fantasy could come true… but fantasies come with a price.

At the center of the fantasies is Mr. Roarke, played by Michael Peña. “What I love about what Michael Peña did with the role is that he feels both contemporary and timeless. I can’t think of another actor who could have pulled that off,” says Wadlow.

“We wanted to keep him in the shadows at first, to make him feel mysterious and elusive, then over the course of the film, pull back the layers and play with the audience’s understanding of Roarke – sometimes he’s funny, sometimes he’s sinister, sometimes he’s curt, sometimes he’s overly formal. There’s a large section of the film where the audience might wonder if Roarke is malevolent, that he somehow wants bad things to happen to these people. They’ll be asking, hopefully, ‘Why would he want that, is he trying to teach them a hard lesson?’ We always want to keep the audience on their toes and keep them wondering, what is this guy’s deal?”

“It’s the ultimate wish-fulfillment movie,” says producer Jason Blum, whose Blumhouse label has brought horror fans some of the top movies in the genre. “The idea of going to a magical place where all of your fantasies come true – and things go very wrong – that’s very ripe for a thriller.”

For Blum, the movie fits squarely into the Blumhouse oeuvre.

“The reason this is a Blumhouse film is that we try to focus on character and drama and story – anything scary is organic to the storytelling and to the dramatic arcs of the characters. When fans go to see Blumhouse’s Fantasy Island, they’re going to see this situation that – except for the island where wishes come true – feels very grounded, it feels very real. And because of that, it feels much scarier.”

How the project originated

Producer Marc Toberoff obtained the film rights from Gene Levitt, the creator of the iconic television series, setting up a potential movie at Columbia with the pitch “be careful what you wish for.”

Later, co-writer/director/producer Jeff Wadlow, who had helmed Blumhouse’s hit Truth or Dare, indicated to Blum that he had an idea for a supernatural thriller inspired by ‘Fantasy Island.’

“Jeff’s idea seemed really exciting to me,” says Blum. “I love working with existing IP and reinventing it, and there seemed like a great opportunity with this film to do just that.”

No wonder that it seemed like a great idea. The original television series, which was created by Gene Levitt and starred Ricardo Montalbán as Mr. Roarke, ran for seven seasons and became iconic, entering the culture to such a degree that even audiences who haven’t seen the show have a sense of it.

So Blum was a huge believer in Wadlow’s idea – and if you’re going to do a project inspired by “Fantasy Island,” why not see if you can actually work with the real deal? The producer approached the rights holder, Sony Pictures, to see what was possible.

“A month after I mentioned it to him, Jason called me up and said, ‘So you like “Fantasy Island?”’ ‘Well, yeah, who doesn’t.’ And he asked, ‘You wanna make a movie version of it?’ ‘Is that possible?’ ‘Yeah, I got the rights.’ So I responded, “Hell, yeah!” And we were off to the races.”

Wadlow says that the idea came naturally to him because the themes were always present in the material.

“I loved the dark magical realism of the original show,” he says. “It dealt with real emotions and real characters, but manifested them in a surreal way that always had a little bit of an edge, a little bit of bite. They always seemed to embrace the notion of wish fulfillment at a terrible price and presented it in a unique fashion every week.”

For Wadlow, the fact that younger audiences might not be so familiar with the original show was part of its appeal.

“To me, that’s exactly the kind of IP that we should be remaking,” he says. “If you have a great piece of IP that isn’t as present in the popular consciousness as it used to be, that’s the moment to reintroduce it and to spin it with a new take on it, so that you’re both engaging the fans that do remember it but also offering it up to a whole new generation that might not be familiar with it.”

As Wadlow and his writing partners, Chris Roach and Jillian Jacobs, began to plot out what they wanted the movie to be, the first step (natch) was to start fantasizing.

“One of the first things we did was just to list the kind of fantasies you would expect – sure, we had the deep, emotional ones, but we also had the fun, superficial fantasies. And we kept in mind that the fantasies were going to be realized, but they were never going to come to fruition exactly the way that you expected. In fact, we made a point of telling the guests and the audience that up front – so we’re not trying to trick anybody in that respect.”

It was also important to Wadlow to offer several nods to the original – Mr. Roarke’s white suit a good example – but also structural points. “The film begins with a plane arriving. I think that’s really important,” he says. “During development, it was suggested that maybe we should meet the guests at home, before they leave, and I said, ‘No, the first time we see them is when they get off the plane, just like the show.’ That’s not about being slavish to the original; there’s a certain elegance to that – we only meet them when they show up on the island.”

Another structural choice Wadlow transferred to the feature film is the interplay of four fantasies. “For the majority of our movie, we’re tackling four different fantasies with different characters and showing you how the fantasies unfold in surprising ways, as if you are watching two episodes of the original show,” he notes. “For me, it was important to make that structure work before we altered it.”

Wadlow says that he hopes people have fun seeing the dark fantasies play out as if the audience was orchestrating the fantasies themselves. “We are presenting a narrative that has an awareness that we are intentionally putting the characters through a gauntlet, an ordeal that will force them to grow and change and experience their fantasies in a way that they weren’t expecting,” he says. “I hope that the audience enjoys that process and with a little bit of glee, watching these people learn their lesson.”

Blumhouse’s Fantasy Island follows director-co-writer Jeff Wadlow’s first collaboration with producer Jason Blum, Universal’s original theatrical feature Truth or Dare, which grossed approximately $100 million in theaters from a budget of just $3.5 million. Before that, he wrote and directed True Memoirs of an International Assassin, a film that was at the forefront of Netflix’s expansion into original features. His preceding writing/directing effort, Kick Ass 2, was named one of the ten best films of the year by Quentin Tarantino, who stated it demonstrated a “real auteur approach.”

A graduate of Dartmouth College, Wadlow attended the Peter Stark Producing Program at USC, where he conceived and directed his thesis film, tHE tOWeR oF BabBLe, winning more than a dozen awards before taking the top prize in the Chrysler Million Dollar Film Festival.

Wadlow used the million-dollar grant to make his first feature, Cry Wolf, which was released by Universal Studios. His next feature, the action/drama Never Back Down, beat out big-budget competition to win Best Fight at the MTV Movie Awards, kicking off an MMA franchise with two sequels and counting. Wadlow also developed and executive produced the worldwide hit Non-Stop, as well as writing the story and co-writing the screenplay for Bloodshot, a feature film starring Vin Diesel that will be released this March from Sony Pictures.

In television, Wadlow collaborated with Cartlon Cuse (Lost) and Kerry Ehrin (Friday Night Lights) to help launch the Emmy-nominated series Bates Motel, then re-teamed with Cuse as a writer and Co-Executive Producer on the final season of The Strain, created by Guillermo Del Toro (The Shape of Water) and Chuck Hogan (The Town). .

Since 2004, Wadlow has returned to his hometown to lead The Adrenaline Film Project, a program he founded to help filmmakers of all ages, write, shoot, and screen a short film in the Virginia Film Festival in just 72 hours. Through the Adrenaline Film Project, Wadlow has helped produce more than two hundred short films, personally mentoring over six hundred aspiring filmmakers.

Screenwriter Chris Roach has been a TV veteran for many years, including Executive Producer of the CBS show “Big Brother.” His first feature credit was from his original script, Non-Stop, the hit 2014 Liam Neeson film. He has since been writing with both Jillian Jacobs and Jeff Wadlow, and this trio first came together for Blumhouse’s Truth or Dare in 2018.

Originally from Columbus, Ohio, screenwriter Jillian Jacobs has worked as a producer for such TV shows as “Bar Rescue” and “Big Brother.” She has been writing with Chris Roach since 2014 and her first feature credit was Blumhouse’s Truth or Dare in 2018.