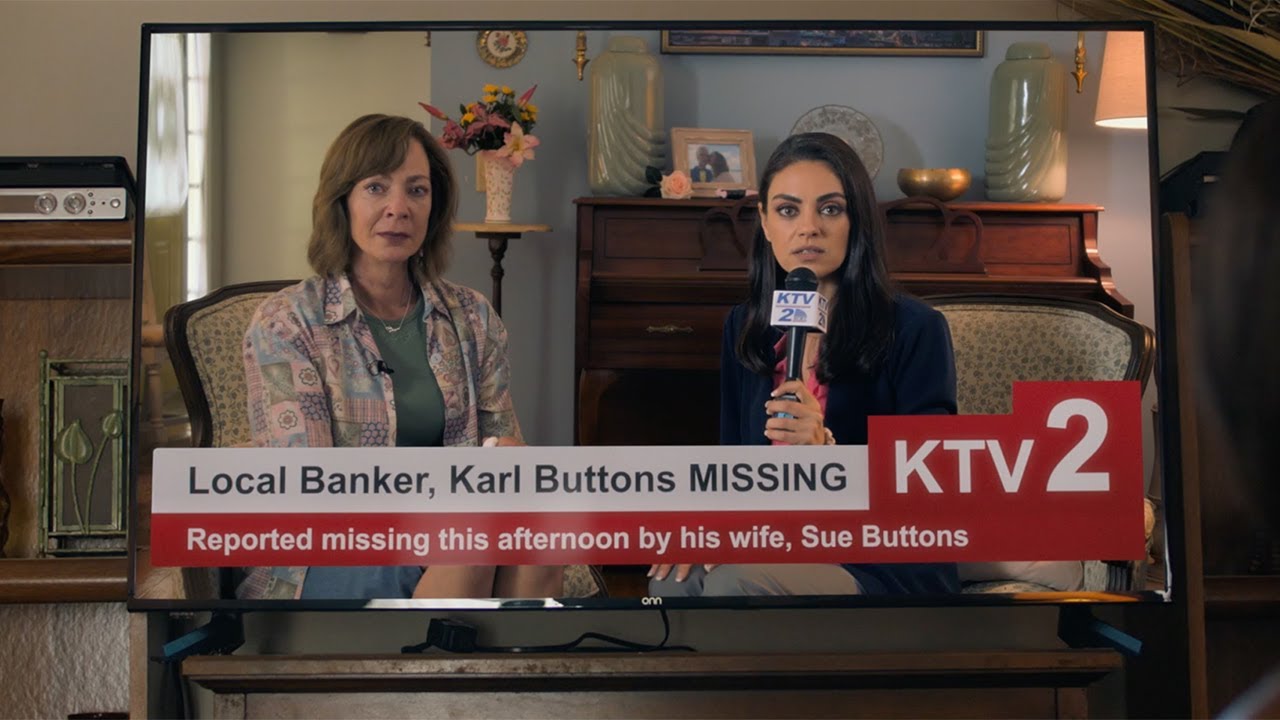 From a crackling screenplay by Amanda Idoko, a young Bronx-born screenwriter, and daughter of Nigerian immigrants, and visionary director Tate Taylor, comes Breaking News In Yuba County, a deliciously wicked, dark and humorous dissection of America’s fixation on fame, notoriety, and victimhood, even while there is actual marginalization happening just out of view.

Set in fictional Yuba County, California (but filmed near Taylor’s home in Natchez, Mississippi), Breaking News In Yuba County began as a Black List screenplay by writer Amanda Idoko (TV’s The Mayor and The Goldbergs, Apple’s Central Park, the upcoming Dead Dads Club and Plastic Man) that pushed more than a few envelopes.

Read more about Amanda Idoko’s journey as a screenwriter

“The script was so audacious, and as a writer, Amanda didn’t care about who she was offending,” says Taylor, who has built a career that crosses genre: From Oscar-winning period-piece comedy-drama The Help, to telling the story of musical legend James Brown biopic Get On Up, to psychosexual suspense dramas The Girl on the Train, modern-day horror parables (Ma), and action thrillers (Ava).

But several things tie Taylor’s diverse films together: A heightened but human approach to the way people relate; extraordinary female characters brought to life by some of the greatest actresses working in Hollywood today; an appreciation for and nurturing of creative and cohesive ensembles; and that rare and uniquely nimble approach from one genre to the other.

“Right off the bat, Amanda’s screenplay was very real and very raw, and very offensive, which made me smile,” says Tate. “I read it and thought, ‘I cannot believe what I just read! Did that just happen?’ I was excited to bring that to the screen.”

Idoko’s script reached the big screen via an amazing journey

Idoko was a pre-med student who switched gears at Cornell University after falling in love with theater and the performing arts. She adapted the script from a play she wrote, and when her first screenplay Breaking News In Yuba County was selected for the Black List in 2017, producer Franklin Leonard chose the acclaimed screenplay for his upcoming slate.

“I love stories in which ordinary people make bad decisions that snowball into chaos and misunderstanding, so I wanted to write something fun and entertaining,” says Idoko. “I like ensemble stories as well, and I love crime comedies and dark humor — they’re the movies I love to watch, like the Coen brothers’ Burn After Reading, as well as films like Nightcrawler and Gone Girl.”

Sue Buttons (Allison Janney) is an underappreciated suburban wife in pastel-painted Yuba County who gets no attention — not even on her birthday, which she spends buying herself a cake while listening to self-affirmation tapes. But on this day, getting noticed isn’t the only thing missing from Sue’s life: When her husband Karl (Matthew Modine) goes missing, she gets a taste of being a local celebrity as she embarks on a city-wide search in small town Yuba County, California, to find him. In an effort to prolong her newfound fame, she stumbles into hilarious hijinks as her world turns upside down, dodging a wanna-be mobster (Awkwafina), a relentless local policewoman (Regina Hall), her half-sister (Mila Kunis) — a local news reporter desperate for a story — and her husband’s dead-beat brother (Jimmi Simpson) along with his sidekick (Wanda Sykes), who all set out to uncover the truth behind the disappearance.

A dark comedy about how attention, fame, and hijinx are a real killer combo.

Says Allison Janney, “The story is a satire of our current culture in the United States, which is centered so many ways on the media obsession with violence, self-help therapy, and even body image. That’s actually what my father said! And I agree with that, and I think it’s about our obsession with media in all forms.”

“The script really grabbed me from the start,” says Janney. “I thought it was incredibly exciting, dark, funny, and violent — just a great mix! Sue Buttons is someone who is invisible to most people in her life, including her husband and her sister, and at work, she’s a woman that nobody pays much attention to. That breaks my heart, and I feel like I have an affinity for playing those kinds of women.”

“When they told me Allison was playing Sue, I thought, I can’t think of more perfect casting,” says Idoko. “Just watching her on set, seeing her in the role, my mouth was open the entire time. Sue has an internal emotional journey, and the way Allison externalizes that, you see the journey happen on her face. You can’t not watch her.”

Mila Kunis, who plays Sue’s half-sister Nancy, a hungry-to-make-it local reporter, says that Breaking News In Yuba County is funny, dark, serious and lighthearted all at once. “The movie deals with what suddenly having attention does to a person who hungers for it,” says Kunis. “The story is very left of center, a little bit quirky, and not what you expect it to be. It’s also not something that can fit easily into a box, which to me is always exciting. Every scene has layers upon layers.”

“I loved the whole world of this film,” says Hall. “When I read the script, it was all of these unique characters in this seemingly normal world which really has so much running underneath it. It’s a smart, witty, funny character-driven story filled with nuances. It takes on the idea of fame and self-worth, and how it’s ‘reality-versus-distorted reality.”

Awkwafina, who adds unpredictability to Mina on top of greed and a gift for gab, saw the focus clearly.

“The story is definitely symbolic of what the media represents to some people,” she says. “I think today, the media is said to be your friend, but there is also kind of an uglier side to it.”

The role of the sex-and-money-obsessed Leah is played by Bridget Everett, who sees one aspect of the story as a battle between being alone … and being notorious.

“I think the themes of this film are loneliness, survival at all costs, and learning to fight or having the fight in you,’ says Everett. “People often now want notoriety at almost any price.”

“The story is so self-aware, while at the same time, the tragedy in it is that the media doesn’t guarantee you a better life,” says Norris (The Help, Ma, Ava).

“It doesn’t guarantee you a character of more substance, or better relationships. And at the end of the day, you still have to have the gumption to punch through to get what you want. This movie is brutal and funny and honest, and has layers about how we perceive each other and our culture.”

Adds Taylor, “One of the key themes for me is, the way people try to avoid becoming irrelevant. We all know we’re guinea pigs in this experiment called social media. With everybody’s need to be liked and friend-ed, a lot of people are feeling left behind, and the question becomes, how do we deal with that?”

That aspect of Idoko’s script is something that appealed to Franklin Leonard, and it was there in the script from the beginning.

“As a woman and a person of color, I want to see myself in the kinds of movies I love, and allow others to see that representation in these worlds, since that’s so rare,” says Idoko.

“I feel like in a lot of movies, they’re skewed so white and male, and when it comes to comedies like this, I feel like those aren’t the only people making messed up decisions!” Idoko laughs.

“So it was important to me to make this world look like the real world. We don’t get to see a lot of movies that have this kind of tone, and that was crucial to me, to make sure the story was playing out in a very realistic landscape, and a landscape different from the ones we usually see at the movies.”

“Getting to see so many great women in this is definitely something I was going for,” says Idoko. “ I wanted to have this chaotic world populated by women, and give women the chance to drive the action.”

“I absolutely went into this script wanting to create a world of women who get to be messy and chaosoriented,” Idoko continues. “And then being able to go to set and have such an amazing ensemble was great. And with so many women on the crew, including our amazing DP Christina Voros, was incredible. It was great having so many women on set. It’s wonderful to be able to tell a story like this from the female perspective.”

Idoko, who was on the set during filming, says, “Seeing all of these amazing actors bring my words to life was unreal. This being my first produced film, it was such a cool process to see it all come together. It was truly surreal to see all these amazing actors saying the words I wrote.”

Producers Jake Gyllenhaal and Riva Marker helped bring Idoko’s words to the screen through their company Nine Stories, knowing that Taylor’s talent and the energy he creates amongst people on-set would be perfect for the film.

The producers at The Black List and Nine Stories were looking for a financier, Tate was attached to direct, and Allison was set to play Sue Buttons. We read Amanda’s script and immediately thought it had
tremendous potential,” says Ford. “Everything Allison does is of the highest caliber — it’s always great to be in the Allison Janney business! — and Tate has a great commercial track record, especially with female-driven characters and ensembles. Meanwhile the diverse mix of characters was also a perfect angle for AGC to get involved from, as we typically gravitate towards multicultural stories across both our film and TV slates. So there were a number of great elements that drew us into the film and that was
before Tate went away and came back with such an amazing ensemble of additional cast.”

“Tate Taylor always builds an incredible camaraderie on screen and off,” says Marker. “Dinners at his home almost nightly, a true sense of togetherness when working on his films. It was a collaborative,
spirited shoot — a lot of friendships were made, and a lot of good will to work together again.”