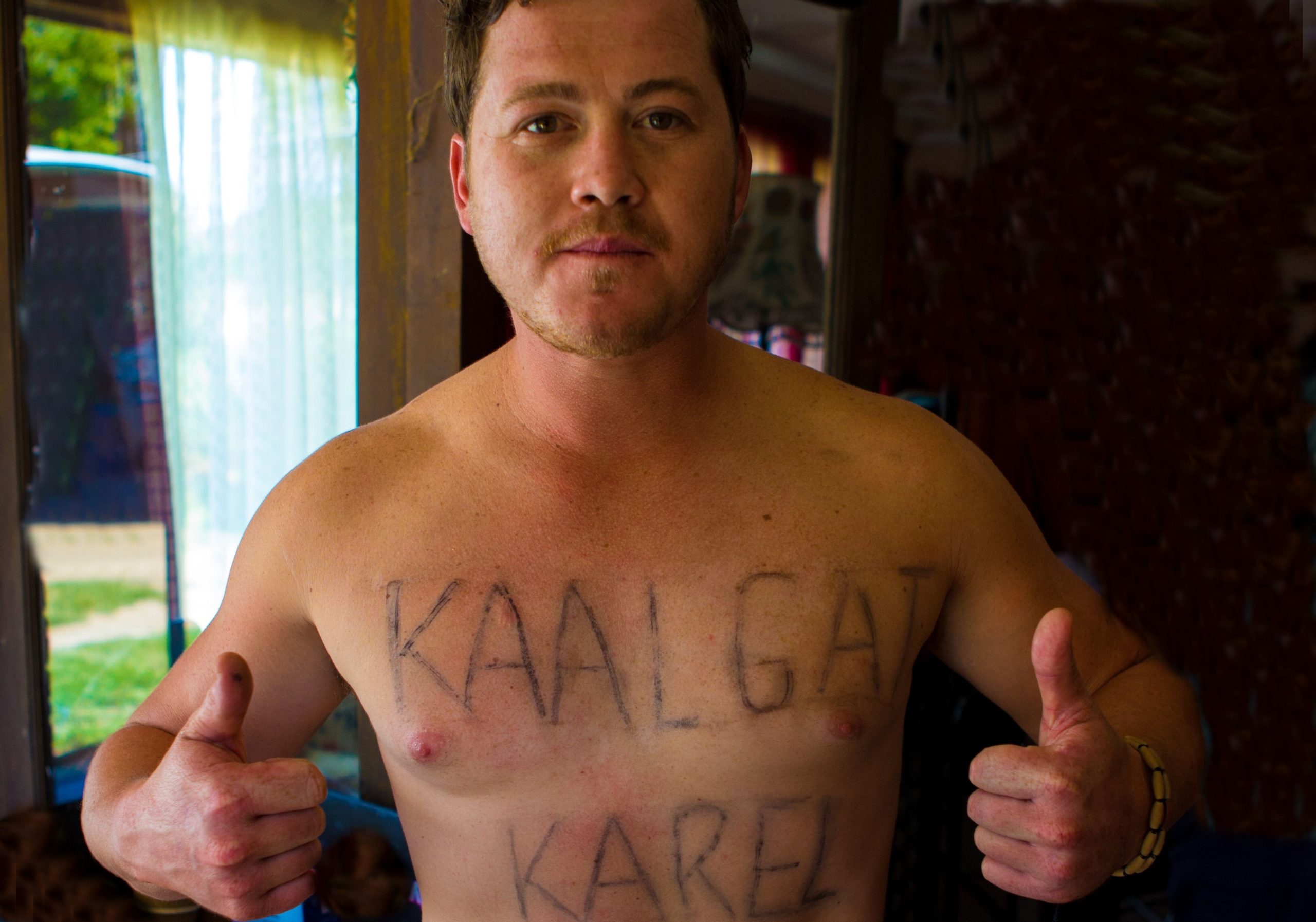 It’s third time lucky for director Meg Rickards who had to postpone the release of Kaalgat Karel twice and can now offer filmgoers a ‘fun fliek’ that’s more needed than ever before, offering a funtastic romance with plenty of laughs.

It tells the hilarious tale of Karel Venter (Francois Jacobs), a thirty-year-old guy who loves the thrill and accompanying social media stardom of streaking during sports matches. He falls head-over-heels for the paramedic, Rita (Christa Visser), who saves him after a streak gone wrong, but there’s a problem; she’s a strait-laced single mom who has no interest in his streaking shenanigans.

Where did the inspiration for Kaalgat Karel come from?

Writing a story about a streaker was my husband Paul Egan’s idea. He is a big sports fan and was fascinated about how streakers break all the rules and how much the crowd always seems to get behind them. What drives a streaker to hurtle butt naked across a field? It’s pretty carnivalesque and subversive!

How did the inspiration turn into the passion of telling this story?

We started looking at how social media works, and wanted to say something about how we live our lives through social media – for better or worse – and how we might miss real human connection. This was intriguing and drove us to tell this particular story. That and a desire to create something fun!

Tell me about the writing of the screenplay, with director wife and screenwriter husband working together on it? What was the process?

Paul and I sat and worked on the story together – from everywhere from our home office in Cape Town, to the Orange River to the Eastern Cape bush. We often got up at 4 or 5 am to grab some time together. I had more screenwriting experience so ended up getting the story into a workable structure, but Paul provided the inspiration for the story and its earliest outline, and we worked on it together every step of the way – including enacting the dialogue with each other! I can truly say we had a lot of fun…. It was a real labour of love and laughter.

Did you write the screenplay with any particular actors in mind?

Well, we’d worked with Christia Visser on our previous film TESS and think she is superbly talented, so we always envisaged her as Rita, but no, to be honest, we didn’t write it with the others in mind! Now I wouldn’t hesitate to work with the other actors again… Francois Jacobs, Schalk Bezuidenhout, Siv Ngesi, Eden Claassens – they are all gems!

How much did the screenplay changed from page to screen?

The screenplay didn’t change a  great deal, although the original story included a huge central sequence at a cricket match. We had 3000 people being bussed in as extras for a provincial match at Buffalo Cricket Stadium in East London. The heavens opened, it poured down with rain and the match was cancelled! So we had to do some pretty fast re-writing around that, as it had several repercussions for the plot.

Was it a difficult process from page to screen? Tell me about the obstacles?

Well, apart from the Eastern Cape weather, which wrought havoc with the schedule, four of our crew, including the medic and our Director of Photography, contracted Tick Bite Fever. That was pretty hectic. Overall, though we had a great deal of fun, and despite the blood, sweat and tears, it’s the happy memories that remain.

Tell me about your views on how the pandemic has influenced South African filmmaking?

The pandemic has been nightmarish for the industry, as it has been for just about everyone.  We were most fortunate that our film was in the proverbial can by 11 March 2020 and then we stayed on in East London a bit longer or so to finish running a training programme for our interns – so we were still there when the first hard lockdown was announced. We dodged a deadly bullet for the production! We were fortunately able to carry on with postproduction through several months of lockdown… but then had to postpone the release of the movie twice.

We also had another production which was lined up which had to be delayed.  Many production companies have closed down or are facing bankruptcy as with shoots having to close down when crew or cast have contracted Covid. It’s terrible for artists all round. Luckily, it seems that South Africans are now ready to go back to cinemas. Especially if one is double vaxed then it is definitely time to get out there a live a bit – especially in this coming lull between infection waves. There are also lots of safety measures in place in cinemas.

Do you think the streaming of films have influenced the industry?  Your views on this.

I think fewer and fewer films will be made for cinema. I think on the one hand, there is a wonderful array of choice with all the streaming platforms available. On the other hand, I think that there is a lot of mediocre work being produced as platforms scramble to attain enough content. So I think it’s a mixed blessing.

How do you see the future of filmmaking in South Africa?

I think more and more films will be made directly for the small screen.

And the future for screenwriters?

I think there is work out there if you are talented and work hard. Sometimes the rates are untenably low. That’s a problem. It’s very difficult to make a living out of only screenwriting in South Africa.

What tips do you have for screenwriters to get their work to the big screen (or television)?

Connect with producers and find out what they’re looking for. I get sent a lot of scripts which are just plain unrealistic in terms of being fundable. Write stories which are affordable to tell and also that audiences want to watch.

Find your own voice and write original stories. I see a lot of derivative work and wannabe Hollywood stories. They don’t work. Local stories are more likely to succeed, even for overseas audiences.

Have a clear controlling idea. Be clear about why you want to tell your particular story now.

Try to find like-minded writers and read and critique each other’s work thoroughly before putting it out there.

Write, rewrite and rewrite some more!

Although the film is a romantic comedy, it also deals with important issues like single parenting, different cultures joining forces to overcome obstacles and how the every man triumphs by believing in hope?  Your view on this?

I don’t think we could have written a film that didn’t have some real “issues” at its heart. What really drove us was talking about the importance of real, genuine human connection. All the other themes you mention I suppose come out of that.

I hope they have a “lekker lag” and feel warm and fuzzy, and think – even subconsciously – about the human connections in their lives.

Our earlier films have all been much more serious and include 1994: the bloody miracle (2014) which I co-directed with Bert Haitsma, Tess (2016) and Atlantis(2021). These films have won a number of international awards and have been used as tools to promote dialogue around democracy, reconciliation and gender-based violence.

Kaalgat Karel is a much lighter fare but to our delight is doing very well on the international circuit – including winning four “Best Film awards” – in Los Angeles, Moscow and two in the UK.

To my surprise, I found I absolutely love working in comedy, and have written a brand new comedy drama, which is hopefully going into production next year.