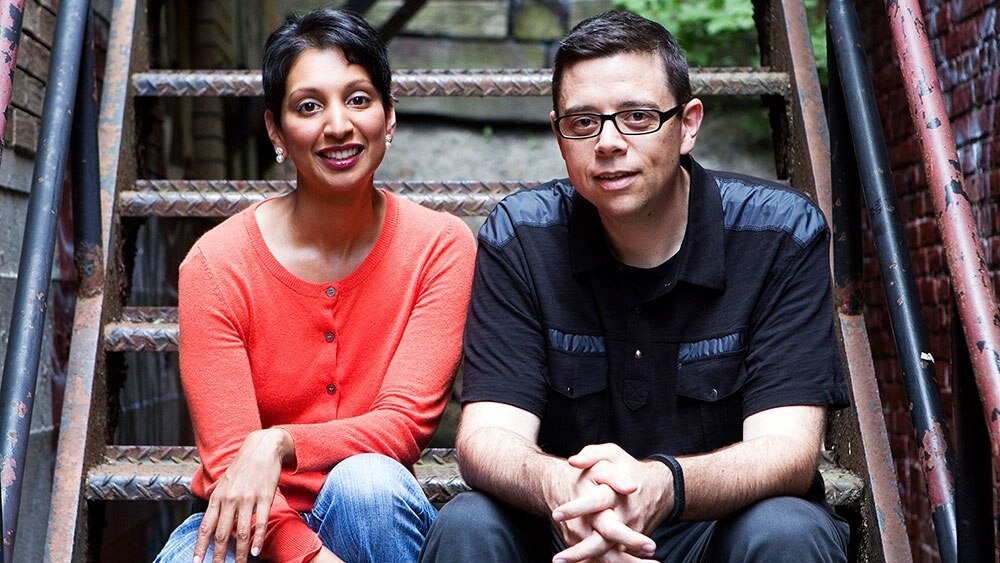 Aron Gaudet and Gita Pullapilly, a husband and wife, writing and directing team, discovered the real-life story that inspired their film Queenpins by searching the remote corners of the internet and landed on a coupon blog that talked about the coupon caper.

Husband and wife team, Aron Gaudet and Gita Pullapilly are award-winning writers, producers and directors known for their intimate and authentic storytelling. They currently have projects with Amazon Films, STX Entertainment, and 101 Studios.

Gaudet & Pullapilly started to create a niche, collaborating on true stories, most notably the acclaimed, Emmy-nominated feature documentary, The Way We Get By. They then moved into the narrative space with their feature, Beneath The Harvest Sky. It was only natural for their first studio film to come from this same mold.

Pullapilly recalls how she discovered the stunning story of the multi-million-dollar coupon scam: “I went down the rabbit hole of search engines, eventually landing on a coupon blog that talked about the coupon scam. Aron and I were immediately drawn to the story and had to understand it more. We reached out to the investigator on the case, who was able to provide us with the police reports and the criminal court case. It turns out 96% of Americans have used coupons. There’s a whole psychological aspect to coupons we never knew existed. It all sounded so unbelievable and over the top, and we knew the story had the makings for a great comedy.”

Pullapilly and Gaudet then traveled to Phoenix, the home base of the caper, and began interviewing the detective and researching the story. These conversations led them to create their own characters and build a script, incorporating some of the real-life elements from the coupon crime.

From the onset, Pullapilly and Gaudet wanted to imbue their coupon crime caper with humor and heart. They were also determined not to fall into the typical buddy comedy trope, where the two best friends have to fight with each other, have a falling out, and then come back together for their happy ending.

“We just felt that these two, smart women had bigger obstacles to overcome in life than simply fighting with each other,” says Pullapilly.

Gaudet explains: “Connie and JoJo are modern-day Robin Hoods, and their adventure is even more absurd because it’s about coupons, loss prevention officers, and badass postal inspectors.” The latter being a career that the filmmakers – as well as most of the rest of the world – didn’t know existed.

For Gaudet and Pullapilly collaboration is everything. It’s what makes their marital and  professional unions work so well. Part of that collaboration involves a unique “servant leadership” model in their directing process. On set, Gaudet and Pullapilly used several leadership exercises to inspire the cast and crew to push their egos aside, collaborate with each other, and always be in service to the story.

Kristen says Aron and Gita created an incredibly collaborative set. They are “beautiful partners who have a common goal and execute it together with all of us…it’s empowering. I love being directed by them.”

“They’re also some of the best writers I’ve ever worked with. Their script is so nuanced and the words are chosen so perfectly. It’s very easy to say their words,” says Kristen.

Working closely with their department heads, Gaudet and Pullapilly were intent on creating a comedy grounded in the real world.

Bell hopes audiences will see themselves in Connie and JoJo, and say, “Yeah, I can totally see why they did not feel valued and why they decided to break some rules, because everything was stacked against them. So, they decided to make their own rules.”

Adds Gaudet, “We hope Queenpins gives audiences a chance to laugh and escape for a moment, and have fun with their loved ones. We want audiences to walk away feeling joy– especially after what everyone’s been through this past year and a half with COVID and quarantining. We hope they’ll feel inspired to find their own loophole to happiness and success.”

Connie Kaminski is truly a character created from the heart

Connie’s journey mirrors the filmmakers’ own path to devising Queenpins.

“We tried for years to get a bigger budget film off the ground, and we were constantly being told that we, as filmmakers, didn’t have any value. Time and again, we felt undervalued and discounted. We were fighting to break out of the box that Hollywood had pigeonholed us into. Most people know us for our dramatic work, so making a comedy was completely unexpected, even to our own talent agents. They told us they didn’t know we were funny. In a way, it was our loophole to prove ourselves in Hollywood, and it worked.’

Connie is trapped in a loveless marriage, struggling day to day to find some joy. Some measure of happiness is provided by her mastery of couponing, as she sees it as a win by saving hundreds of dollars during each of her grocery shopping excursions. With coupons, Connie controls her time and her life. Her ultimate triumph is nabbing 400 dollars’ worth of detergent for a paltry 57 bucks.

It’s no surprise that Connie excels at it; she’s a relentless overachiever and go-getter and was an Olympic athlete in the unheralded sport of race walking. “She’s a race walker, an extreme couponer – everything Connie does she takes to the limit,” Gaudet reveals. “When she does something, she goes all in.”

Kristen Bell was the first actor to be cast, joining the team after wrapping the final season of the critically hailed comedy series The Good Place. It was a match made in coupon clipping heaven. “The first time we sat down with Kristen, we knew instantly that she was our Connie,” Pullapilly remembers. “She has many of those great traits that Connie possesses. Kristen is a real go-getter, like Connie. Equally important, we wanted audiences to love Connie even when she’s committing crimes, and Kristen can really pull that off. She has that ability to take audiences on these crazy, whirlwind adventures with her and they love it.”

“You can’t help but fall in love with Connie as she’s breaking bad with this coupon scheme,” Gaudet adds. “Kristen’s choices for Connie are so perfect that you’re rooting for her, no matter what she does. You want to see her pull off this caper. The system is so broken, why shouldn’t she try to find a loophole to succeed?”

Although she’s not a coupon collector herself, Bell has fond memories of a member of her family who made good use of them. “My grandmother was an extreme couponer,” she recalls. “As a child, I’d visit my grandparents and a large part of their basement was made up of cardboard boxes filled with coupons, each box catalogued according to the discounted product. My grandmother ultimately started college accounts for all her grandkids from what she saved with these coupons, as well as through writing the participating companies and getting small checks back in response. So, I knew this had the makings of a big underground business.”

Like Connie, she has found herself trapped in a kind of prison from which she’s eager to flee. But, having been the victim of identity theft, JoJo’s prison is economics. She has been forced to move in with her disapproving mother, and hawk crunchy snacks over her social media channels.

JoJo is portrayed by Kirby Howell-Baptiste, whose potent on-screen chemistry with Bell was honed during previous collaborations on The Good Place, Veronica Mars, and House of Lies. For Bell, reuniting with Howell-Baptiste and working out the Connie-JoJo dynamic was special. “JoJo is an entrepreneur who is trying her hardest and just cannot catch a break,” Bell relates. “Still, she’s the fun one in their friendship. Connie is a bit more calculating and ropes JoJo into her epic scheme. But they had to have a certain chemistry. Luckily, Kirby and I already had that friendship, so it was easy for us to dive into these roles.”

Bell continues, calling Howell-Baptiste “one of the great friends of my life,” and explaining that their frequent collaborations represented “the universe bringing us together. Our friendship grew with each of our projects together. When I read the script for Queenpins, I knew I wanted to do it with Kirby, so I said, ‘Aron and Gita, I want to make this movie, and I have your perfect JoJo.’”

But it was a visit to the filmmakers’ home that convinced the directing duo that Howell-Baptiste was their JoJo. “We were aware that Kirsten and Kirby knew each other, but while we were sitting with Kirby at our house, we just felt this kindness and compassion from her that we knew would be crucial in the friendship between JoJo and Connie,” Pullapilly said. “We immediately saw how Kirby would be able to bring JoJo to life in a really magical way,” says Gaudet.

Like Connie, JoJo is a “go-getter and hustler,” says Howell-Baptiste. “But her circumstances do not match the life she wants. She has had her identity stolen, so she has to build herself up from scratch, living at home with her mom.”

JoJo was a rising basketball star with a bright future in grade school, but now in her adult life, she’s realized her dreams didn’t quite pan out how she had hoped. “She’s kind of come from this past glory,” Kirby says. While the two friends have much in common, Howell-Baptiste notes that “JoJo and Connie are very yin and yang. The two women play off each other, and there are times when Connie is the devil on JoJo’s shoulder and then vice-versa. It’s a lot of fun to play with that kind of interaction.”

Howell-Baptiste noted that she became a kind of extreme couponer herself, in preparation for the role. “I watched every coupon-themed show on television and on the internet,” she recalls. “I began to collect coupons, which I enjoyed because I love a bargain. I also loved exploring the intricacies of couponing. What I found particularly interesting was how shoppers bearing a stack of coupons are often treated poorly by supermarket staff and coupon-free customers. For example, the clerks at the register sometimes make it seem like you’re creating a hassle for them by submitting your coupons, while the impatient people behind you in line are rolling their eyes. I found that to be really interesting in building the character of JoJo – knowing not just the ins and outs of couponing, but how it feels when you’re doing it.”

Gaudet adds, “There’s a lot of judgment going on when you walk into a supermarket and hand the clerk at the register a fistful of coupons. But many couponers are willing to ignore that hostility when they experience the coupon high of getting 100 dollars of groceries for 20 dollars. Why not, they’re winning.”