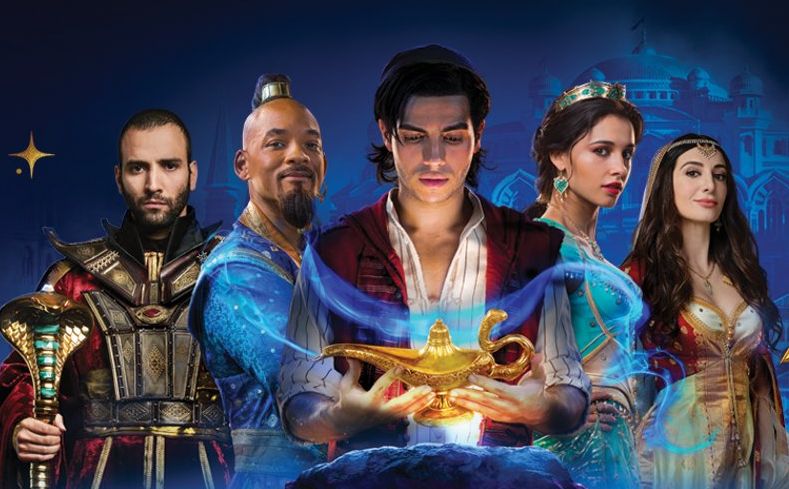 Loosely based on a Middle Eastern folktale from “One Thousand and One Arabian Nights,” Aladdin is a timeless story, and, as luck would have it, was one Disney was looking to revive as well.

The year was 2015, and, while there was obviously much to discuss in terms of how to reinvent the Oscar®-winning box-office hit, the question they kept coming back to was, why?

Producer Jonathan Eirich has loved Disney’s animated classic Aladdin since he was a child, and over the years has entertained the idea of bringing it to life as a live-action movie on the big screen.

Eirich shared the idea with Dan Lin, the founder and CEO of Rideback, the production company where Eirich serves as president, who agreed there was a unique opportunity to update the original 1992 film.

“It’s a great love story, but it’s also a great friendship movie and a great buddy movie,” says Lin. “So on one hand you have a classic romance between Aladdin and Jasmine, and then you have this growing friendship between Genie and Aladdin.”

“It is so beautifully structured and the music is so incredible that we realized there isn’t anything we would ever want to fundamentally change here,” says Eirich. “The challenge then became, how do we make it as fresh as possible to ensure we are still giving audiences something new, while delivering on what they love?”

Lin and Eirich envisioned the film as a big event film but also knew that it needed to have positive portrayals of Middle Eastern culture grounded in an authentic Arab context. “We had this amazing blueprint in the 1992 film that we already knew worked,” says Lin, whose credits as a producer include “The Lego Movie” and “Sherlock Holmes.” “We just needed to find ways to further enhance and contemporise it.”

Directed by Guy Ritchie from a screenplay by John August and Ritchie based on Disney’s Aladdin animation screenplay by Ron Clements & John Musker and Ted Elliott & Terry Rossio, Alan Menken provides the score, which includes new recordings of the original songs written by Menken and lyricists Howard Ashman and Tim Rice and new music written by Menken and songwriters Benj Pasek and Justin Paul.

Aladdin tells the exciting tale of charming street rat Aladdin (Mena Massoud) who is eager to leave his life of petty thievery behind, believing he is destined for greater things , the courageous and self-determined Princess Jasmine (Naomi Scott) and the Genie (Will Smith) who may be the key to their future.

John August (Dark Shadows, Big Fish) soon delivered a screenplay that was a more modern retelling of the story.

John August’s screenwriting credits include Go, Frankenweenie, Corpse Bride, Charlie and the Chocolate Factory and both Charlie’s Angels movies. He received a 2004 BAFTA nomination for his screenplay for Big Fish and wrote the book for the Broadway musical version. His middle-grade novel series, Arlo Finch, is currently published in 13 languages, with the third book in the trilogy, The Kingdom of Shadows, due out in February 2020. He co-hosts the weekly “Scriptnotes” podcast with Craig Mazin and runs the company that makes the popular screenwriting apps Highland 2 and Weekend Read.

“With ’Aladdin’ I just hoped I could come to it with an enthusiasm for what made the original movie so great, and for what it could be, and then I focused on why I wanted to make this movie today. That’s all you can do,” says August.

“But like all of the studio movies you make it is a very collaborative experience. I wrote a script a couple of years ago that got people very excited, and then the machinery starts. I am as curious as anyone to see what the final film is like. It’s a giant machine and we’ll see how it all turns out.”

Guy Ritchie added his signature touch to the script and signed on to direct.

Ritchie is an award-winning writer and director whose signature work encompasses a variety of mediums, including feature films, short films, music videos and commercials. He got his start in the entertainment industry working as a runner on commercials but quickly worked his way up to director before breaking into film in 1995 with a short film he wrote and directed, The Hard Case. He made his feature film directorial debut with the critically-acclaimed crime/comedy caper Lock, Stock and Two Smoking Barrels, followed by Snatch, Revolver,the crime thriller RocknRolla, Sherlock Holmes and its sequel Sherlock Holmes: A Game of Shadows, the big-screen adaptation of the TV series The Man from U.N.C.L.E., and King Arthur: Legend of the Sword. His most recent directorial effort, Bush, starring Matthew McConaughey, Hugh Grant and Colin Farrell, is scheduled for theatrical release in 2020.

The director behind such films as “Sherlock Holmes” and “Lock, Stock and Two Smoking Barrels” has a singular filmmaking style and a flair for fast-paced, gritty, visceral action, which was just what the film needed.

“I saw this as a sort of clash between two worlds. It’s a story about a street kid dealing with his insecurities in a Disney environment. The Disney environment gave me a new space in which to discover and experience a world familiar to me that I already feel confident in,” says Ritchie. “I like embarking on new, creative challenges, and this certainly was one.”

While “Aladdin” is one of the definitive tales about a hustler who ultimately makes good, it is also a full-fledged musical, something Ritchie found appealing. “I was interested in doing a musical,” he says. “I’ve got five kids, so that does influence the decisions that you make, and my house was all about Disney at the time.”

While director Guy Ritchie had never helmed a musical prior to “Aladdin,” his films are heavily influenced by music. “This is a musical in its purest traditional form,” he says, “and I liked the challenge. I didn’t try to be too ambitious or try to reinvent the wheel in terms of a musical, but I did want it to feel like it was fresh enough while still keeping the original tone of the first film.”

Director Guy Ritchie’s visual panache and contemporary sensibility are perfectly suited to “Aladdin.” With a live-action format he was able to bring a stylized look and feel to the breathtaking and visually-stunning world on screen while adding more depth to the story and characters.

“‘Aladdin’ is a visual spectacle of people, places and events that audiences don’t see in everyday life,” says producer Dan Lin. “You see this amazing palace, the huge Cave of Wonders with stunning jewels and gems, a Genie who shape-shifts at the snap of his fingers, and Aladdin and Jasmine flying on a magic carpet. These are things you want to see cinematically on the big screen.”