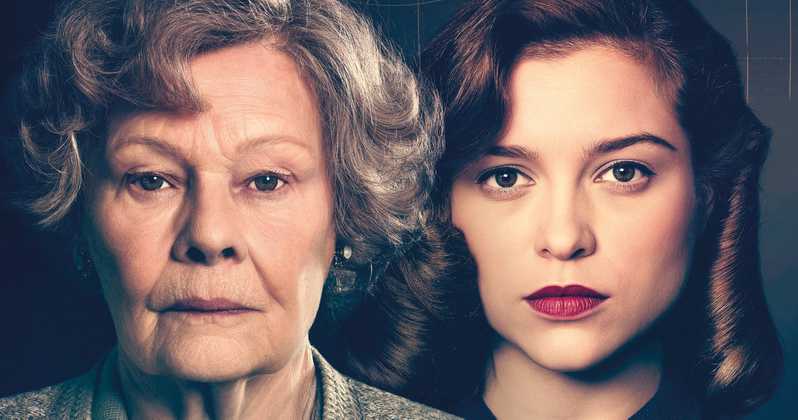 Directed by Nunn (original London production of Les Misérables, Twelfth Night or What You Will), from an adapted screenplay by Lindsay Shapero (Royal Wives at War, Enid) and based on Jennie Rooney’s best-selling novel of the same name, it stars Judi Dench (Skyfall, Shakespeare in Love) as an elderly lady living a quiet life in suburbia at the turn of the millennium whose tranquil life is suddenly disrupted when she’s arrested by MI5 and accused of providing intelligence to Communist Russia.

In 1938 where Joan was a Cambridge physics student who falls for young communist Leo Galich and through him, begins to see the world in a new light. Working at a top-secret nuclear research facility during WWII, Joan comes to the realisation that the world is on the brink of mutually assured destruction. Confronted with an impossible question – what price would you pay for peace? – Joan must choose between betraying her country and loved ones or saving them.

For award-winning theatre director Trevor Nunn, the novel’s potential as a movie was evident from the first moment he glanced at its jacket while browsing in a bookstore. It was a real page-turner, he recalls.

“These days, when you get to the end of a book, there’s not only a biographical note about the author but there’s an email address for your feedback. I used it to say: ‘I’m absolutely sure that the film rights have gone a long time ago but definitely this should be a movie’. Almost by return I got an email back from the writer Jennie Rooney saying: ‘No the film rights have not gone and I cannot think of anything more exciting’.”

Intrigued, Trevor contacted producer David Parfitt, whose many successful films include the Oscar-winning Shakespeare in Love. “I sent the idea to David and he responded enthusiastically immediately and then he read the book and become even more enthusiastic.”

“He came into the office, bouncing with enthusiasm, as Trevor can,” remembers David. “This is a film! You’ve just got to read it.” I read it and I thought, he’s absolutely right.”

Rooney’s novel, though fictional, was inspired by the extraordinary and controversial true story of Melita Norwood, a British scientist and civil servant, who gave secrets to Russia over a period of four decades through her job at a facility researching the construction of an atom bomb.

“We meet Joan when she’s in her early eighties in the year 2000, pottering around in her very nice suburban home, when suddenly MI5 arrive, and she’s dragged out, arrested and taken in for questioning,” says David.

“It turns out that she went to Cambridge with a man named Sir William Mitchell, who has recently died and they think may be part of a Cambridge Spy Ring. They believe they have found a link between Joan, William and the KGB. Our story, really, is the interrogation of older Joan, and through her, flashbacks back to 1938 through to 1947, and the story of her life, initially as a Cambridge student and then as a scientist working on the very secret Tube Alloys Project.”

A strong theme of the film is that Joan is provoked to spy not because of a Communist ideology, but because she is horrified at the bombings of Hiroshima and Nagasaki and wants to ensure this never happens again. If all countries have the same secrets, she feels, the world will be a safer place. What is also very much evident is that the threat she posed was disregarded because she was a woman.

“It is a sort of theme all the way through that women at that time are in the background, unimportant, ignored, and therefore sort of shadows who can easily become involved in espionage or who knows what else,” says David.

“There are incredible things that I found out. I knew nothing of this world of Cambridge, but you’ve got this gorgeous Newnham College full of brilliant women, who just got a certificate when they graduated, they didn’t get a degree like the men. Remarkable. And that went on until after the war.”

“It’s so shocking that such a distinction should be made and indeed when I researched into it I discovered that it continued to be made until 1951,” adds Trevor. “That there should be a lower level of accreditation even though they took the same exams.”

While the film brings to life the culture of The Cambridge Spies, this is very much Joan’s story, agrees David. “I knew something of the Cambridge Spy Ring, keeping their communist principles intact by spying for Russia. This actually isn’t that story. Joan has a very clear line through – she’s not that interested in communism particularly, it’s just that she’s found a very gorgeous boy who is. But she actually resists all attempts to convert her. In the end what it’s about is a moral dilemma around nuclear warfare. That anything she may or may not have done is because of that, and not because of her political views.”

“I think in the simplest possible terms it’s a small-scale story about a gigantic subject,” says Trevor. “You meet very very believable individuals at a very particular moment in time and therefore can relate to their foibles, their dreams, their yearnings.”

Joan first starts giving secrets to Russia while working as a secretary at the top-secret Tube Alloys Project, which is researching the potential development of the atom bomb.

“She is sent to interviews, quite mysteriously because they are personal recommendations, to work at a project called the Tube Alloys Project,” says Trevor. “It’s made very clear to her, signing the Official Secrets Act, that even to be interviewed is a top-secret activity.”

She discovers what the project involves through her connection with her boss Max, and British scientists are racing to develop the science involved before the Germans, carrying out similar research under Hitler. “There is a very great urgency to what they are doing,” he adds.

Bringing such a complex, multi-faceted story to the big screen – and setting it over three different timelines – would require the skills and input of some of our finest acting talent. Trevor Nunn knew instantly who he wanted to play his present-day Joan. His great friend and collaborator Judi Dench, who he’d worked with in theatre many times, had so much trust in the iconic director that she agreed in principle to the project before she’d even seen the script.

“It was always at the very top of our list that Judi should play this, and I had a chat with Trevor early on,” says David Parfitt. ‘We’ve got this fantastic story, we’ve now got this lovely script, what we need to really get this away is Judi Dench’. I first worked with her in the 80s and I’ve worked with her now four or five times. It was really just reuniting the team.”

On reading the script, Judi became fascinated by this seemingly innocuous woman and her extraordinary lifelong secret.

To understand Joan’s motivations we must see life through her eyes, and the casting of the young Joan was crucial to the film’s success. Actress Sophie Cookson plays the young woman whose life experiences carry much of the film.

The prospect of playing the young Joan appealed to Sophie as soon as she first began reading the script. “It was the first script I’d read in a long time where I really just raced through the entire thing – I was riveted from the start. I knew that Judi was involved which was like alarm bells flashing: ‘Do this project’. And Trevor was involved, who’s a complete legend in himself.”

The actress relished the idea of getting behind the motivations of such an interesting, complicated and multi-layered young woman, helping the audience understand the root causes behind why she makes the choices she does.

From Page to Screen: Adapting a Bestseller

To bring Red Joan to screen, the producers turned to experienced screenwriter Lindsay Shapero, who immediately became excited at the depth, complexity and potential of Jennie Rooney’s novel.

Lindsay Shapero started as a journalist before moving into factual television Executive Producing via MTV and then the BBC – her background in journalism fueling an interest in stories based on real life events. Her first feature film script Bitten By A Zebra won the Oscar Moore Screening writing Prize. She went on to write the BAFTA-nominated biopic Enid for the BBC, starring Helena Bonham Carter, which won an International Emmy. Her next projects were In Her Element for Oscar-winning director Volker Schlondorff and the Brit-list nominated script Trigger. Most recently, she has been commissioned to write feature scripts for Bedlam, (the producers of The King’s Speech) and Pathe Films. She was delighted to join the RED JOAN team when she was asked by David Parfitt and Trevor Nunn. Lindsay is currently working on TV and feature film projects for the BBC and European producers.

“Jennie made Joan someone who was doing it for reasons of passivism, more logical reasons than idealogical. I think that makes Joan’s character more likeable, more empathetic. We can see her journey more, rather than as a two-dimensional communist.

“She had done a brilliant job with the structure. Writing a screenplay is all about structure. You’ve got the two timelines. You’ve got the present-day timeline where you’re trying to find out whether she’s a spy or not. That gives you a fantastic framing device to keep going back into the past, to unpack the story as we go along.

“With the present-day timeline what you have to be wary of is it’s not the same scene happening again and again. ‘Did you do it?’ ‘No.’ You have to drip feed into those scenes information that changes your view of the characters. You have to introduce important backstory elements. In the present time, we see the long-term repercussions of things that have happened in the past. That’s why the two timelines are so useful.”

As well as the structure, Lindsay was drawn to the richness of the moral dilemmas in the novel, and the complex nature of the story – in particular the romance between the student Joan and Leo, a handsome, edgy young Russian with whom she embarks on a passionate love affair.

“Everyone sees this film differently. For me the film was always about: does Leo love Joan? And is he a man who can love? Leo is a fantastically complicated character. It’s about love, and duty, and business. I know what I feel but I think everyone can come away with a different opinion, and that’s really exciting.

“I think it’s also about how somebody who’s like all of us get sucked into something really extreme. I hope that’s what we’ve achieved with it. That you understand how an ordinary young woman could get sucked into what many of us would call treason. How you can take an extremist view without being an extremist yourself.”

Lindsay adds that having Dench as the older Joan was a great help in navigating such moral dilemmas. “You’ve got a huge bonus on your side because she could make anyone sympathetic. Such a great actress with such a huge charisma. For me it’s a big thrill that she’s speaking my words, and you know that someone of that calibre can make your words sound great.”