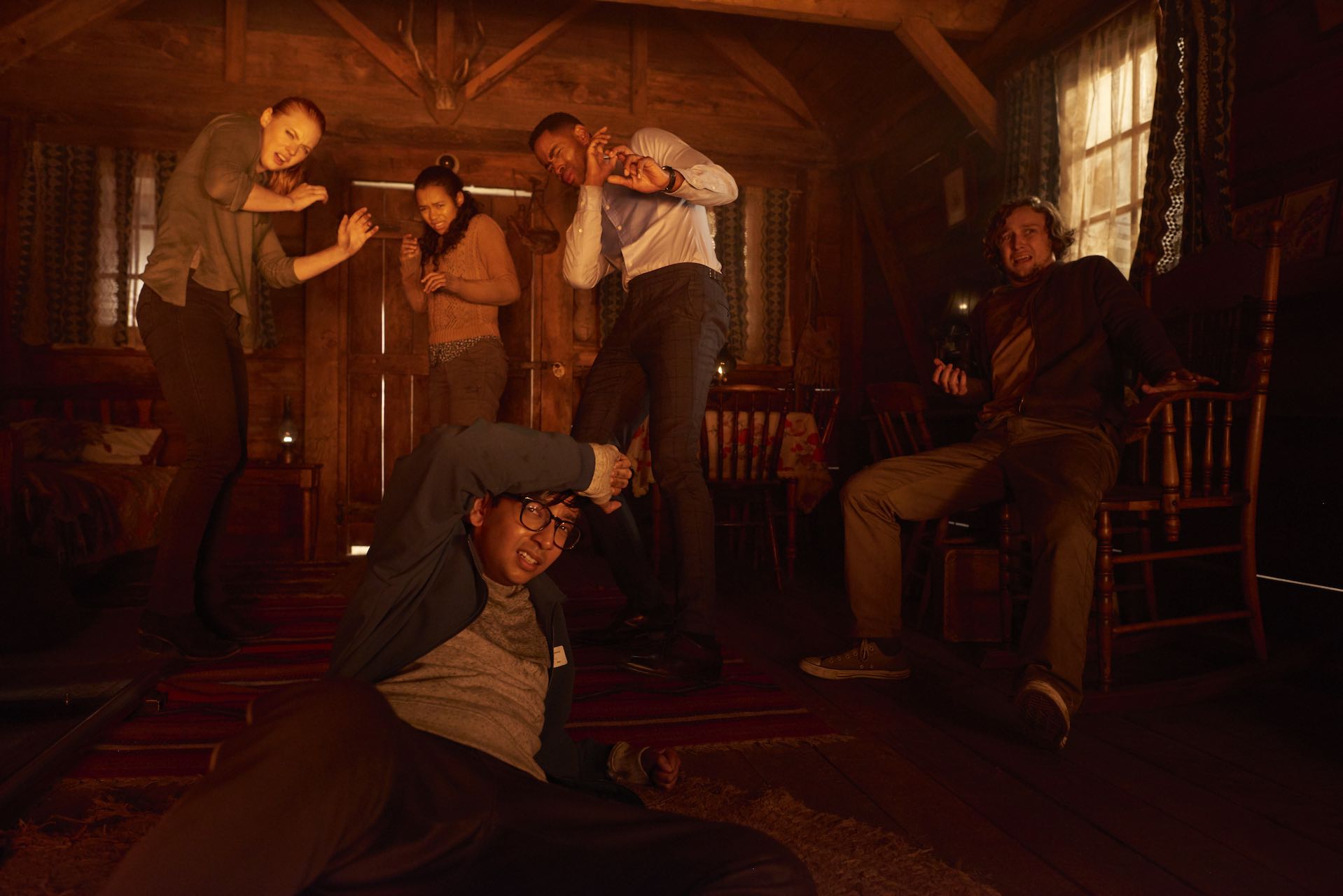 What sounds like a horror movie is one of the fastest-growing entertainments in the world: the escape room phenomenon.

Since the dawn of the concept in 2010, escape rooms have popped up all over the world at an amazing rate by satisfying human nature’s hunger for fun and escape from reality.

In Escape Room, You find yourself in a room – no windows, only one door, and it’s locked.  The madman who’s locked you in has set up a series of fiendishly clever and difficult puzzles that, when solved in the correct order, will lead to the key and your salvation.  And to add to the difficulty, he’s set a ticking clock, with one hour to complete the puzzles and escape… or face the consequences.

Armed with only your wits – and the variety of strengths of the people in the room with you – players have been cracking codes, deciphering enigmas, and unlocking hidden caches as quickly as they can.  Each room has a secret plot, with players piecing it together as a fun, team-building experience.

When producer Ori Marmur tried out an escape room with his family, he saw the potential for a film – and because audiences worldwide have embraced the concept, it could be a film whose themes had global appeal.

“I thought it was very immersive and incredibly fun, sort of a living boardgame,” he says.  The project seemed to be a natural fit with a classic locked-room mystery setup, and with producer Neal H. Moritz, he began to shepherd the project.  Quickly, they hit on a way to raise the stakes, making the ultimate escape room: one that is not only hyper slick and incredibly dangerous – when the clock runs out, it means death.

In the film, all of these characters have chosen to be part of the escape room experience – and, they will discover, there’s a mystery that links them all together.  “They all chose to be there – they haven’t been kidnapped or forced there,” notes Marmur.  That said, they all get more than they bargained for.  “They all go there expecting one thing and then it becomes a very different thing entirely.”

“The good escape rooms are really cinematic: you go into a cold war bunker, you’re rooting through CIA dossiers, then you hit a button and suddenly a hidden projector turns on with a blue light and you see a map,” says Adam Robitel, who previously directed the worldwide horror hit Insidious: The Last Key. “These rooms are well art-directed so I saw the potential for a visually appealing film.”

“It was an opportunity to do something fun.  This is a genre where everything usually happens at night and the visuals aren’t always compelling – it leaves a lot to your imagination,” he says.

“We went the other way; the movie has incredible sets with arresting visuals and an experience of the story that is very much like experiencing an escape room in real life.  The audience can feel like they are inside of the movie and figure out the puzzles and the riddles with our actors.”

To create the Games Master’s inventions, Robitel teamed up with production designer Edward Thomas and the rest of his department heads.  Though special effects supervisor Max Poolman says they had one common first reaction when reading the script – “How the heck are we going to do this?” – like any challenge, solutions began to present themselves.

“Each of these rooms needed everybody’s support from the very beginning and we did something unique in the prep of this movie,” says executive producer Rebecca Rivo.  “In a series of summit meetings, before the sets were designed, we brought together the director, cinematographer, production designer, visual effects and special effects supervisors to break down the script and design the production as a group.”

Poolman says, “each department had their own piece of the puzzle to put in the story so that it could work seamlessly, so before we physically started building we’d put forward our 3D modeling to Adam, Ed in production design, director of photography, Marc Spicer, and Grant Hulley in stunts.”

The sets themselves become characters in the film in their own right, says Thomas.  “All of therooms are born from the characters – each of whom have their own backstory – and each room comes with its own kill factor,” he says. “For instance, the Billiard Room is Amanda’s room, Danny’s is the Ice Room, Mike’s is the Tile Room. That was my attraction to the project, the opportunity to design a film where each of the sets have personalities and are almost the nemesis in the film.”

“Such incredible craftsmanship went into creating the sets that when we walked in, every one of us, including the crew were just in awe,” says Taylor Russell.  “We live in these rooms for a long time as actors, so you become very intimate with the space and elements that play in there. They really do take on a life of their own.”

Robitel adds, “I can’t think of another film that had sets that are so vital. The idea was that each room becomes its own new film.”

“Some of Adam’s previous films are very scary, and he is very good at creating that menacing, claustrophobic feel in the rooms themselves,” says Thomas. “This film was multi-layered because the research became about the exploration of the sets themselves: the Billiard Room was based on a 1950’s pool hall, and the Games Master’s Room was Victorian library. One room tries to crush you; one tries to burn you; one tries to drown you; the rooms themselves go on a trek themselves.  We designed the sets around the ways that a room might kill its contestants, and we really hammered the point that these rooms can really come to life.”

The characters’ journey begins in the Waiting Room.  Believing at first that they will be participating in an innocent game, the group of strangers with something in common first meet in there, not knowing that by entering that room, they have already engaged in the game.

Robitel worked closely not only with production designer Edward Thomas, but also with director of photography Marc Spicer to turn up the heat on the audience from the very outset.  “It starts out dimly lit; from there it matures so that the ceiling panels turn on, the columns turn on, then the front grill turns on, the windows close, and then the fans open up, so it literally transforms in the eyes of the audience over seven minutes,” he says.  “It throws the characters and the audience immediately into a pressure cooker situation.”

Graduating from the University of Southern California’s School of Cinematic Arts, a double major in film production and acting, Robitel recently made headlines after being tapped to direct Blumhouse’s creep-fest franchise Insidious: The Last Key (2017). The Last Key opened on January 5th to stellar domestic box office, grossing 30 million dollars on its opening weekend and more than 167 million dollars worldwide, making it the most lucrative Insidious to date.

Paramount Studios then hired Robitel to do some rewrites on Paranormal Activity: The Ghost Dimension (2015).

On the writing side, Robitel’s original supernatural thriller idea Liminal sparked a bidding war and sold to Fox 2000 with Nina Jacobson producing.

Robitel will serve as executive producer with Chris Landon writing the screenplay and directing.