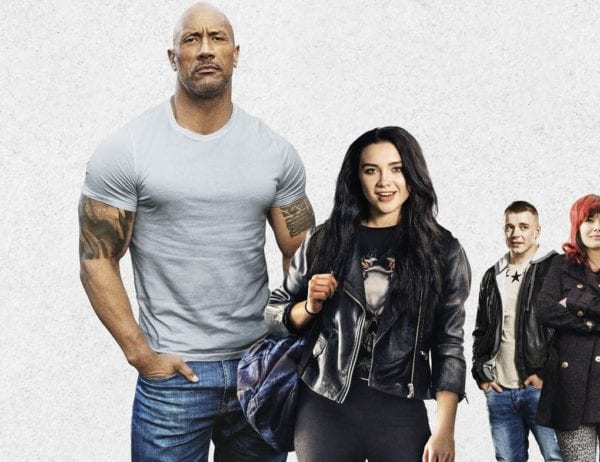 Fighting with My Family is a heartwarming comedy based on the incredible true story of WWE Superstar Paige.

Born into a tight-knit British wrestling family, Paige and her brother Zak are ecstatic when they get the once-in-a-lifetime opportunity to try out for WWE. But when only Paige earns a spot in the competitive training program, she must leave her family and face this new, cutthroat world alone. Paige’s journey pushes her to dig deep, fight for her family, and ultimately prove to the world that what makes her different is the very thing that can make her a star.

The film brings together the unique talents of producer/actor Dwayne Johnson and director/writer/producer Stephen Merchant, who celebrate a young woman’s talent, drive and tenacity as she defies the odds to climb to the top of her profession.

Interweaving a true-life drama with comedy and heart, the filmmakers explore the triumph of an indefatigable spirit who finds unlimited joy in what she does.

The story behind Fighting with My Family begins with a documentary – and an international motion picture megastar’s restless night.

In 2012, Dwayne Johnson was filming Fast and Furious 6 in London. Unable to fall asleep, Johnson turned on the television and began watching a non-fiction film produced by the U.K.’s Channel 4.

Entitled The Wrestlers: Fighting with My Family, the film followed a young woman, Saraya Bevis, who fought under thename “Paige,” and her outrageous, wrestling-obsessed family. Johnson, who founded and runs Seven Bucks Productions, a successful production company committed to making a diverse array of films and television shows, immediately recognized the potential in the documentary. “It had something special that resonated with me, and I thought it could be turned into a really compelling movie.”

Johnson’s connection to the film wasn’t surprising: like Paige, Johnson hails from a family of prominent wrestlers, including his father, grandfather and uncles, and his mother was the sport’s first female promoter. He saw elements of his own family’s dynamics – both the hardships and triumphs – in the Bevis clan.

The next day, Johnson sent the documentary to his agent, as well as to his producing partner Hiram Garcia. “It was such a random and immediate thing for Dwayne, who was up way too late on a work night when he watched this film,” says Garcia, who is an executive producer on Fighting with My Family.

“He immediately sparked to the story and thought it was something that needed to be told to a broad audience. ‘You’ve got to see this film!’ Dwayne told me. ‘I think the world will really want to experience this.’ He was really taken by Paige’s story – how she and her family loved wrestling so much, even though they were always struggling to make ends meet.”

A few months later, Johnson introduced himself to Paige at a WWE match in Arizona. He then broke some life-changing news to the young and largely untried wrestler: “I told her she was going to make her WWE debut under extraordinary circumstances,” Johnson hints with a smile.

Paige will never forget the fateful encounter: “I started sobbing uncontrollably because this was my dream becoming a reality,” she says. “Dwayne had to keep passing me tissues because I was such a mess.”

But the incredible news didn’t end with that disclosure. “Dwayne then told me that he had seen the documentary and thought it was a beautiful story that reminded him of his own family,” Paige continues, still incredulous at the sudden turn of events. “Then, he said, ‘I’m going to make a movie about it.’ And I’m, like, ‘Whaaat??’ It was all very overwhelming. Dwayne kept telling me to relax, but of course I couldn’t.”

Concurrently, producer Kevin Misher, who had worked with Johnson on The Mummy Returns, Scorpion King and The Rundown, was in contact with Johnson for tickets to a hugeWWE “Summer Slam” event in Los Angeles. As he explains: “my son, who was then eight years old, was a huge fan; we’d watch televised matches together, every week. So, I thought it’d be fun to take him to this big match, for which Dwayne was kind enough to provide tickets. When we spoke, Dwayne asked me if I knew who Paige was – and of course my son loved Paige. I was intrigued by Dwayne’s passion for the project, which reminded me of a film I had overseen the release of as a production president at Universal: Billy Elliot. It had that same kind heart and humanity.” This in turn led to Misher taking a producer role on Fighting with My Family.

That heart and humanity speaks to the film’s independent spirit, as does Johnson, Misher and Stephen Merchant’s passion for the story and characters. Wanting to maintain the project’s authenticity, the filmmakers set it up at the prestigious English company Film4, which is known for working with some of the most distinctive and innovative talent in UK and international filmmaking, and has co-financed director Yorgos Lanthimos’s current Academy Award nominated The Favourite, as well as three recent Academy Award winners: Martin McDonagh’s Three Billboards Outside Ebbing, Missouri, Steve McQueen’s 12 Years a Slave and Danny Boyle’s Slumdog Millionaire.

Fighting with My Family was also on the radar of the WWE, whose support was essentialto capturing the big arena scenes. Misher offers, “because so much of the film is about the family’s unique relationship, we felt it was important to get that right first. Asking Vince McMahon to allow a behind the scenes look at the WWE was a big ask even with Dwayne at the helm, so we wanted to make sure the film had the integrity it does before going to him.”

When Johnson decided to appear in the movie as well as produce, everything caught fire.

WWE confirmed that it would co-finance with Film4, and ultimately MGM would obtain distribution rights at the Berlin Film Festival. “Film4 allowed Dwayne, Stephen and I the time and opportunity to get it all on the page independently of any corporate agenda.” Misher continues, “Ironically, it is that spirit – present in the film – that is then what attracted everyone, particularly the WWE, to get involved later.”

The next challenge facing the filmmakers was crafting a screenplay that captured that story’s universal humanity and humor and finding a director who could bring this true-life narrative to the screen in a way that was both entertaining and faithful to Paige’s journey.

The search for the right director to helm Fighting with My Family began, in a way, with a 2010 fantasy-comedy that established a continuing friendship between two of its stars.

As Johnson relates: “I met Stephen Merchant about ten years ago on the set of Tooth Fairy. We had a blast working together and I immediately recognized his talents. I knew Stephen could understand the essence of Paige.”

Misher confirms that Merchant was the right filmmaker for the job.

“First of all, Stephen and Dwayne are an inspired creative team, and Fighting with My Family is the perfect marriage of their strong and complementary voices. Then, Stephen has a gift for wringing humor from emotion and vice versa. He is effortlessly honest about his characters and hysterically funny and can dance back and forth across that tonal spectrum.”

Merchant expands upon the origins of his involvement with the film.

“A budding young actor named Dwayne Johnson stumbled across a documentary about this real-life family,” he says with a smile. “He sent it to me and I began watching it, expecting to sneer at the family and its unusual profession. Instead, I fell in love with them, their personalities and their love of wrestling. I became so invested in their story, dreams, tensions and dynamics. Paige and her family are rough around the edges but love one another deeply.”

“It’s a real coming-of-age story in which Paige and everyone in the family must grow up. It’s also a story of ambition, obligation, sibling rivalry, missed opportunities, broken dreams, loneliness, hard work, success and triumph … involving people throwing each other around a ring. I could see why Dwayne thought it could make a great film, and we were always in sync from there.”

“Although I knew little about professional wrestling before beginning work on the film, Paige struck me as a classic movie underdog and her teenage dreams of making it in the entertainment world chimed with my own experience,” he explains. “I loved her passion and commitment to her pursuits.”

Possessing a unique comic sensibility honed through his work on the acclaimed comedy series The Office and Extras, as well as years of stand-up comedy, Merchant early on found humor in some unexpected places within the family, which in this film is referred to by its wrestling name – The Knights.

“There’s a moment in the documentary where the father, Ricky, explains his troubled past and how during his younger days, he did eight years in prison, and his wife Julia leans in and says, ‘Mainly violence.’ It was so open and forthright, but also funny, and I wanted to capture that honesty and humor in our film.”

At the same time, Merchant was intent on not treating wrestling like a joke because, he says, “the family treats it very seriously, as others would treat any other sport, or dance or music. I never wanted to undermine Paige’s passion for it.”

“What unlocked wrestling for me is the notion that it’s soap opera in spandex – a kind of theatrical experience, where the athletes tell stories with their bodies. As with Rocky, the story isn’t about what happens in the ring, but the meaning of what happens there. It’s about Paige’s dreams and hopes – and what binds her to her family through good times and bad. You need not know anything about the sport to appreciate the character’s journey.”

Adds Misher, “Stephen remains remarkably true to Paige’s real-life journey. The family incidents are pulled from real life, and even Dwayne Johnson, in his small but pivotal role, plays the role he did in Paige’s real life. He was part of Paige’s origin story and became surprisingly enmeshed in her wrestling journey (due to his interest in her family story), and provided her with advice, information and inspiration just prior to her real life first match. Art does, in Fighting with My Family, really imitate life.”