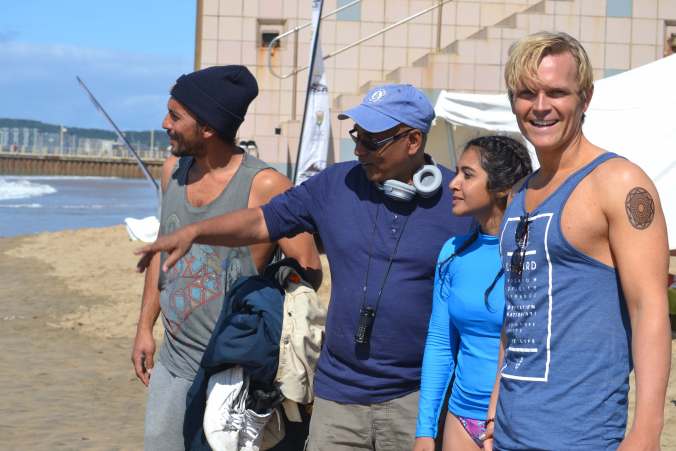 Eubulus is an award winning writer, director and producer of film and television. In Hollywood he won the prestigious Harley-Merrill Screenwriting Award. He was the founding Chairperson of the Durban Filmmakers Guild, representing filmmakers in Durban and the greater KwaZulu Natal. He trained as a director under Randy Zisk (Monk, Desperate Housewives) and Allan Arkush (Crossing Jordan, Heroes,). He has a Diploma in Directing and Cinematography from the Los Angeles City College Film School. At Los Angeles City College, Theater Academy he developed the Acting for the Camera course. Famous Alumni of the Theater Academy include Oscar winners Clint Eastwood, Morgan Freeman and Alan Arkin.

Tell me about Deep End. What inspired the story?

Deep End is about family. The idea started decades ago on the night of my sister’s wedding, on the road between Bethlemen and Bloem. My parents and I was driving back to Cape Town when suddenly my Dad cries out in the middle of the night. When I asked what was wrong, all he said was, ’Chloe is married huh!” Those words stuck in my mind and became more real when my daughter was born; the link between father and daughter. Deep End is about a father and daughter. It is also about hope and passion; tradition and change.

Deep End is about culture, relationships, family, a sense of belonging and capturing the essence of living in Durban. Tell me more about this?

I tried to deal with issues that are common and perennial. Relationships, family and a sense of belonging. But more important Deep End is about culture, capturing the essence of the ancient Gujarati culture in the twenty first century; and the extreme and sometimes dark culture of surfing. Both these cultures are strong and are an integral part of Durban. There is still a dark side to the sport. The age-old, testosterone-fuelled localism that leads regularly to fights over who “owns” the waves at a particular beach still exists. So when a group of young white female surfers see Sunitha ‘steal’ their waves it opens up a new localism that translates to women. Their fear deepens when they see their heartthrob Cory, fall for Sunitha. This leads to “surf rage” and pseudo racism.

Tell me more about the characters being exciting and energetic and are easy to relate to?

The main theme is transformation from a clash of culture and family tradition, gender expectations and the South African Indian experience.

Sunitha’s struggle for self-expression and self-fulfilment as a young Indian women in a world that was perfectly planned for her, not with malice or hate but with love in a society that sanctions conformity.

But these are universal characters we know or recognise. Their world is our world. For Deep End to work, Durban too had to be a silent but powerful character driving our characters. Deep End is about dreams and aspirations. Dreams that we think we need for ourselves and for our family. Hidden dreams, forgotten dreams and misplaced dreams.

Tell me about writing the screenplay.. how long did it take? Was the process instinctive?

Deep End took years to write. It evolved and transformed along the way. It was instinctive to start with. I wrote the original script over a very short period of time. I had given the script to so many friends and family all over the world to read. Every thought and every comment weighs into my psyche when I rewrite. I cannot remember the number of rewrites I had gone through. We have evolved and changed so drastically over the last ten years so my daughter at the age of 17, helped me to bring the story to its present day.

Was it a difficult process from page to screen? Tell me about any obstacles…

You write for a reader to read and greenlight the script. They read tons of scripts a day and you want your script to be the one. When you direct, you are there to serve the audience. To take them on a journey.  To make sure they are not distracted or bored.

Deep End is an extreme sport movie. Most of our days were spent in the water, on the water under the water, over the water and almost all the time near the water. We used up our rain safety days in the first week.

There we days that were so grey, there was no colour in the sky at all. One day we had to shot under umbrellas because we could not come back. We battled with the elements every day. Some days it was so cold, it was easier just to stay in the water and come out. When you shoot in the ocean, you very quick realise that you have no control. We are at the mercy of the elements. So we had to rethink and redesign ideas to capture the surfing every day. Some scenes were shot in 4 to 5 different locations and we had to make it seamless in the edit.

How do you see the South African film industry? How much has it changed since you started working in it?

There has been a silent transformation of the SA Film Indusry, that has the powers that be, baffled. The Minister of Arts and Culture at the SA Film Summit last month said that the film industry added more to the national GDP than tourism. That is a massive game changer that cannot and should not be ignored. Recently Durban movies are affecting the box office. More and more people are wanting to watch comedy than violence. We have to relook how we greenlight product in the future.

It is getting more and more harder to be a writer. It is a lonely profession with more failures than successes. We have a drawer of scripts and short stories that will never see the light of day. We sit in dark rooms, drink coffee, contemplate our very existence and write. Because of us there is a whole industry of actors, directors, producers etc, etc, etc. Without us here is no industry.

Can you give aspiring screenwriters 5 tips?

What excites you about being a filmmaker?

I have to always remember that audiences are sophisticated and have over a 100 years movie watching behind them. As a filmmaker I have to take them on a journey that I must believe that they will accept. And that is the exciting challenge i love. I am particular about production design and cinematography. Every element on screen is there to drive the story and not distract the audience. And audiences are so easily distracted nowadays with the cell phones in their hands during the movie.

I was very blessed to have Panavision partner with us. The amazing cameras and the Panavision lenses are the best of the best.

Tell me more about winning the prestigious Harley-Merrill Screenwriting Award in Hollywood?

Winning the prestigious Harley-Merrill Screenwriting Award in Hollywood for me was surreal. I found myself standing in the main audition of the Academy of Motion Picture Arts on Wiltshire Boulevard. Behind me is a massive statue of Oscar. Going up, saying something, people laugh, flash flash and it’s over. Hollywood taught me that you have to continually learn. That is why they are so successful. They adapt and morph to be able to be relevant as filmmakers.

What do you hope audiences will get from watching Deep End?

I hope that the audience will believe to dream again. To go back to what is it was that gave them inspiration as a child. You never too old to dream.

It was a long and difficult journey. Lots of pain, anguish and love. I would wretch when I started cutting the film. Then one day with any notice, a movie is born. And you cannot believe that it’s yours.