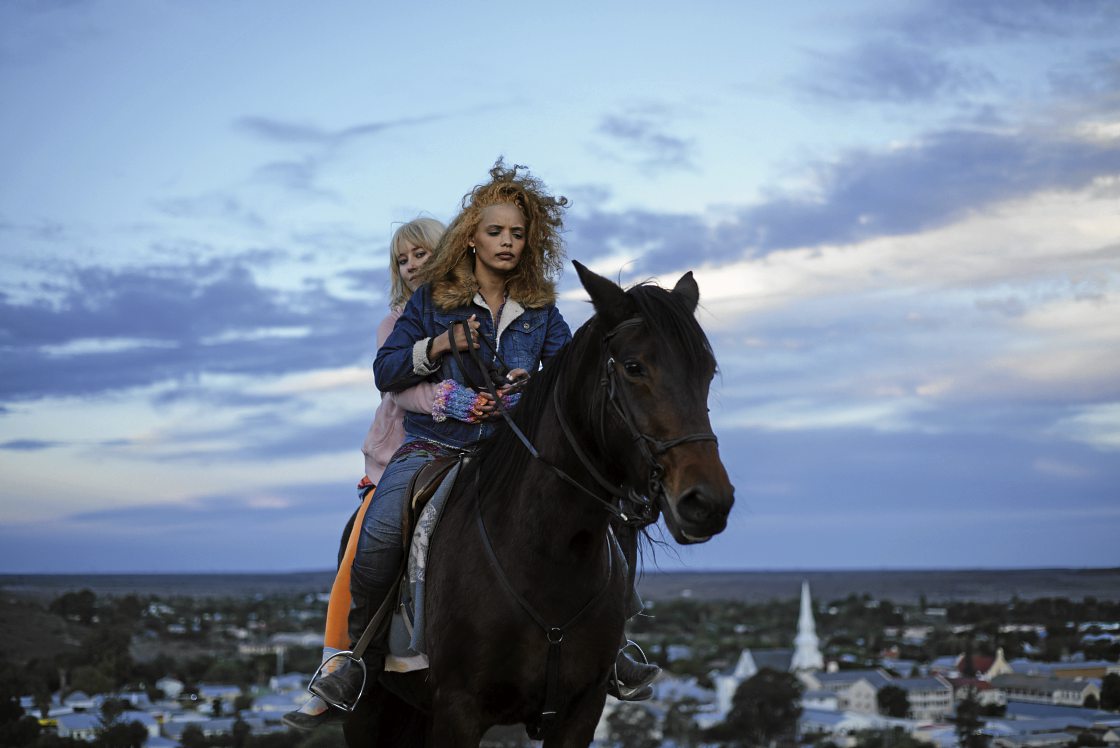 Writer-director Jenna Bass’ Flatland is a journey of self-discovery for three different but equally trapped women. It paints a vivid and unique portrait of femininity against a hostile frontier land and questions what it means to be a woman today in South Africa and the world at large.

The unique, contemporary drama is a journey of self-discovery for three different but equally trapped women – a pregnant teenager, a young bride, and a middle-aged cop – played out against the backdrop of the Karoo.

Questioning issues of race, class and gender, ‘Flatland’ is a portrait of femininity set against the backdrop of a hostile frontier land, that interrogates what it means to be a woman today – in South Africa and the world at large.

The life of a lonely, middle-aged policewoman Beauty Cuba (Faith Baloyi) changes forever when she receives a call for help from Billy, her fresh-out-of-prison former lover who has recently been re-arrested for the murder of a pastor. Beauty returns to her hometown of Beaufort West, deep in the heart of the surreal landscape of the semi-desert Karoo, and quickly learns that this case is not as simple as she had thought.

The real culprit of this accidental murder is the painfully shy, young and just-married Natalie Jonkers (Nicole Fortuin) who flees her small, rural town on horseback and teams up with her now pregnant childhood friend Poppie (Izel Bezuidenhout) to outrun the law and make their way to Johannesburg. Natalie and Poppie’s story explores an inter-class and -racial friendship (Natalie is the daughter of a black woman once employed by Poppie’s white family), as well as topical explorations of gender roles and consent, especially when it comes to Natalie’s abusive husband.

‘Flatland’ explores social rifts through a genre mashup of western, police procedural and pure kitsch. The hard-boiled detective, Beauty, for example, has a penchant for velour tracksuits and flashy sunglasses. She’s also addicted to her favourite soapie ‘Generations’, with each clip in the film featuring a lovers’ spat about infidelity. There’s also a dreamy scene in a deserted bar where the two girls do choreographed dance to Smile.dk’s Butterfly (ayayai I’m your little butterfly).

“I have long wanted to make a western set in the Karoo,” says Bass. “I love the drama, action and locations of the traditional western. The unwritten rule of westerns is, however, that they are for men and by men. ‘Flatland’ is the opposite – it’s a feminist post-western. The main characters are women, each one of them raw and authentic in their own way. In making the film, we deferred to each of the actresses and encouraged them to ‘own’ their characters. The story interrogates life in communities that exist on the margins, where there is a sense of the land returning to lawlessness, which is what made Beaufort West an ideal setting. It became its own character. The film looks at complex questions and injustices, offering no solid conclusions or happily ever-afters.”

The film had its North American premiere in the Contemporary World Cinema selection of the 2019 Toronto International Film Festival (TIFF). It also opened the Panorama section of the Berlinale Film Festival in February 2019. The film filled four theatres on its opening night and was sold out for several subsequent screenings.

‘Flatland’ was produced by South Africa’s Proper Film, with Luxembourg’s Deal Productions and Germany’s In Good Company, in co-production with Germany’s unafilm and ZDF/Das Kleine Fernsehspiel, and in cooperation with Arte. It was made in association with the National Film & Video Foundation of South Africa as well as the Hubert Bals Fund, the Berlinale World Cinema Fund and EAVE. It is distributed in South Africa by Indigenous Film Distribution.

Jenna Bass is a South African writer, filmmaker and former magician. Her award winning films include the short, ‘The Tunnel’ (2010), and the collaboratively-created features ‘Love The One You Love’ (2014) and ‘High Fantasy’ (2017), which have screened around the world, including at the Sundance, Berlinale and Toronto film festivals. Together with Wanuri Ka-hiu, Jenna co-wrote the coming-of-age romance, ‘Rafiki’, which premiered at Cannes Un Certain Regard in 2018. ‘Flatland’ is Jenna’s third feature film as a director and writer.

‘What is a Western?’ I used to think this was a simple question. True, there are tangible signifiers – horses, guns, wilderness – but I challenge anyone to prove the Western genre hasn’t transcended its colonial, American origins over the course of the past century. It seems rather a tableau upon which we can thrash out fundamental human concerns away from modern distractions, in a place where rules can be broken.

Another, not-so-simple question: ’What is a woman?’ Femininity has become equally indefinable, its old rules broken. In our times, the necessity for women’s solidarity is as great as ever, while other boundaries like race and class ensure that unity and understanding will always be complex. Then, there’s ‘What is South Africa?’ the country I live in, which has 11 official languages, countless more peoples, yet is named by its place on a map. I grew up thinking these questions were simple and it took a long time for me to realise they are not.

My original intention with ‘Flatland’ was also simple: To set a Western narrative in South Africa’s heartland of the Karoo; an endless wilderness of semi-desert dotted with small towns, boiling in summer and freezing in winter, near mythical.

On further interrogation, I realised that though I loved Westerns as much as my father did, I couldn’t identify with them. I knew Clint Eastwood would survive, but what about me? What would I do, shot at by enemies, alone? I wanted adventure for myself and for others who were ignored by these films.

Women have just as much right to be in the saddle, and I was sure that women audiences had the same desires I had, as well as the spirit to act them out. If I wanted to make a Western, I’d have to take a long, hard look at the Western and ask myself what is it about this frequently racist, misogynistic genre that I want to hold onto? Maybe the same things that make South Africa such a perfect setting for the Western are exactly what makes it so problematic. How different is our present from our colonial past? Maybe the rules of the Western itself need to be broken.

For me, the starting point was three different women, on their own terms: A lovelorn policewoman, a pregnant teenager, and a naive young bride, all of who re trapped, by circumstances, their environment and by their own misconceptions of what they must be. I soon realised that the film’s themes were inextricable.

If ‘Flatland’ were to climax with anything approaching the Western’s obligatory, final shoot-out, then it would have to be a show down not just between some men in a desert, but a battle between genre, gender and the psyche of South Africa. And so we made ‘Flatland’, a strange film about some strange people and places that can’t begin to encapsulate the whole, complicated country. Then again, these characters are no more strange than the picture-perfect images of urban wealth, smiling poverty, photogenic violence or exotic landscapes that we usually present in our national cinema.