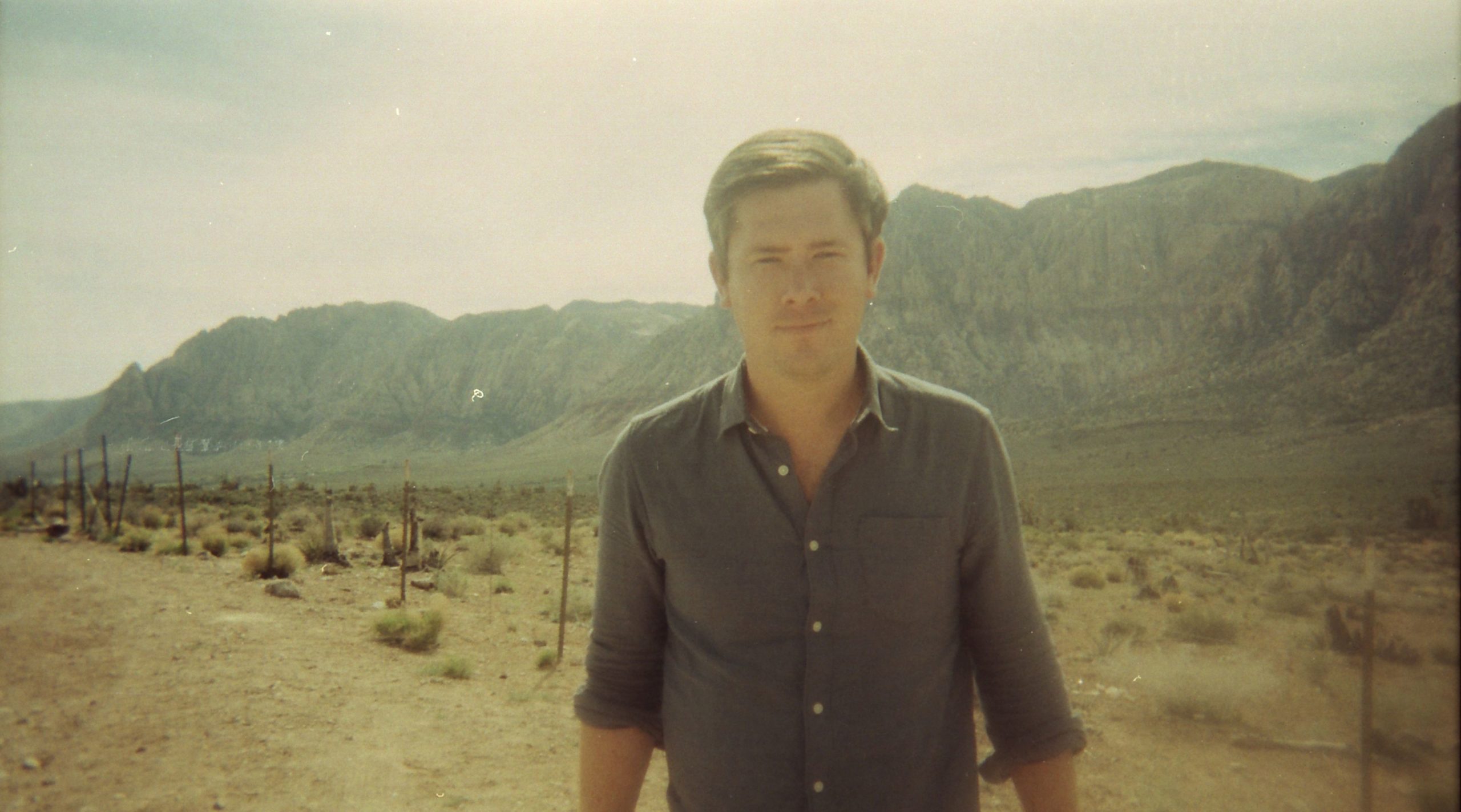 The extraordinary Wesens is a groundbreaking, first of its kind Afrikaans found-footage Sci-Fi film that subverts conventional rules and clichéd notions. This uniquely South African independent film from writer-director Derick Muller offers original storytelling that engages the intellect and provokes the imagination.

This sci-fi mystery, set in South Africa in 1967, follows four South African Republican Intelligence Agents as they investigate an unidentified object that landed on a farm in the Karoo. They record this footage with their Super 8 and 16mm cameras. What follows is a mystery that will keep you guessing until the very last line.

In 2015, he completed his MA dissertation in creative writing at the University of Cape Town and in 2016, Derick and his wife Karin Muller founded the South African art and literature journal, Ambassadeur, that featured innovative long-format fashion articles for, among others, the international fashion brand Gucci.

In 2017, he completed his master’s degree in business administration (MBA) at the University of Cape Town’s Graduate School of Business.

In 2018, he extended his MBA studies with a six-month international exchange at Yale University’s School of Management in Connecticut.

Wesens is described as a New South African Karoo Sci-Fi film, a first of its kind …

The Karoo is beautiful and offers an amazing cinematic landscape and as a result it has been featured in numerous South African films. But to my knowledge, there hasn’t been a South African film that merges the science fiction genre with this landscape. The only examples that comes to mind are books Die Hemelblom and Swart Ster oor die Karoo by the South African author, Jan Rabie.

What inspired you to write the screenplay?

Two years ago, on a weekend away in Ceres, my wife and I visited one of the local antique stores where we found an old Pentaflex 16 mm camera. Inside the camera box we also discovered a couple of old film reels. I love old cameras and ended up buying the box with everything in it.

Now I had all these old film reels from the 1960s, but we do not have a film projector, so I started thinking, imagine there is something “crazy” on these reels. Something that you cannot believe. And from there the idea started gestating.

Was it a difficult process?

The scriptwriting was very challenging, but I have a passion for writing, and I love doing research, so that made the challenge an enjoyable one. I published my first book back in 2007 and completed a master’s degree in creative writing in 2015, and I found that writing a novel is a lot more challenging than writing a screenplay. I would compare writing the screenplay to writing a novella or even a short story.

At the beginning I thought the process from page to screen will be easy. I have been doing editing for many years and therefore write the script with exact shot timings in mind. I literally “time” the shots and add the timecode and music ques to the script. But you can plan as much as you want, it is still incredibly challenging to translate that what is written into a visual medium.

Tell me about working with the actors and where you filmed Wesens?

I started my own advertising agency and production house, The Suits, in 2011 and have been working with great actors for many years. So, I actually wrote the script with some of these actors in mind, which is great, because you know how phenomenal they are and that they will be able to deliver.

We filmed, Wesens, on a farm on the Ouberg pass, more than an hour outside of Montagu. On the farm there is no electricity, no cell phone reception, no water, nothing. So, logistically it was a very challenging environment to film in. But I think, the isolation and lack of cell phone reception, ensured that all the actors where “present” and full emerged into this world.

It gives audiences a bit more than a traditional genre film.

On the surface, the film follows four South African Republican Intelligence Agents as they investigate an unidentified object that landed on a farm in the desolate Karoo landscape. They record this investigation with their Super 8 and 16mm cameras. What follows is a mystery that will keep you guessing until the very last line.

But on a deeper level Wesens is actually an allegory that subverts the clichéd notions of genre films, blurring the lines between art-house and traditional commercial cinema. The film uses multi-layered metaphors, extensively researched dialogue and long meditative shots as part of its cinematic search for the “absolute truth“.

What films and filmmakers inspired your journey?

My favourite subject at film school was Film Appreciation which Professor Martin Botha lectured. In this class we explored the history of film and the various film movements. From there I developed a love for the French New Wave filmmakers such as Jean-Luc Godard and Alain Resnais, as well as for Italian Neorealism. I am almost a huge admirer of the Swedish filmmaker Ingmar Bergman’s work.

Some of my favourite films include Hiroshima mon amour by Alain Resnais, Crin-Blanc by Albert Lamorisse and Alphaville by Jean-Luc Godard. But I am also inspired by great writers such as Antoine de Saint-Exupéry, Cormac McCarthy, John Steinbeck and Guy de Maupassant.

My wife, Karin, and I both have a passion for creating art and putting something meaningful out there in the world. It all started with the publication of our art and literature journal, Ambassadeur, in 2016. Ambassadeur was a platform through which we showcased the amazing artist and writers we have in South Africa. The only thing with print is that your reach is limited.

So, Wesens was in a way the organic next step to reach more people. And because it is our first feature film, we wanted complete creative control over the work, and as a results Wesens a self-funded, independent film.

Have you always wanted to be a filmmaker?  Where did it start for you?

Yes. A filmmaker and a writer. It all started when I was six or seven years old in Graaff-Reinet, where we lived when I was younger. My parents instilled in me a love for reading and books, and it opened up my imagination. And since then I have been writing.

I remember the first “book” I ever wrote was Die Spook van Union Dale. I wrote it when I was nine years old and it had illustration and everything. And the funny thing is, to this day the story still scares me every time I read it!

From an early age, my father also told me that you can do anything that you set your mind to, as long as you are willing to work hard for it. So, it all started at a very young age for me.

How do you see the future of the South African film industry, especially now after the COVID pandemic?

The COVID regulations have definitely had a negative impact on all aspects of the South African film industry. The key now is to re-think the traditional model of filmmaking.

I started writing the script for Wesens after I returned from my MBA international exchange at Yale University’s School of Management in Connecticut. This placed me in the fortunate position of being able to approach the creative filmmaking process from a business angle. I did a lot of research and downloaded numerous reports to understand how South African films perform in the local and international markets, and from there I worked out what my budget must be to ensure that the film will turn a profit.

Having a crew of 50 or 100 people on set is not the answer, not for a market of our size. They key is to keep it lean, to manage every expense, and to try and only allocate funds to that which will give you a return on investment.

And there are so many great, new filmmakers in South Africa that are all employing this lean methodology. So, I think the future of the South African film industry is looking bright!

Any tips for new screenwriters who would like to get their work produced.

For Wesens the found footage technique was specifically selected so that the spiritual quest of the protagonist is revealed through the “real-life” lens of South Africa in the 1960s.

What intrigues you about the found-footage genre?  Do you have a favourite?

What I love about the found footage genre is the realism it brings to filmmaking. For Wesens the found footage technique was specifically selected so that the spiritual quest of the protagonist is revealed through the “real-life” lens of South Africa in the 1960s.

I suffer from severe motion sickness, so I actually cannot watch found footage films. I remember seeing the trailer of The Blair Witch Project and thinking this is the most amazing concept ever!

Then I went to watch the film and ten minutes later I was vomiting in the bathroom. I physically cannot watch handheld footage, so to be honest I haven’t seen any found footage films, except Project Almanac by South African film director Dean Israelite and the black comedy Project X.

So, because of my motion sickness we actually filmed Wesens on tripods and gimbals.

Do you think it’s our human nature of wanting to probe impossible phenomena, to crack the code of the universe?

If you go onto social media and see what people post and share, then I do not think it is in our nature to try and probe any phenomena nor to crack any codes of the universe. But that is also fine. Everyone has their own diverse interests and things that are important to them. And that is beautiful.

Our diversity and individual uniqueness is what makes us interesting. And as long as we live with compassion and empathy for one and other, there is no need to crack the code of the universe.

Wesens, however, cracks the code…