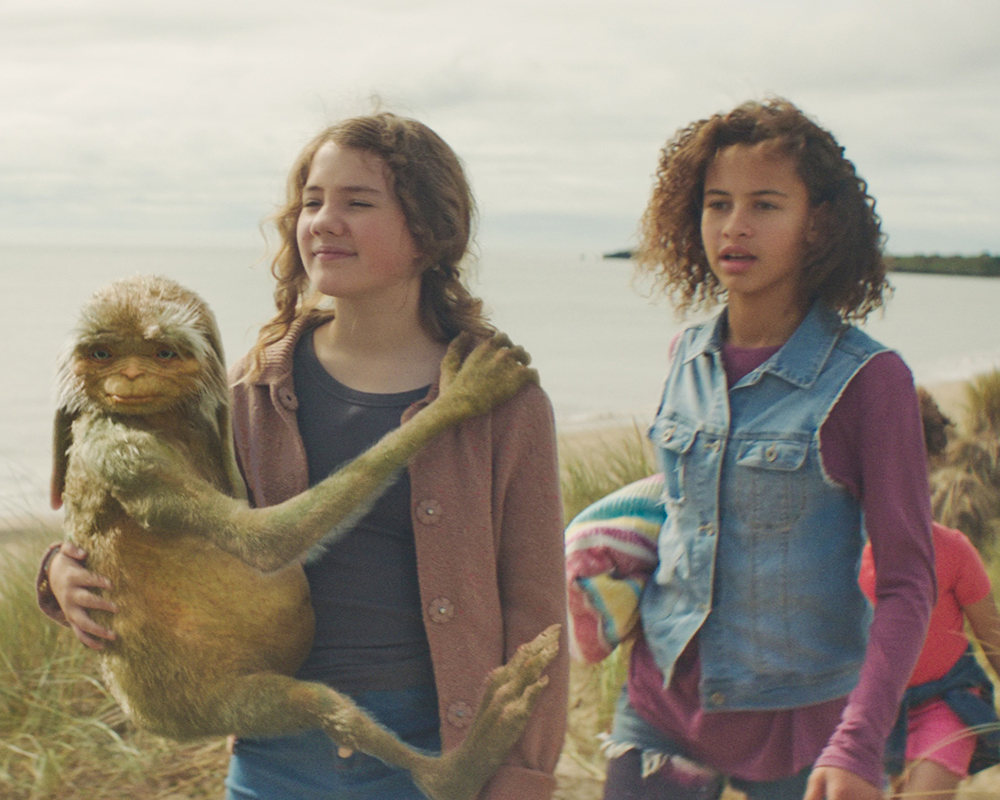 Adapted for film by screenwriter Simon Lewis, Four Kids and It takes its cue from the beloved British children’s author, Jacqueline Wilson, and her bestselling book Four Children and It, published in 2012.

In Four Kids and It, a group of everyday kids come face to face with their greatest fear when they discover that their summer vacation in the English seaside is in fact a ruse – a bonding trip with their potential future step-siblings engineered by new couple, Alice (Paula Patton), a workaholic American ex-pat, and David (Matthew Goode) a reserved Brit. Their modern-day nightmare, however, is interrupted by the discovery of an eccentric, ancient creature who lives below the sand – the Psammead (voiced by Michael Caine) – who possesses the ability to grant their every wish, with the tacit understanding that their wish will come to an end at the end of the day.

“I thought long and hard before writing it,” says Wilson, whose own book is adapted from Edith Nesbit’s Edwardian children’s classic, “Five Children and It,” published in 1902.

“I’ve always been a huge fan of hers,” says Wilson of Nesbit, a prolific author of children’s literature whose works include The Railway Children.

“I thought she wouldn’t really mind if we dug her Psammead up out of the sand and resurrected him for modern children… I tried to mirror some of the situations, but not to imitate E. Nesbit’s voice because it’s hers and very special.”

“What Jacqueline did here was to bring something new to that classic story, a modern sensibility – a single mother and father who are now dating and whose kids are all going to be put together to make a new family, irrespective of whether they want that or not. That’s a situation so many children understand. That’s what Jacqueline brought to Nesbit’s original story, and I think for me, the mixture of those two things, the classic/magical action-adventure and the contemporary sensibility that goes to the heart of the way children live today, is what’s special about it…”

“The thing I really love about all of Jacqueline’s work is that she has a such a strong instinctive understanding of the way children see the world and the way they want to explore their emotional hinterland,” explains Brogan.

“Her characters’ journeys are wish-fulfilling on the one hand, but they’re also emotionally truthful and sometimes quite tough. It’s the tough emotional element of the journeys that kids love, and that I also love in all her stories.”

“This project, for me, started about six years ago,” says Brogan’s producing partner on the project, Julie Baines (Dan Films), of the film’s genesis. “Anne had the manuscript of the Jacqueline Wilson novel before it was published, and she brought it to me and asked me to read it. When I read it, I knew it was definitely a film.”

“From that point on, we decided to work together on it,” Baines continues. “Anne is a prolific television producer, particularly in children’s television, and my experience is much more in feature films. We thought it was a good combination and so we said, ‘Let’s do it together,’ and that’s just what we’ve done. We worked together from the development of the project, right through to the end.”

To direct Four Kids and It, Brogan and Baines turned to filmmaker, Andy De Emmony. A veteran of British film and television comedy, De Emmony got his start on the hit series Spitting Image in 1993 (one of the most widely-watched shows of its day, which used puppetry to lampoon Britain’s leading political and cultural figures).

It was De Emmony’s help in the project’s early development which ultimately led to his directing Four Kids and It.

Screenwriter Simon Lewis studied art but wound up working as a guidebook researcher in China and India before becoming a full-time novelist and screenwriter.

His first novel “Go”, a travel thriller about runaways, was written in a village in the Himalayas. It was translated into six languages.

Lewis’ second novel, “Bad Traffic”, is a crime thriller about people smugglers, featuring jaded Chinese cop, Inspector Jian. The book has been published in the UK and the US and translated into German, French, Swedish, Italian, Japanese and Turkish. In 2009 it was nominated for the LA Times Book of the Year Award and for the French SNCF prize for crime fiction. A sequel will be published in 2019. The rights have been sold to an American company.

His third travel related thriller, “Border Run”, was published in April 2012 in the US, France, and the UK. The screen rights have been bought for TV.

Lewis has written many screenplays, three of which went into production in 2014. The Anomaly is a science fiction action film directed by and starring Noel Clarke; Tiger House is a home invasion thriller; Jet Trash is a travel noir based on his novel “GO” which recently received a US cinema release. Lewis has several feature projects in development with Dan Films, Films of London, and the Forge

For De Emmony, the project was right in his wheelhouse. “I’d worked quite a lot with children. I was familiar with animation, puppets, CG, comedy and emotional drama, so it was the right territory for me,” says the director.

“I’ve also got two daughters who are great Jacqueline Wilson fans, so I was familiar with the huge number of books she’s written… I simply jumped at the opportunity.”

“Jacqueline took this magical story and put it in the context of a modern dysfunctional family,” says De Emmony of the bestselling children’s book.

“That theme of ‘be careful what you wish for’ is timeless, especially when it comes to children and what they would wish for if they got the chance – anything from flying, to being rich, to being famous – all those sort of things that kids would go for. But we also use all that to coordinate a story that’s about embracing new blended-families, which I think touches a lot of people, nowadays.”

“If I could have two wishes granted that didn’t get cancelled at sunset, the first would be that this film touches people, that people go to the cinema and really enjoy it and feel like they’ve had a great experience,” says Baines. “It’s really great when you come out of a movie and go, ‘Wow that was great… I had a good laugh… I had a cry.’ I love to have a cry in the cinema and I’m really hoping people will reach for the tissues with this. So, that would be my first wish, that people respond to it,” says the producer. “Second wish? Well, of course, that would have to be: ‘Let’s make a sequel!’”

Born in Bath, Dame Jacqueline Wilson spent most of her childhood in Kingston-on Thames.

She always wanted to be a writer and wrote her first “novel” when she was nine, filling countless Woolworths’ exercise books as she grew up.

She started work as a 38 journalist for DC Thomson in Scotland where JACKIE magazine was named after her. She has been writing full time all her adult life.

Penguin Random House publish a host of books by Jacqueline Wilson including “The Story of Tracy Beaker”, which was a major children’s drama series on CBBC and resulted in a subsequent series called The Dumping Ground.

“Four Children and It” was published in 2012 as part of the Puffin Classics 30-year celebration.

Since then, eight more novels have been published. A further two will publish during 2018.

Jacqueline is one of the UK’s best-selling authors of the past decade. From 2005-2007 Jacqueline was privileged to be the Children’s Laureate, during which time she led an immensely successful campaign to encourage adults to read aloud to children long after they can read for themselves. 39 She is the Chancellor at the University of Roehampton where she is also visiting Professor of Children’s Literature. In addition, Jacqueline also holds Honorary Doctorates from Universities in Dundee, Kingston, Winchester and Bath.