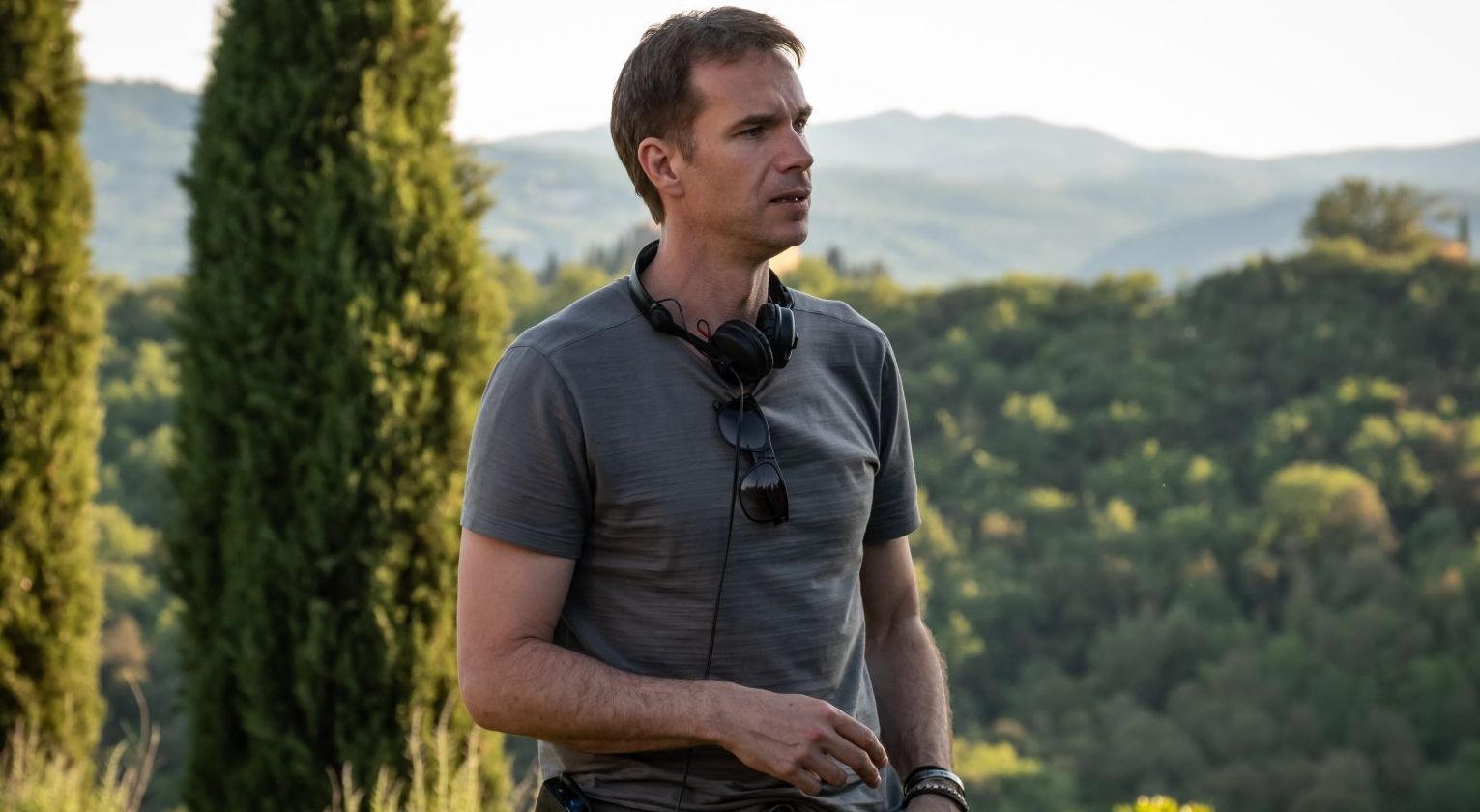 Writer-Director and actor James D’Arcy was first inspired to write the film Made In Italy whilst on holiday in Tuscany and intended to play the role of Jack, but as it took over a decade from inception to fruition.

“I grew too old for the role,” says D’Arcy “A different opportunity now arose as by this time I could see the film so clearly in my head that I couldn’t imagine anyone else directing it!”

“The film has gone through many iterations, but at the heart of it I always envisioned a love story between father and son. I hoped that by placing them in a foreign location that harboured both secrets and memories for them I’d be able to use that to my advantage in terms of cracking open the hard shells of these two stubborn characters. I felt that the glorious Tuscan location might help melt away the build-up of resentments they’d accumulated – to reveal their true love for each other.”

D’Arcy trained at the London Academy of Music & Dramatic Art and is perhaps best known for his portrayal of Edwin Jarvis in the Marvel television series Agent Carter and the 2019 film Avengers: Endgame. He also starred in the biopic Hitchcock, Madonna’s W.E., and Peter Weir’s Master and Commander: The Far Side of the World. Most recently he was seen in Christopher Nolan’s all-star cast Dunkirk and Tomas Alfredson’s The Snowman. Up next we will see James in feature film Six Minutes to Midnight

Can you briefly give us a summary of the film?

The film is really a father son redemption love story, I suppose. The father and the son, who are played in the film by Liam Neeson and his real life son, Michael Richardson. When we first meet them they’re estranged and they are obligated to go to Italy and sell an old family home, which they do with some reservation. The story is a gradual reveal of their relationships, set against this, hopefully, very beautiful Tuscan backdrop.

It certainly seems like a very personal story, are there any events in the film that are directly lifted from real life?

There is a shadow of Liam’s wife, and Michael’s mother, who has died ten years previously. By chance, this parallels what has happened in real life with Liam’s wife, obviously Natasha Richardson died and it’s very public knowledge how she died.

I wrote the script while Natasha was still alive, so it is completely by chance, but I do think it is one of the things that Liam probably tapped into when he read the script. Honestly, it could’ve gone either way. I was nervous he might get quite angry that I was being ghoulish or something about his real life. He didn’t and he saw that it wasn’t his life story and he saw it as an opportunity, perhaps, for him to investigate some of those emotions and he leapt into it. Not only did he want to work with a first time director on a pretty low budget movie, but he also suggested that there could be something in doing this with his own son that brought an extra dimension to it. So, that’s how I met Michael.

My father died when I was very young, so this script was my love letter, or fantasy love letter, to what my relationship with my father might’ve been like.

The three of us sort of had losing somebody in common and that helped us have a little shorthand, especially when we come to the more emotional scenes.

It was Liam who brought his son Michael on then?

I met Liam and he responded really well to the script and he said in that meeting, ‘look, we don’t have to do this, but would you consider meeting my son, Michael and auditioning him, because I think there could be something in there’.

And we had a long conversation about the fact that we didn’t want to do the Neeson family therapy film, we were trying to make an entertainment, which he was one hundred percent adamant about. But, he felt that there could be something between the lines, which you just couldn’t get otherwise and I was very happy to meet Michael.

When I met him, he’s such a charming young man and of course, because his real life mother has died, he has access to all of that complex emotion. And it didn’t hurt that he looks like a movie star. You know, a Richardson-Neeson, he comes from maybe the best acting stock of anybody ever. So, Liam suggested it, but in the end we could’ve gone in a different direction, but I really thought it was worth exploring and I’m glad that I did.

At the start when I read it, it was so close to us and just kind of weird how it came into our lives at the time it did. It’s been 10 years since Mum passed and I think coming from somebody who’s lost a parent at a young age… There is a line in the film where dad says, “Nobody knows how to do this”. I don’t think anybody does but when you experience something like that a lot of the time you shut down, stuff it in, which isn’t the way I think you should grieve. You have to let it out, you have to cry, you can’t push them out of your memory in any way and that’s kind of what I had done as I’m sure many people have done. So this process I hope and I feel it has been chipping away at parts of me that I kind of locked down.

“I had done a few things with Dad before—I was in Cold Pursuit with him very briefly. There was a part of me that was thinking, ‘Okay, I maybe want to distance myself from working with Dad again.’ I don’t, at the start of my career, want be tied with the idea of ‘Oh, here’s Liam Neeson getting his son a role again.’ It can easily come across like that. But what are you going to do when a script like this comes around? It’s so close to home and the parallels between the story and our life are so personal. And, at the end of the day, how lucky am I to even be considered for the lead in a film?”

They’re both great in it, it’s pretty powerhouse.

Having Michael on set brought out something in Liam that I feel like I haven’t seen in a film, ever. There’s a lightness to Liam that I don’t remember seeing. Obviously, more recently, he’s become successful in the genre of action films, but even before that, I don’t remember seeing Liam smile in movies and when he did, I was like ‘oh my God, wow’. It’s really amazing.

You wanted to play the role of Jack back when you first had the idea. Is that correct?

When I first had the idea, it was over a decade ago. What I did was that I wrote the script, I did two or three drafts over the course of a year and then I just couldn’t get it going. And it just sat around for a really long time.

Then I directed a short film, which I massively enjoyed. It’s called Chicken/Egg, it’s on YouTube. I really enjoyed doing that and the guy who had produced it, Sam Tipper-Hale, read this script and said ‘this would be a great first feature, it’s not expensive and it’s a real character piece and I think we have a chance to get it going, why don’t we work on it a little bit?’

Which we did, with Pippa Cross, who was my other producer, and the truth is, these small films, at this point you have to go one of two ways if you’re a first time director. You either need the backing of a streamer who will take a punt on a first time director, or you need an A-list star who will come and take a massive pay cut and who will trust you.

It’s a great story about family and love… And compassion and loss – and humour… I found it very cathartic in dealing with my own grief…. And to do that through one’s art, ie making film, was very, very unique and special. Sometimes when you’re acting scenes and stuff of course you’re surrounded by crew and sometimes it’s 40-50 people but I always felt they were holding us up, you know, I mean like really supporting us because they were into the story and they wanted to tell the story. They weren’t just clocking in for another job, I just felt that real camaraderie.

With Tuscany itself, it’s pretty significant to the story. Was its connection to art, ie, Leonardo da Vinci, was that a deliberate choice in placing your characters very much in the world of art. Was that intentional?

The art angle probably came a bit later in the writing of the script. I knew I wanted to do something about a father and son and I knew I wanted to set it in Tuscany, because the first embryonic idea had come to when I was on holiday in Tuscany. But then, it followed. It made sense to me that the Robert character, Liam’s character, was an artist in Tuscany. It makes a lot of sense because it’s obviously and extremely creative part of the world. So, yes, it just sort of all fell together that way, I guess.

The Producers on filming in Italy for Made in Italy

Finding the bricks and mortar of a house that you have spent so long writing/reading about is of course harder than you think. With James, we made repeated visits to various parts of Tuscany, often at times of year when the views were so very different to how they would be for our hoped-for Spring shoot.

Finally, the wonderfully well-connected Tuscan location manager Leonardo Semplici showed us the house we had all been seeing in our heads. We returned with DOP Mike Eley and Production Designer Stevie Herbert and had the immense good fortune to spend a few days actually living in ‘our’ house, with James and Mike already able to start planning shots, and Stevie slowly grappling with the task of taking the very attractively finished house back to a state of extreme dilapidation for the start of the story. Leonardo even cooked for us – a wonderful selection of local recipes!

Once we’d found the house, we set out to look for the other locations we needed and again we were fortunate to be welcomed by the beautiful village of Monticchiello.

The local tourist office not only allowed us to use their community restaurant, they also helped us do what they sometimes do themselves and hold a film screening in the village square. The partnership with our co-producers Indiana was a vital one and we couldn’t have been happier with the crew they put together to work with our UK travelling crew. It was indeed Spring, but as we battled inclement weather and waited for the sun to shine, everyone went above and beyond, and we hope that no-one will ever notice!