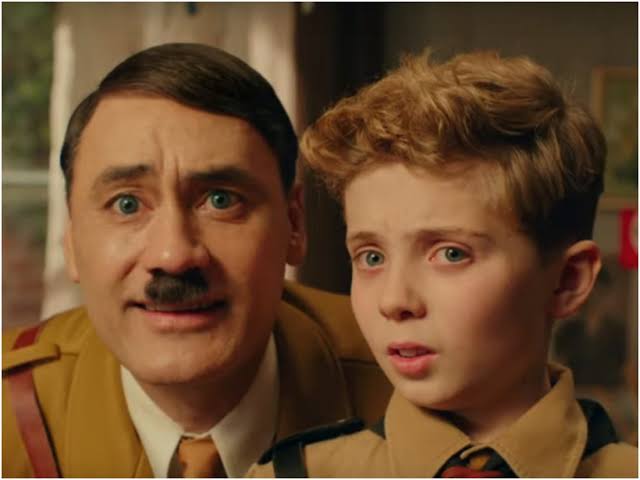 On a soundstage just outside Prague in the Czech Republic, at a facility that was long ago used by the Nazi Party to make propaganda movies, a New Zealander dressed as Adolf Hitler is in full flow, delivering an unhinged speech that has the film set riveted.  This is Taika Waititi, writer-director of the astounding Jojo Rabbit, portraying the Nazi leader as the imaginary best friend of a 10-year-old boy, but there is something different about the invective being delivered in take after take.

In one moment, all of a sudden, Waititi’s imaginary Hitler takes an about turn, and starts a diatribe about possums. It’s not in the script; a spontaneous moment of Waititian improv that gets iterated upon with every new take.

This is the l world of Waititi’s Jojo Rabbit, a hilarious and heartfelt “anti-hate satire” that punctures the twisted beliefs that led to the Second World War while, at the same time, telling a deeply human tale about the victims of that conflict. But, for now, Waititi is just struggling to stay on track with his speech.

“It’s one of the problems with directing and also being in my films,” he sighs with a smile on a break from filming. “With this one, I keep forgetting how big the part is, and all the monologues I’d written for myself.”

What became Jojo Rabbit started a decade earlier, when Waititi’s mother called him up about a book she had read, Caging Skies by Christine Leunens.

“The way she described it, it felt like something that could be cinematic and would make a good movie,” Waititi recalls. “I went and read the book, and it was very good and there were a lot of great elements to it. But I think I ultimately found my mum’s vision of the book – her retelling of the story – had inspired something very different in my mind.”

The movie he saw as his mother recounted her experience with the book is, then, a hybrid between Leunens’s source material and Waititi’s unique vision.

While the book also follows the story of a young boy in the Hitler Youth – Jojo Betzler – as he discovers that his mother is harbouring Elsa, a Jewish girl, in their attic to keep her safe from the Holocaust, for the movie, Waititi has added Hitler as Jojo’s imaginary best friend, and brought his own comedic tone to bear.

And while it might be on a more intimate scale than Waititi’s last film – his first outing in the Marvel universe with Thor: Ragnarok – the film reflects subject matter Waititi has been examining his entire directorial career. In films like Boy and Hunt For The Wilderpeople, Waititi has cast his gaze on childhood and the way innocence can be robbed – or outright denied – by adults.

“His films, I think, remind adults what it was like to see the world through the eyes of a child,” says Carthew Neal. “He often wants to think about how we bring up kids, and the world we bring them up in.”

Jojo represents a common experience for children raised under the Nazi regime. He believes in the Nazi ideology, because it is what the grown-ups around him tell him to believe. “There were 8 or 9 million of them that were indoctrinated into this sort of world,” says Neal. “That’s why we’re making the film. For all the craziness of the comedy, it’s awful to think these innocent kids were so passionate about something that was completely wrong and bad.”

He continues: “Yes, it’s scary. But it’s also tragic and heart-breaking. Just the thought of one of my daughters going into one of these programs and not listening to me, or not loving me, and preferring someone else over me… That’s heart-breaking. And it’s really frightening. So, to me, I don’t think it’s as clear cut as, ‘Well, they were Nazis who believed in the ideology.’ They were kids.”

Waititi’s film radiate warmth and heart, alongside comedy. He describes his output as “drama with jokes,” rather than out-and-out comedy. “I don’t feel like I would want to make comedy that was without meaning. I definitely find that I look at a lot of the same themes in my films. Kids who don’t have dads. I think what you’ve touched on is I’m keen on trying to get back to my childhood. Regaining that innocence and just trying to get a healthy grip on that.”

With the film resting on the shoulders of the 10-year-old Jojo, finding the right young boy to take on the role was the key to making Jojo Rabbit work.

The production scoured the globe, looking at kids in the UK, Canada, America, New Zealand and Australia. “It was interesting because we noticed the British, Kiwi and Australian kids had a different sensibility to the North American kids,” notes Neal.

The production would eventually alight on Roman Griffin Davis, a British boy living in Los Angeles with his parents.

A consequence of following the perspective of a 10-year-old, who believes, at least initially, that he is living through a prosperous time in his country’s history, is that Jojo Rabbit was designed to look very different from what has come before. “I wouldn’t want to make a World War II movie like anything else I’d seen,” Waititi says.

“The key to the visuals is that everything in the movie is from the point of view of a complete innocent,” notes Costume Designer Mayes C. Rubeo, who reunites with Waititi after collaborating on Thor: Ragnarok. “We remember our childhoods as a place of colours, and that was the approach we gave it.”

Echoes another frequent Waititi collaborator, Production Designer Ra Vincent (What We Do In The Shadows, Thor: Ragnarok), “We talked about the vibrancy of the world we would like to create. I liked the notion that we can experience the era without the desaturated historical footage we’re used to, or how the period has been represented before. The thing about that time in Europe was it was super-stylish.”

Another element of the design that hewed close to historical fact were the Nazi and Hitler Youth uniforms worn by the cast. “We had reference and needed to be accurate there,” notes Rubeo. “There are so many people out there who know.”

Rubeo and her team designed three different looks for Waititi’s imaginary Hitler. The first was Hitler at his most “charming and eloquent”, Rubeo says, when he is indoctrinating Jojo at his most trusting. Once he has built that level of commitment, he wears, “the most official uniform Hitler ever wore, almost like full regalia,” adds Rubeo. Finally, as Jojo gets to know Elsa better, and sees the damage wrought by the Third Reich, Hitler’s costume starts to come apart. It is the moment of imaginary Hitler’s downfall.

“Hugo Boss, you know, did a lot of these designs,” says Waititi of the Hitler costume he is wearing today. “They were well made; they didn’t skim. Only the finest, gross, mustard-coloured suits for the top man.”

The humour in the film is drawn from Waititi’s own upbringing; the same humour that has shaped his films, and a wave of New Zealand cinema and television, for the past decade.

Growing up in New Zealand, he says, he watched a steady diet of comedy from both Britain and the United States.

A boy in New Zealand, he went through a phase of obsessively drawing swastikas all over his notebooks. He knew what Nazis were and what the symbol represented, he says. “But you tell a kid they’re not allowed to do something, that it’s the worst thing to do, and they automatically want to do it.” The transgressive thrill was usually fleeting, he admits. “I’d instantly feel really guilty and turn it into a window.”

“I think that combination has made it possible to develop the style of storytelling that defines us,” he says. “Hopefully it’s genuinely funny and smart in the way that comes from England. And hopefully it’s entertaining in a way that you’re trying to make something that’s popular and that the most people will see, which comes from America.”

“I just love his sense of humour,” agrees McKenzie. “Some of the humour in Jojo Rabbit is quite brutal and honest; it doesn’t tiptoe around the subject matter. It gets right to it, and that’s what makes it so effective, in Taika’s really smart way.”

In Waititi’s hands, the comedy provides an access point to talk about something he cares deeply about. Jojo Rabbit may have been developed over a decade, but as the world has turned, its relevance has become ever more striking.

“I hope people feel warm-hearted as they walk out of the film,” Neal says. “I hope they’ll think a little bit about what is happening in the world around them now, and how it relates to what happened in the past. You come away thinking about your children too. What kind of world are we making for them and how are we setting them up for life?”

Returning to the central theme of the film, Waititi summarises: “Jojo Rabbit is a movie about love and acceptance. There are kids the world over that get programmed in the ideologies of adults, because kids are very easy to program. I think what’s cool about Jojo’s journey is that he’s able – through his influences, but also through his own will and what he experiences – to deepen himself and escape.”